Gabrielle “Coco” Chanel (1883-1971) distinguished her design aesthetic through a strict insistence on comfortable, lightweight garments and a pared-down silhouette. Chanel’s interest in simplicity is seen in her earliest millinery designs from the 1910s, which relied on a single, dramatic embellishment for decoration rather than the “assemblage of materials” then in vogue.1 This interest in “less is more” also demonstrated itself in her earliest garment designs, ready-made suits and dresses often made from inexpensive wool jersey. These garments, almost the exact opposite of popular feminine fashions, launched Chanel’s career. Throughout her career, Chanel adhered to the basic principle of crafting soft, lightweight fabrics into functional (yet luxurious) garments.

Though Chanel produced a variety of garment types throughout her career, one that reappeared over and over was the suit. Borrowing from menswear, Chanel created a feminine suit which offered ease of movement and capitalized on the implication of power inherent in the masculine suit. The basic, stripped down silhouette remained consistent, but the textiles changed with the times. It became a classic and functions today as shorthand for the designer herself.

This Chanel suit dates from what has been called Chanel’s “second comeback.” Chanel closed her couture house during World War II and didn’t reopen until 1953. Her first few “comeback” collections were not well-received, probably because Christian Dior’s New Look silhouette was prevalent. Chanel persevered, however, and by 1958-59 her aesthetic regained popularity. Her suits were particularly appealing to American women, who embraced them as luxurious sportswear. Stylistically, the Chanel suits of the 1950s and 1960s were very similar to those she designed in the 1930s. 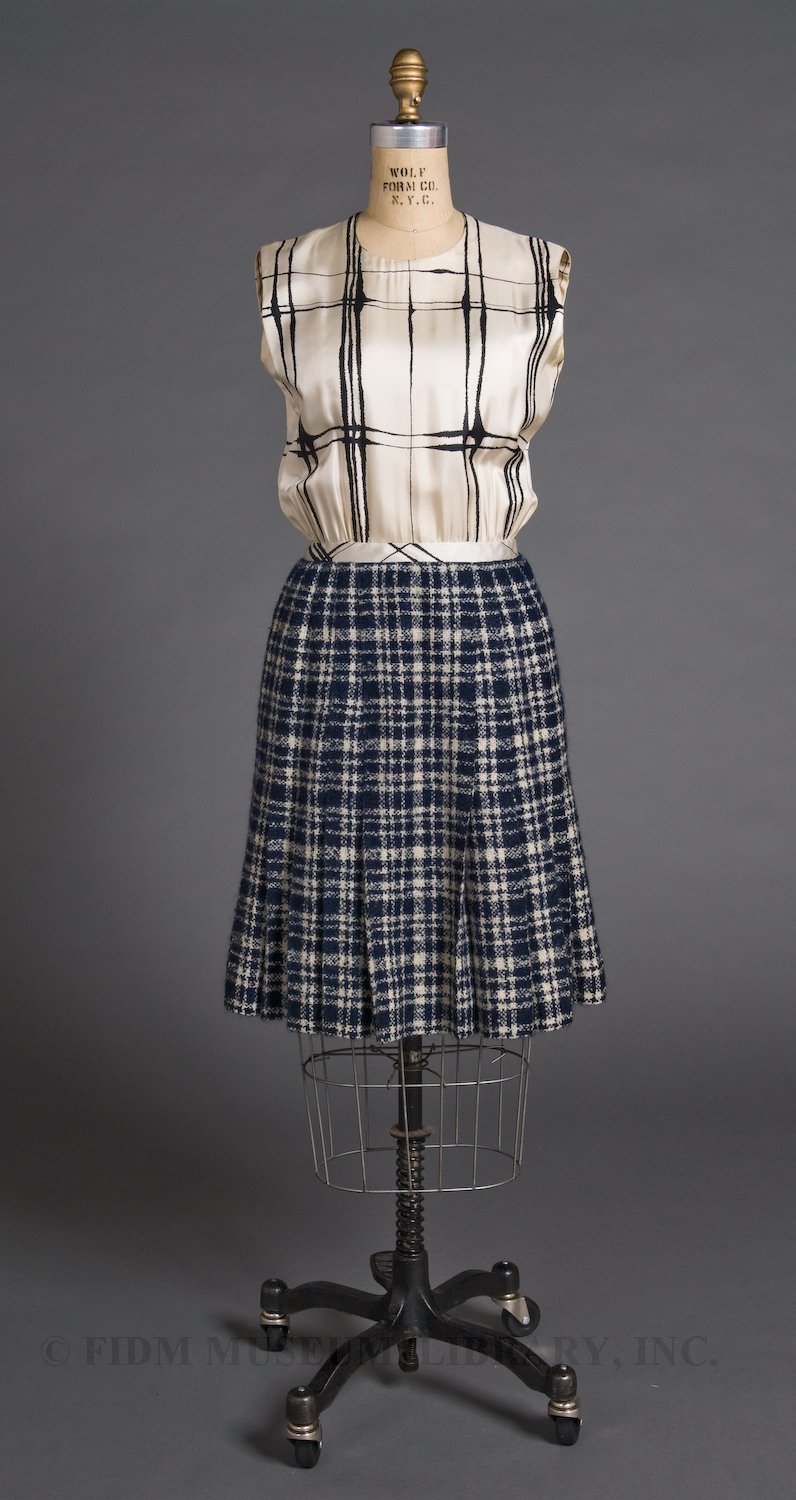 Chanel’s Spring 1964 collection was lauded for the way in which it blended sophistication with youthful appeal. All garments in this collection were cut with a high armhole and smaller shoulder, giving the overall impression of a small frame. The models resembled schoolgirls, with straight cut bangs and large white bows tied around their ponytails. Pleated, swingy skirts were similar to those worn by schoolgirls.

As always, the Spring 1964 featured the careful finish for which Chanel was renowned. Suit jackets were fully lined and lightly quilted in place to prevent sagging. The lining was usually made of the blouse fabric, creating a sense of overall cohesion. In the FIDM Museum Chanel suit, the inside lining spills over to the jacket lapels. A gold chain is stitched along the inner hem of the jacket, giving it additional weight. Gold chains are a very famous aspect of Chanel’s aesthetic, one that is often referenced by Karl Lagerfeld, the current designer for Chanel.

One response to “Coco Chanel”