Alexander McQueen, you will be missed.

Alexander McQueen, you will be missed.

All of us at the FIDM Museum were saddened and shocked to learn of Alexander McQueen’s death. Such a tremendous loss of creative talent is difficult to comprehend. McQueen’s aesthetic was provocative and never shy of pushing limits. Individual garments (recent examples include “armadillo” shoes and bone patterned suits) were provocative, as were the narratives that inspired each collection. In addition to his creative abilities, McQueen was a master of his craft, with many calling him the finest woman’s tailor of his generation. For anyone who questions the impact of a provocative designer on everyday dress, take a look at the jeans you’re probably wearing right now. If they’re low-waisted, you have Alexander McQueen to thank, as he first introduced the low-cut “bumster” trouser in the mid-nineties.

In looking at the Alexander McQueen garments in the FIDM Museum collection, an interest in certain aspects of the natural world is apparent. Playful and decorative, this pair of blue and black butterfly embellished high-heeled mules appear fairly harmless from above. Looking beyond the obvious, the metal tipped spike heel signals danger, protection or perhaps both. This juxtaposition links beauty and danger in a way that indicates an appropriately wary view of the natural world.

The butterfly depicted is perhaps the legendary blue morpho, an
iridescent blue/green butterfly native to Mexico, Central and South America. Like many creatures, its native habitat is endangered by deforestation.This reference would be consistent with McQueen’s aesthetic, which often explores issues related to threat, decay and mortality. 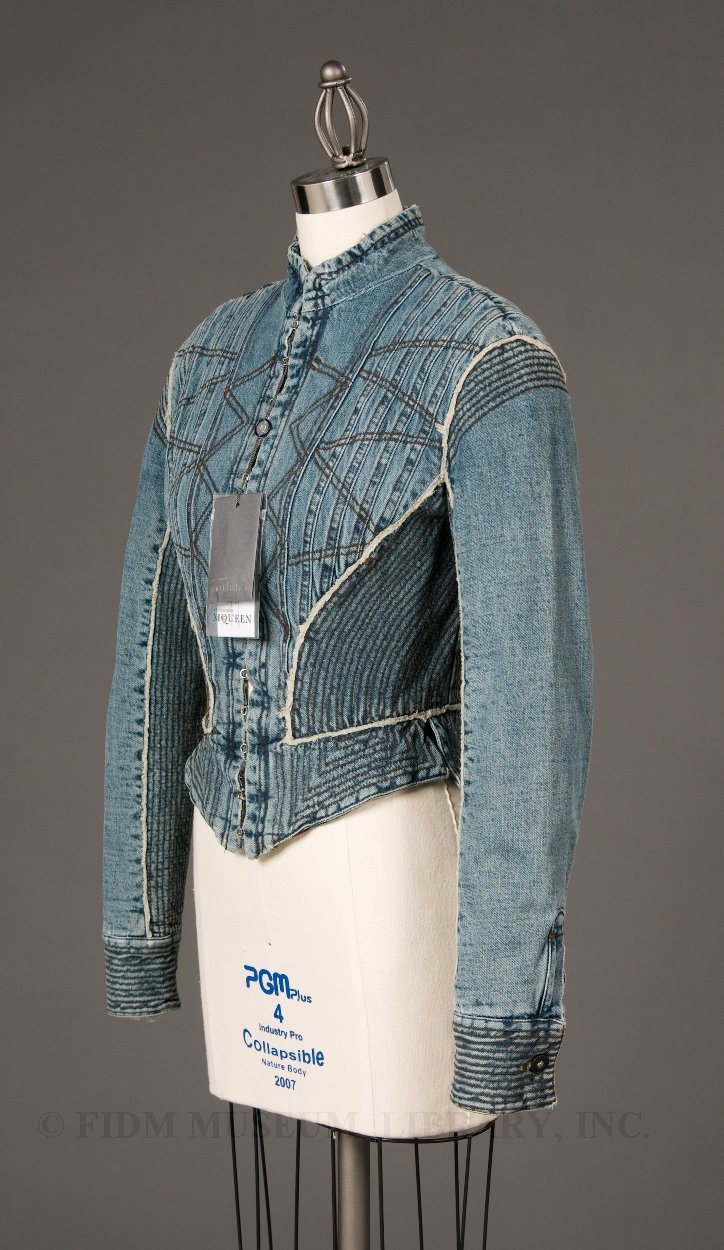 McQueen’s Fall 2002 show opened with a purple-clad version of Little Red Riding Hood leading two fluffy dogs down the runway. Subsequent outfits were carefully tailored, in shades of brown, tan or denim blue with leather accents. All ensembles resembled a hybrid of aristocratic hunting garb and stylized military uniforms. Cut in the style of a 17th century doublet, this particular denim jacket was shown on the runway with a minimal brown leather bustier worn over the jacket. You can view the complete collection here.

Though constructed from soft denim, the rigid structure and weathered appearance of this jacket suggest another of McQueen’s preoccupations: armour and protection. His 1996 S/S collection “The Hunger” featured models in clear, molded plastic bodices with squirming, worm-like fibers sandwiched between the layers. Early in his career, McQueen collaborated with jewelry designers to create spiky and unusual armour-like facial and body jewelry. Most recently, McQueen’s Fall 2010 menswear collection featured a variety of masks and hoods. All of these creations suggest that, in addition to its many other roles, fashion can serve as protection against the dangers of the world.

McQueen’s interests in armour and the natural world collide in this patchwork suit from from S/S 2004. The suit is a masterwork of construction, with its subtle patterning resembling the protective shell of an insect. You can read a more detailed interpretation of this suit (and see additional images) here, in a previous post on our blog. 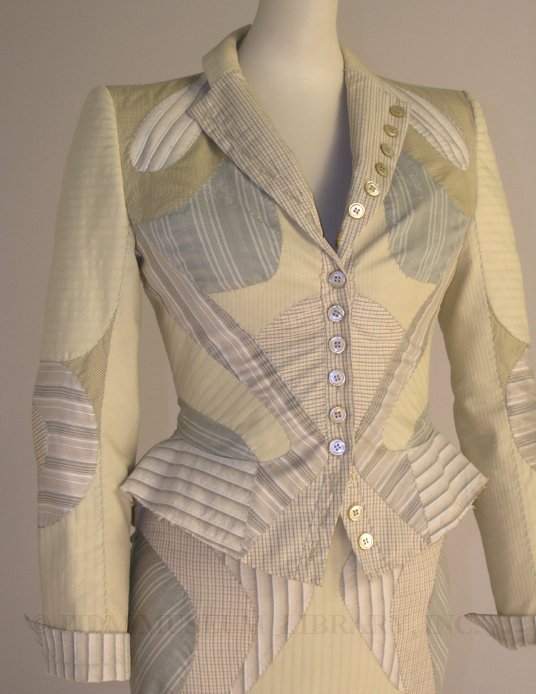