A traveling duster is a loose fitting outer garment worn to shield clothing from the dirt, dust and grime of travel. Though protective outer garments have been used for centuries to shield workers from the hazards of their trade, traveling dusters are unique in their association with the luxury of rapid travel. Within the United States, references to traveling dusters seem to have increased in the mid 19th century, just as train tracks were spreading throughout the United States.1 Nineteenth-century passenger and freight trains were powered by steam engines, which were fueled by burning coal or wood. The resulting smoke and ash entered the passenger cars through open windows, along with dust generated by the movement of the train along the tracks. All in all, nineteenth-century train travel was a fairly dirty business. It's no wonder that dust and dirt repellent traveling dusters were worn by many train passengers. 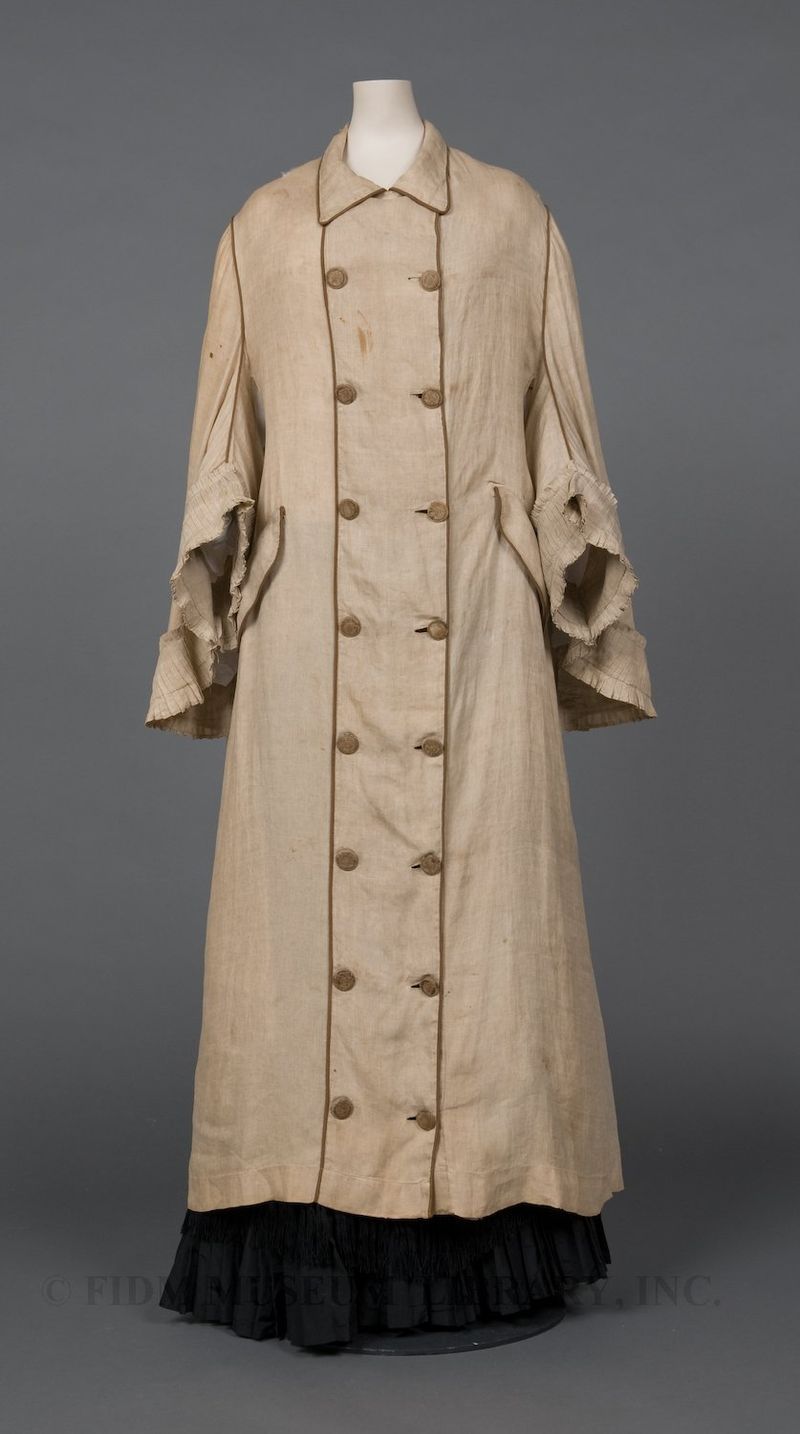 The most notable characteristic of this unlined linen duster is its dull color. Dusters were typically made of tan, putty, ecru or other plain colored fabrics, which would hide dirt and dust better than bright colors or patterns. Fiber choice was also an important factor, as some fibers shed dirt more easily than others. Linen was a popular choice, as was alpaca or mohair. This duster buttons to the neck and has a cape-like panel which could be pulled over the sleeves to provide cocoon-like protection from the hazards of rail travel. The brown piping, buttons and pleated linen trim at the cuffs provide the only decoration on this otherwise unrelievedly plain garment. Compare the characteristics of this duster to a much livelier maroon and purple dress from slightly earlier in the same decade. 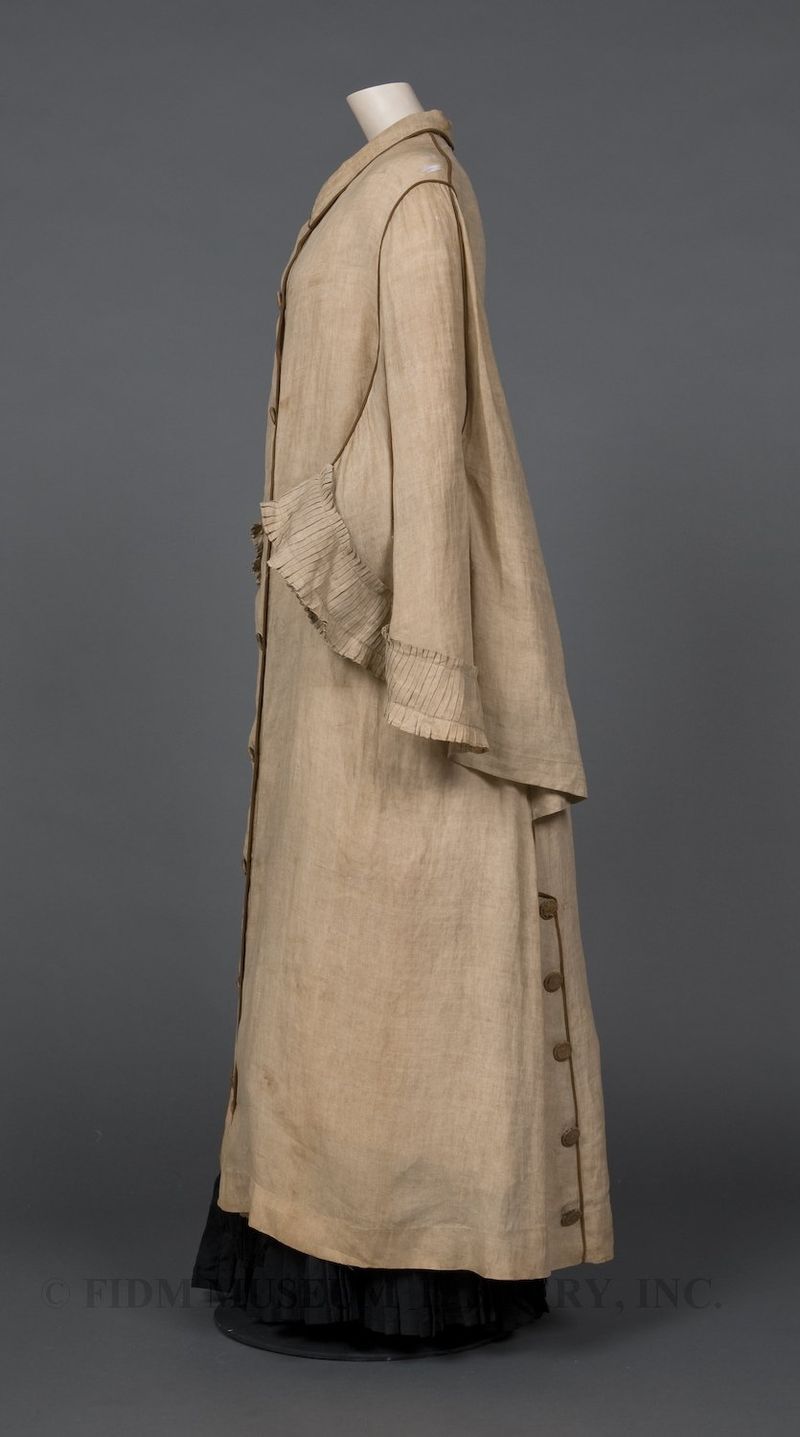 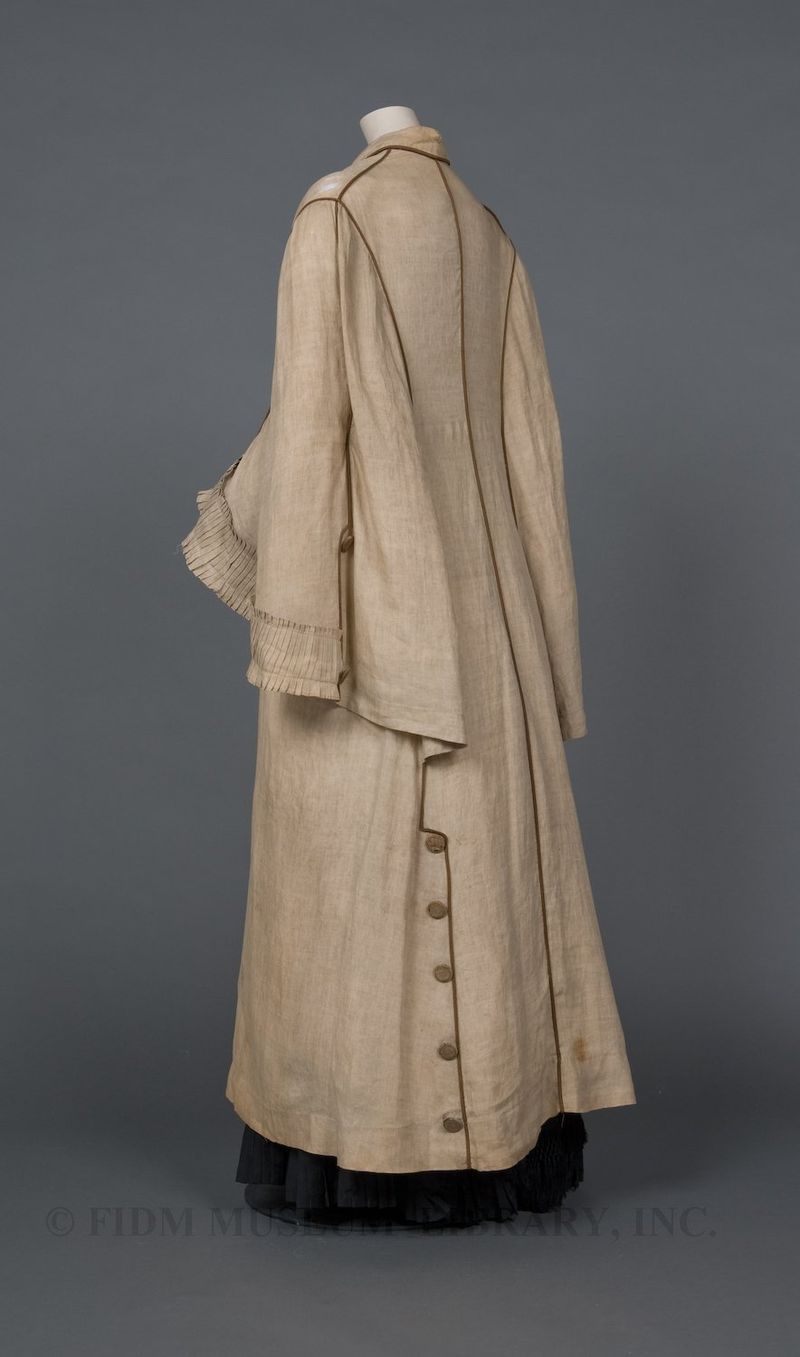 The widespread adoption of dusters may have also been linked to changing standards of cleanliness and hygiene.2 Bathing as we know it today, i.e. fully submerging oneself in a tub of water or the modern equivalent, showering, was almost non-existent in the early 19th century. Sponge baths, or washing of only the hands and face was generally the norm. As the 19th century progressed, however, "personal cleanliness ranked as a mark of moral superiority and dirtiness as a sign of degradation" among the middle and upper classes.3 This new-found interest in cleanliness spurred the production and retail of bathing-related products, including wash tubs, sinks, soap, towels and perhaps, the traveling duster.

Dusters maintained their relevance even when cars began to replace trains as the most popular mode of travel. When the first automobiles were introduced in the 1880s, they were luxuriously appointed, but open to the elements. As they had no roof or sides, passengers and drivers were exposed to wind, rain and the dirt of the road. At first, roads were simply dirt wagon tracks, dusty in dry conditions and muddy after rain. Breakdowns were common and mechanics few and far between, so automobile owners had to be able to make their own repairs. Like train passengers, automobile passengers and drivers, or operators as they were first called, adopted traveling dusters to protect their garments during travel and the occasional repair.

This first generation of automobiles were created by and for the wealthiest elite. Many of these early manufacturers are still recognizable today, including Benz, Peugeot and Renault. Given the already established link between cleanliness and social status, dusters would have continued to serve the dual purpose of maintaining cleanliness and social standing for wealthy drivers. Furthermore, as open automobiles meant public visibility, it was essential to maintain a suitable public presence when motoring. 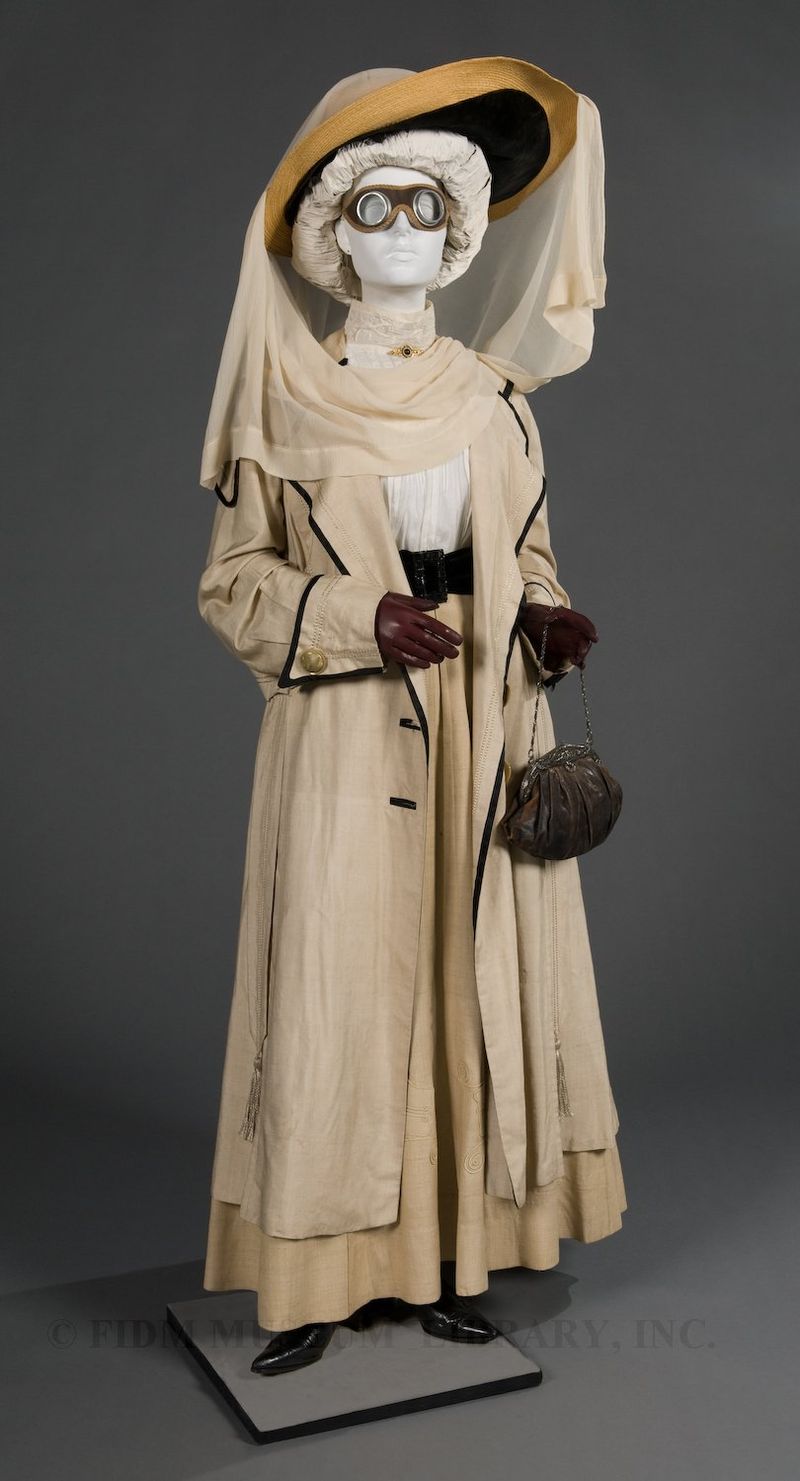 Like its 19th century counterpart, this early 20th century duster is a plain garment with only a modest amount of trim. A 1913 article titled Dusters Abound to Save Milady's Frock, noted that "color in dusters does not permit of a very wide latitude. They must adhere closely to some shade which does not show the marks of the road."4 Additional protective garments, including a hat and goggles, are also worn. Because windshields didn't shield the face from flying debris, goggles were an essential element of the motorists' wardrobe. Hats, hoods, caps or veils were also necessary, as they kept the hair from flying astray. As seen here, many women wore a hat and then secured the hat with a large scarf. When the car was in motion, the scarf would have been tied tightly around the hat and hair. The 1927 scarf-related accident which killed dancer Isadora Duncan illustrates the worst case scenario of what could happen when a scarf was not anchored securely while motoring. 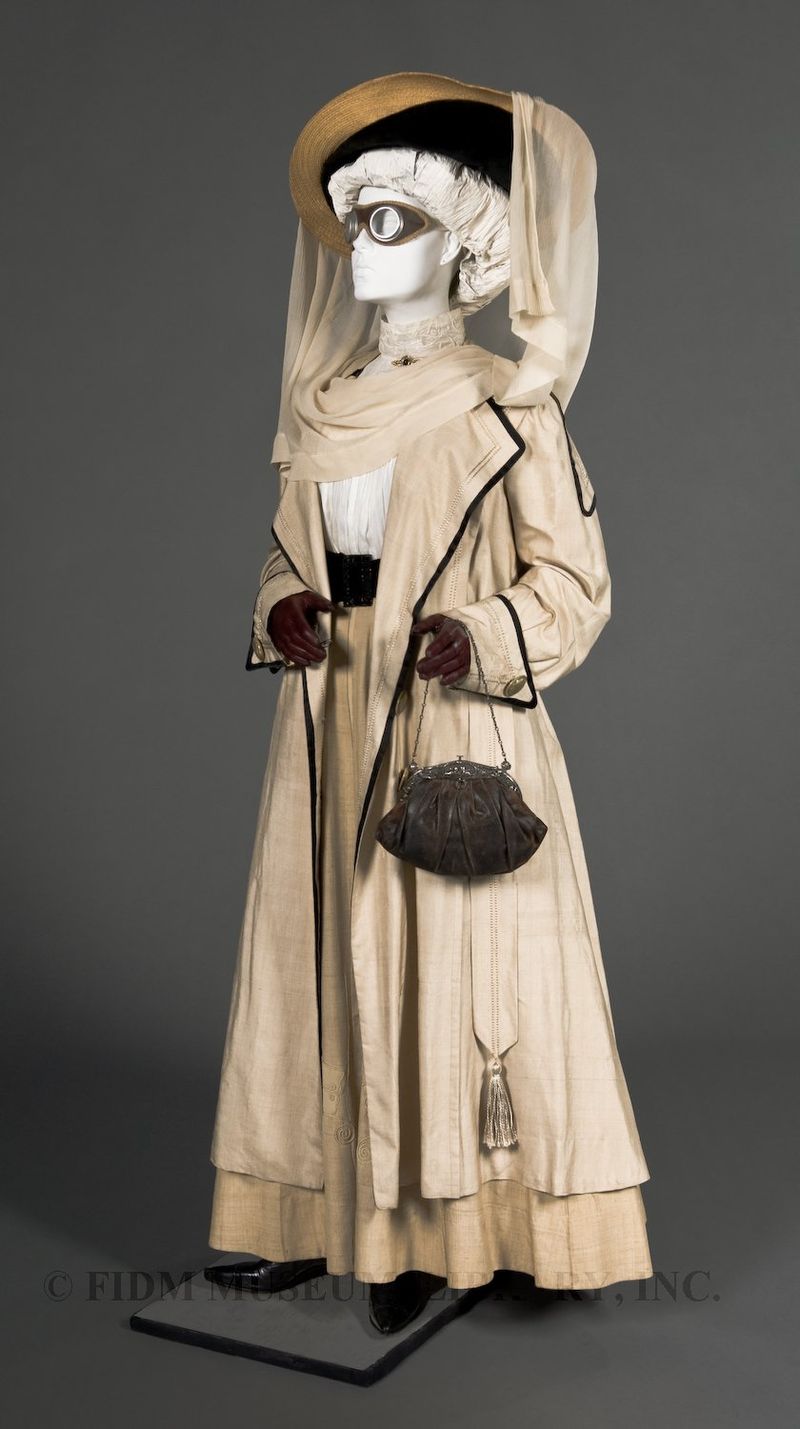 Rather than practical and quick transportation, motoring in the early 20th century was largely a recreational activity. As automobiles became more affordable, many women became long-distance motorists, embracing the freedom of the road along with the responsibility of maintaining an automobile. A mini-genre of books emerged, focused on issues related to woman and the automobile. One of the most popular books in this genre was written in 1908 by Miss Dorothy Levitt , a British auto racer and motorist. You can read her book, The Woman and the Car: A Chatty Handbook here. Make sure to read chapter 2, which is entirely devoted to practical dress for women motorists.

1 Described in Shelly Foote's unpublished presentation on the history of 19th century dusters, first presented at the Costume Society of America Symposium, 2009.