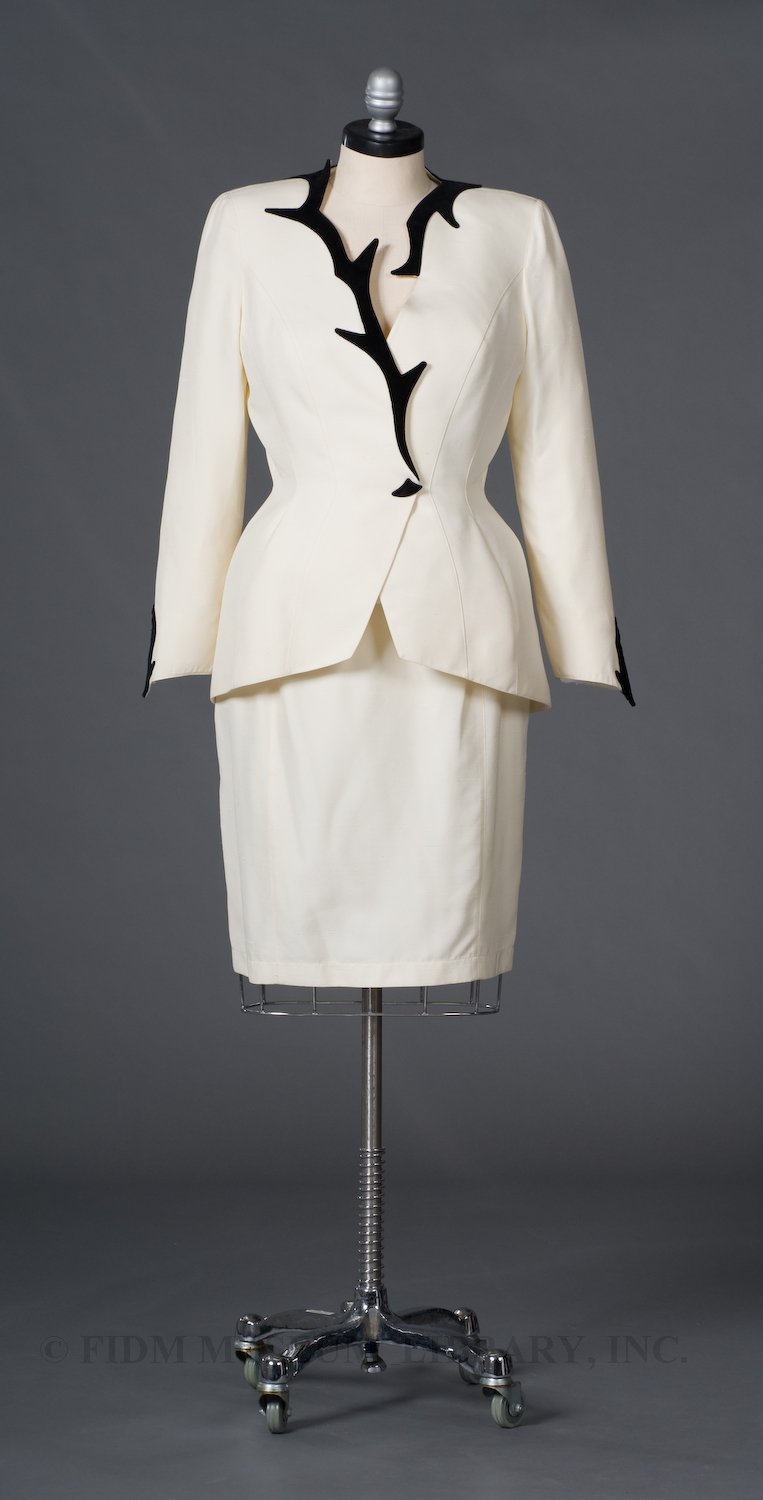 The work of Thierry Mugler is noted for its theatricality and an emphasis on exaggerated, aggressive femininity. Mugler began his career as a freelance designer in the early 1970s; by the end of the decade he had opened his first boutique in Paris. From the beginning, Mugler used fashion to create a stylized feminine archetype: "square shoulders, slender waist, full hips and tight skirt-preferably slit to the hip."1 Mugler presented his designs in spectacular runway shows that resembled stage productions. You can watch the La Chimere (A/W 1997/8) couture collection presentation here. At about 2:22 the mythical human/animal Chimere herself appears. Her costume clearly demonstrates the inherent theatricality of Mugler's aesthetic.

Translated into sharply tailored two-piece suits, Mugler's aesthetic became widely popular during the 1980s. Though intended for everyday wear, the fit of his suits demonstrates Mugler's interest in "the world of cyber-Amazon goddesses."2 Focused on broad shoulders, a defined waist and ample hips, Mugler's ideal woman is meant to dominate, not submit. In Mugler's world, forceful femininity is the root of a woman's power.

Dating from the late 1990s, this Mugler suit is made of cream silk trimmed with black velvet. Many of the garments in this collection were white with black trim. The shape of the graphic trim resembles thorns, a potentially dangerous element of nature. Given Mugler's interest in powerful women, he seems to be suggesting that the wearer is capable of inflicting harm if she isn't treated with respect.  This intent is echoed in a 1995 evaluation of Mugler's work. According to a WWD fashion critic, Mugler's ideal woman "came of age in the Power Eighties, when big shoulders and a bigger attitude were a badge of honor."3

In its slightly menacing quality, this Mugler suit is linked to other items we've featured on our blog. Take a look at our "caterpillar" Azzedine Alaia, this Ted Lapidus fur coat, and our Yoshiki Hishinuma. All these garments share an aura of luxury paired with a sense of discomfort. Fashion scholars have argued that in the last decades of the 20th century (1970-2000) fashion evidenced "a disquieting feeling of anxiety."4 Though the fashion world (fashion personalities, the cachet of the industry, fashion shows) became increasingly spectacular, glamourous and desirable, the garments themselves often suggested a dystopian view of the individual, society and culture. This was particularly true for designers who worked on the margins or were just beginning their careers. The work of Alexander McQueen, the Antwerp Six, Viktor & Rolf and Comme des Garcons exemplify this theory. Though the work of these designers is varied, they share an interest in using fashion to create visual spectacle and as a tool to explore the complex nature of modern life.

Though Mugler isn't usually grouped with these provocative designers, it could easily be argued that his take on femininity is a manifestation of anxiety regarding the shifting role of women in the late 20th century. The years of Mugler's rise to fame coincided with an increased number of women entering the workforce. Power suits, lightly feminized versions of the masculine suit, are synonymous with 1980s fashion. Though Mugler's version of the power suit also has roots in earlier versions of the tailored feminine suit, his 1980s/1990s version enabled women to nod at conventions of professional dress while also accentuating uniquely feminine characteristics.