Remember jellies? Brightly colored, glossy plastic jelly shoes, usually shortened to jellies, were a 1980s fad. Made from injection molded plastic, jellies were available in a rainbow of colors and often had a textured (braided, ridged, etc.) surface. Though slip-on jellies were the most common style, buckle jelly sandals and even jelly lace-ups were also available. This pair by Thierry Mugler are in the classic slip-on style, though the lightning bolt cut-out gives them a unique character. Though it's a bit difficult to see in this image, the shoes are embedded with gold glitter.

Jelly shoes are rooted in the 1960s, when new materials were used with abandon to create shoes, garments and accessories. Plastics, which could be fabricated with bright colors and glossy surfaces, were particularly popular. This plastic car shoe by Herbert Levine, Inc. perfectly exemplifies the widespread use of plastics in 1960s shoes. As we discussed in a post describing our conservation collection, plastics deteriorate dramatically as time progresses. These Mugler jellies were probably crystal clear when first made, but have yellowed slightly with time.

Mugler designed these shoes for Grendha, the company that claims to have introduced jelly shoes in the United States. In 1981, Preston Haag, a US based businessman discovered a Brazilian manufacturer of plastic shoes during a trip to a Brazilian trade conference. Haag named his subsidiary of the company Grendha, a variation on Grendene, the name of the Brazilian manufacturer. Haag signed a contract to import Grendene's plastic shoes, which were displayed at the 1982 World's Fair in Knoxville, TN. A buyer for Bloomingdale's noticed the shoes and placed a large order, launching the shoes into widespread popularity. In an effort to maintain a stylish edge, Grendha worked with Thierry Mugler, Dorothee Bis, Jean-Paul Gaultier and Fiorucci to create designer plastic shoes. This 1985 advertisement showcases the result of this collaboration, including a green version of the Mugler Apollo jellies. Doesn't this ad have a strong 1960s flavor? And notice that Mugler's name is spelled Muglar! 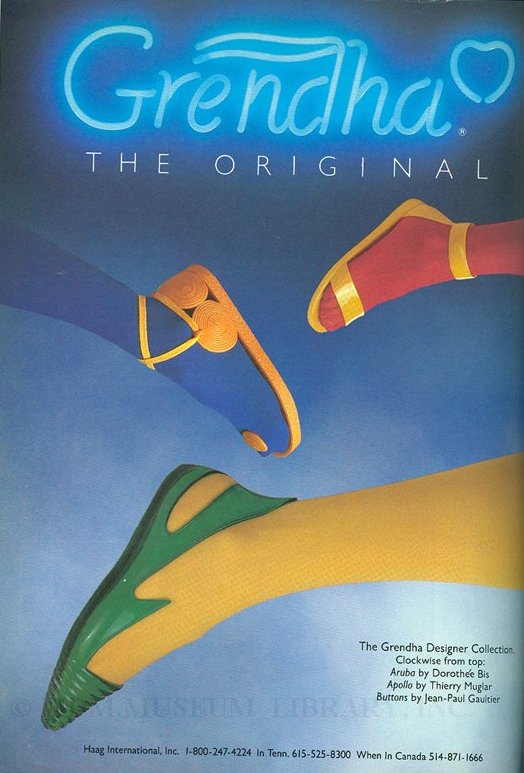 Though Grendha claims credit for introducing jellies to the United States, evidence suggests that another company might deserve that honor. A 1980 article in the New York Times describes consumer reaction to brightly colored plastic jelly shoes sold at New York department stores. Like Grendha's 1982 jellies, these jellies were also inspired by shoes seen abroad. According to the article, shoe manufacturer Bert Geller spotted jelly oxfords on Greek hotel employees. Geller brought the idea back to New York, where his company Andrew Geller manufactured four-eyelet oxford jelly shoes for men and women. The shoes were popular, with Sak's reporting that the average customer purchased 3 pairs of jellies. While most consumers planned to wear the jelly shoes for gardening or at the beach, one stylish gentleman purchased red jellies, which he planned to pair with a black tuxedo at a formal event.