Though "cabana set" sounds like the nickname for an elite group of beach hopping travellers, it actually refers to a matching or coordinating set of man's swim trunks and sport shirt or light jacket. Though California swimwear manufacturer Catalina promoted matching swim trunks and sport shirts in the 1940s, the term cabana set wasn't applied to this casual ensemble until sometime in the early 1950s. This clever marketing ploy elevated a straightforward sportswear pairing to an outfit suitable for the relaxed, yet sophisticated, indoor/outdoor lifestyle closely associated with Southern California. A 1954 advertisement for Arrow brand cabana sets declared them suitable for "dad's loafing, puttering or beaching."1 As this quote reveals, cabana sets were marketed as multi-purpose sportswear, suitable both on the beach and off. 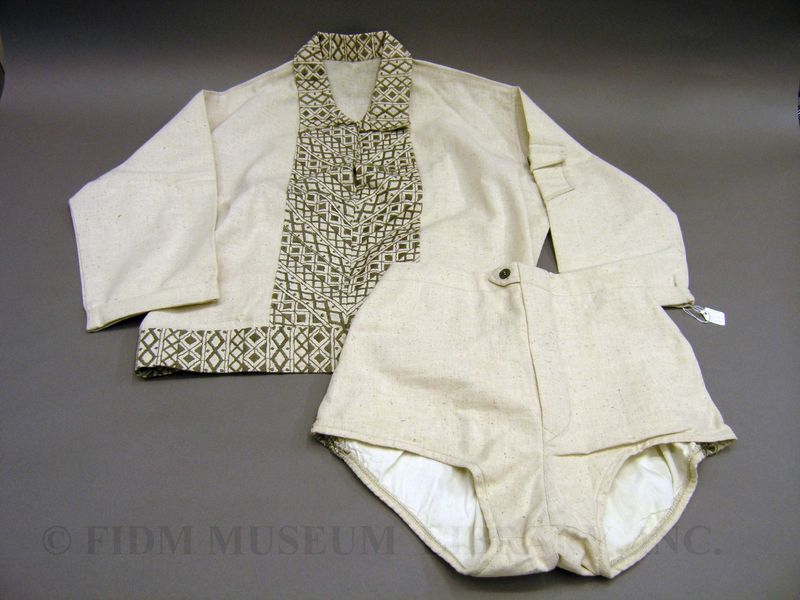 Preliminary research suggests that the cabana set was the creation of California sportswear designers who saw an opportunity in the popularity of the aloha or Hawaiian shirt.2 Hawaiian shirts became widely popular during and after World War II, as Americans stationed in Hawaii brought the style back to the mainland. In California, sportswear manufacturers also began designing Hawaiian style shirts for retail sale throughout North America. Many of these manufacturers were already designing swimwear, so it was only a minor innovation to combine swim trunks and sports shirts into the cabana set. Taking it one step further, some manufacturers offered matching swimwear for the entire family–a cabana set for father and sons, one-piece swimsuits for mother and daughters, all in the same fabric.

Like much of the casual sportswear created during the 1940s, '50s and into the '60s, cabana sets often incorporated vivid colors and vaguely exotic patterns. The cabana set pictured above is made from an roughly woven textile and trimmed with a band of geometric (Polynesian inspired?) patterned fabric. The multi-colored cabana suit below features a bright palette of citrusy green and yellow. Other examples seen in period advertisements feature bubble-blowing fish, abstracted floral and foliage patterns or multi-colored plaids. These bold patterns and bright colors are remarkable because they are so far removed from the relatively sober, dark colors seen in men's professional attire during the same period. 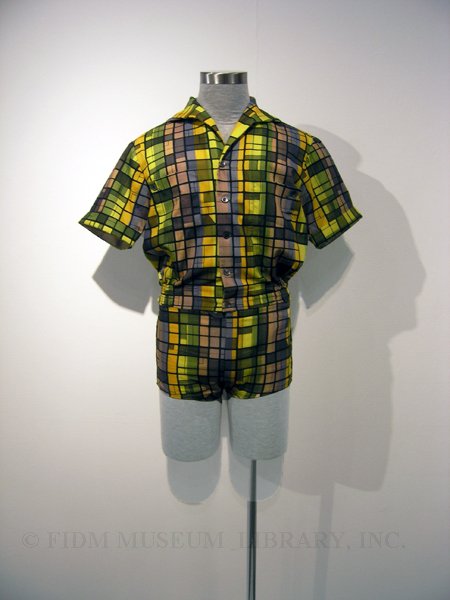 Both cabana sets featured in this post are probably manufacturers samples created by Maurice Levin, a swimwear designer. Originally from New York City, Levin had a long career as a swimwear designer, working for Jantzen during the 1950s, and Catalina during the 1960s. In 2007, we received a donation comprised of Levin's designs, both sketches and actual garments. We're still working to document and date all the pieces. Drop us a line if you've seen either of these cabana sets in an advertisement!