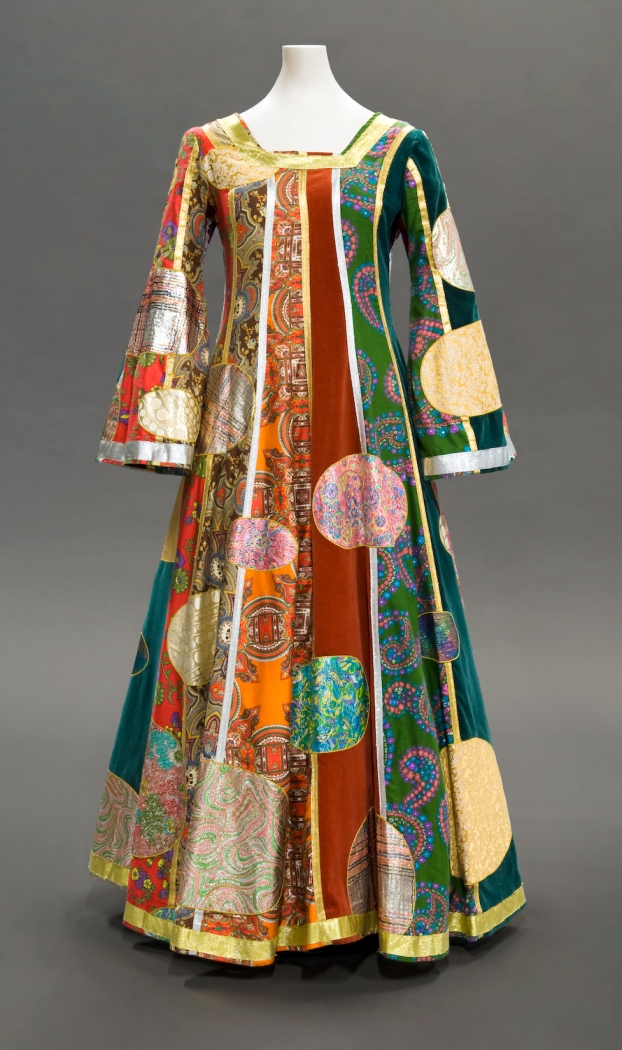 Like this patchwork evening gown, Giorgio di Sant' Angelo's (1933-89) professional background was an unconventional mix. Born in Florence, Italy, Sant' Angelo was raised on his family's ranch in Argentina. He studied law at an Argentinian university, along with architecture and industrial design in either Italy or Argentina. Sant' Angelo also practiced a variety of artistic disciplines, including ceramics, painting and sculpture. His artistic skill led to short-term study with Picasso and to Sant' Angelo winning a Walt Disney animation apprenticeship at the company's California studios in 1962. Unhappy in Los Angeles, Sant' Angelo decamped for New York after only a few weeks.

In New York, Sant' Angelo worked a variety of freelance positions while also designing a line of chunky plastic jewelry called "ArchitectJewels." The line included large, square rings of faux-tortiseshell and over-sized square earrings with circular cut-outs in the center. Sant' Angelo's jewelry designs caught the attention of Vogue editor Diana Vreeland, who hired the versatile designer as a stylist for the magazine. Sant' Angelo's one-off designs and over-the-top styling helped create the extravagant and adventurous look of late 1960s Vogue. Some of his most memorable creations were worn by the model Veruschka, including a gold chain bikini and improvisational garments in an editorial ostensibly focusing on new fabrics for 1968.  Photographed in Arizona's Painted Desert and called "The Magnificent Mirage," the editorial featured Veruschka swaddled in layers of fabric and fur secured with artfully placed cords or leather thongs. Later in Sant' Angelo's career, braided cord and thin ribbons of fabric would become important elements in his designs. 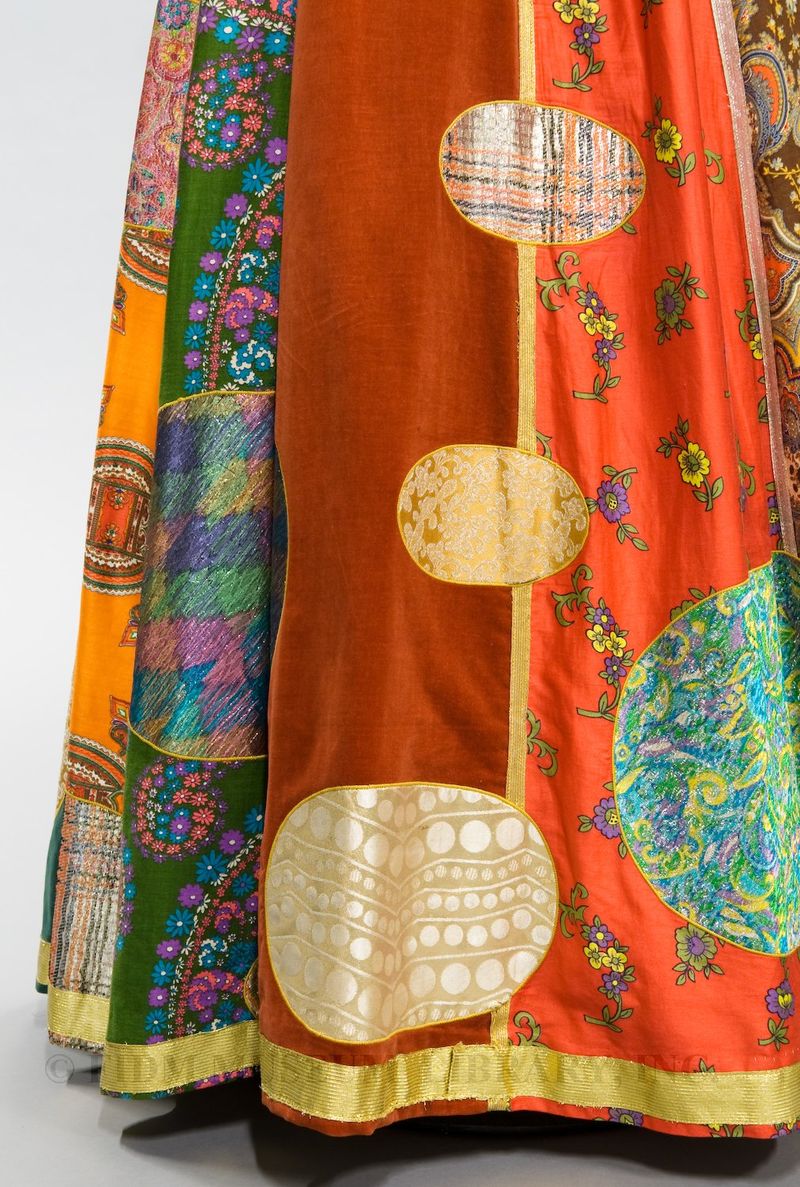 Sant' Angelo's first collection of clothing was featured in the March 7, 1969 issue of Life. The collection features all the basic elements of his aesthetic: vibrant patterns, textures, wrapping and tying and an interest in showcasing the body. A Tyrolean dress highlights Sant' Angelo's restless borrowing from a variety of cultures and influences, including Native American, Asian and South America. The full article, including images, can be found here. 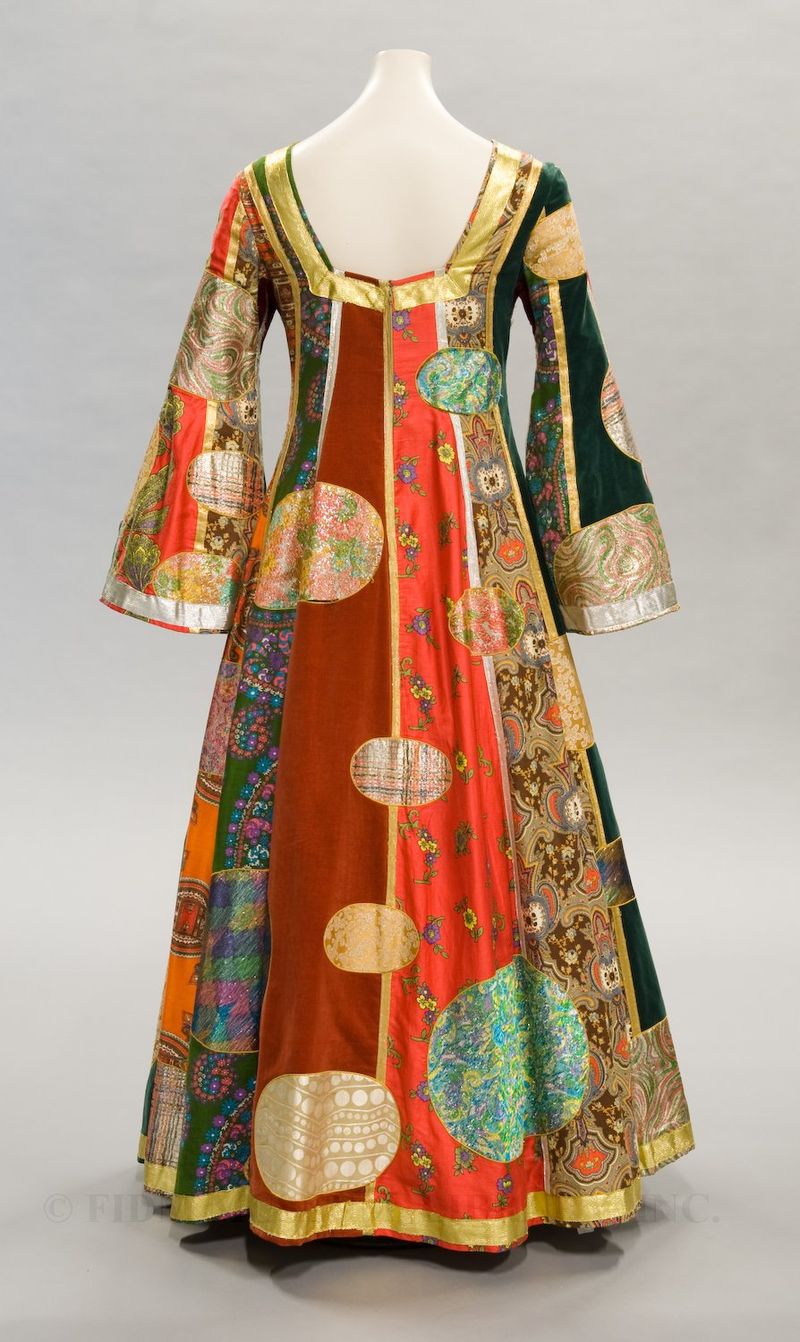 This particular Sant' Angelo dress is well documented, appearing in advertisements and a 1969 Vogue editorial shot by Irving Penn. In the Vogue spread, the dress was perhaps overshadowed by its model, Naomi Sims. Having only begun modelling two years previously, Sims had already appeared on the cover of the New York Times fashion supplement (8/1967) and the Ladies Home Journal (10/1968) and would soon appear on the cover of Life (10/1/1969). Sims is often labelled the first black supermodel, paving the way for others including Pat Cleveland and Beverly Johnson. For his runway presentations, Sant' Angelo often hired Sims, Cleveland or other black models. Sant' Angelo's hiring practices reflected the impact of the Black is Beautiful movement in the United States and highlighted shifting notions of beauty in the late 1960s and early 1970s.