In 1948, when the fashion world was atwitter with talk of Christian Dior’s New Look, renowned American designer Adrian took fashion lovers to task for their over reliance on the dictates of Paris. Though the New Look had already created a radical break with the military-inspired fashions of the World War II era, Adrian insisted that a women shouldn’t feel out-of-date or unfashionable simply because her suit was six months old: “Whether a woman buys an expensive or inexpensive suit one season, she doesn’t like to be called an ‘antique’ six months later.”1 Unlike Christian Dior, who promoted extravagantly full skirts for day and evening, Adrian preferred a slim silhouette for daytime fashions, reserving full skirted looks for evening. This 1948 Adrian suit demonstrates the designer’s preference for a strong shoulder and straight skirt.

From 1941, when he founded Adrian Ltd., suits were an important part of Adrian’s repertoire. Though he was adept at designing inspiring evening wear, Adrian’s standout suits are his true legacy. Exploiting construction details, Adrian used geometric insets, strategically placed buttons and mitered stripes to create appealing, clever day wear. Color and pattern were also important to Adrian’s suits; boldly striped textiles frequently enliven his suit jackets. Brass disks brighten the closure and cuffs of this otherwise sedate black suit jacket. Tab pockets wrap around the waist to the back of the jacket, where a tabbed yoke echoes the design of the pockets. The skirt is straight and narrow, except for a short kick-pleat at center front.

The text of a 1948 advertisement for this same suit highlights Adrian’s strong belief in his favored silhouette. Reading, “The silhouette that will never die,” it is Adrian’s battle cry against the New Look. Adrian wasn’t alone in his rejection of this silhouette. Some North American women founded “Little Below the Knee” clubs to protest the longer skirt lengths proposed by Dior, and the necessity of purchasing new wardrobes (with longer skirts) to stay in fashion. Branches emerged in at least two cities: Dallas, TX and Cleveland, OH. These pockets of resistance were soon submerged by the overwhelming popularity of Dior’s New Look. By the early 1950s, it had became the dominant silhouette and was available at all price points. 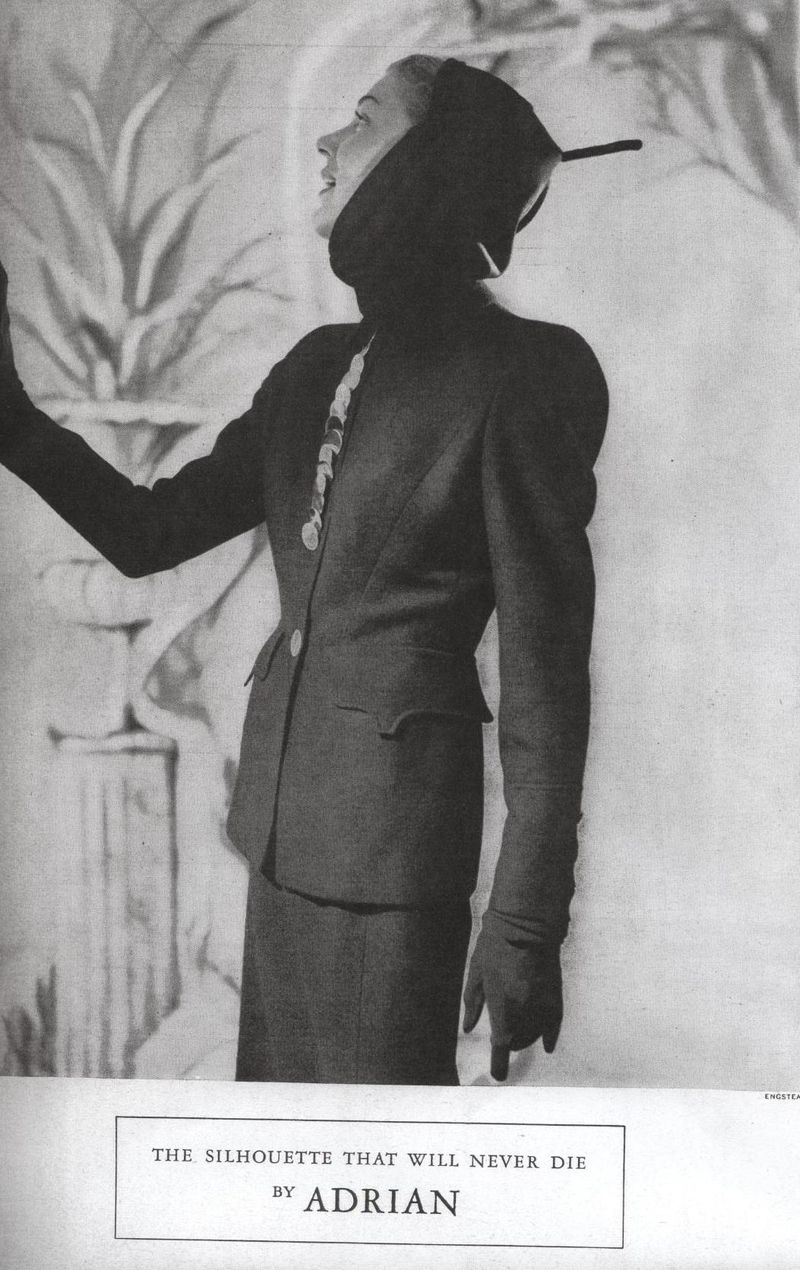