Sixty-eight years ago today, on June 6 1944, over 150,000 Allied troops landed on the beaches of Normandy, France. Called D-Day, this invasion marked a turning point in World War II. At the time of the invasion, Nazi Germany occupied much of western Europe, including France. Due to Allied successes during D-Day and the subsequent Battle of Normandy, by August 1944, Paris was liberated from occupation and German forces were in retreat throughout Europe. Within a year, Allied forces had achieved military victory throughout Europe.

In light of this anniversary, we wanted to revisit our 1941 World War II propaganda dress. Made from yardage printed as a fundraiser for the volunteer British-American Ambulance Corps, it features a swirling print built around the patriotic slogan, "There'll Always Be An England." When we originally posted this dress in 2010, we were somewhat puzzled as to why this slogan was printed backwards. Our curators have recently settled on an answer to this question. Read on to learn more!

During World War II, raw materials were in short supply. Wool was needed for military uniforms and a shortage of rubber led to the near disappearance of athletic shoes. Silk stockings vanished, as silk fiber was needed in the production of parachutes. Additionally, factories which had previously produced civilian clothing were reconfigured to produce items needed in the war effort. In order to regulate the remaining production of civilian garments, the United States government implemented the L-85 regulations in 1942. L-85 dictated the styling of garments with an eye to conserving materials and production time. Skirt length, hem width and types of trim were strictly regulated, as were the cuffs and pockets of menswear. Home-sewn clothing was exempt from these regulations, but all were encouraged to "make do and mend."

In addition to the actual conservation of materials, L-85 regulations provided a constant visual reminder of the necessity of total participation in the war effort. The production of propaganda textiles featuring slogans and imagery relating to the war allowed civilians to support the war effort in yet another way. Interestingly, these textiles were not produced by governments, but by independent manufacturers. In the United States and Britain, propaganda textiles featured familiar slogans such as "V for Victory" and "Keep it Under Your Hat," a reminder that casual conversations could inadvertently reveal confidential information. Other designs featured brightly colored patterns of red, white and blue, the colors of the Allied flags. The FIDM Museum propaganda textile dress seen here features a pattern embedded with the slogan "There'll Always be an England," after a British patriotic song of 1939. 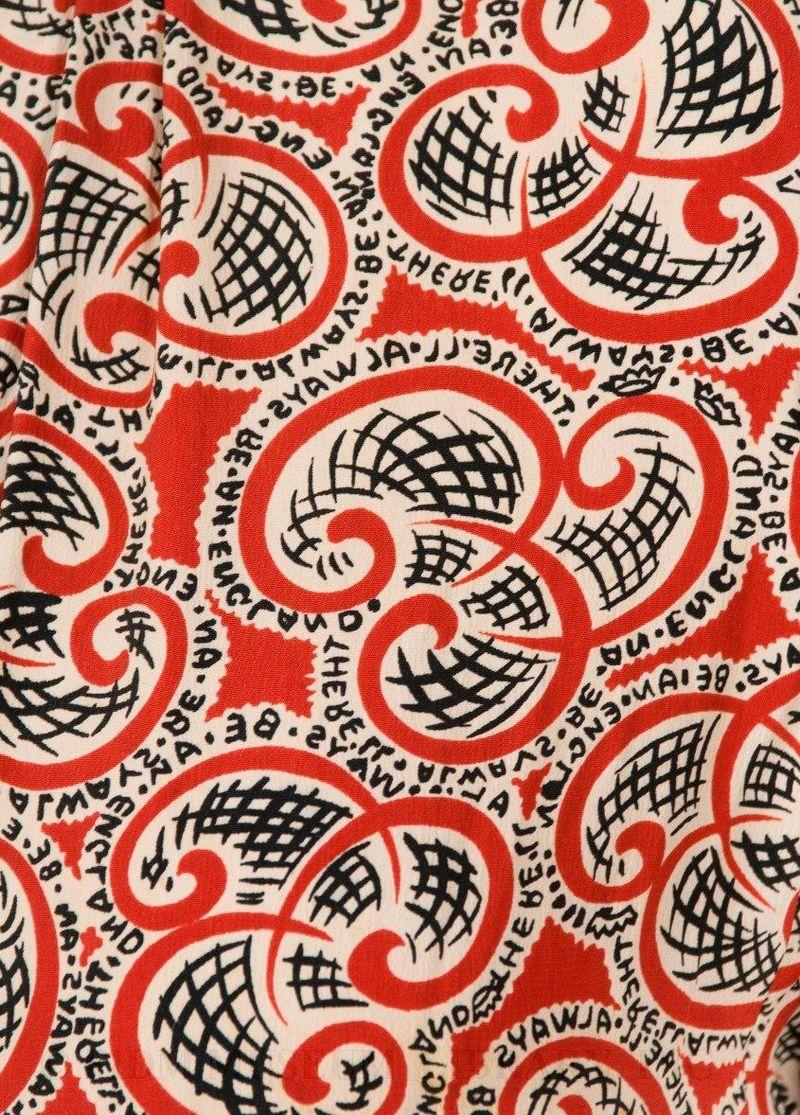 This textile was among a collection of propaganda textiles manufactured and sold in March 1941 as a fund-raiser for the British-American Ambulance Corps, a New York based volunteer ambulance corps. In March 1941, the United States had not yet entered the war, so the textile collection was intended to provide financial support to the Corps so they could transport injured troops. The textile collection was also a gesture of support to beleaguered British citizens who had suffered under Nazi bombing. Other featured slogans included "Bravo Britain" and "Friends Across the Sea," in colors called English Channel blue and Buckingham Palace red. To promote the textiles, which were marketed nationally, a fashion show was held in Manhattan featuring socialites clad in dresses created from the various textiles. Astute readers probably noticed that the text in the detail image is backwards. This collection of textiles was intentionally printed with reversed "mirror-writing," which can be read properly only when reflected in a mirror. Our curators have recently determined that the unusual mirror-writing featured in the print is a reference to the many coded messaging systems used during World War II. The mirror-writing also had an immediate effect on the wearer; every time she glanced in a mirror, she was confronted with a cheerful, fashionable reminder of her patriotic duty.

With its square shoulders and slightly full, just-below-the-knee skirt, this dress showcases all the important elements of World War II era fashions. The prevalence of military uniforms, L-85 regulations and a sense of patriotic duty led to dresses with a compact, structured silhouette similar to that of a military uniform. Because the dress has no label, we can guess that it was probably created by a skilled home-sewer who wanted to support the efforts of the British-American Ambulance Corps. The ruched, self-fabric trim at the shoulders and waist, and the fullness of the skirt suggest that this was made soon after the textile was released in 1941. With the advent of L-85 regulations in 1942, even home-sewers probably would have streamlined their garments out of a sense of patriotic duty.