Astute fashion observers quickly realize that fashion is cyclical. Silhouettes, colors, motifs, and styles disappear, only to reappear years, or even decades, later. Some styles, like the diaphanous drapes of ancient Greco-Roman dress, seem to inspire more revivals than others. Based on the soft, unstructured garments of ancient Greece and Rome, classically inspired dress appeared at the turn of the nineteenth-century, and again as the century drew to a close.

In the last decade of the nineteenth-century, gowns inspired by antiquity offered a respite from the constricting understructure, heavy embellishment, and bright colors of contemporary fashionable dress. Because it typically incorporated fewer, less restrictive undergarments, this "new" style was considered a healthful alternative. Its promoters also considered it more beautiful than popular styles; to distinguish it from fashionable dress, the style was often called artistic dress. Unlike fashionable dress, late-nineteenth century classical dress revivals were less subject to the changing whims of fashion. By design, artistic dress featured fewer datable details; it was a style designed for the ages. 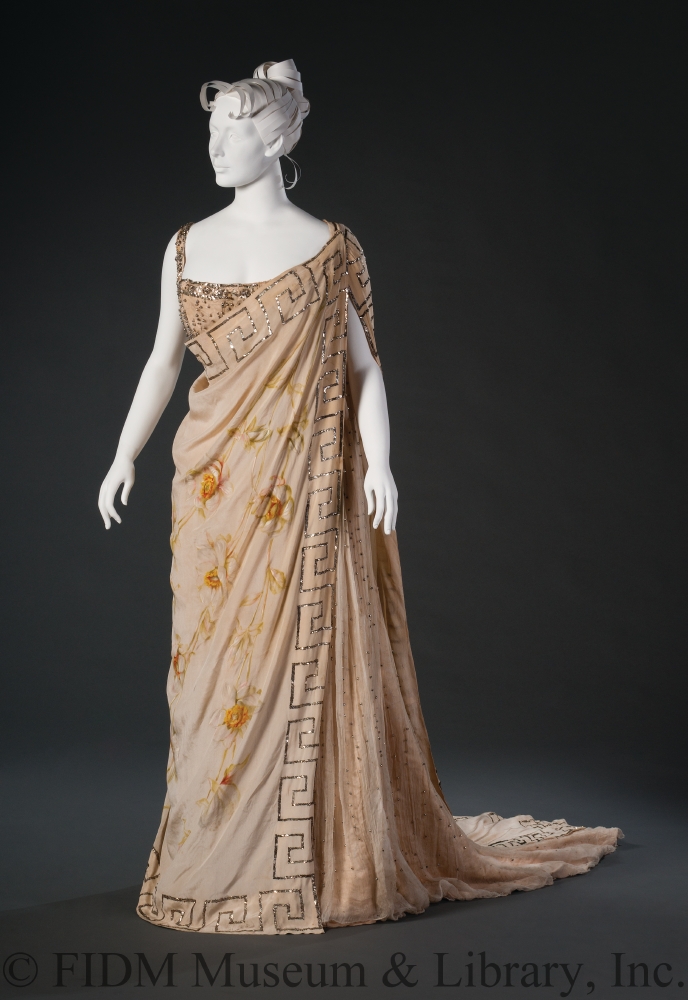 Artistic dress was donned by women with the courage to forgo conventional fashion. Seasonal trends, mass production, and corporeal contortions were or no interest to the artistically inclined. Instead, they preferred the ease of movement offered by flowing, hand-crafted garments reminiscent of antiquity. The appeal of the antique was summarized in Harper's Bazar in 1891: "Greek costume has in it somewhat of the dignity, the simplicity, and the truth of nature."1

This extremely rare, formal evening ensemble was custom made and is likely the unique creation of a French or English couture house. It features an asymmetrical himation—a diagonally draped mantle worn by Greco-Roman men and women millennia ago. Hand painted field-lilies meander over the supple silk crepe, embroidered with a classical Greek key motif in glistening silver bouillion. Hand-blown mercury-lined glass beads cascade down the diaphanous chiffon undergown that falls unimpeded from bosom to hem over a flesh-colored lining. The lightweight textiles rippled around the body in movement, molding to the wearer's statuesque contours in emulation of sculpted cloth in Hellenic statuary. 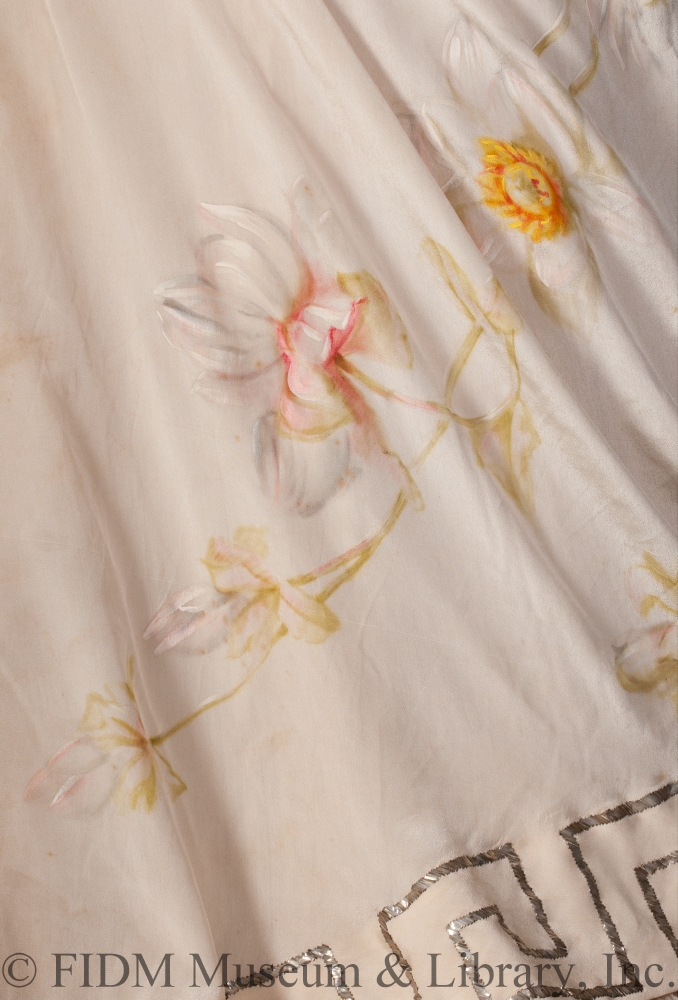 Though artistic dress had many supporters, it was sometimes scorned. In 1897, an article in Godey's Magazine pointed out the absurdity of "stenographers and shop-girls trailing their classic robes in New York slush."2 In other words, though classically inspired dress might have been an improvement over the corsets, bustles, and petticoats of fashionable dress, it didn't necessarily improve the life or comfort of the average woman. Furthermore, as noted previously, wearing artistic dress meant bucking societal conventions, not something every woman would do willingly. For this reason, artistic dress was a style worn primarily by those with a devil-may-care attitude.