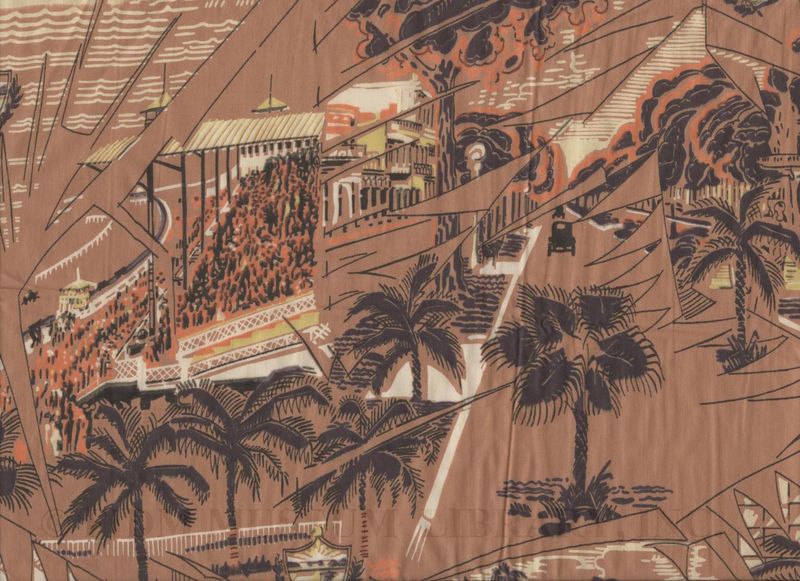 In 1928, H.R. Mallinson & Company, a New York based textile design and manufacturer, introduced a new line of printed textiles. Titled Playgrounds of the World, the series paid tribute to internationally-known travel destinations. Featuring approximately forty-seven different patterns commemorating Palm Beach, the French Riviera, Bermuda, the Catalina Islands, Newport, Rhode Island, and other vacation worthy locations, these dense, dynamic patterns brought the world to consumers. FIDM Museum owns a black and tan tropical themed swatch (approximately 8×17 inches) from the Playgrounds of the World series. Like all H.R. Mallinson textiles, the company and pattern name are woven in the selvedge. Unfortunately, our swatch was cut midway through this identifying text. Given the tropical feel and overall theme of the series, we hazard a guess that our swatch presents a vision of Havana, Cuba.

Playgrounds of the World was just one of many themed textile lines developed by H.R. Mallinson & Company. Other series highlighted the beauty of America's national parks, American state flowers, and Early American themes, including Betsy Ross and the life of Abraham Lincoln. These printed textiles were for use as fashion fabrics; they were available to home sewers and garment manufacturers alike. Not content to limit his audience to North America, Mallinson successfully promoted his company's textiles for use by French couturiers.

Founded in 1900 and renamed H.R. Mallinson & Company in 1915, the company's goal was to challenge the supremacy of European textiles. Though the United States manufactured silk textiles, consumers in the early twentieth-century preferred the more prestigious, and more expensive, imported French silks. By focusing on creative, appealing designs, H.R. Mallinson & Company attracted consumers, helped establish the legitimacy of American-designed textile patterns, and became one of the most well-known textile manufacturers of the early twentieth-century. In 1928, Vogue described the improved quality of American textile patterns: "our own manufacturers have caught up with their clamorous market, and the best of the domestic prints can compete with the blended tonal effects, the subtle use of unexpected colours that characterize those that have come over from Paris."1 An image of an H.R. Mallinson & Company fabric of red and yellow cherries printed on a black silk ground was used to illustrate the article.