6 years ago Art of Television Costume Design, Behind the scenes, Intern report, Interns and volunteers

6 years ago Art of Television Costume Design, Behind the scenes, Intern report, Interns and volunteers

I arrived in Los Angeles to work at the FIDM Museum without a lot of expectations–I was just excited to be in California and working at such an amazing institution! My first project was assisting on the 9th Annual Outstanding Art of Television Costume Design Exhibition, also known as the Emmys exhibition. 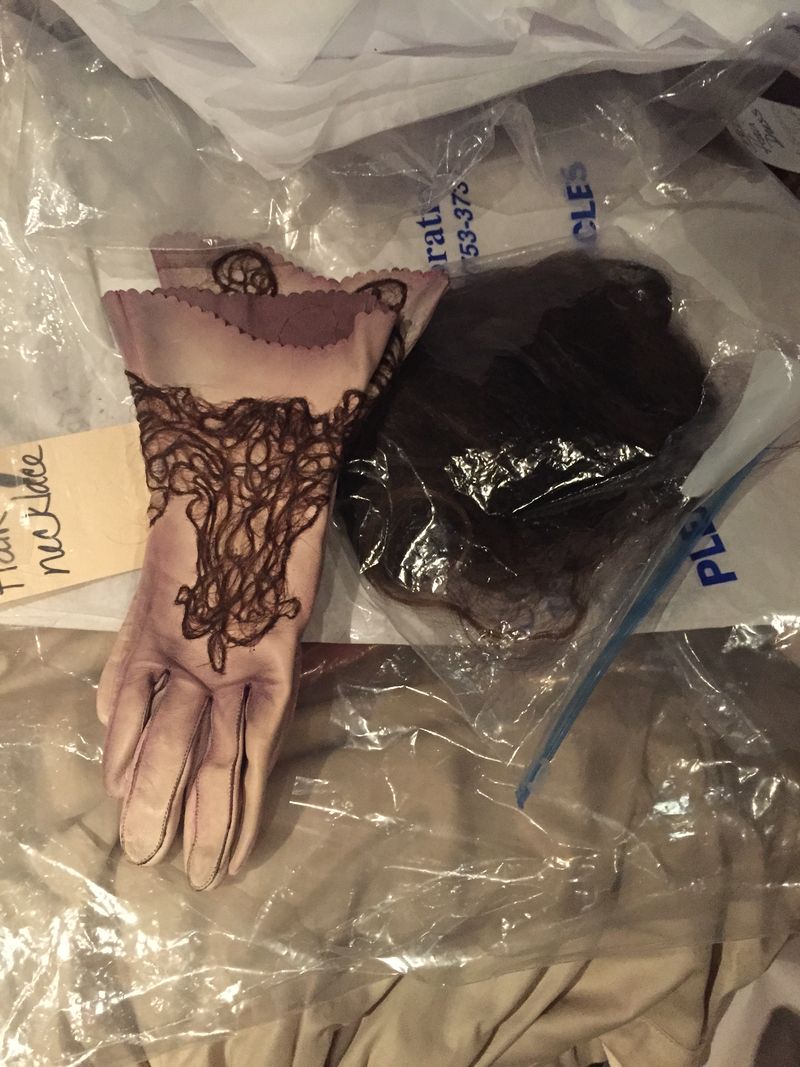 Many costumes have multiple accessories, such as these hair-trimmed gloves from the WGN show Salem.

The first step in the process of installing such an exhibition is creating condition reports for all the costumes that are being loaned to the museum by the various television shows. Condition reports are exactly what they sound like: reports on the condition of each garment. However, in such a large exhibition, with so many different pieces from so many different places, the reports must be incredibly meticulous, detailing the way the shipment arrived from the studio, the packaging used, and the individual items in the packages. From elaborate gowns to tiny little tie pins, each piece of a costume must be accounted for, documented, photographed, and prepared for installation. The FIDM Museum is responsible for returning everything as close as possible to how it arrived. This is not only out of respect for the elaborate costumes, but for also the individual costume designers and studios that have very kindly loaned their items for display. 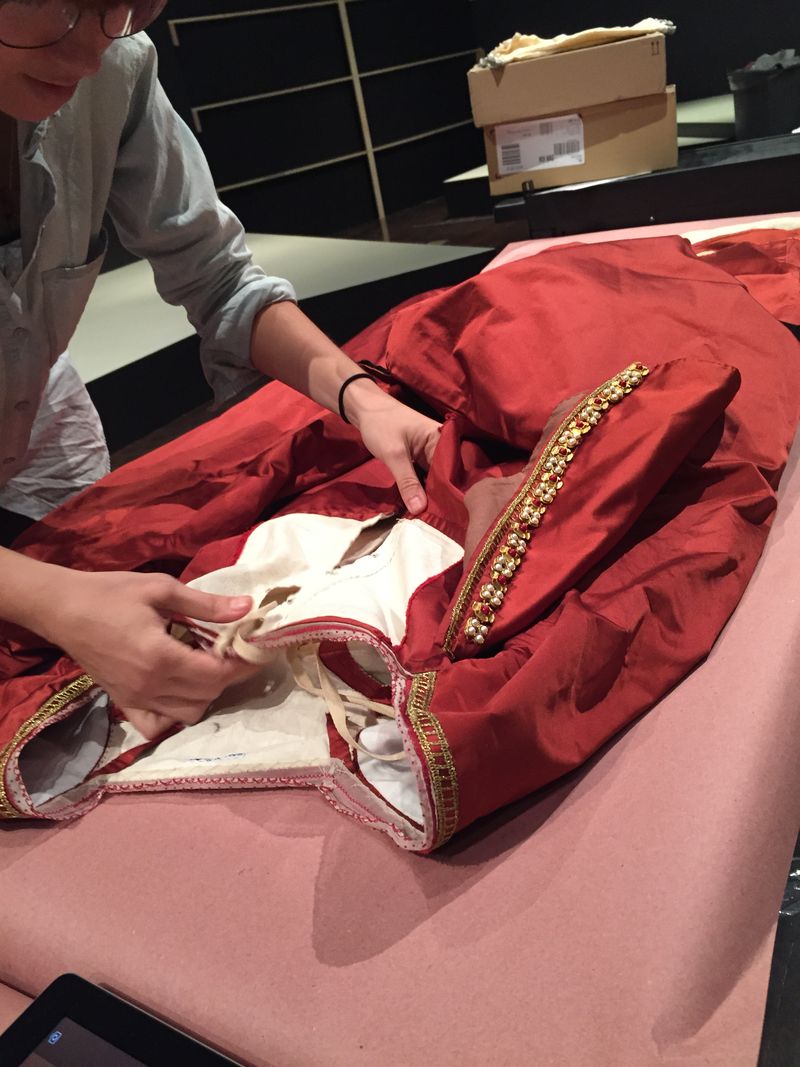 Measuring garments as part of condition reporting determines the size of mannequin to be used. 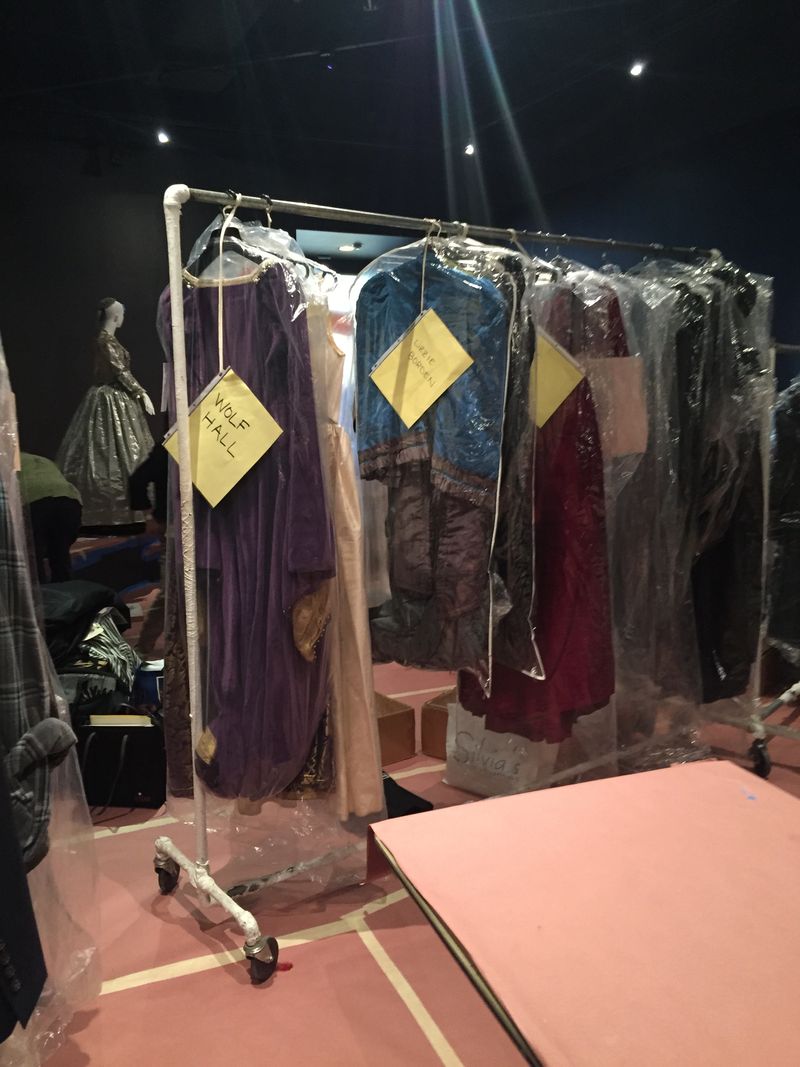 Costumes from a variety of shows are prepped for the curator to decide which will be included in the exhibition.

A mannequin is first prepped with pantyhose: one pair for the legs and another pair, the legs cut off, over the head. This not only protects the garments from rubbing against the mannequin and becoming damaged, but also provides a good base for any padding that may be required. Because many of the costumes are from period pieces, or tailored to a specific body shape, padding is incredibly important. It might include archival bunting pinned to the pantyhose or stuffing beneath the hose. Filling out a mannequin makes the body types look realistic and communicates the character-driven aspects of the exhibition. 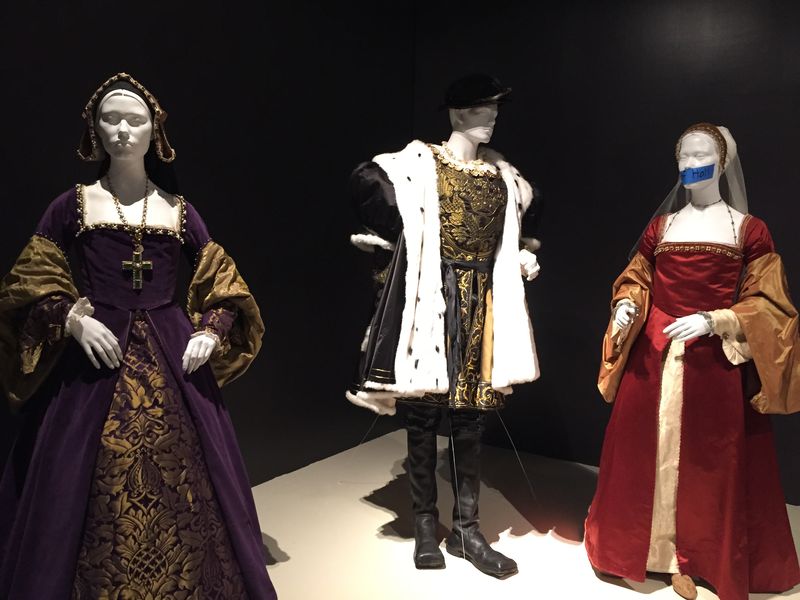 Mannequins dressed in the beautiful costumes from the PBS/BBC Tudor-era drama Wolf Hall wait to be spiked to the platform.

After many hours of dressing and rearranging the mannequins, their final places are chosen. The mannequins are spiked into wooden platforms to keep them from moving or tipping, and the platforms are cleaned and touched up before the exhibition opens to the public. It is truly amazing to start a project in an empty gallery and finish with beautifully dressed costumes on display!