We conclude our Oscar Week Costume Designer Q&A with this year's double nominee, Sandy Powell, who is recognized for her work on both Cinderella and Carol. Powell's celebrated career includes Academy Award wins for Shakespeare in Love (1999), The Aviator (2005), and The Young Victoria (2010).The diaphanous blue ballgown from Cinderella is one of the highlight's of FIDM Museum's Art of Motion Picture Costume Design exhibition; Powell's design is a feat of engineering, layering cage crinolines with petticoats and superfine fabrics in blues and lavenders to achieve a watercolor effect. The designer partnered with Swarovski to add sparkle to the gown, and the crystal company also helped Powell create a one-of-a-kind glass slipper for the film. Read below for Powell's take on period costume design, collaborating with Cate Blanchett, and the actresses that inspired Cinderella's stepmother. 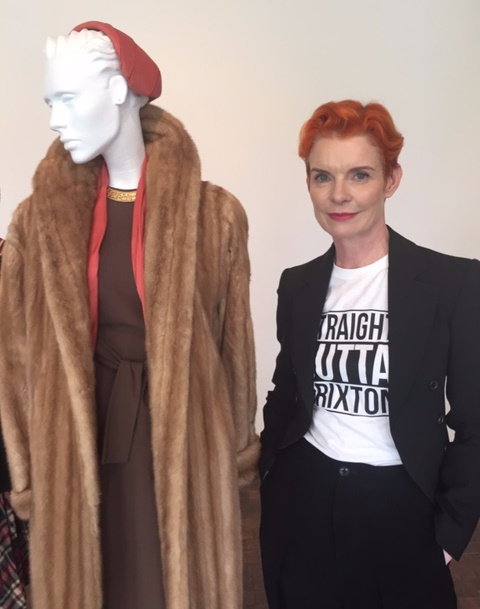 Q: Harvey Weinstein once said your great gift is your ability to make costumes look contemporary. You manage to be both true to the period and modern. How did you incorporate this methodology while you were designing for Carol?

A: I’m not sure I did in this particular case! I know he’s referring to other films that I’ve done with him, such as Shakespeare in Love which is a period film, but because of the nature of it, it’s a comedy, and appealing to the masses. There were modern elements, like the Shakespeare doublet was made to be the equivalent of a leather jacket, even though it was in Elizabethan cut, I tried to make the feel of it like a leather jacket. For Carol, I think it appeals to a modern audience because they are clothes that actually could be worn now. Somebody could wear this and not look out of place. Maybe the hat would look a little odd, but the actual dress could easily be worn and not look like a costume.

Q: And that was because of the character of Carol being so sophisticated?

A: Yes, but actually the period, 1952, is such a lovely period anyway. It’s all wearable clothing now. People wear vintage clothing anyway. So I think that’s the modern element – it wasn’t anything I consciously thought about doing, like ‘how can I make this appeal to a modern audience?’

Q: You have spoken about your love of color, but you chose a more muted palette. Was that also because it was right for the period?

A: Yes, it was right for the period, but it was also the feeling that Todd [Haynes, Director of Carol] wanted for the whole film. We’ve done fifties before with Todd for Far from Heaven which was saturated color, and this was just a different feel. This was just about gritty realism. It’s set in the winter months, so it’s wintry and warm. I love color, and this is color I still love, but it’s just not saturated, strong color – it’s muted, more subtle shades.

Q: For Cinderella, you looked at 1950s film doing the 19th century, is that right?

A: Yes, forties for Cate’s character. For the stepmother I was looking at actors like Joan Crawford and Marlene Dietrich in the 1940s in 19th century period costume, which is all wrong with the big shoulder pads and pointy bosoms and everything. That was my take on her character.

Q: How did you get that idea?

A: I don’t know, it just came! Reading about the character, the first image that came to my head was Joan Crawford in a big hat. I don’t know if it actually came from a film, but then I started looking at photographs, stills, stuff like that. There were pictures of her and Marlene Dietrich in period films which are hysterical because it’s so wrong, but it still looks like 1940s.

Q: Sort of like Adrian doing Pride and Prejudice?

A: Adrian’s Pride and Prejudice was my inspiration for the stepsisters. That’s sort of like 1950s doing 1830s. Cate as 1940s, and the sisters as 1950s. Pride and Prejudice and Little Women. And Laurence Olivier was inspiration for someone like the prince, with the padded shoulders. The guys have got padded shoulders, which they wouldn’t normally do in the 19th century, but it was that whole thing.

Q: You worked with Cate Blanchett on two films in our exhibition, and she just received the Costume Designers Guild Lacoste Spotlight Award. How do you two collaborate on projects?

A: We collaborate inasmuch as when we were on Cinderella, we knew we were going to be doing Carol, so we started looking at images together. And at the beginning of Cinderella, when I had this Joan Crawford, Marlene Dietrich idea, I took that to her, without actually looking at any clothes – I just took images of them. And she loved it, and started collecting photographs herself, which we then bombarded the director with, Kenneth Branagh, okay this is how we think it should be (and not giving him any choice! You dare disagree!) She thought that was a great idea. And then the collaboration really happens in the fitting. She’ll actually say I want to wear this, or this color. In the fitting you put things on, and that’s when you realize if things work or not. And of course someone like Cate can wear clothes beautifully. For Carol, she would strike a pose like a fifties model. She looks like a fashion model. And with the stepmother, she immediately took on the character. Then once we’ve got – for Carol, she’s got a closet of clothes, and once we have that, it’s then deciding between us which things get worn in which scenes. I don’t necessarily design something specifically for a scene; I design it as a collection of clothing.

Q: Do you do that for all of your films?

A: Depends, I try to – unless there are specific things, if there’s the party dress, you design the party dress. But if it’s just everyday wear, I’d quite like to get what we all have – an interchangeable wardrobe. A mix and match wardrobe of separates and then decide, okay today we’ll have this sweater and this skirt, like you do in life.

Q: You were awarded an OBE in 2011, what was that experience like?

A: Do you know what, I keep forgetting about that! It was mad, actually, going to Buckingham Palace. I’m from London, so it wasn’t far to go. I took my mum and my sister, and we went to Buckingham Palace. It’s a weird old ceremony. It wasn’t the Queen, it was Princess Anne that gave the award. And there are hundreds of them – it’s actually a really long and boring ceremony. You have to sit down and wait for your turn. They do it in alphabetical order, I think. You have to line up, and then your name is called, and then you go and shake her hand and she has a little chat. And then you go and sit back down again, and you have to wait for the entire room to do it.

Q: How did you decide what to wear to that? 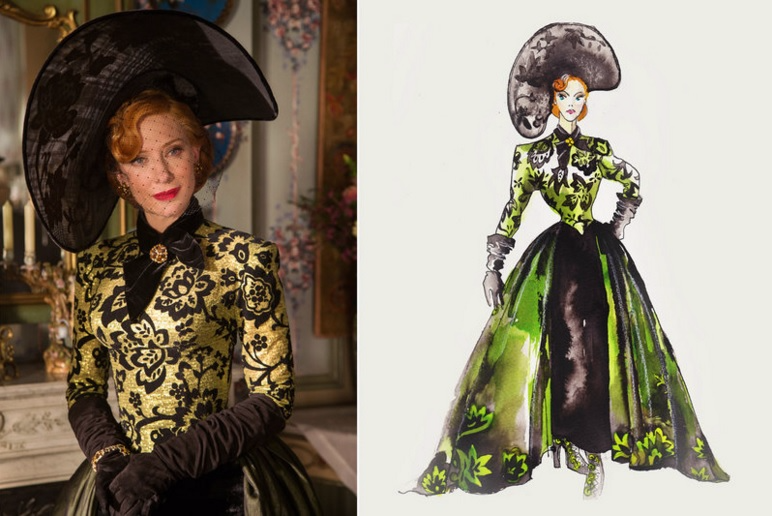