The 10th Outstanding Art of Television Costume Design exhibition is coming to a close on October 15, but we wanted our featured costume designers to have one final say about their work! FIDM Museum Newsletter Editor Elizabeth Hinckley reached out to a few designers for an informal roundtable discussion about the challenges and joys of creating television costumes.

Is there something in particular that you want visitors to know, understand, or appreciate about your costumes for your show?

I think one of the main ideas I would like visitors to appreciate about the wardrobe in TGW is how much work and thought really goes into creating character delineation utilizing mostly workwear – and in that world, mostly suits. I wanted the TGW wardrobe to be elegant, chic at times, understated at times, with solid elements of reality while also showing an elevated level of aspirational style. 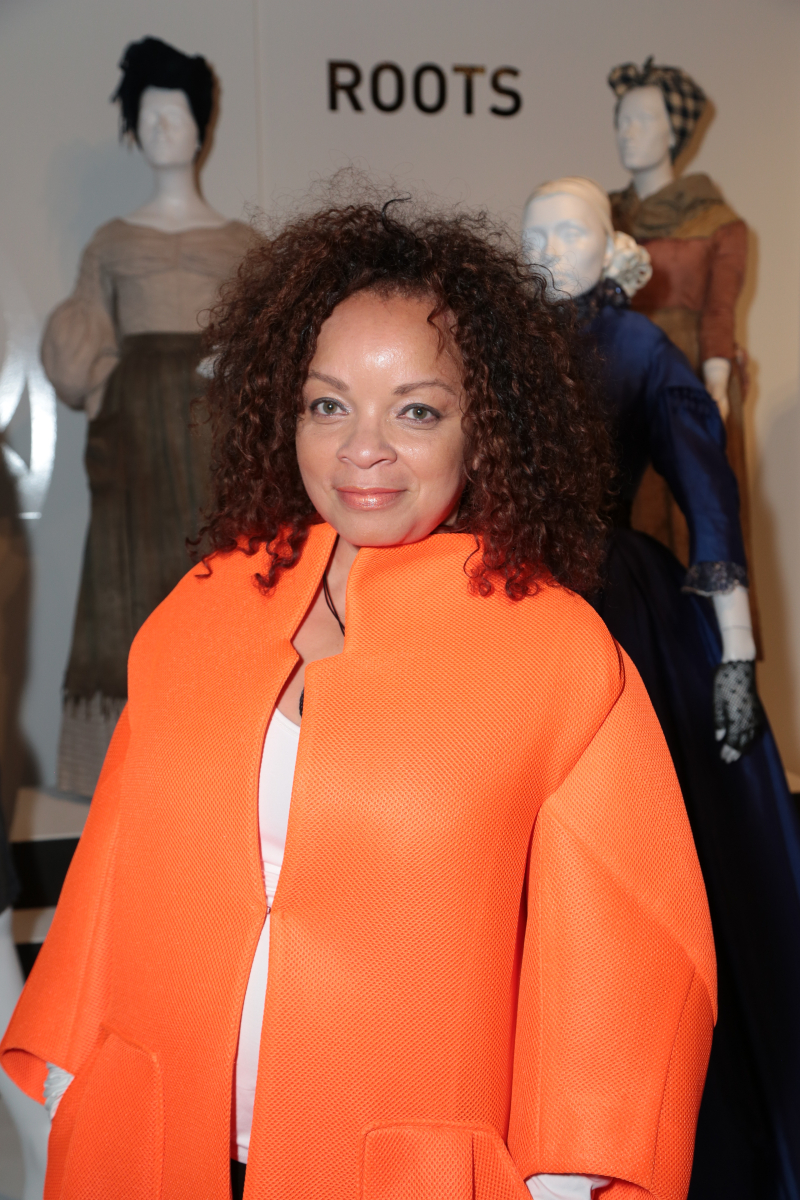 My greatest challenge in creating the costumes for ROOTS was telling the family story with clothing.  It involved a tremendous amount of historical study in the facts about slave conditions, their psychology of dress and understanding day-to-day challenges they faced within the 100 years of slavery in America whilst keeping the memory of Kunta Kinte alive. 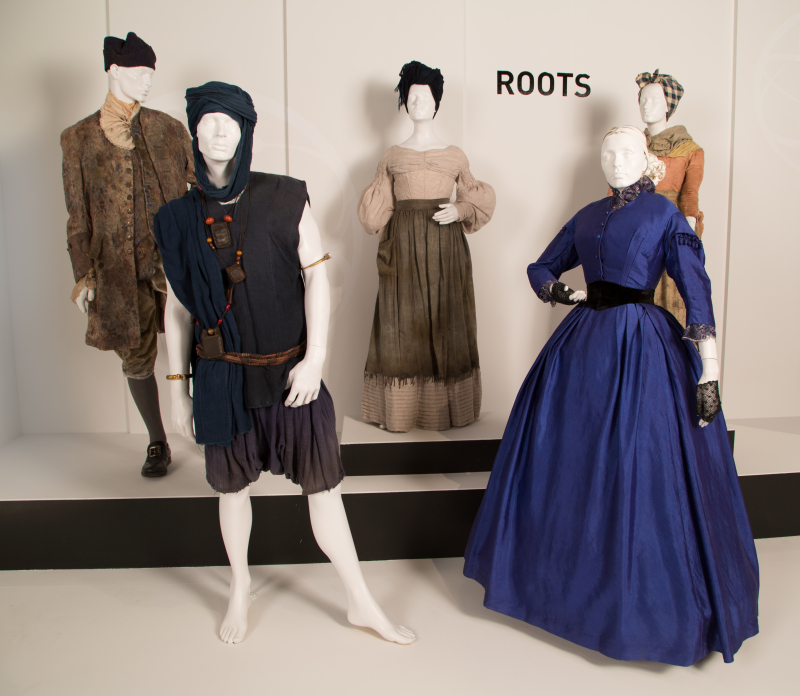 Our show is a musical comedy about the dark edges of love and romance – Rebecca Bunch is a complicated, contradictory character, who is a sartorial “work in progress.”  Her real time clothes are purposeful and people pleasing – it’s in her fantasies that we see her real thoughts and desires.  For instance, the wild, bedazzled turkey bra costume is the alter ego of the prim blue “I Give Good Parent” dress.  She wears the twirling blue chiffon “Settle For Me” gown in a perky 1930s dance sequence that’s undercut by the song’s depressing lyrics about romantic compromise.

From the start of prep on Scream Queens, Ryan Murphy wanted a palette of sherberts and frosty pastels. We wanted to show the division between the Chanels, who ruled the sorority and the girls who were hopeful to be accepted into the sorority. So having the Chanels in pastels, and the others in mostly earth tones, it was a quick distinction, tone-wise.  Also, having the Chanels always in feathers, fur and ridiculous high heels on campus definitely separated them from the pack! 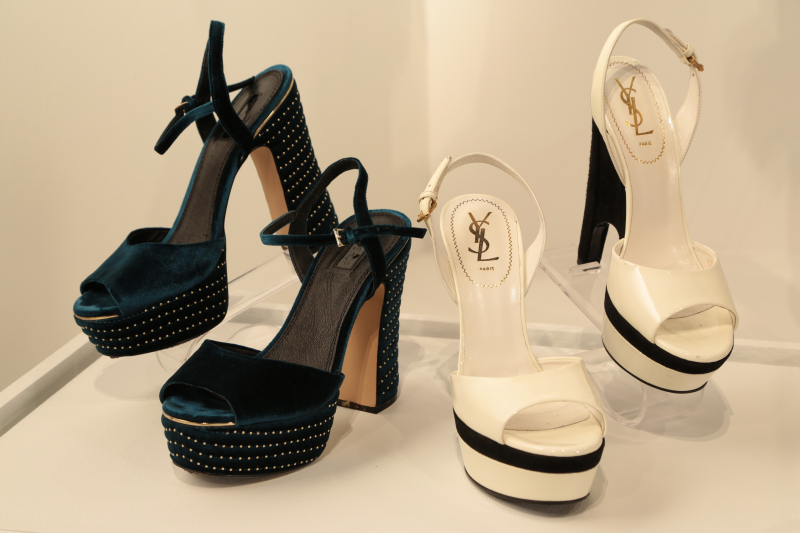 I would want the audience to allow themselves to be entertained by the glamour that is the world of Empire as told through my costume choices.

Can you share the biggest reward of working on this show? 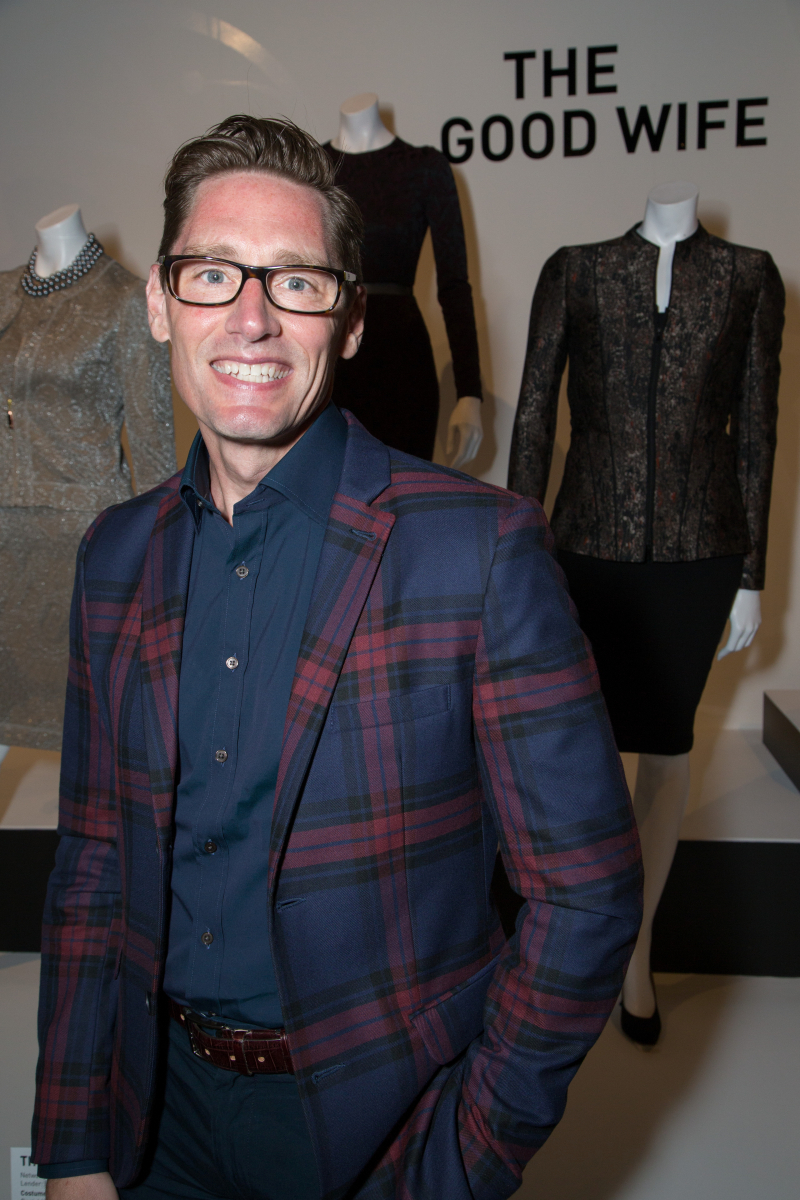 Daniel Lawson in front of his designs at the exhibition opening; photo by ABImages.

Certainly meeting and working with Robert and Michelle King, the creators of TGW along with collaborating with Julianna Margulies and Christine Baranski were two of the biggest rewards for me working on TGW. I really loved doing this show and every costume and every element was incredibly important to me. It was also rewarding to be able to work with a studio, CBS, that allowed me to continuously design looks and closets that changed as the characters and stories changed. That made me feel very satisfied to be able to really help tell the story through the wardrobe and to support the writers' visions as well as the actors' visions.

Being part of an amazing collaborative creative team. 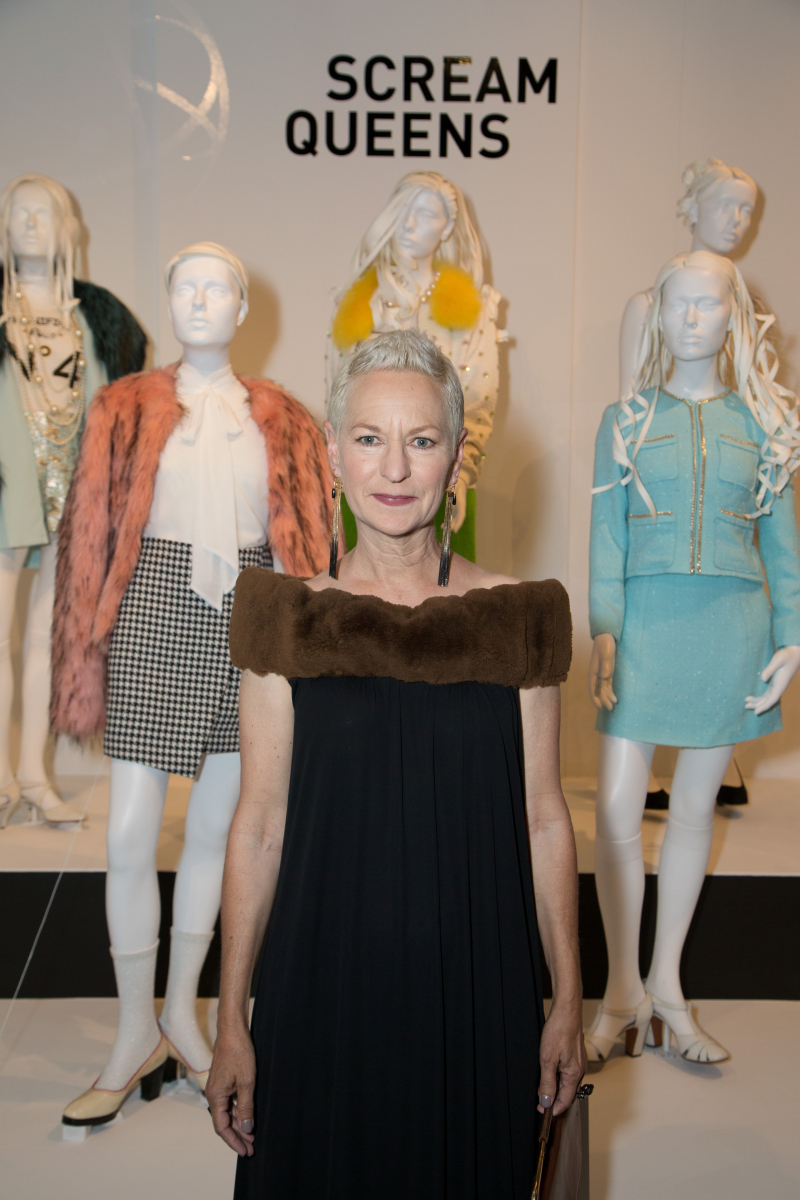 The biggest reward for me, for working on the show, was getting to create all the different character’s costumes and watching them come to life in the fitting room and then on set.

I very proud to be a part of something that so many people respond to and to be able to share my vision with all the viewers is exciting.

What is one of the biggest challenges about working on this show?

I've always said that my biggest challenge on the show was controlling the use of black and bringing as many active neutrals into the palette without losing the sense of appropriateness, while utilizing "pop" colors for emphasis that didn't overwhelm the understated palette of a law firm. 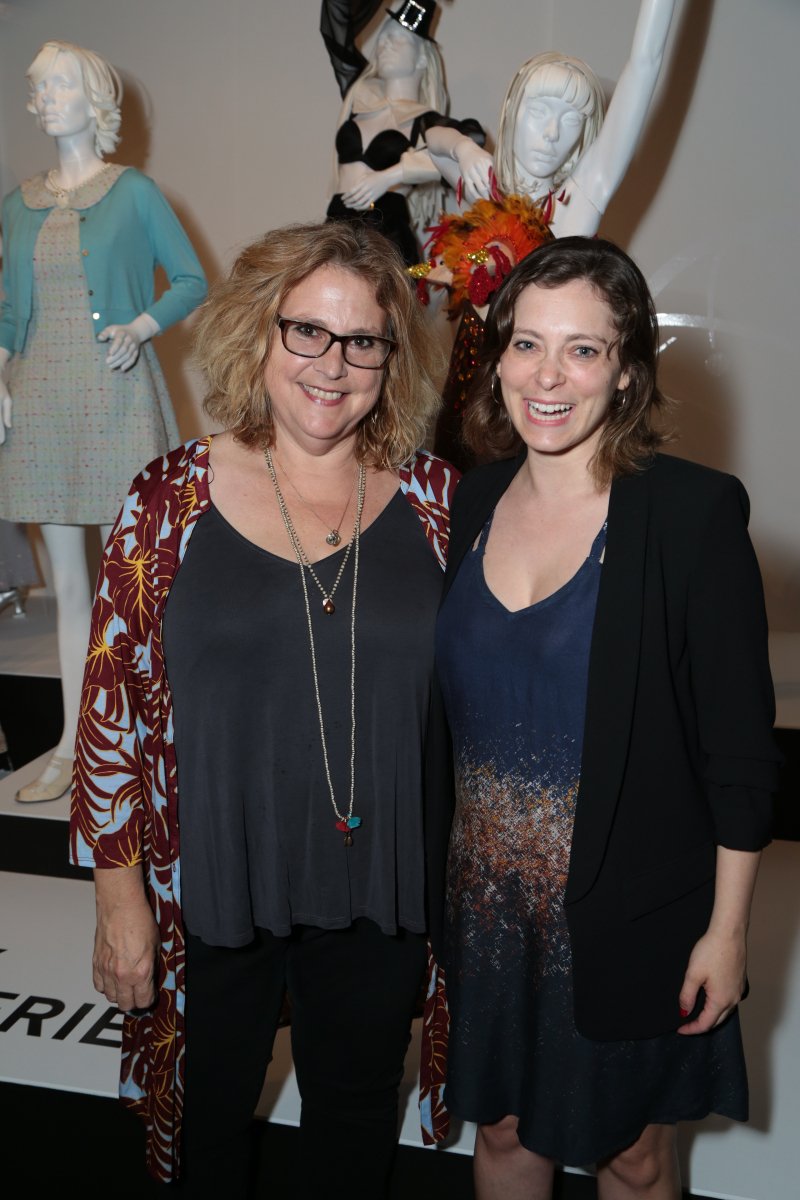 Melina Root and Rachel Bloom at the exhibition's opening night; photo by ABImages.

The time frame – we shoot a new episode every 6 days!

The biggest challenge was also the biggest reward, as stated above.  Having to create so many different characters, no matter how subtle or extreme, was certainly a challenge. It was also a real challenge to continue to find so many pastel options in a season where not many designers were using pastels! Lauren Bott, who was the Co-Designer with me, and took over the show after I left, was a wiz online, unearthing pastel treasures and contacting designers who could either make or send from their showrooms. 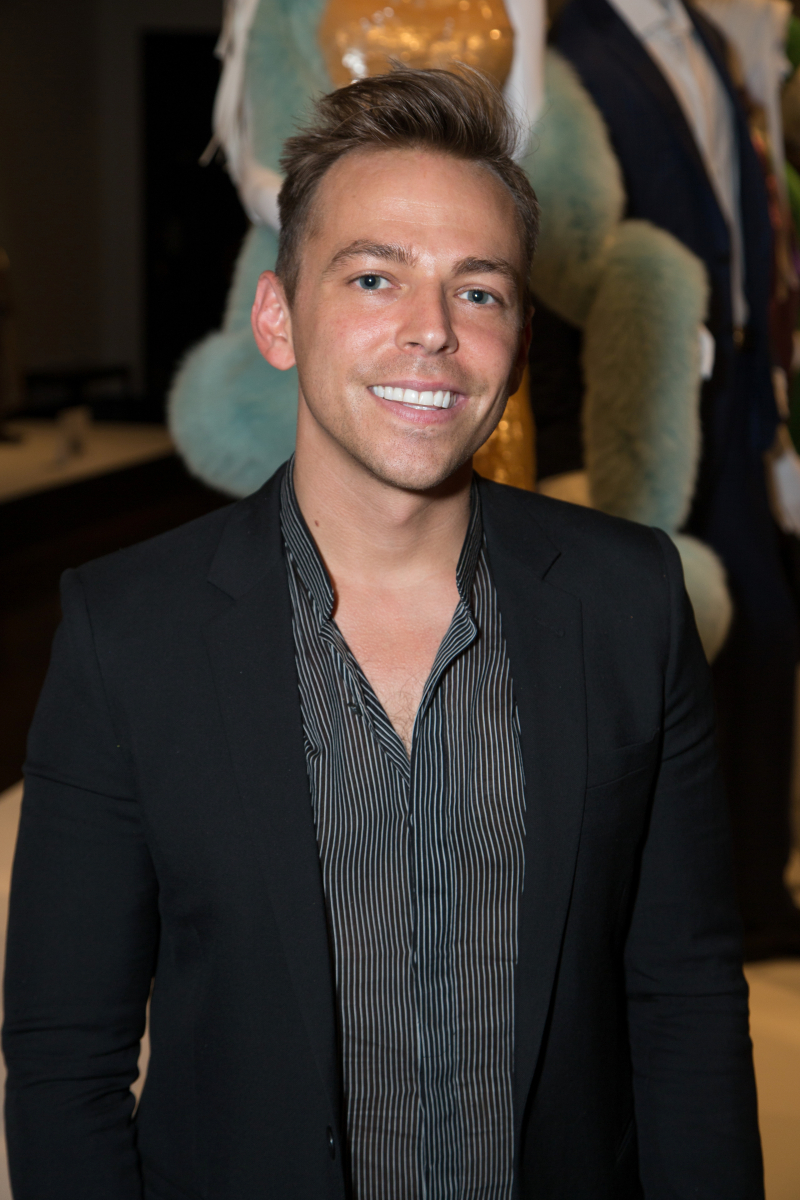 I would have to say time! We only have 8 days to film an episode and then we are right on to the next one! With the meetings, the fittings, the shopping and establishing the episode your actually shooting it can be a lot to juggle at once. 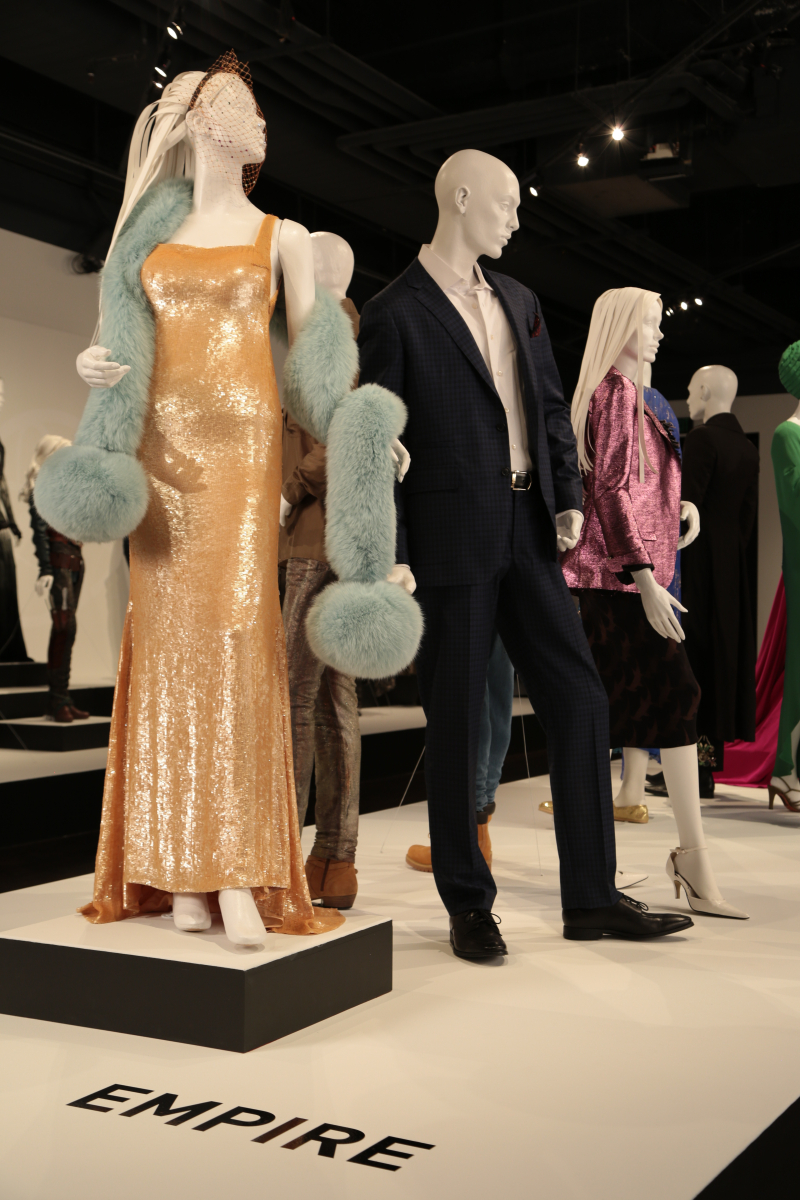 Costumes from Empire; photo by ABImages.

Thank you to all of the talented costume designers who participated in this year's exhibition! You have three more days to see their creations up close…