And the Oscar Goes To…

And the Oscar Goes To…

Last night, Mark Bridges won Best Costume Design at the 90th Academy Awards for his work on the period film Phantom Thread…and he also walked away with more than just his Oscar statue! Bridges previously won the Academy Award in 2012 for The Artist, and was nominated in 2015 for Inherent Vice.

Bridges attended the opening reception of our Art of Motion Picture Costume Design exhibition, where his award-winning costumes are currently on display until April 7 alongside the other four Best Costume Design nominees (Luis Sequeira, The Shape of Water; Jacqueline Durran, Beauty and the Beast and Darkest Hour; Consolata Boyle, Victoria and Abdul). The FIDM Social Media team spoke with Bridges about working with frequent collaborator Paul Thomas Anderson, the challenges of designing for fictions couturier Reynolds Woodcock, and his advice to future costume students. 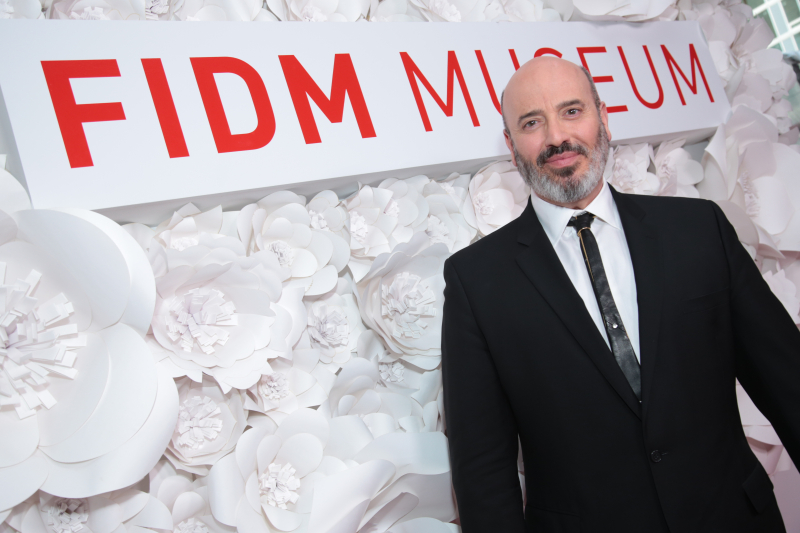 Mark Bridges at the opening of the FIDM Museum’s Art of Motion Picture Costume Design exhibition on February 3, 2018.

I’ve done all of his films – we’ve been working together for 22 years. We started out together, and here we are today with a body of work that I’m really proud of. [Phantom Thread] was just a wonderful experience; we did it in London. Bless him for making a script that allowed me to do what I did…but I say that about Boogie Nights, I say that about There Will Be Blood, I say that about Inherent Vice! 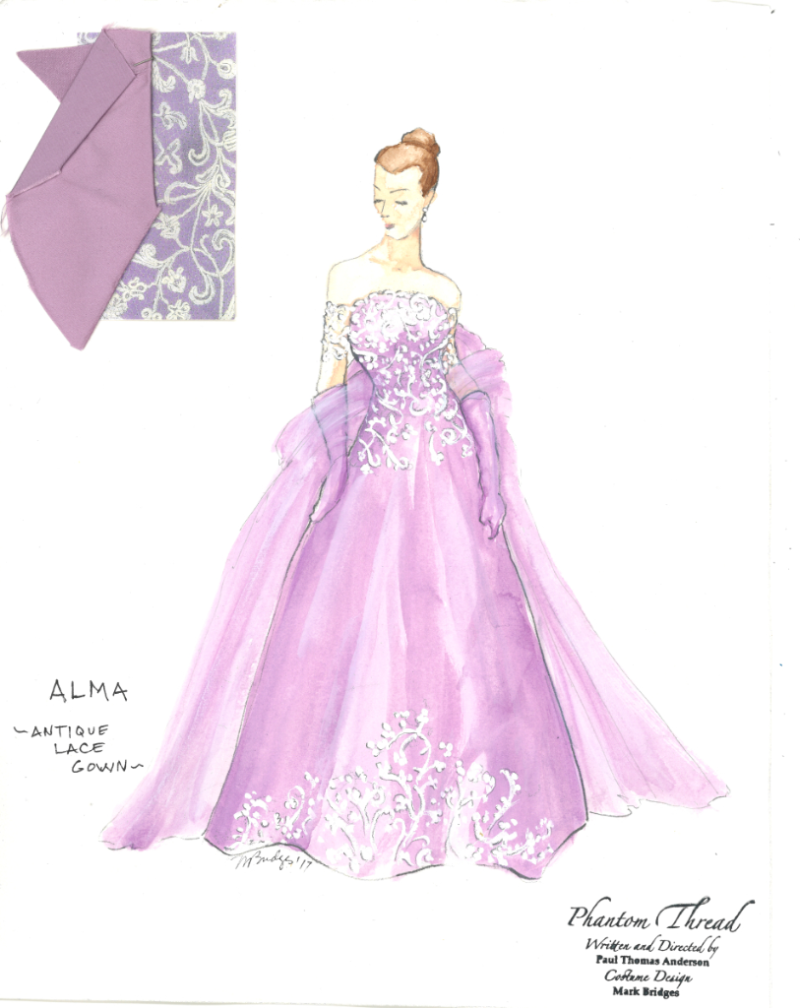 Really, even though the subject matter changes, the process stays the same. We’re trying to serve the piece; how do we tell the story with clothes of that period, whether it’s with textures or colors? Of course we do research. What was going on at that time, and how do we make it specific to Reynolds Woodcock? Those were the challenges – still make it beautiful, photographable, and be able to deliver it, afford it, and tell a story. 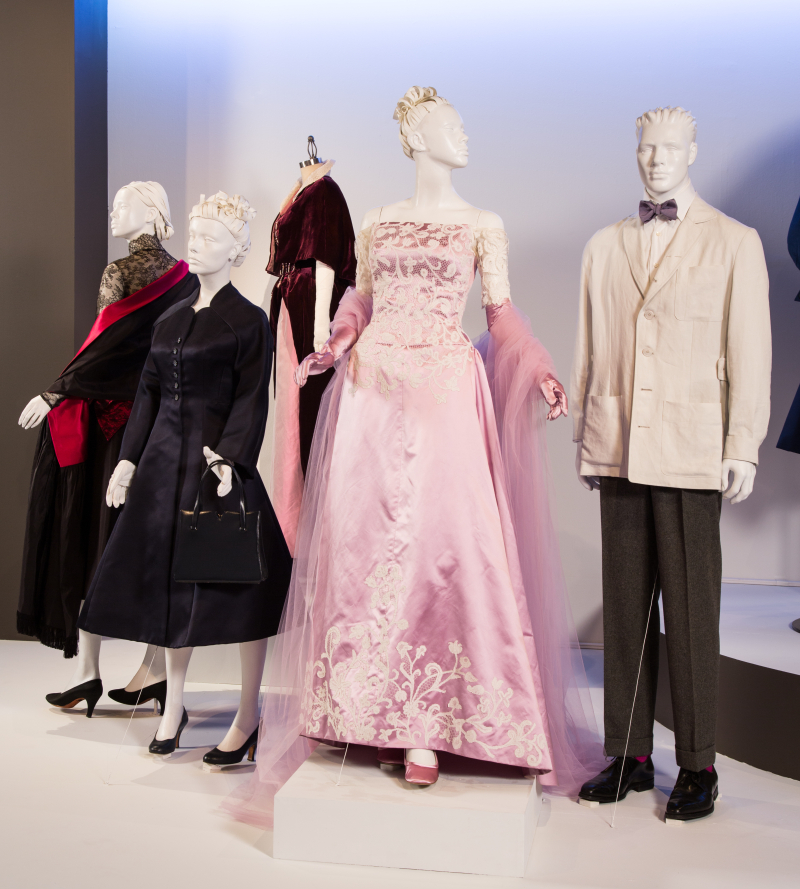 On the pressure of designing for a fashion-based film:

I didn’t really feel pressure – there was pressure doing oil clothes in There Will Be Blood! You just never really know how it’s going to happen. It’s interesting to look back and find that one decision leads to another, such as an actor, or an actor’s idea, or a fabric. I found amazing green taffeta in Rome – I thought, okay, an American heiress, how about the color of money? Let’s have [her gown] be green. You’re inspired by fabrics you find, or an original dress that would never last a shooting day, but has style lines and designs that could help propel our story. It’s a lot of things that end up as the final product. 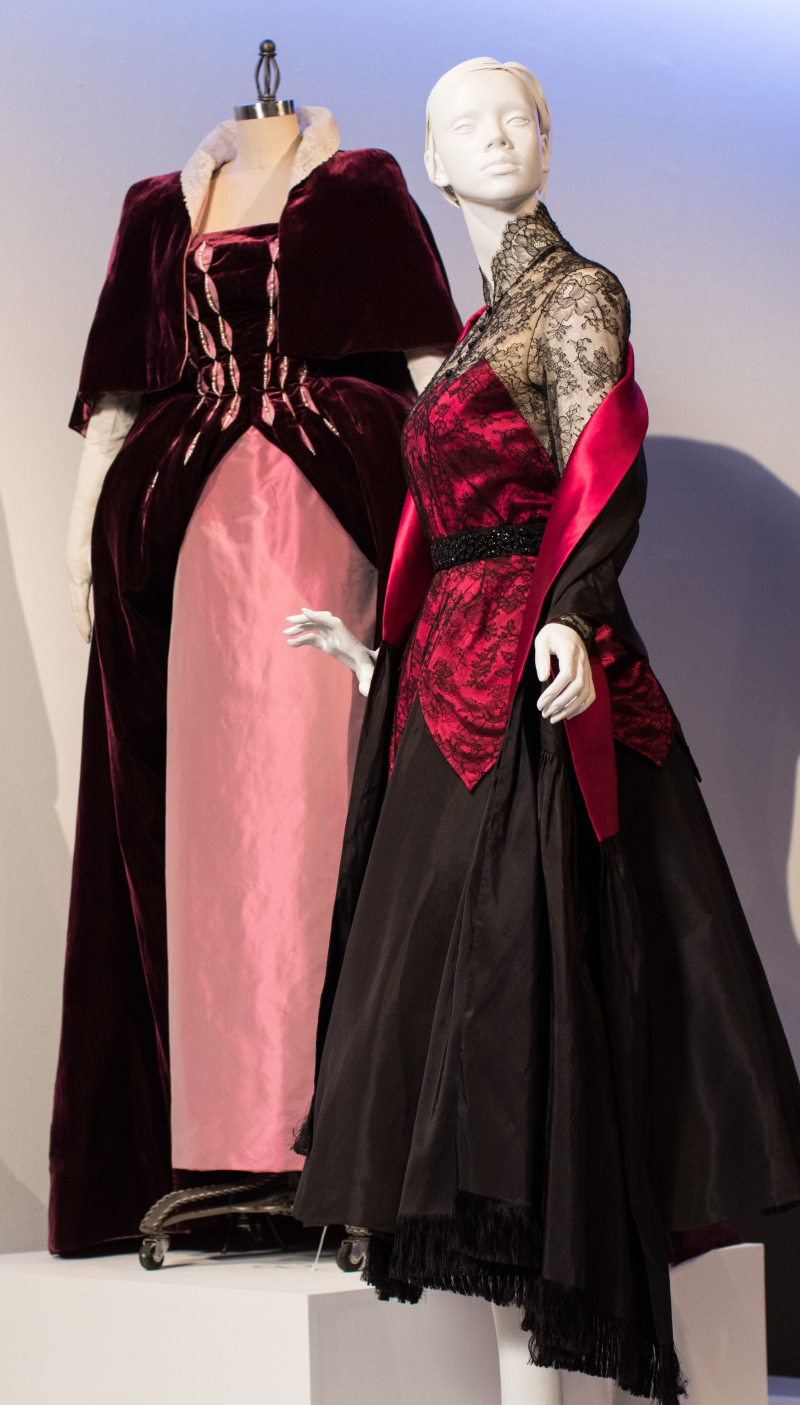 On designing for House of Woodcock in Phantom Thread:

Paul asked if it could be a spring fashion show. That was a bit of a question, because [Reynolds Woodcock] is not exactly the most spring-like person! He’s kind of testy and cranky, and plus it’s London. What is London spring? What is his mood, what are his creative outlets? What are the fabrics that House of Woodcock uses? So what we ended up with in the fashion show was still using velvet, and umbrellas as accessories. If it’s a floral, it’s based in black and purple and dark green – it’s not the happiest floral. It’s just trying to give a sense of a little bit of stormy, but have it be a trademark Woodcock. It’s interesting to sit back and think what the garments are, what would be fresh but also what would say something about him. 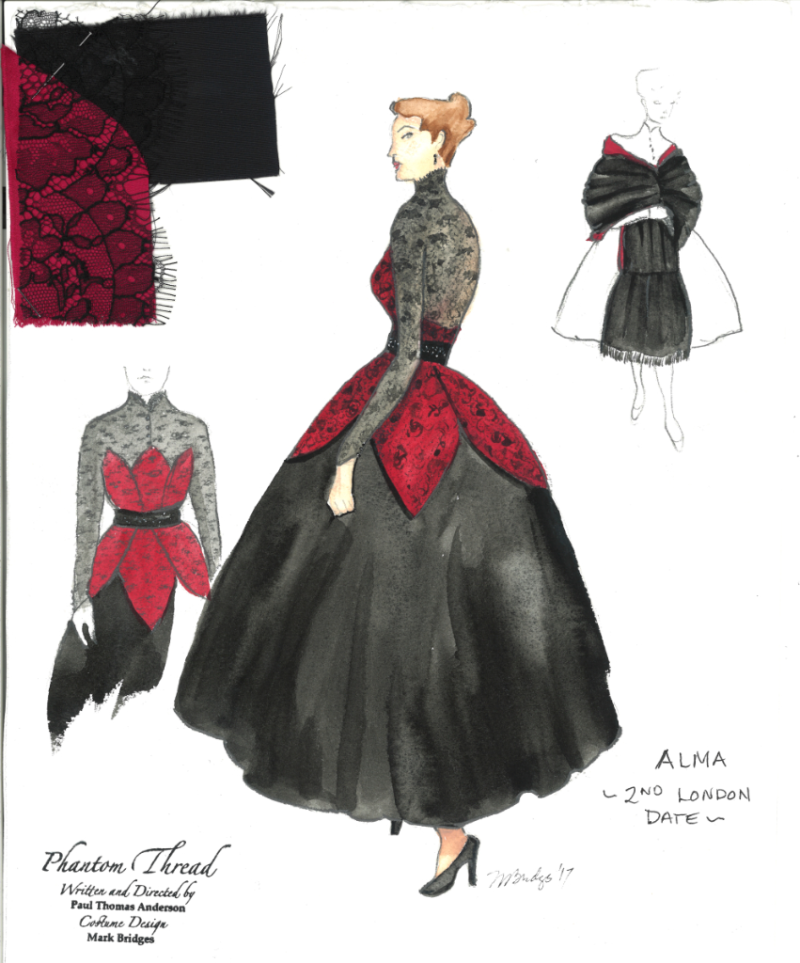 On the characters of Phantom Thread:

Another layer of the designing was the day to day lives of these actors and the characters. It was really fun in that way. There are two design stories going on in this film. We tell the story of real people, like a fisherman’s daughter who becomes a couturier’s muse, and then there is also the design of Reynolds Woodcock. So we have to think about time and place, 1955 London, what are the fabrics that are hallmarks in the House of Woodcock, what kind of man is he – how does he see the world and how does he create? That was interesting too on another level, designing from someone else’s mind-set. I am trying to tell the stories of people’s lives as well as the story of a creative mind. It was really fun to do the two levels of storytelling. 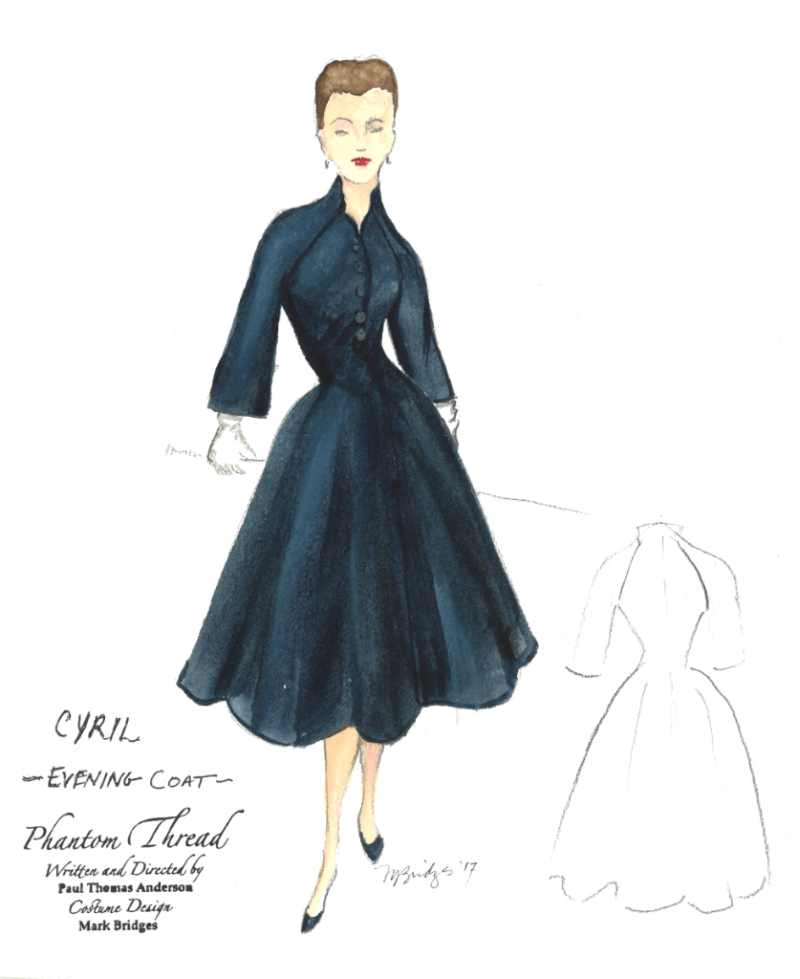 On advice to Costume Design students:

I think at an early stage I had some really good advice: do as much as you can, and see as much as you can. I have notebooks from when I used to go to theater where I grew up…they say “bold plaid – comedy.” What were the hallmarks of costuming for comedy? I love looking at them. It’s second nature now, but then it was very analytical. See things – good things and also maybe some not-so-good things, and then you decide what’s good and bad! I think a big part is staying healthy with your mind with your body; people can get run down. Look around too. We all get too focused – especially in this day and age with computers. Just sit there and watch people go by. What can you tell about their clothes? Who is that person? And then you use that in a character. Museums – love them. Fabric store – adore them. Love it all. 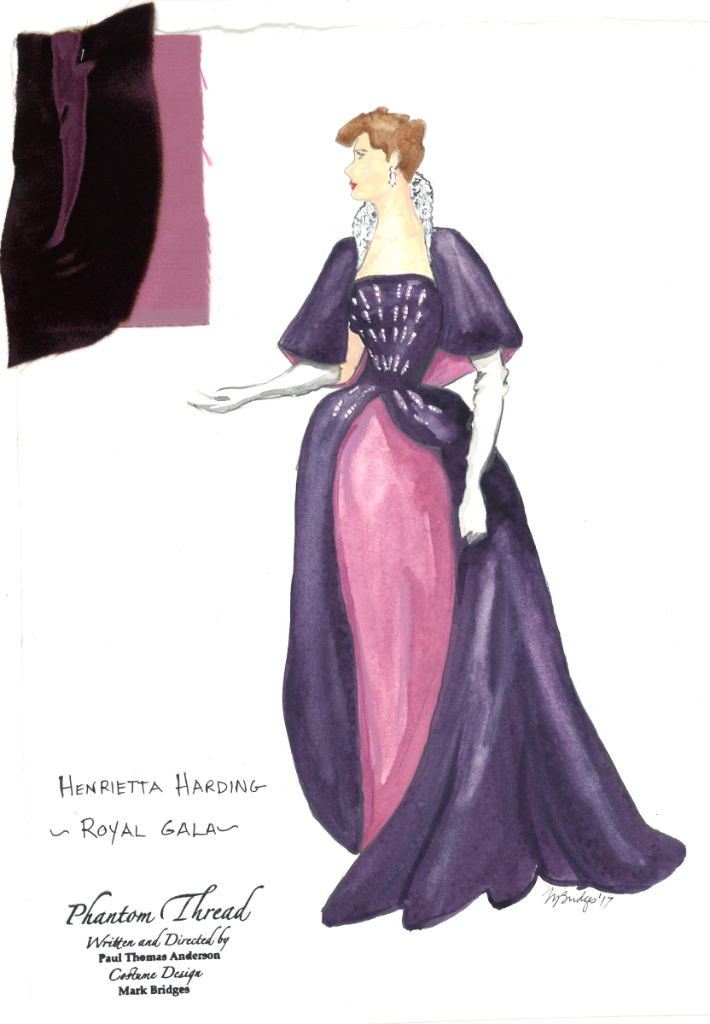