Fashion and costume design are two distinct disciplines, yet their worlds constantly collide. Think of the lone Technicolor scene in a black and white film to showcase Adrian’s spectacular fashions in The Women (1939), or Audrey Hepburn’s transcendent relationship with Hubert de Givenchy onscreen and off.  In the Golden Age of Hollywood, studio designers often dressed stars in films and on the red carpet – after all, who knew their bodies better than their costume designer – and copies of popular costumes sold in department stores and pattern books. More recently, collaborations between couture houses and costume designers have been trumpeted on the pages of Vogue, such as Prada’s partnership with Catherine Martin to create the dazzling party frocks for Baz Lurman’s The Great Gatsby in 2013. 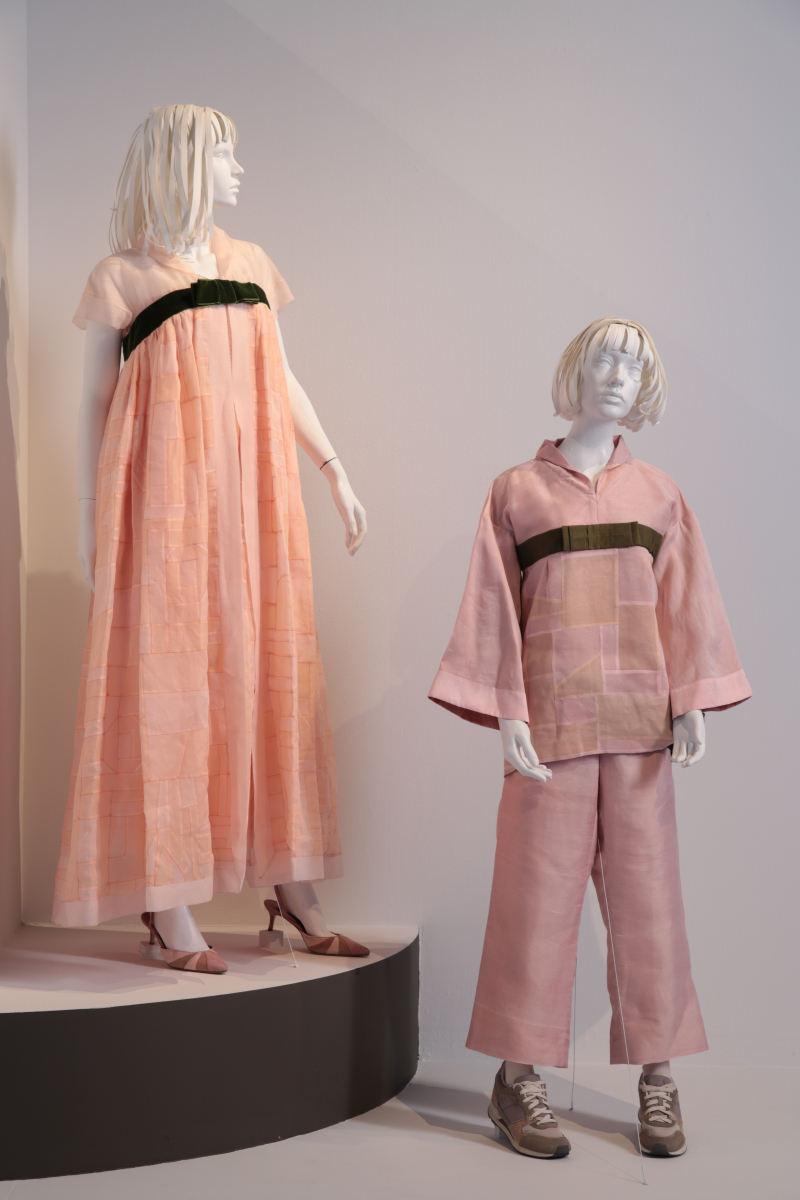 So, it comes as no surprise that fashion darling and chameleon actress Tilda Swinton wore a breathtaking Chanel gown in her role as a ruthless CEO in Okja, Netflix’s touching and imaginative animal rights film from Korean Director Bong Joon-Ho. The ensemble, a modern take on traditional Korean hanbok, and its adolescent doppelganger (more on that later) are currently on display in our Art of Motion Picture Costume Design exhibition. Costume Designer Catherine George dressed the Western cast of the film; her designs reflect the movie’s themes of class, industrialization, and cultural appropriation. 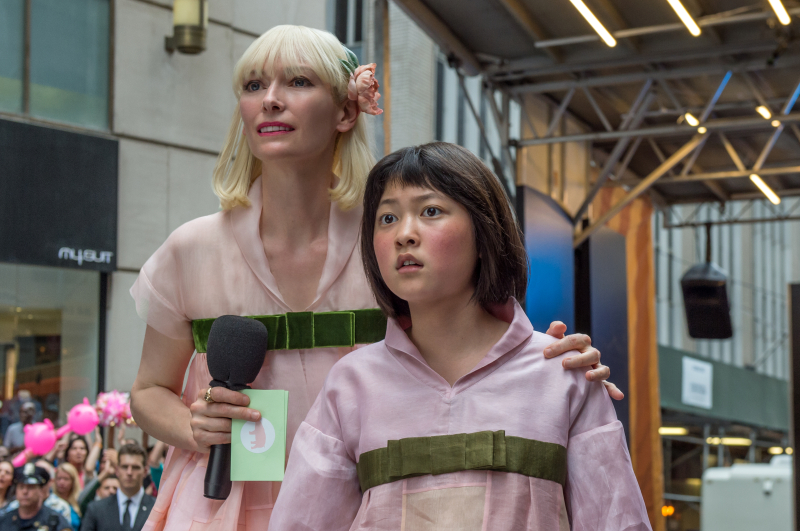 Swinton’s character Lucy Mirando wears the stunning pale pink garment during a parade scene to honor the winner of a competition – a pig from Korea. George, Swinton, and Joon-Ho knew Mirando would want her wardrobe to make a bold impression at the event, and that she would not take cultural sensitivities into consideration. The three eventually found an unlikely source of inspiration in business mogul Richard Branson. George explains, “When he has a big event in a certain country, he’ll dress up in the clothes of that country. It’s sort of funny, quite comical, some of the looks he wears. So we were like, of course we should be looking at a typical Korean dress!”[1]  George describes how the decision to have Mirando wear hanbok lead to the collaboration with Chanel:

“While researching modern hanbok styles, I was looking for a pink color to stay within the theme of the parade, and I came across an image from 2016 Chanel Resort collection. Coincidentally Tilda had actually been to the runway show in Seoul, and remembered seeing the dress. It ticked all the right boxes and the director liked the idea of Lucy wearing Chanel.”[2] 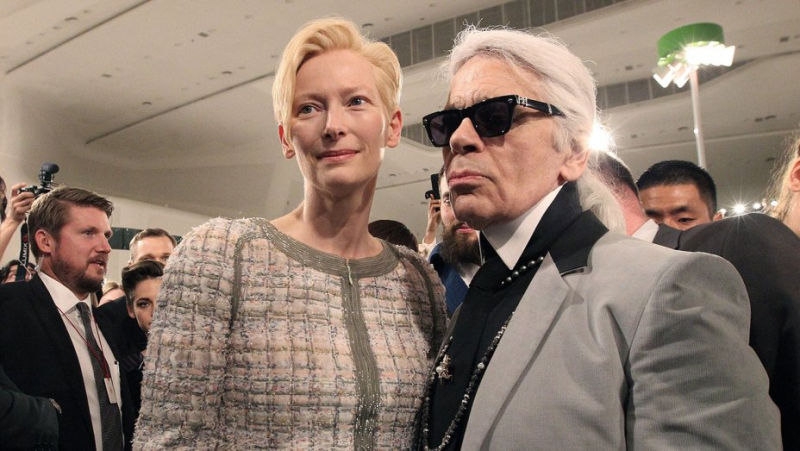 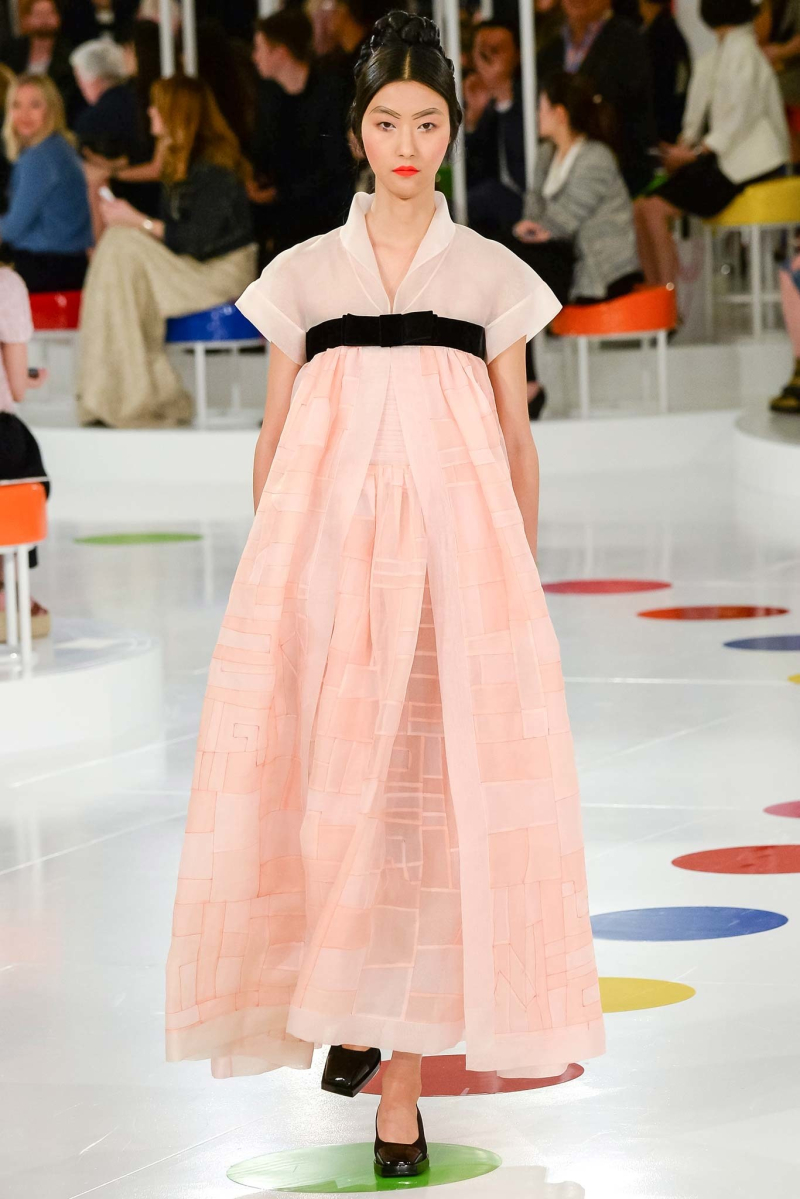 Like all of Chanel’s resort shows, the 2016 collection was inspired by its runway location. The presentation in Seoul reimagined staples of Korean culture – garments, textiles, pop culture, and decorative arts – into a contemporary high fashion wardrobe. A black dress with mother of pearl embellishment was a nod to ornamentation on traditional wedding chests; Korean letters (spelling camellia, Chanel, and Chambon) were woven into the classic Chanel tweed suit.[3] Designer Karl Lagerfeld explained, “The concept is a modern, international version of a typical Korean mood, how we see it for the modern 21st century but with inspiration from the past.”[4] The silk organza hanbok, worn by model Ji Hye Park, was the finale look of the runway show. 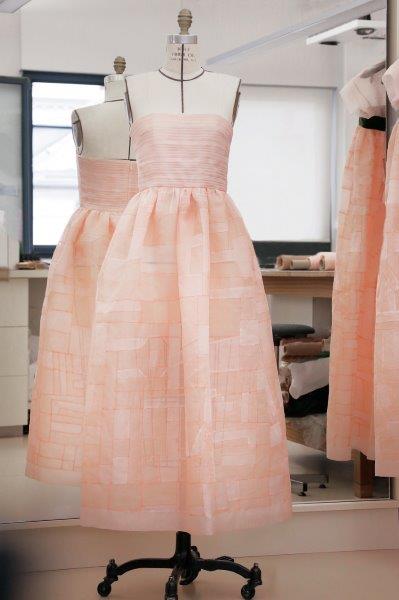 The ensemble under construction at the Chanel Paris atelier. Photo courtesy of Netflix. 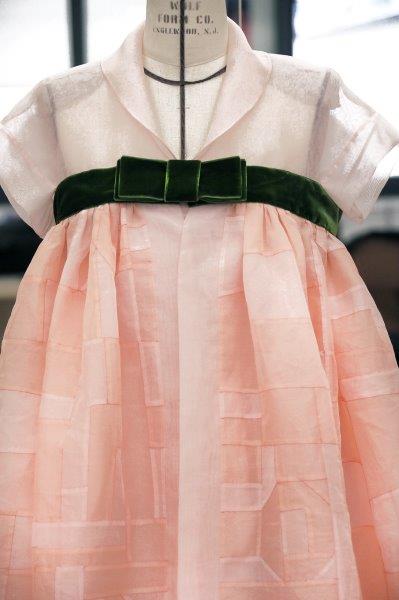 Detail of the ensemble. Photo courtesy of Netflix.

After George’s serendipitous discovery of the perfect hanbok for the scene, Swinton put her in touch with the house. Chanel agreed to customize the ensemble, changing the velvet goreum – the ribbon that sits above the chest – to green to match the fictional Mirando company colors. Swinton then traveled to Paris for fittings, as a new garment was created specifically for her measurements in the couture atelier. Even the textile, a jogakbo patchwork, was produced in the traditional style: irregularly-shaped pieces of organza were triple-stitched together at the seams (a technique known as gekki) to give the material its unique ‘window pane’ appearance.[5] 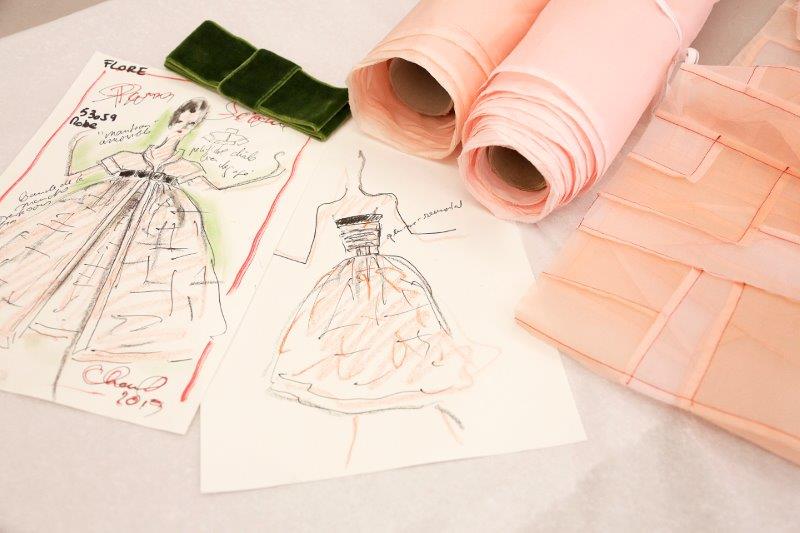 Chanel sketches and fabric details at the Paris atelier. Photo courtesy of Netflix.

Though costume designer Se-yeon Choi outfitted the film’s Korean cast, George developed the parade look for Mija, the young owner of the winning pig played by actress Seo-Hyun Ahn. George suggested a two-piece pajama set to match Swinton’s hanbok – a juxtaposition that highlighted Mirando’s cultural naiveté, as well as a suitable ensemble for Mija’s action scenes. The costume was constructed by an experienced hanbok maker in Seoul using the same style of jogakbo patchwork. In our galleries, you’ll notice the embroidered ‘Lucy Mirando’ signature on Mija’s left sleeve cuff, a subtle nod at Mirando’s attempt to control the determined young girl. 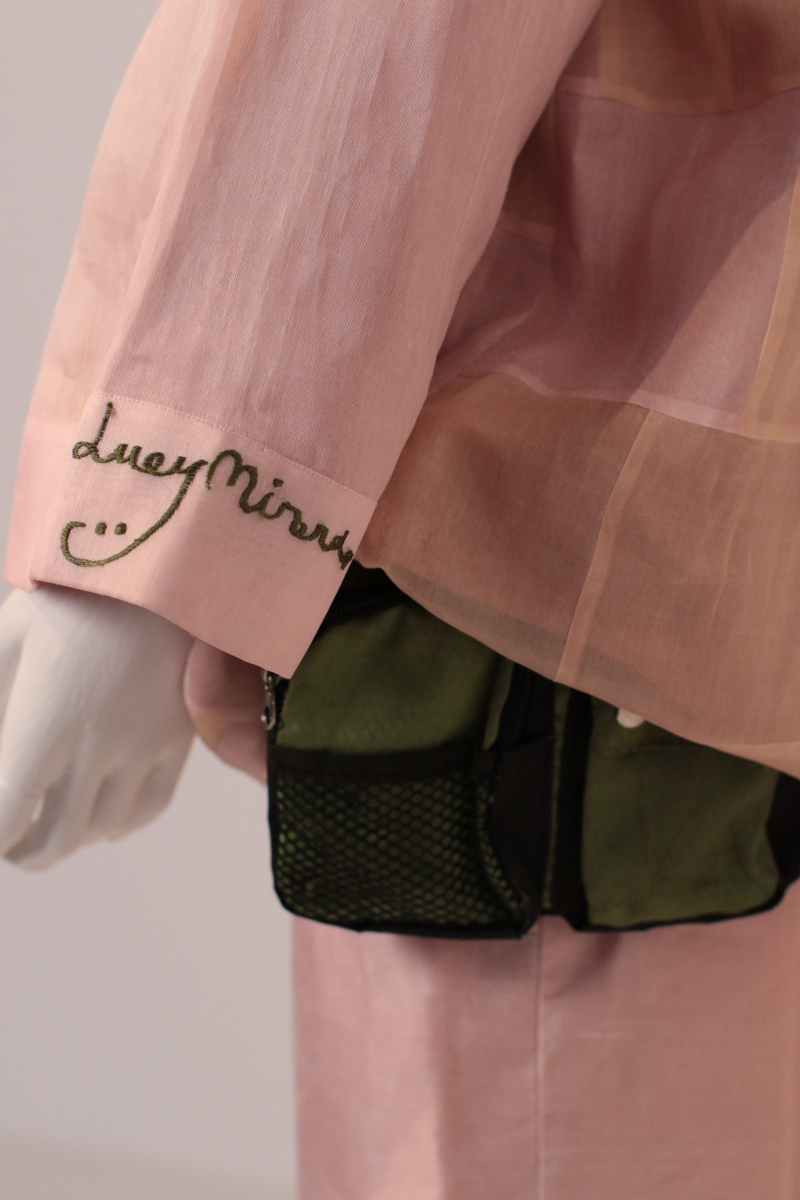 Detail of embroidery on Mija’s sleeve.

The FIDM Museum contacted Netflix to display both garments in our exhibition, and the company generously facilitated the hanbok loan from the Chanel archive. The ensemble was shipped via fine art handler and delivered in an impressive crate, and an installation specialist from the Chanel archive arrived to dress the look alongside the Museum team. The finishing touch? Lucy Mirando’s pale pink suede kitten mules by Manolo Blahnik, provided by Netflix along with Mija’s matching costume (including her trusty green fanny pack!). 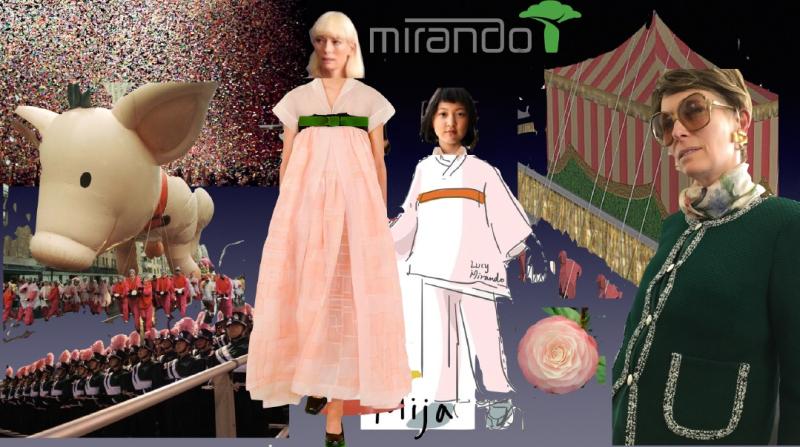 Of course, Okja was not the house of Chanel’s first foray into film. In 1931, Samuel Goldwyn of United Artists famously enticed Coco Chanel to come to Hollywood and dress his stars on and off screen to be “six months ahead of fashion.”[6]  After initial hesitation, Chanel agreed. Her first film, the musical comedy Palmy Days (1931), featured active sportswear – a perfect fit given Chanel’s contributions to casual attire. Though the film was a success, her costumes were not particularly celebrated. In fact, it quickly became clear that Chanel and movies were not meant to be. She disliked that understated fashions did not translate on screen, and had no patience for divas or the Hollywood lifestyle. Palmy Days, Tonight or Never (1931) and The Greeks Had a Word for Them (1932) were the only projects she completed for Goldwyn.

[2] Catherine George personal notes on Okja supporting materials provided to the FIDM Museum for use in the Art of Motion Picture Costume Design exhibition, January 2018.