Today’s post was written by our 2018 Santamaura Study Grant Intern Brian Centrone. After years of being a writer and an English professor, Brian returned to school to do an M. A. in Costume Studies at New York University. His research focus has been menswear, where he has looked at the role gender, sexuality, and masculinity played in men’s eighteenth century breeches, as well as the impact nineteenth century anxieties about dress and sexuality had on the persecution of Oscar Wilde, and the establishment of the homosexual stereotype/identity. He is always looking to fill the gaps in the history of menswear—of which there are many. Brian’s interest in the developments that occurred to men’s suits during the end of the nineteenth century led him to this investigation on the origins of the trouser crease. 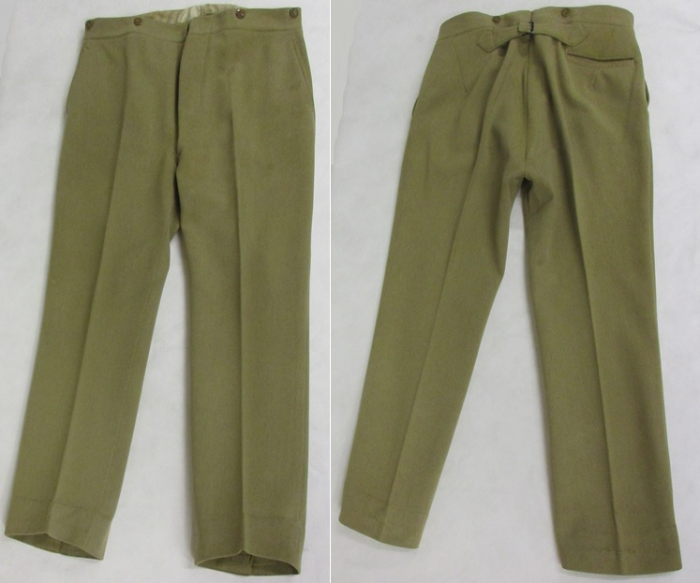 Creases in center front and center back of suit pants
c. 1893
Gift of the Napa County Historical Society
S2012.1001.2B/B

Among the items in the FIDM Museum’s Study Collection is a pair of perfectly creased men’s trousers. The crease has been a part of menswear for so long, we think of it as having always been there. As with any great fashion trend—even ones so long-lived—the crease had to get its start somewhere.

Many scholars agree that the 19th century saw great changes to menswear, particularly men’s trousers. One of the most significant changes—a change that would have a lasting effect—was the inclusion of an elongated crease that ran down the front and the back of the trouser.[1] The Museum’s suit has trousers with creases that run all the way up to the waist on both the front and the back; it was originally dated between 1880 and 1889 by staff. However, as many scholars agree, the appearance of the center front and back crease didn’t come into vogue until the 1890s with the advent of the trouser press, yet the date this press was introduced is vague. According to C. W. and P. E. Cunnington, the trouser press was invented c. 1890 onwards,[2] with James Laver fixing the date in the mid-1890s.[3] But I have discovered the trouser press, and the front and back crease, may have both gotten their start a lot earlier than suspected. 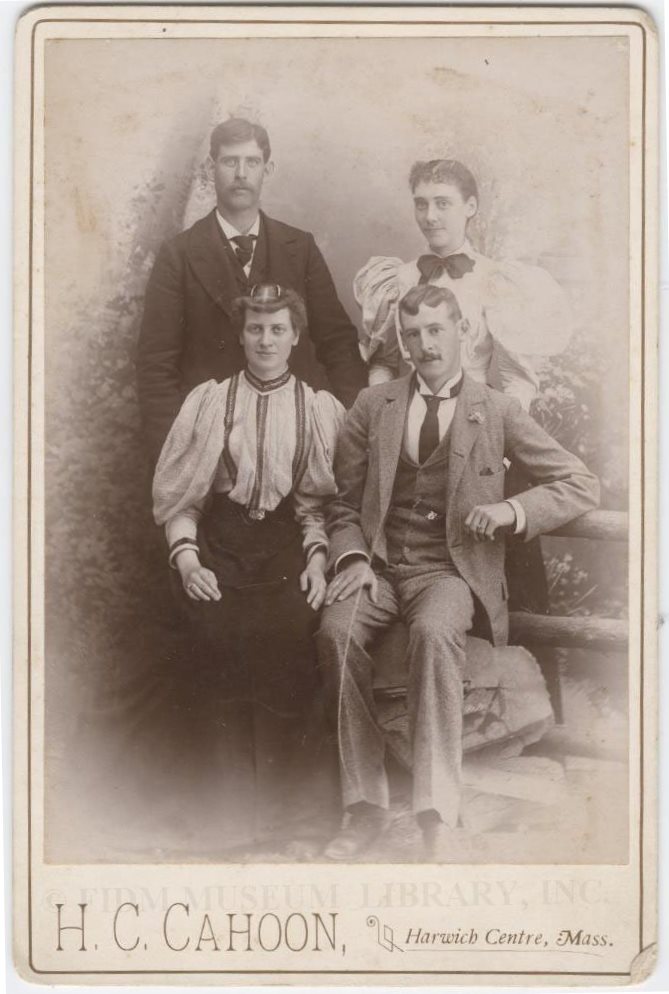 Several scholars acknowledge that the crease dates to the 1880s. In an attempt to deal with baggy knees, a crease was added to men’s trousers in the latter part of this decade.[4] This feature originally ran from the knee down. A c.1883 advertisement for John Hamilton & Co’s Trousers Stretcher claims, the stretcher “was the only effective instrument ever introduced”[5] to help rid or prevent the issue of bagged knees. This Trousers Stretcher transformed trousers with bagged knees “Before Use” into perfectly streamlined trousers “After Use.” Notice, however, that the “After Use” illustration does not include an obvious crease. This early product either did not or could not create the permanent center front and back crease that scholars feel became possible in the 1890s. 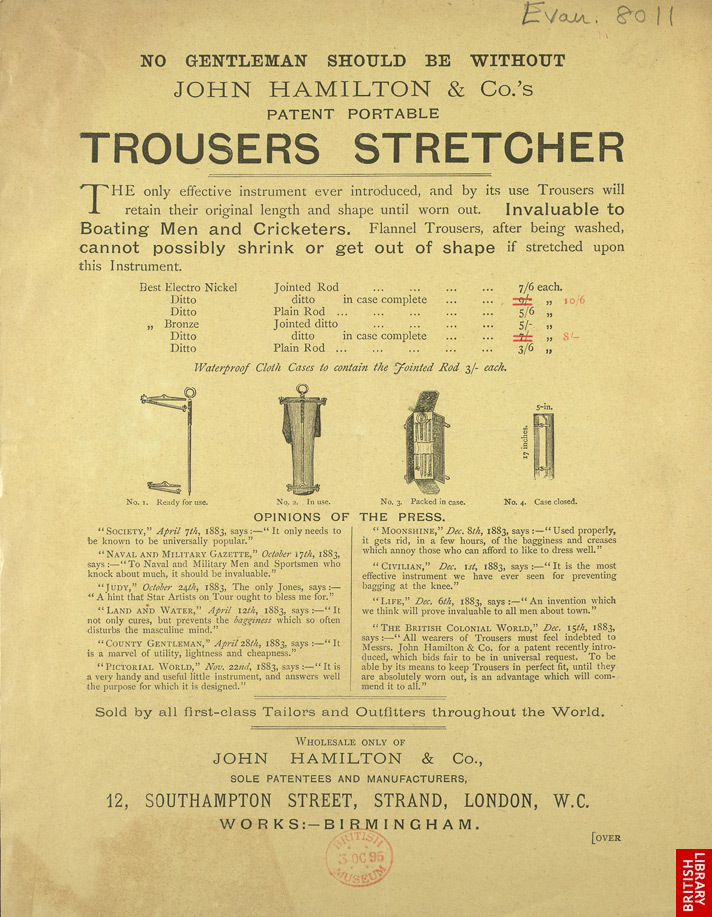 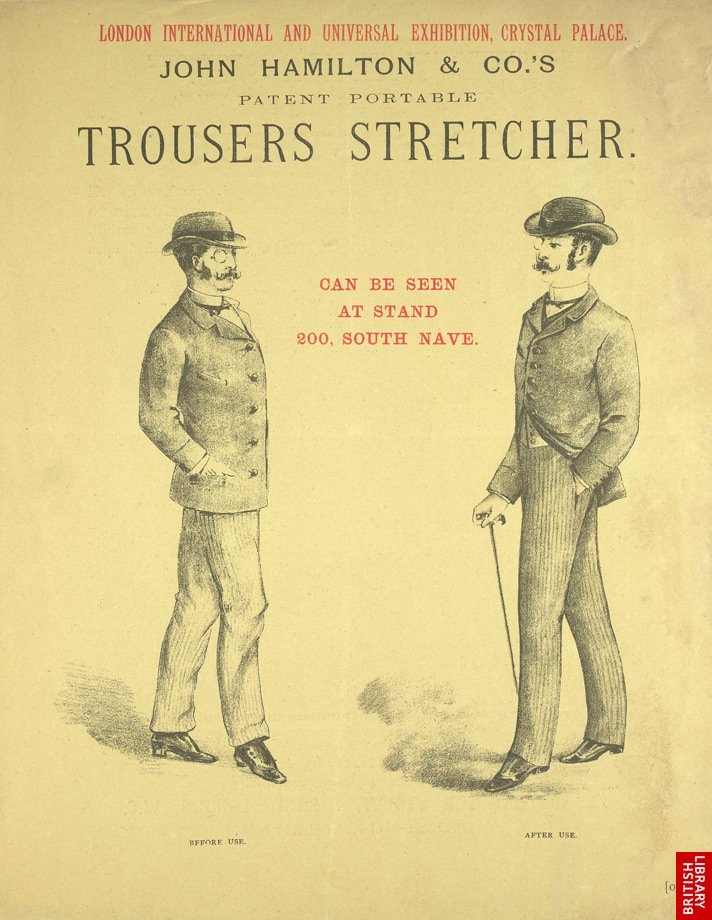 Advertisement for John Hamilton & Co’s Trouser Press. (front and back images) 1884. Courtesy of The British Library.

By 1885, mention of the crease appears in print. Ads taken out by Delury, English Tailor and Habitmaker in the New York Times in May and October announce trousers would be worn wider, knees would be cut at 20 inches, and “show pronounced crease down both front and back.”[6] Though it is not mentioned if the creases began at the knee or waist, this reference of a front and back crease does predate when scholars claim it appeared.

Two newspaper reports from 1888 and 1892 not only show how the implementation of the crease was favored by the “fashionable youth”[7] of the day, but how this change in menswear bore weight. The 1888 article, “Wrinkled Trousers,” from the San Francisco Chronical states, “The crease in the trouser–leg is apparently a small and trivial thing, but it is full of significance. Its growing prevalence on the sidewalks of San Francisco shows that though we are some years behind the Eastern world in our adaption of European ideas we are moving with the mob.”[8] A few years later in 1892, Renk Bache in the Boston Daily Globe announced in “How To Be A Dude,” that “Until within recent years it was considered that a gentleman’s costume should not have a brand-new appearance, that he ought not to seem as if just from the tailor’s shop, any more than he should smell as if just from the barber’s. Ideas as to this point have been turned upside down.”[9]

Interestingly, both articles inform us that myths surrounding how creases were pressed and kept in trousers abounded. These myths included placing the trousers between mattresses,[10] or lining the knees with thin pasteboard, and not sitting down, [11] to even “owning some patent machine for keeping the legs of his unmentionables straight.”[12] Bache does attempt to debunk these myths, adding, “He has them piled together on a shelf, each garment carefully folded. When he makes a change he always takes the lowest pair. Thus no pair is worn more often than is necessary, and the more weight of the trousers keeps them properly creased. Here is the secret in a nutshell.” Bache is quick to add that, “Of course they must be sent to the tailor’s at intervals for ironing.”[13] 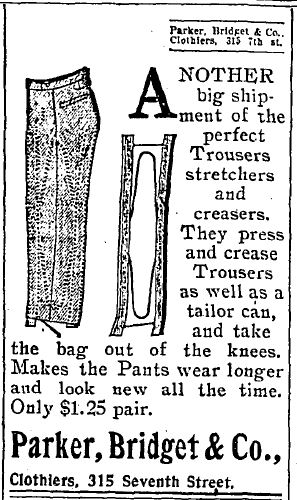 Advertisement for Trousers Stretcher and Creaser by Parker, Bridget, & Co. The Washington Post, May 11, 1896. 8.

The earlier belief that a man might own an at-home press would, in a few years, be possible. In 1896 an ad for a “Trousers Stretchers and Creasers” machine appears in The Washington Post by Parker, Bridget, & Co. The ad claims the product can “press and crease Trousers as well as a tailor can, and take the bag out of the knees.”[14] This ad suggests that some point between John Hamilton & Co’s Trousers Stretcher from 1884 and Parker, Bridget, & Co’s Trousers Stretchers and Creasers from 1896, the machine advanced from seemingly only stretching trousers to also creasing them. 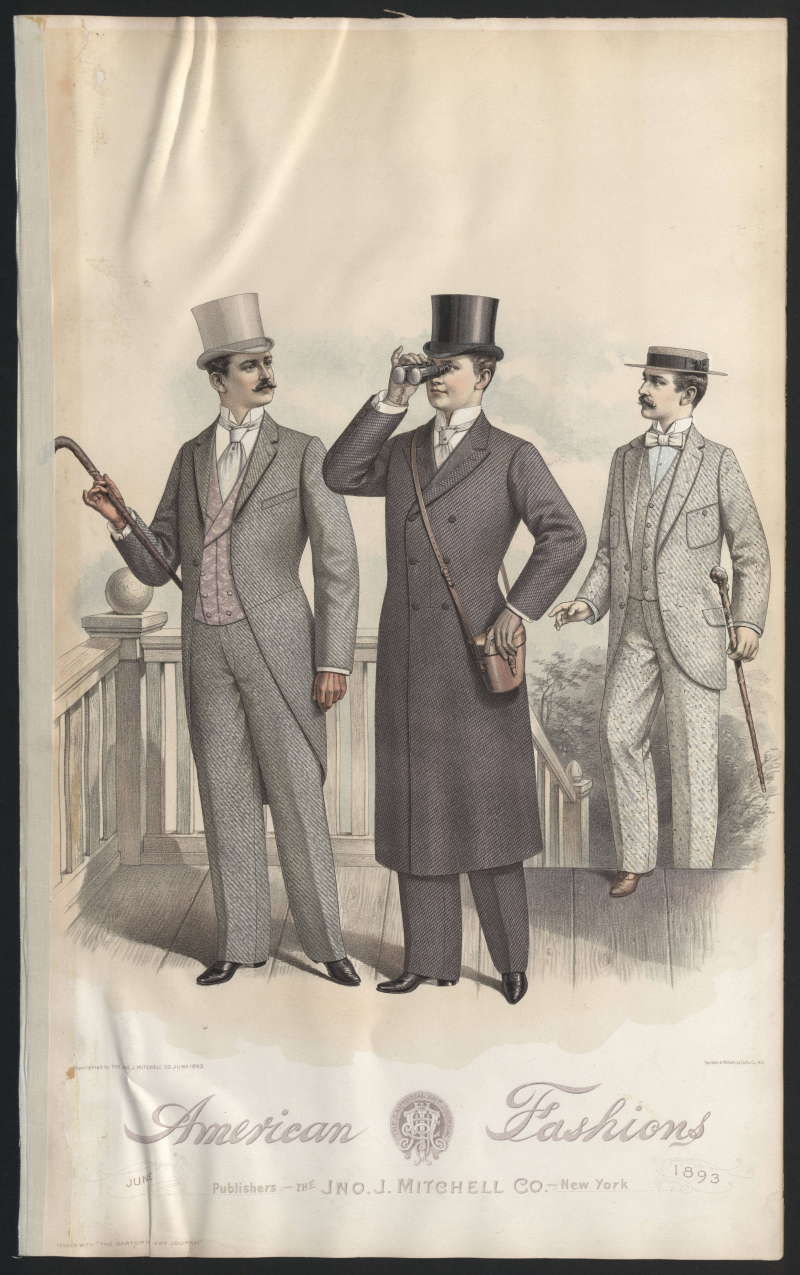 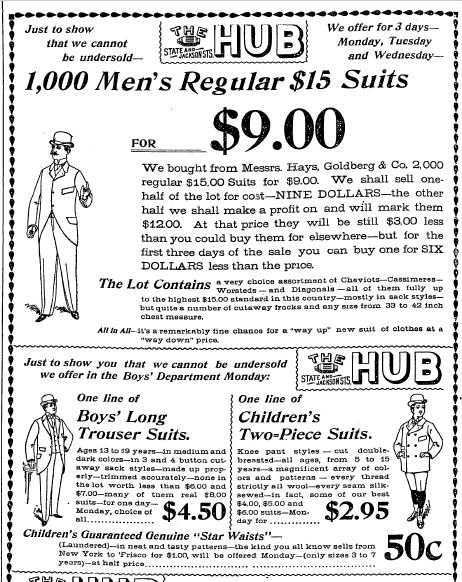 Fashion plates and newspaper ads of the 1890s give us a good idea of when this happened. In 1893, American fashion plates in the collection of the Costume Institute at the Metropolitan Museum of Art begin to capture the appearance of the center front and back crease.[15] By 1894 onward, front and back creases dominate the trousers depicted in those plates. In 1895, The Hub[16] took an ad out for their discounted suits, and while it doesn’t make mention of creased trousers, the illustration shows a gentleman in creased trousers—from the knee down. However, the lower ad for their boys’ long trouser suits shows the crease running the full length—a feature scholars too feel was created, like their adult counterpart, with the advent of the trouser press in the 1890s.[17]  Also in 1895, ads for men’s Duck Trousers (pants made from varying weights of cotton canvas) featuring the “Indestructible Crease” appear frequently. What gave name to the “Indestructible Crease” and why it pertains to Duck Trousers needs further investigation. 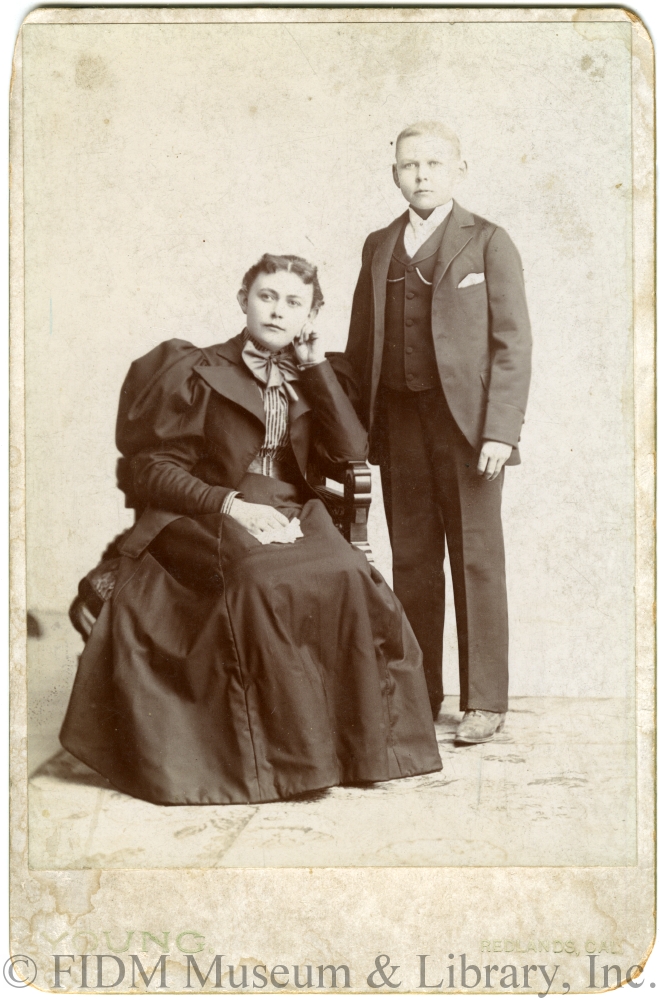 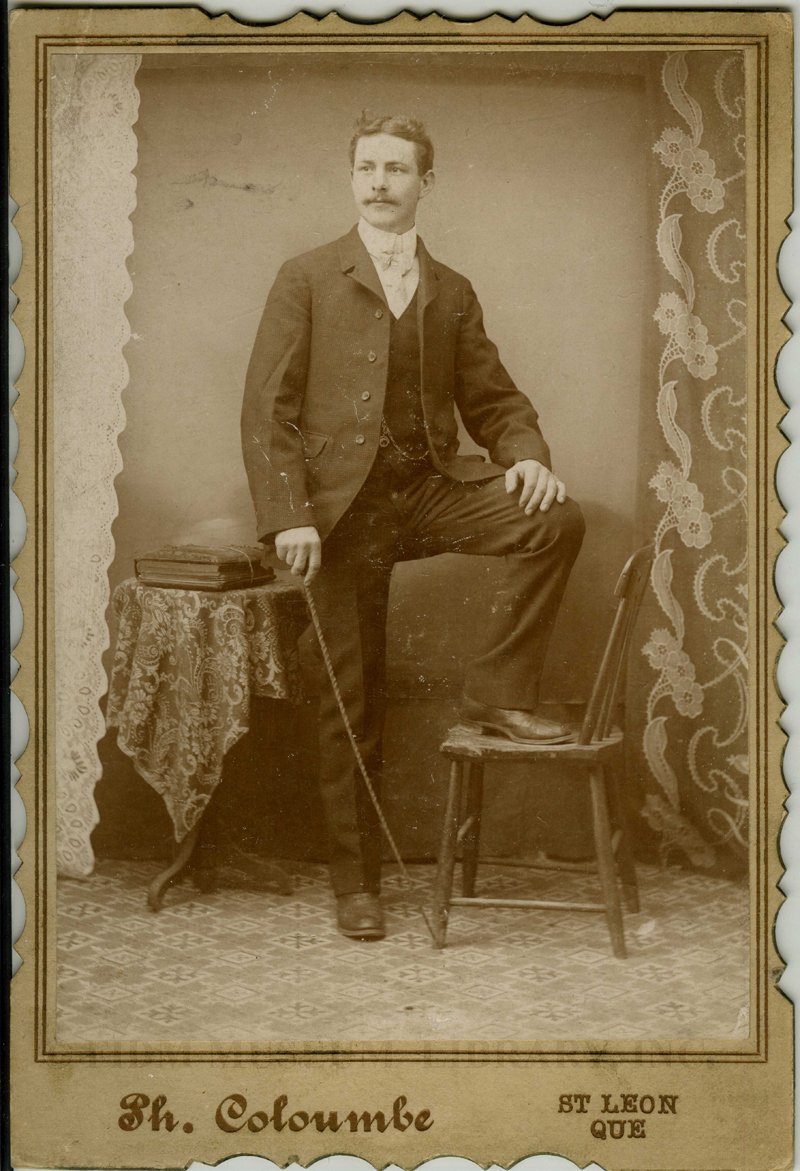 Just as with painted portraiture, men, women, and children often showed off their best or new clothes when having their photograph taken. The photographs above highlight how pristine these suits look, thanks in part to the elongated crease. The crease allowed fashionable boys and men to always look their best. For centuries men have cared about how they looked. Presentation mattered because it reflected their status in life and how they wanted society to see them. It is clear from the photo above that the sitter wanted to put his best foot—or rather best creased trouser leg—forward.

While the exact date of the trouser press’s invention is still unknown, the frequent appearance of the center front and back crease in ads and fashion plates starting in 1893 does suggest that a few years into the fin de siècle of the 19th century, the vogue for the elongated crease took hold, most likely because the Trousers Stretcher evolved into the Trouser Press, able to add a permanent pressed crease in men’s trousers, keeping them looking brand new. Undoubtedly, for this reason the crease, which started out as a fashionable trend, was carried into the twentieth century, and shifted into a staple of menswear design we still recognize today.

[5] The British Library dates this ad at 1890 and refers to it as the Trouser Press, though the ad itself states the machine is called the Trousers Stretcher, while the only date marked on the ad is the 1883 date associated with the “Opinions of the Press” listed on the front.

One response to “Intern Report: The Trouser Crease”