Recently, the FIDM Museum had the honor of hosting Academy-Award winning costume designer Alexandra Byrne for a behind-the-scenes tour of our gallery and Collections storage. In between marveling at Empress Josephine and admiring a rare 16th century petticoat front, we asked Alexandra about her impressive work on the film Mary Queen of Scots – which we are thrilled to include in the Art of Motion Picture Costume Design exhibition, opening February 6, 2019. Learn about her unique choice to outfit the cast in denim, and how this project compares to her two other Queen Elizabeth films, Elizabeth (1998) and Elizabeth: The Golden Age (2007). 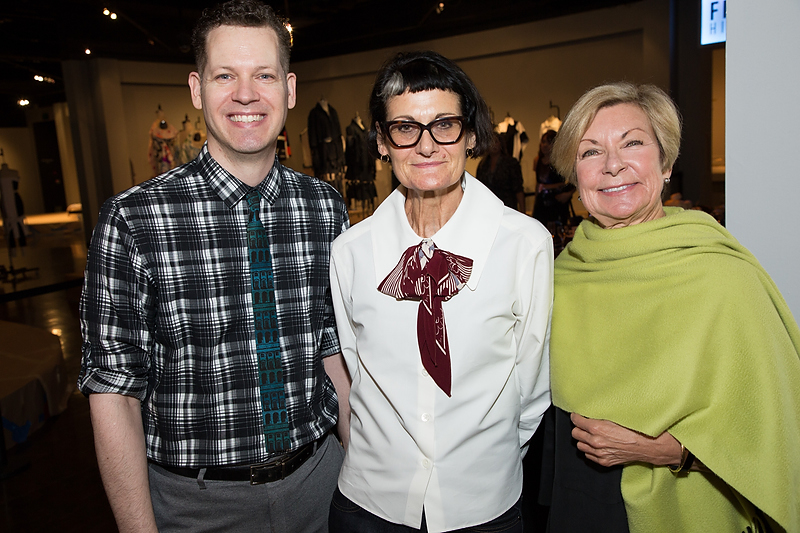 What led you to the decision to costume the entire film in denim?

Partly it was budget. I knew we needed to make everything that could be worked in a factory situation easily, so you go to the denim factories. And I wanted the men to be sexy – denim has a very easily translatable language and it’s a fabric that gets better with wear. For Mary’s story, it was a pragmatic reason: the denim decoration of her clothes is to do with the dirt and the wear.

I really didn’t want a film that was ‘here comes another queen in another frock.’ I think I’ve done that. And it wasn’t that story. So then it became very interesting to limit your menu and have one fabric that you are manipulating to tell your story. The first thing we did was to make an Elizabethan doublet in denim, and that was a moment because it was horrible! It was the worst kind of ‘costumey’ costume and I went…okay, take a breath. It was quite a moment, and I thought oh this is wrong, this isn’t going to work. And then I did take a breath and I worked out that we carry so much denim language in our heads, we have so much preconception of denim. It had to be a blend of ancient and modern. I had to learn how to use introduce modern denim language into the Elizabethan era to achieve the immediacy I wanted, but to still give it a period credibility. And that was fascinating because it meant that you couldn’t draw it. You just had to prototype it. Because it was literally just constantly the juxtaposition and the balancing of that information. So if you put orange top stitching in, is that too much? Does that work? With Saoirse [Ronan, playing Queen Mary] the first thing we did was build a fitting toile. We did it in denim – I thought ‘we might as well dive into this!’

How did using denim bring a sense modernity to the film?

The main challenge I felt was to make the men look sexy. Elizabethan is not a sexy period for men. So denim lends itself to that. And it’s such a different story from the two Elizabeth films [I’ve previously done]. I wanted clothes that had an immediacy today but still credible for queens of the period, and I wanted a fabric that got better with wear, because they didn’t have dry cleaners. I suppose what took me to it is those clothes would have been like our jeans; when you take them off, they’re three-dimensional, they’ve molded to your body. So I wanted something that didn’t have that costume quality. Something that would get better and better. 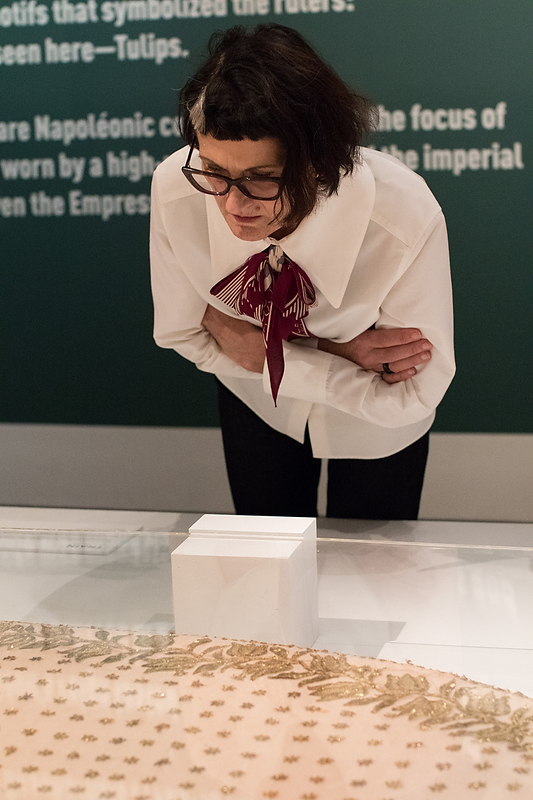 What did the rest of the crew – director, producer, etc. – think of the denim direction of the costumes?

Because our time frame was so tight, they liked the idea – but I was using words to describe visuals, and I didn’t know whether they really understood what I meant. There is a time lag of making toiles and prototypes that are sufficiently advanced enough that you can show, because there is so much to learn. There’s no point in showing something that’s only halfway there in your mind – they are not going to understand where you want to take it. So it’s about how you communicate that information. We pushed ahead and did some fitting toiles just for the generic crowd because their costumes go to the factories the soonest. I didn’t draw anything because it was so organic to develop it. I helped myself by using my middle son as my fitting model, who is very good looking with long hair – and I think he sold it well!

It was [production company] Working Title, and I’ve done two Elizabeth films with them. [Co-chairman] Tim Bevan had confidence in me. And I think that helped. If I’d been going into an entirely new company I think it would have been a harder battle.

This story is so different, it needed to be done in a different way. I didn’t want to redo Golden Age. I’ve done that. This is the reality – we’re going to be shooting in Scotland in rain and mud and hail. If we rent costumes, you’re going to pay ten times over in loss and damage for something that doesn’t look great in the first place. If you look at the fabrics that we used on Golden Age, the fabric alone would be 3,000 dollars for a dress. We couldn’t do that, we had to do it another way.

The budget is always a bit of a slugout. Sometimes I think you just have to stand your ground. At that point I was so excited about the idea and I didn’t know how else we could do it. How can you do armies that are going to be falling in the river, covered in mud – how do you put boots on that many people if you’re not stylizing to make them? There aren’t enough period boots to even fit!

So you had shoe makers as well?

We made everything. All of the extras, everything – 16 weeks out from shooting. A lot of it was made in a factory in Poland and a factory in Leicester, they did all the denim. And they did such a good job. The factory in Poland makes military uniforms and I’ve used them before. They’ve never done period and they were very excited to get a new string to their bow. They were formally a denim factory. 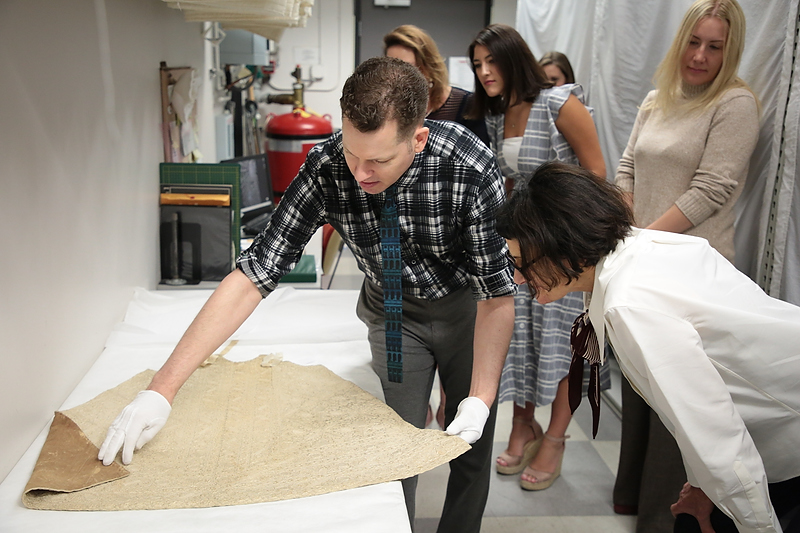 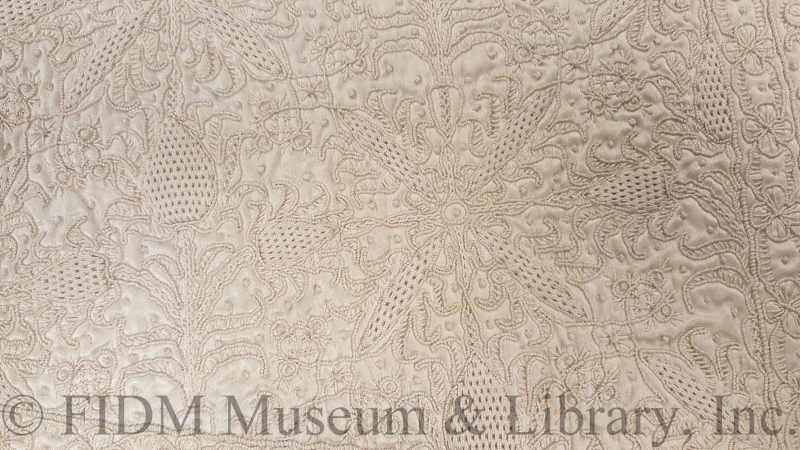 What kind of denim did you use for the film, and how did you achieve such distinct textures and colors?

We used every kind of denim imaginable! We used stretch denim, we used factory surface denim – our budget was seriously tight. We dyed the fabric; I think by limiting the palette, when you then use color its very strong. For Elizabeth’s clothes, we found a silk cotton blend we could dye one color. So we dyed and printed it. We embellished the denim with embroidery, topstitch, pintucks – everything.

Did you recreate any of the famous portraits of the queens in denim?

When I’m recreating a painting then I step out of the denim. Those are very specific moments that are used for a time lapse. We need to skip forward twenty-five years – Elizabeth walks around three sides of her cloister; she goes from when she meets Mary in an orange denim riding outfit which is referenced in the Darnley portrait, exactly the year that they met. Then we go from that into the Darnley portrait, and around the corner into the Sieve portrait.