Betsy Bloomingdale and the Battle of Versailles

Betsy Bloomingdale and the Battle of Versailles

In the mid-20th century, the splendor of the Palace of Versailles, former home to France’s kings, queens, and emperors, had drastically faded. The palace was in extreme disrepair, facing millions of dollars worth of renovations to restore it to its former glory. Cut to 1973: Versailles Chief Curator Gerald Van der Kemp and his wife Florence happened to be on holiday with fashion publicist Eleanor Lambert, a consummate advocate for American design. The three hatched an idea for a benefit to raise funds for the restoration: an elaborate fashion show in the palace’s Royal Opera theater featuring both American and French designers. In addition to its philanthropic purpose, Lambert recognized the potential advantage of going head to head with the French on an international stage. Seventh Avenue fashion was not considered equal to Avenue Montaigne, and Lambert saw an opportunity to demonstrate the value of uniquely American sportswear. Little did the trio know that the benefit would take on legendary status – a fashion show for the ages now referred to as the Battle of Versailles. 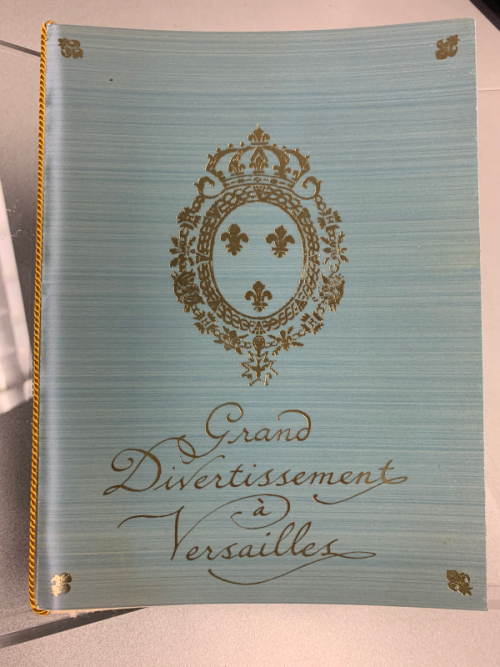 It was decided that each country would showcase five designers. The French selected established couturiers who were the biggest names in fashion: Givenchy, Yves Saint Laurent, Marc Bohan for Christian Dior, Emanual Ungaro, and Pierre Cardin. After Geoffrey Beene and James Galanos declined invitations to participate, the Americans settled on Oscar de la Renta, Anne Klein, Halston, Bill Blass, and Stephen Burrows (a bit of a wildcard, as the young designer was still up-and-coming on the New York fashion scene). The two groupings could not have been more different: the Americans excelled at ready-to-wear fit for a more casual lifestyle, while the French were steeped in tradition and formality. Working with a shoe-string budget, the Americans enlisted veteran performer Kay Thompson to coordinate the presentation. To save on travel costs, the organizers only hired models who could walk for multiple designers; 11 of the models were African American, a surprising showcase of diversity for the time. 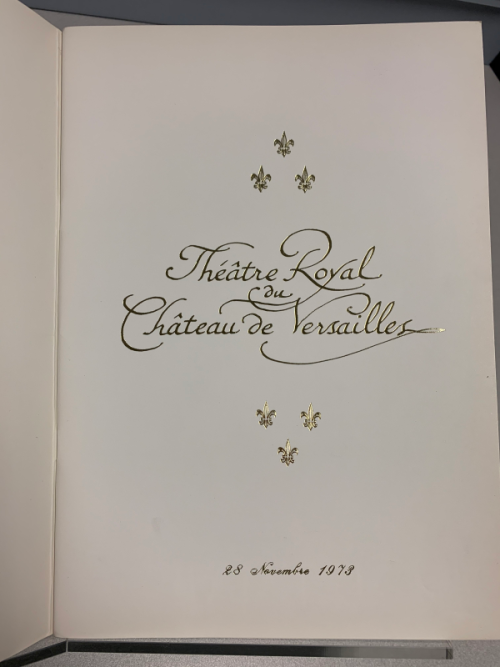 The event saw over 650 invited guests, each paying 1,000 francs per ticket. Everyone from royalty (Princess Grace of Monaco) to Hollywood stars (Elizabeth Taylor) were in attendance. Thanks to zealous media hype – much of it driven by Women’s Wear Daily publisher John Fairchild- and several days of contentious rehearsals between the French and American contingents, the stage was set for an epic fashion showdown. Snow fell outside the palace as guests arrived on November 28, 1973 to the blue and gold theater, lit by candelabras and surrounded by ushers in 18th century livery. The two-and-a-half hour French portion of the evening opened with elaborate sets, wooden props, and orchestra music. Rudolf Nureyev, Josephine Baker, and dancers from the infamous Crazy Horse club were among the performers; yet despite the over-the-top grandeur, it was clear the French delegation had missed the mark. A stiff conventionality and lack of cohesion plagued the production, which seemed to hearken from another time. 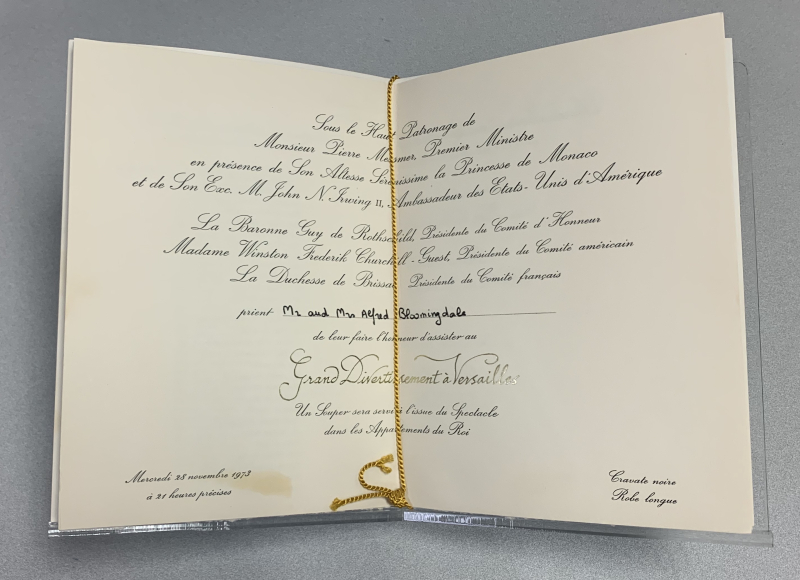 Megawatt star Liza Minnelli opened the American presentation with a rousing rendition of ‘Bonjour Paris,’ waking the audience up after the lengthy first act. A mix-up with measurements caused the American set designer to build a backdrop too small to use; as a result, the models walked on a bare stage, accompanied only by lighting and music. The mishap only served to highlight the differences between the two factions: the minimalist show felt fresh in contrast to the excessive French display. Stephen Burrows in particular brought the house down, electrifying the crowd with fierce models flowing across the stage in his signature lettuce-hem dresses. After just thirty-five minutes, the Americans had finished – and were met with a frenzied audience stomping their approval and tossing programs into the air. Much to everyone’s surprise, U.S.A. was the clear winner of the evening, but they earned more than just bragging rights. The Versailles Grand Divertissement disrupted French couture’s dominance over American ready-to-wear, and signaled a new era in fashion culture. 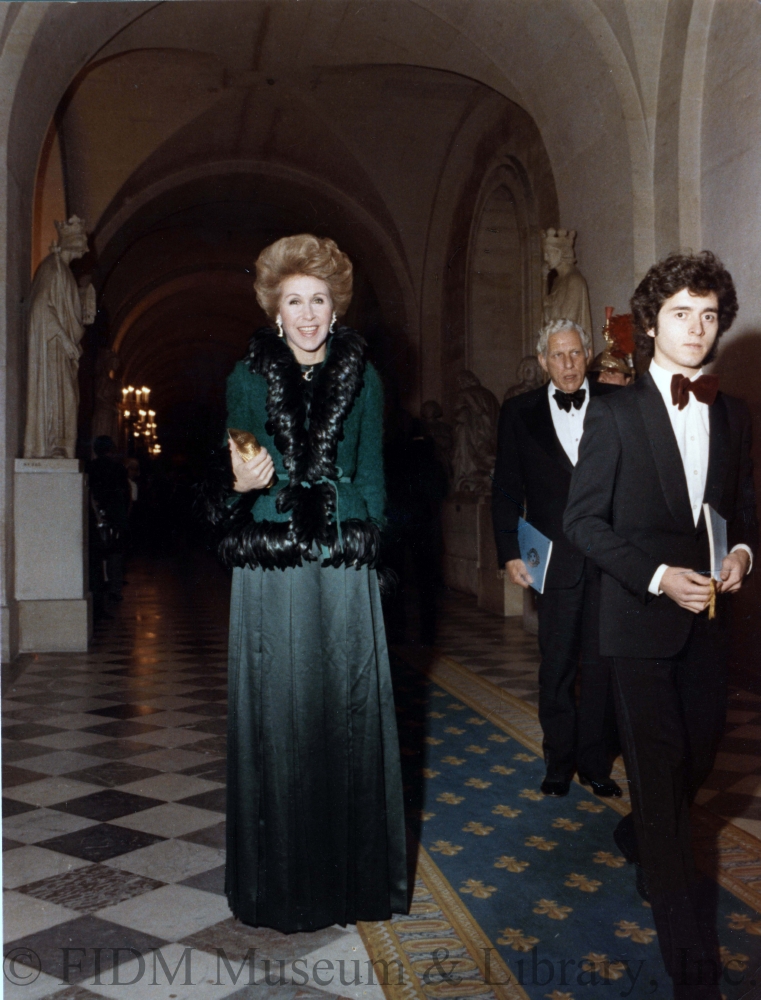 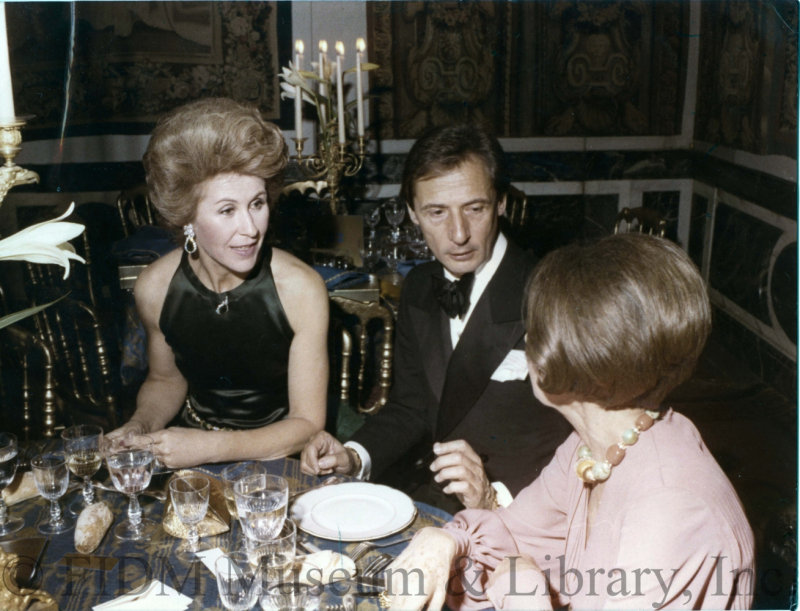 FIDM Museum founding donor Mrs. Alfred Bloomingdale was asked by Mrs. Winston Churchill Guest (C.Z. Guest) to be a member of the American host committee for the event. Betsy Bloomingdale became familiar with the world of French fashion through her husband, a principal partner in Diner’s Club credit cards. As the majority of his business was solidified with the house of Dior, Betsy became a dedicated client of Marc Bohan, the designer she chose to wear to the Versailles festivities. Though it may seem odd to choose a French designer rather than representing one of the Americans, Betsy had a close relationship with Bohan and deeply admired his aesthetic: “Everything that Marc did was so…for me. It fit beautifully, it was pretty. To work with Marc was really very special. I was very fond of him.”[1] She was not the only American dressed for the home team; Mrs. Oscar Wyatt also wore Marc Bohan, and Mrs. Charles Revson (of Revlon cosmetics) wore Balmain. 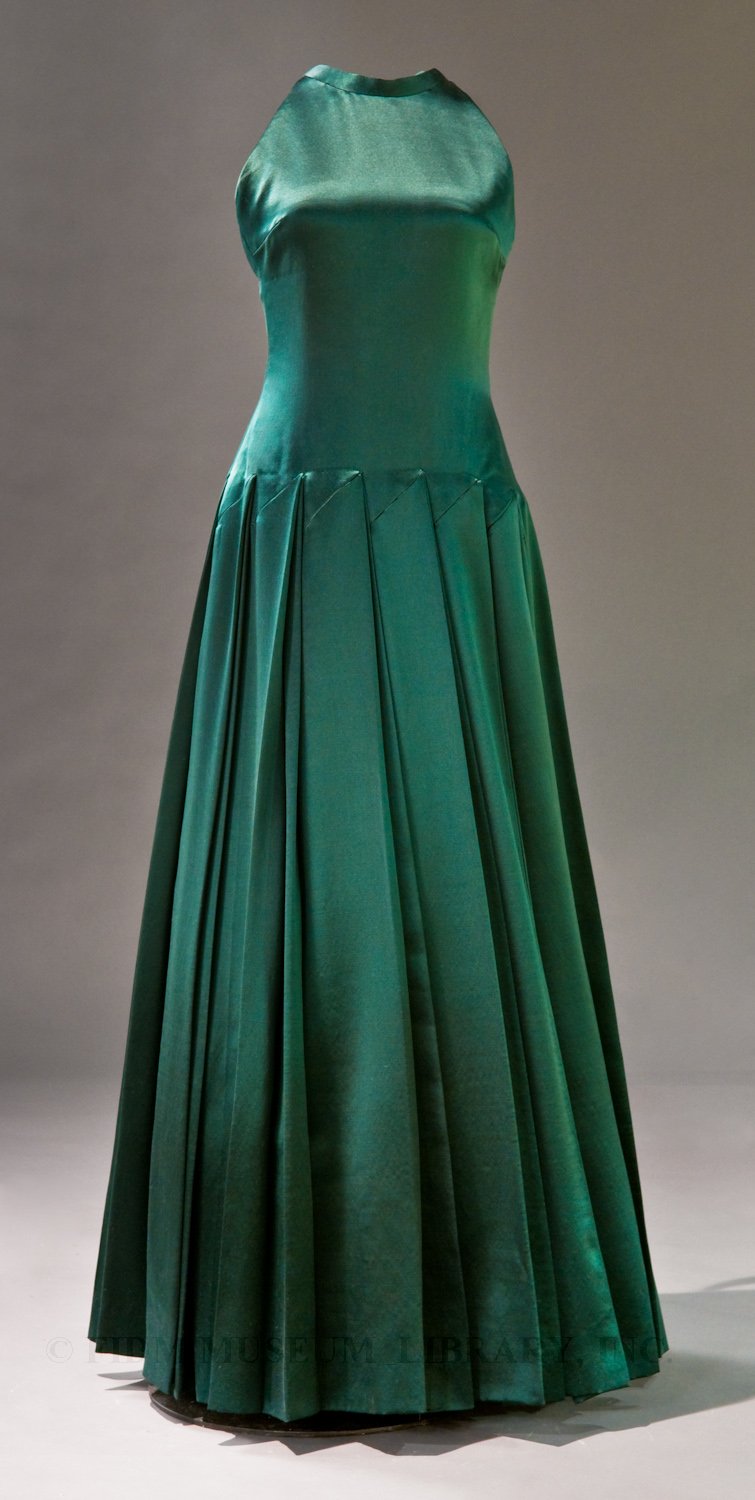 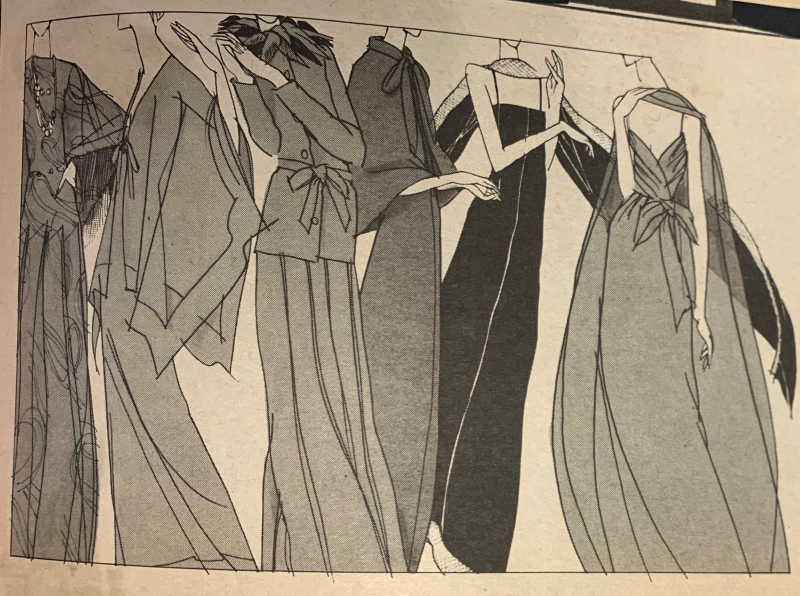 Journalists breathlessly speculated on what each socialite would wear to the grand affair. Before leaving for Paris, it was reported that “Mrs. Alfred Bloomingdale, that plate of fashion, will wear a dark green satin bare-topped dress by Dior. With any luck it will blend right in with her emeralds.”[2] The gown’s clean lines were complemented by a matching green mohair jacket trimmed with coq feathers. Croquis from Bohan’s Automne/Hiver 1973-74 collection, also donated by Betsy, show that the designer incorporated similar horizontal knife pleats and feather-trimmed outerwear into several ensembles that season. 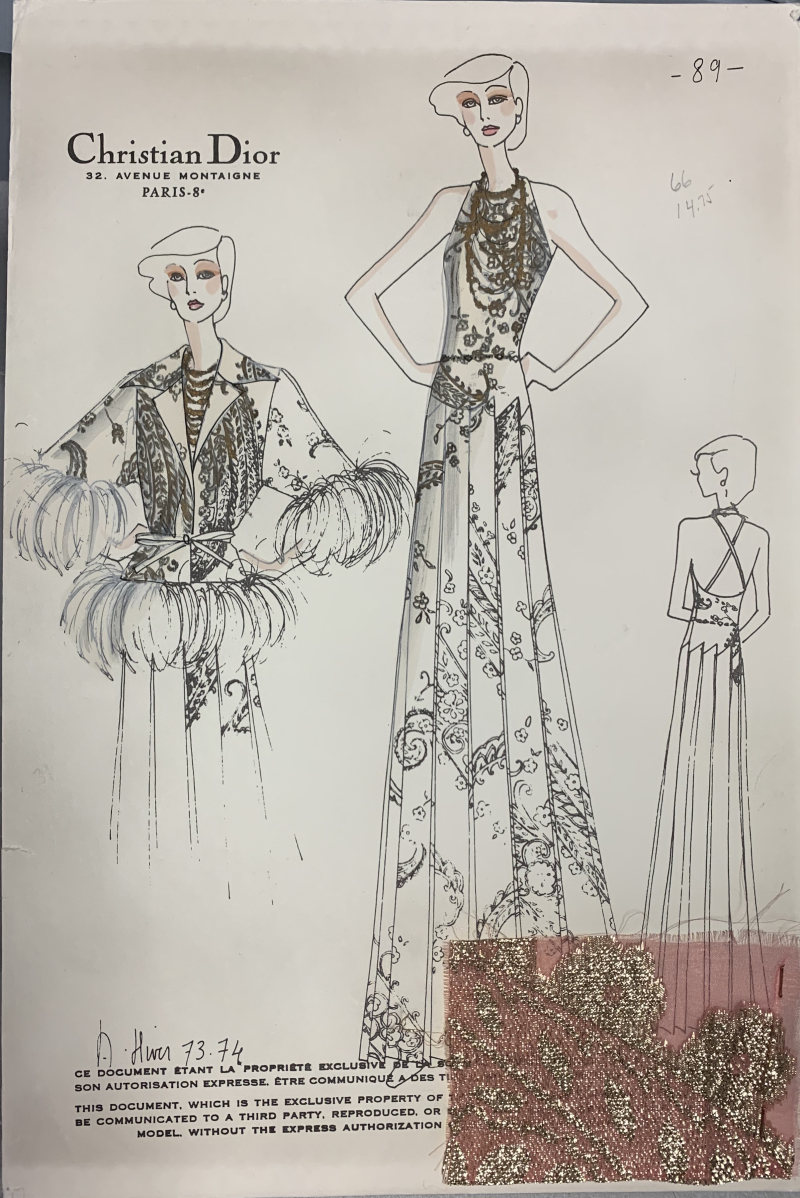 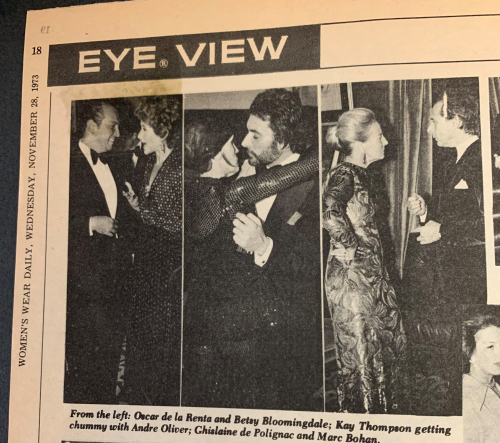 Mr. and Mrs. Bloomingdale flew to Paris to attend the myriad of social events taking place before and after the benefit – each requiring its own designer gown, of course. The festivities began with a party at the iconic Parisian restaurant Maxim’s, where Betsy was snapped conferring with Oscar de la Renta, and ended with an intimate private gathering at the Baron Alexis de Rede’s apartments. To the latter, Betsy chose “Adolfo’s one-shouldered black pailette toga,”[3] now in the FIDM Museum Collection alongside the green Bohan gown. 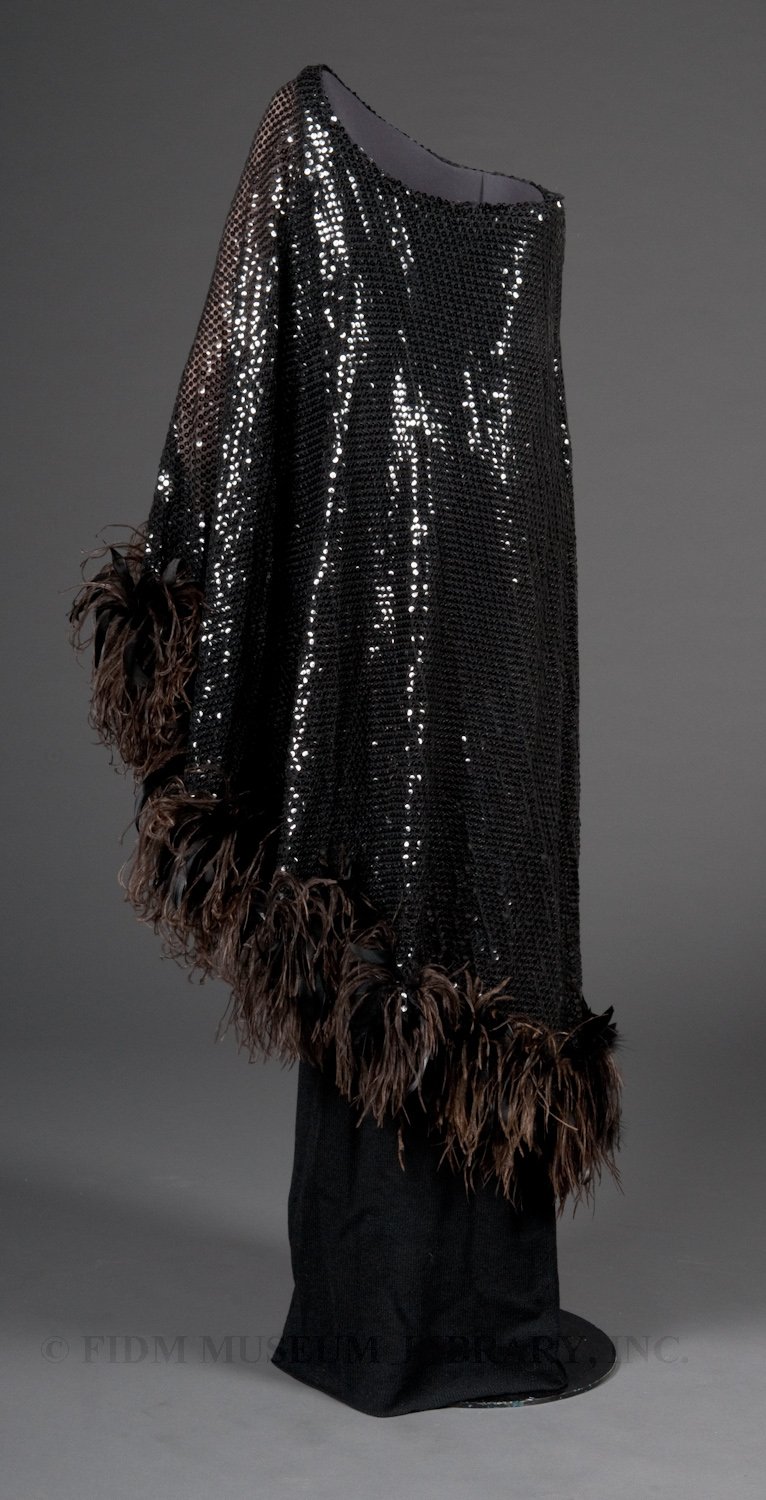 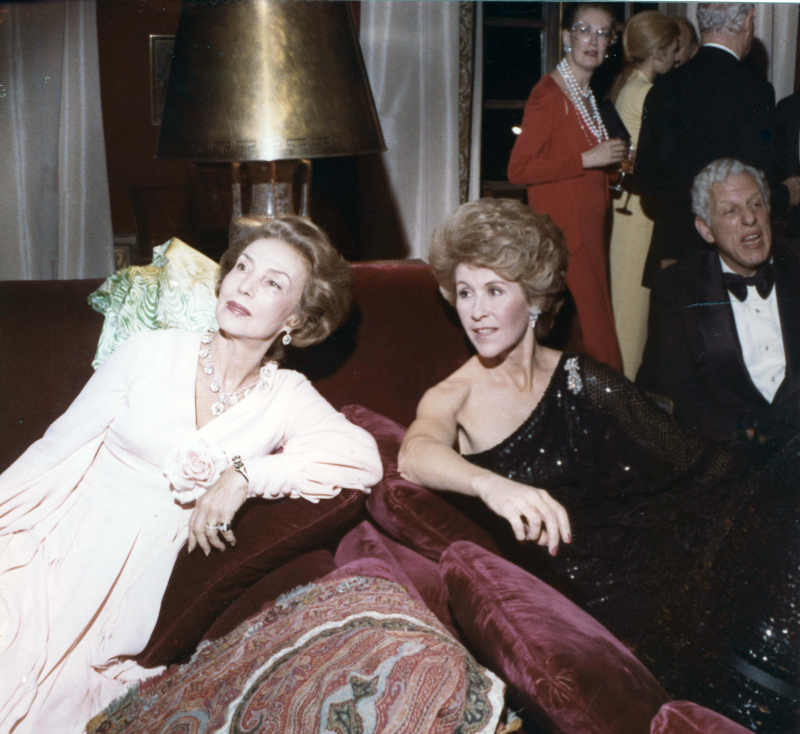 After her death in 2016, Mrs. Bloomingdale’s family donated her paper archives to the FIDM Museum – in it, a treasure trove of ephemera connects the garments in the Museum’s collection to the whirlwind of social events she attended over several decades. Betsy’s meticulously-kept scrapbooks contain clippings from her appearances in various publications, including her storied trip to Versailles. From write-ups in Women’s Wear Daily and The Los Angeles Times, to the elegant blue and gold programs and hand-addressed invitation, Betsy’s documentation of Le Grand Diverteissment contributes to our understanding of that historic evening. 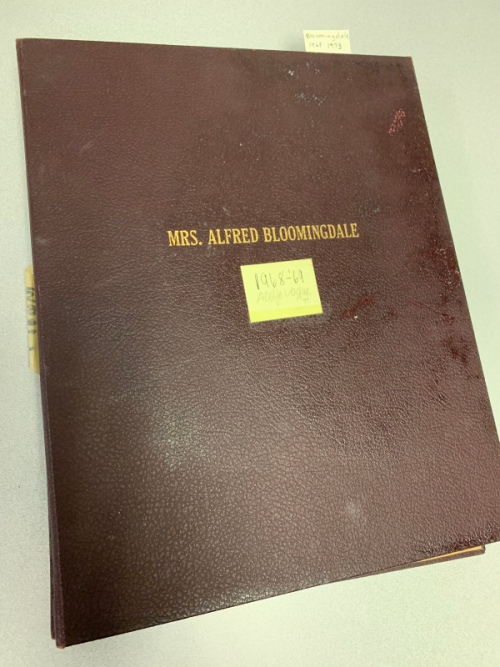 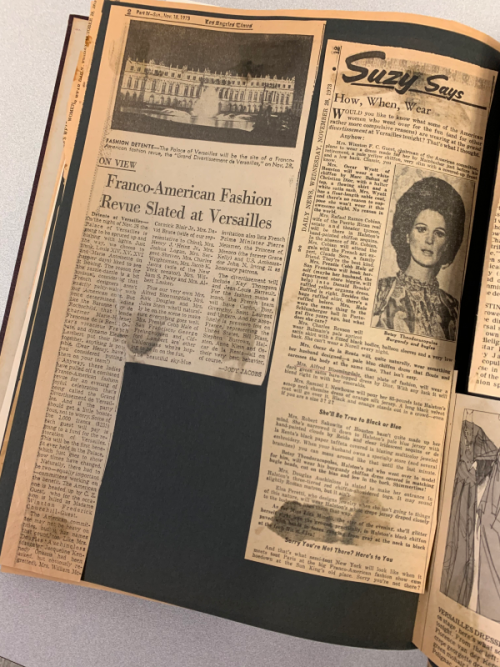 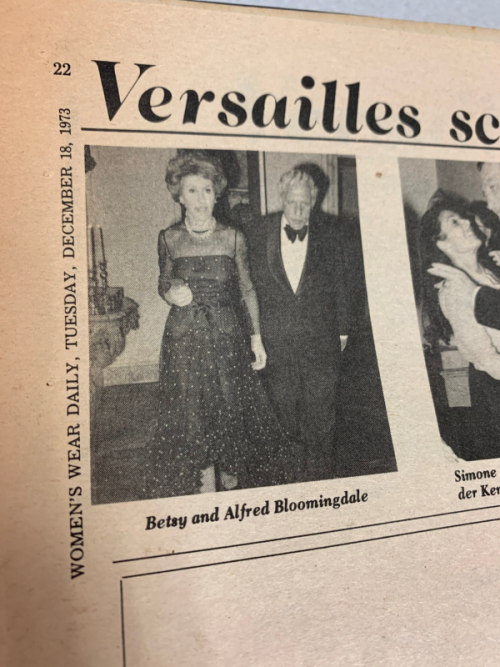