Today’s post is an in-depth look at a very special new acquisition, written by French scholar Georgina Letourmy-Bordier. Letourmy-Bordier holds a PhD in French History of Art, specializing in Fans. She has organized several exhibitions dedicated to this object, and regularly has articles relating to fan research published. She is currently a fan specialist for several French auction houses, mostly in Paris.

Translated from French by Mary Kitson, Secretary of the Fan Circle International

The ‘Amphitrite’ Fan: A Masterpiece in the FIDM Museum Collection

Most antique fans still in existence today have lost their history. Their origins, their context, and the various stages of their making escape us. There is one principle reason for this. Since their introduction into Europe in the 16th century, fans have generally been made anonymously – there are only rare exceptions to this.  There are no signatures on the leaves or on the montures.  It wasn’t until the second half of the 19th century that painters began to sign their work. When the sticks are signed, which is very rare, it is a sign that the work is of exceptional quality. 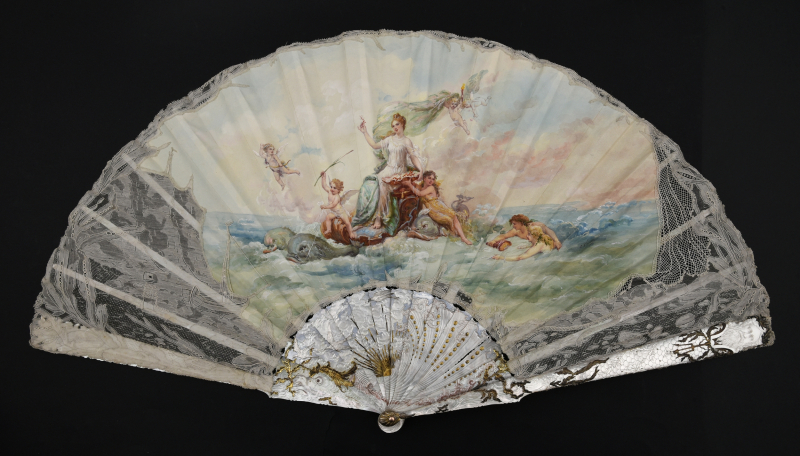 This lack of knowledge is regrettable when the objects are of high quality, like the fan generously given to the FIDM Museum by Mona Lee Nesseth. However, and very fortunately, ‘Amphitrite’ has three signatures: of the painter, Gustave Lasellaz; of the sculptor, Jules Vaillant; and of the fan maker, Adrien Rodien. 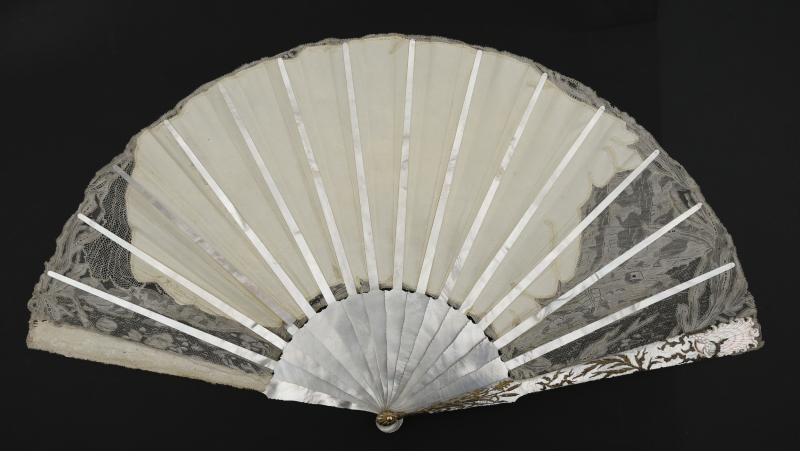 Very probably conceived in the final years of the 19th century, this fan is notable for its size and for the extraordinary wealth of its decoration, a testament to the incredible knowledge of the Parisian fan makers (éventaillistes).

The Artists of This Masterpiece 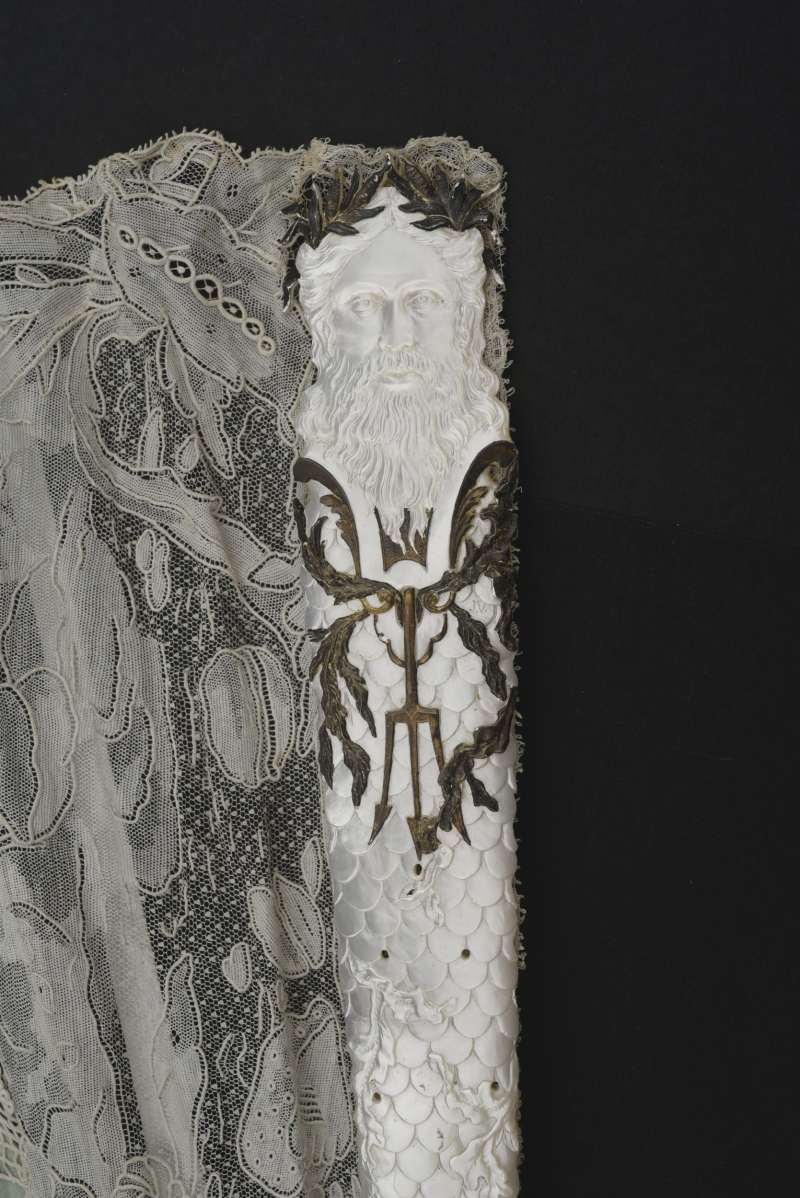 Without a doubt, the most uncommon signature found on a fan is that of the sculptor (tabletier). As artisans, the tabletier’s anonymity is explained by the division of work.  From raw material to carved sticks, the tasks passed through the hands of the cutter, designer, polisher, carver, engraver and finally the sculptor. And depending on the finish required, perhaps a varnisher, embroiderer, or jeweler might also play a part.  In all, about eight craftsmen were involved in the making of a monture (guards and sticks). Confirmation that a work is carved by a particular individual with a signature on the sticks is exceptional. The montures of fans can be made of wood, bone, horn, ivory, tortoiseshell or, as seen here, from a similar number of white mother-of-pearl shells, with the same whiteness and reflective qualities.

In the second half of the 19th century, the desire of a number of fan makers to revive the excellence of fan making workshops (ateliers) led to them promoting various talented artists to exhibit at international exhibitions.  Recognition for the sculptors occurred in parallel with the painters.  Jules Vaillant (1835-1904) was one of the former.  Although it is difficult to determine precisely his route to the workshops in the Oise Valley region of Méru, it is certain that his career started in Andeville, the home of the greatest carvers and tabletiers of mother-of-pearl fans. During the 1855 Exposition Universelle in Paris, members of the jury judged his work severely, stating that he must learn to design. So, Jules Vaillant persevered.  Quickly, the quality of his designs improved and he began to sign his work by engraving his initials in the mother-of-pearl, his chosen material.  On the fan in the FIDM Museum, there is a very discreet ‘JV’ carved on the guard stick, below the head of Poseidon. His full signature ‘Jules Vaillant’ is also carved on the guard stick above the head of the fan, unobtrusively engraved into the leaf of a reed. 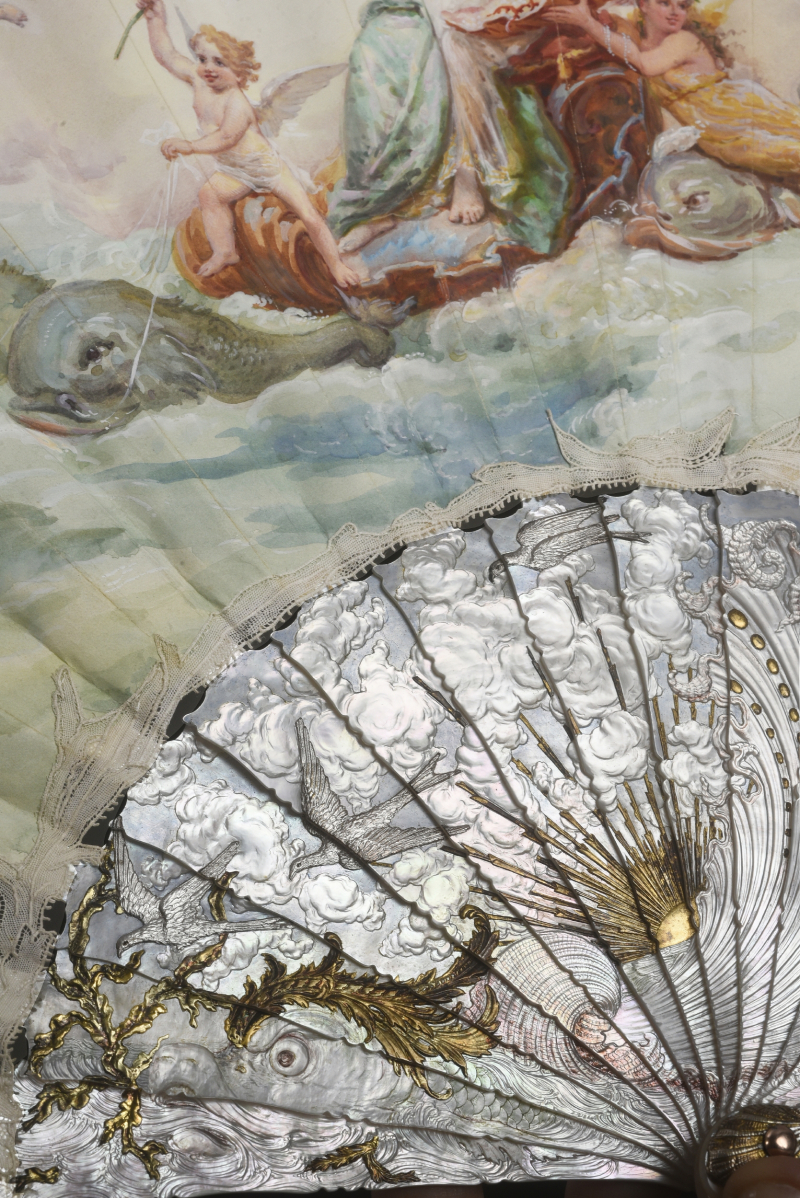 Jules Vaillant was commissioned by the celebrated fan maker Adrien Rodien to make this monture. They collaborated on a number of occasions.  For the marriage of Princess Amélie of Orléans (1865-1951) in May 1886, Adrien Jean Rodien commissioned an ivory monture for a richly decorated fan, today in the British Royal Collection (Inv. RCIN 25213 (Q 3). The sticks are an exceptional work of sculpture in relief, featuring cherubs and shells.  While the guard stick is embellished with the bride’s monogram in diamonds and rubies surmounted with a crown, the centre of the gorge is decorated with the coats of arms of the royal families of France and Portugal, united through this marriage.  The leaf is signed by the celebrated painter, close to the Orléans family, Eugène Louis Lami (1800-1890). 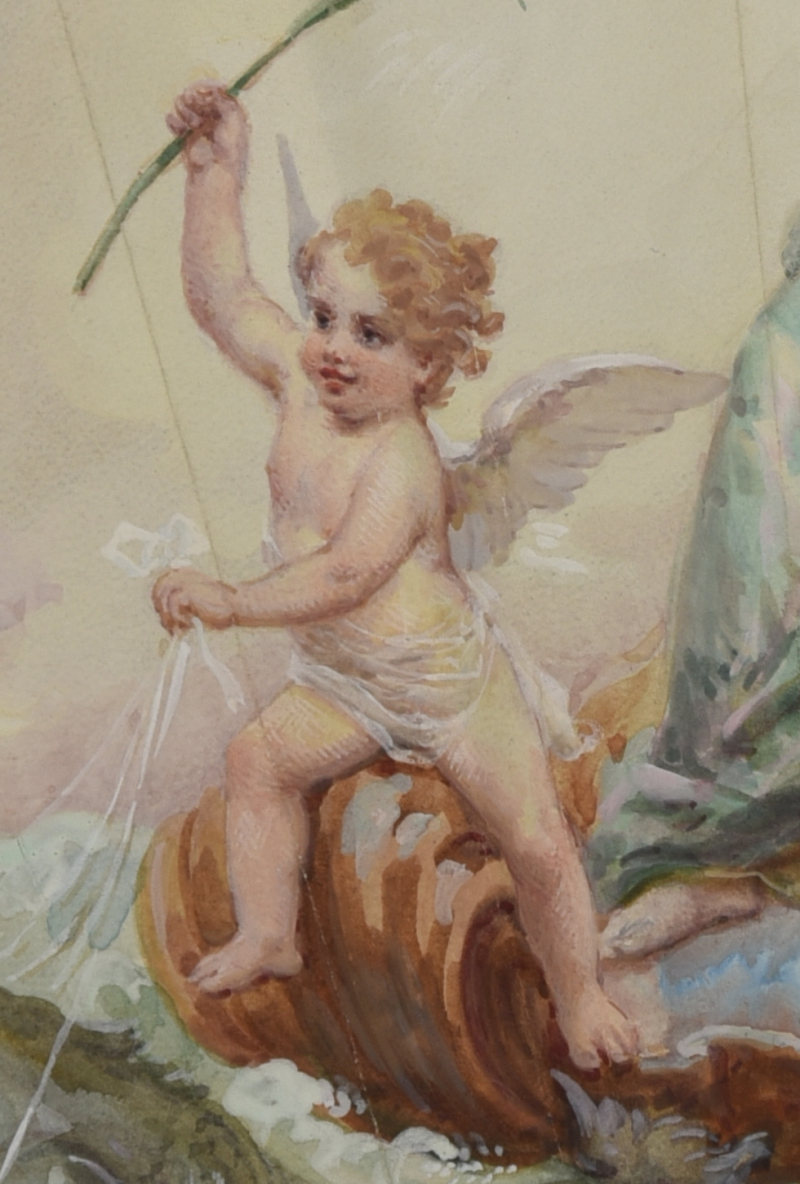 For the leaf of ‘Amphitrite’, Rodien looked to Gustave François Lasellaz (1841-1918).  Well-known as a fan painter in the second half of the 19th century, Lasellaz was, in a sense, a member of the elite of fan artists.  With others such as Jules Donzel, Marie Dumas, and Gabrielle Zaborowska, he was often commissioned to paint fan leaves destined as fans for prestigious clients. Son of a Parisian jeweler, Lasellaz was taught by Justin Marie Lequien (1796-1881), whose school of design and sculpture in rue Ménilmontant turned out ‘worker-artists’. Lasellaz started his career painting porcelain and progressed to achieve the status of an ‘artist painter’. He exhibited at the French Salon des Artistes but also executed many fan leaves for the great Parisian fan makers. 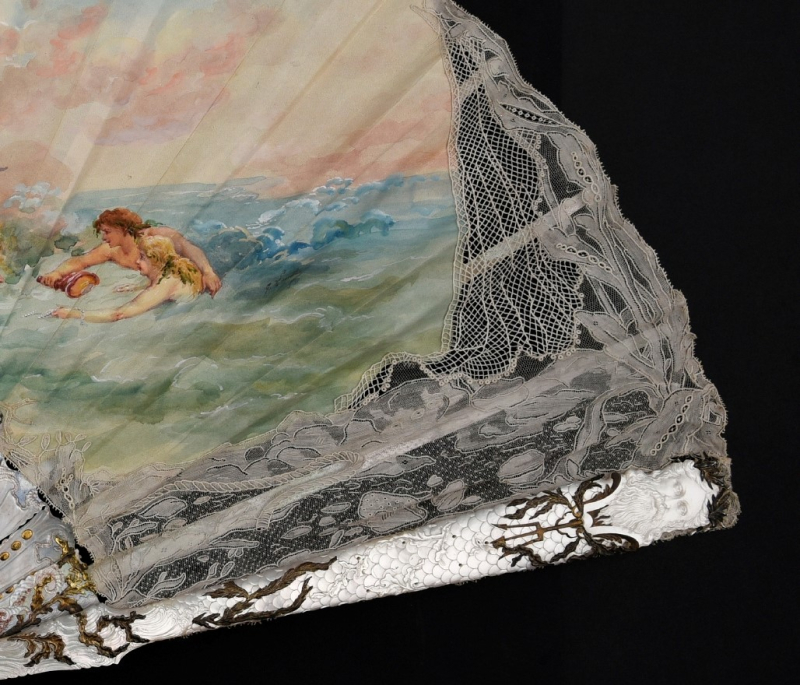 For this fan, the vellum leaf is surrounded by an outstanding lace border of which the maker is unknown. The nets and boats seem to ‘bite into’ the painted composition and the marine theme is also found in the gorge where a dolphin plays in a wave that envelops the sun. Without a doubt this was a commissioned piece, remarkable for its quality and originality, from the fan maker Adrien Rodien about whom, today, only very little is known.

On 23rd December 1893, the following notice appeared in the newspaper Le Figaro: ‘Among Parisian fan makers, M. Rodien is one of the best, if not the best’.  Purchased by Duvelleroy in 1903, in the second half of the 19th century the House of Rodien had enjoyed huge renown, so it is not surprising to find the signature ‘Adrien Rodien, Paris’ at the left on the reverse of this fan.

For nearly half a century, members of all the European courts favoured him with their business. In 1874 the newspaper Le Monde Illustré wrote that the Empress of Russia had bought from his shop some fans with leaves by the admired painters Marie Bonheur (active 1857-1876) and Josephine Calamatta (1817-1893), both of whom had previously worked for the fan maker Félix Alexandre (1822-1887). 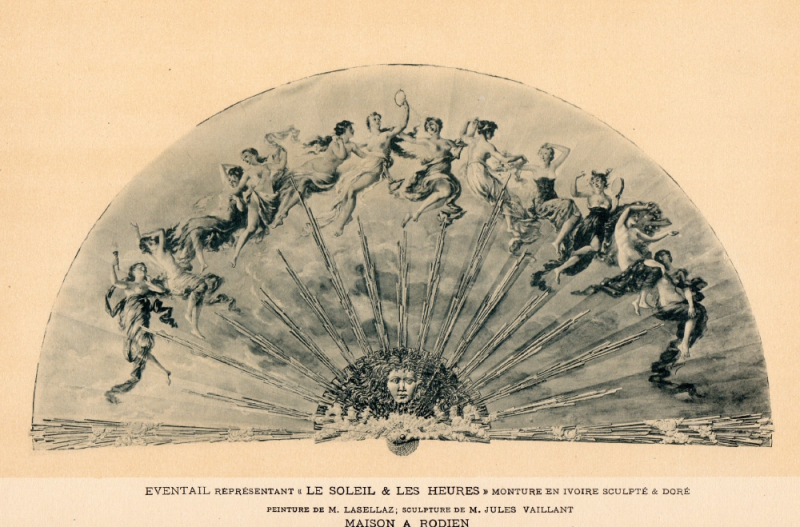 Employing artists like Vaillant and Lasellaz, Rodien provided exceptional fans. In fact, the three worked together on a number of occasions, including for the 1889 Universal Exhibition where they jointly received a Silver Medal for ‘The Sun and the Hours,’ a fan no longer traceable. Then, in the Universal Exhibition of 1900, they were again honoured, this time with a Gold Medal, for ‘Les Océanides,’ a fan today in the collections of Palais Galliera, the Costume Museum of Paris (Inv. 1966.44.14), to whom it was given in 1966 by Mme Georges Salvanhac-Rodien, daughter of Adrien Jean and grand-daughter of Adrien Louis Rodien.

With its rich and refined decoration, the ‘Amphitrite’ fan must be considered an outstanding piece of work.  Made by excellent artists, it bears witness to the expertise of one of the most prestigious fan makers in Paris in the last years of the 19th century.