In 1966, Women’s Wear Daily highlighted the innovative work of a young New York designer fresh on the scene: Scott Barrie (1941 – 1993). Inspired by Madame Grès and the sinuous gowns of the 1930s, Barrie’s fashions were based on his experiments with draping, resulting in a collection of flattering, flowing dresses and pants that heralded the disco styles to come in the 1970s. He stated, “I have never worked in fabrics like matte jersey before, and I am discovering how exciting they can be…I am going to do things which you haven’t seen anywhere before.”[1] 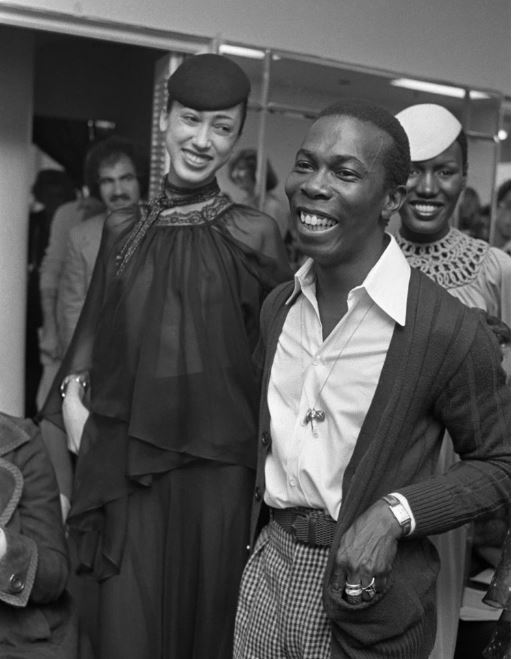 Scott Barrie, a pioneer of Black fashion design, was born Neal Clyde Barr in the small town of Apalachicola, Florida. Barrie’s interest in fashion was encouraged by his West Indian grandmother, a professional dressmaker.[2] He learned to sew by watching her work, telling Ebony magazine in 1980, “I practically grew up under that machine, pedaling the thing for her. Naturally, by instinct you pick up the basics very early on.”[3] His godmother was also a designer, and Barrie observed her making clothes for famous jazz singers such as Della Reese, Sarah Vaughn, and Dinah Washington.[4] 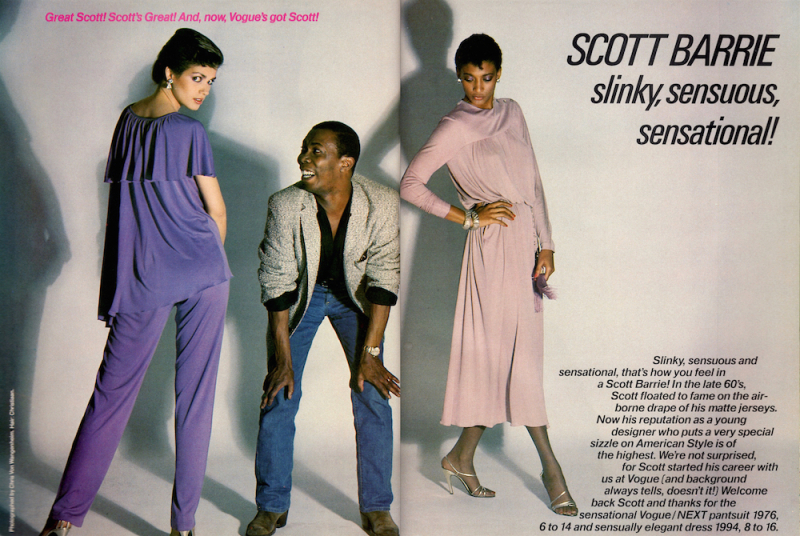 Barrie studied briefly at the Philadelphia Museum College of Art before moving to New York to attend the Mayer School of Fashion. Eager to begin his career, he took on several freelance jobs throughout the 1960s – including an apprenticeship with legendary Black designer Arthur McGee and a sketch artist position at Vogue Patterns. Though he was finding success with contract design work, in his own words, “What I wanted more than anything was to have my own business – my own name on the door.”[5] He achieved this in 1969 when he launched Barrie Sport, Ltd. in partnership with Stephen Marks, husband of commercial model and frequent client Robbie Wolfe.[6] Bloomingdales and Henri Bendel were among the first high-end stores that purchased Barrie Sport garments, allowing him to open his Seventh Avenue showroom in December 1972. Naomi Sims, a celebrated Black model, was a close friend of Barrie’s and often wore his designs for her high-profile press appearances. She helped him drum up business by modeling free of charge, and advised him on which designs to include in his collections.[7] 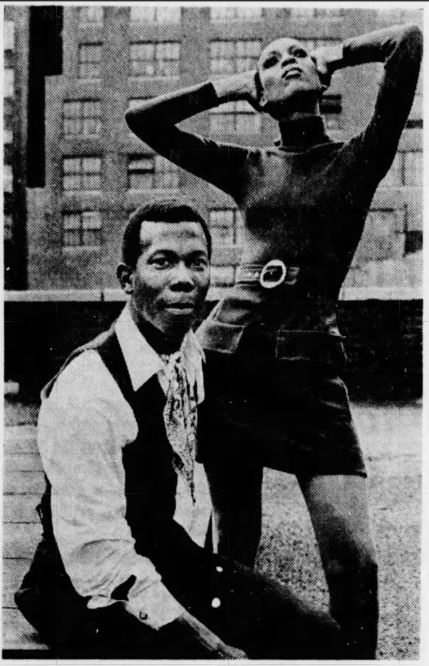 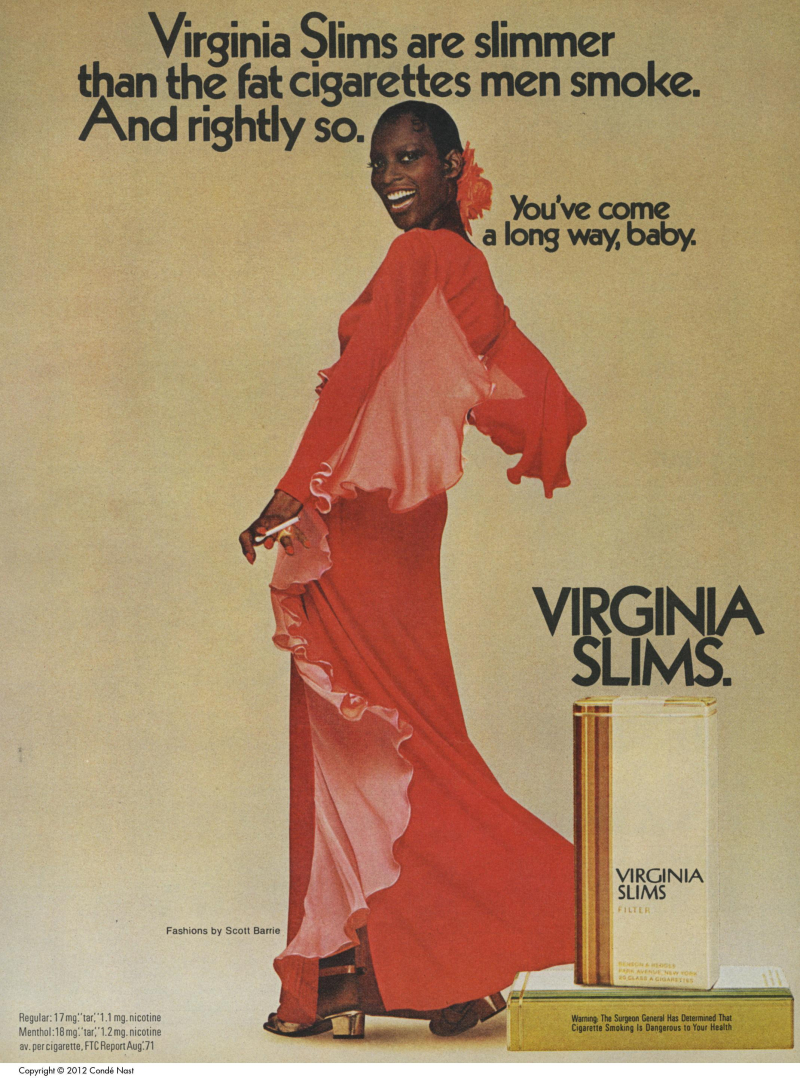 Barrie’s sexy yet comfortable styles appealed to New York’s vibrant disco scene. He saw his young age – he was in his late twenties when he started Barrie Sport – as an advantage, citing that “Youth is flexible, willing to experiment.”[8] He pushed the boundaries with new design concepts, such as fluted fabric bracelets and upper-arm cuffs, or strapless dresses with ties wrapped around the body in unique color combinations.[9] Costume design became another creative pursuit, with projects for film (Ganja & Hess, 1973) and stage. The Joffrey Ballet tapped Barrie to outfit the dancers in Twyla Tharp’s 1973 premiere Deuce Coupe, a modern ballet set to music by the Beach Boys – hence Barrie’s Hawaiian print shirts for the men and bright orange jersey dresses for the women. 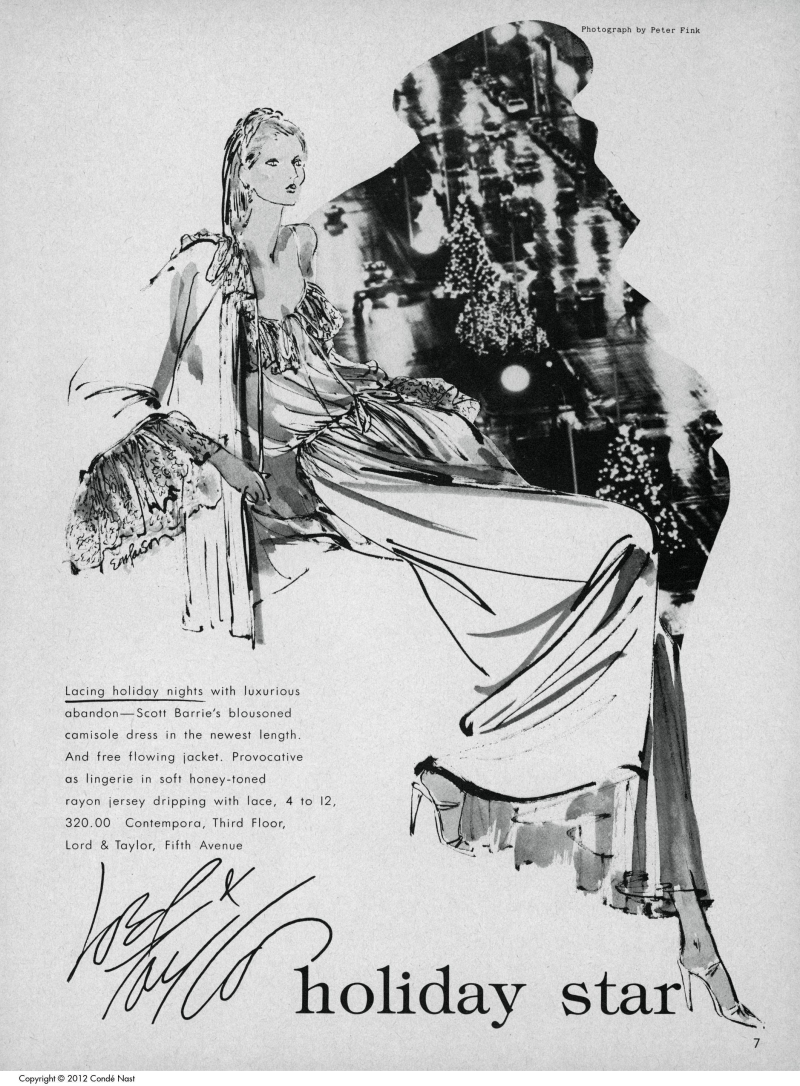 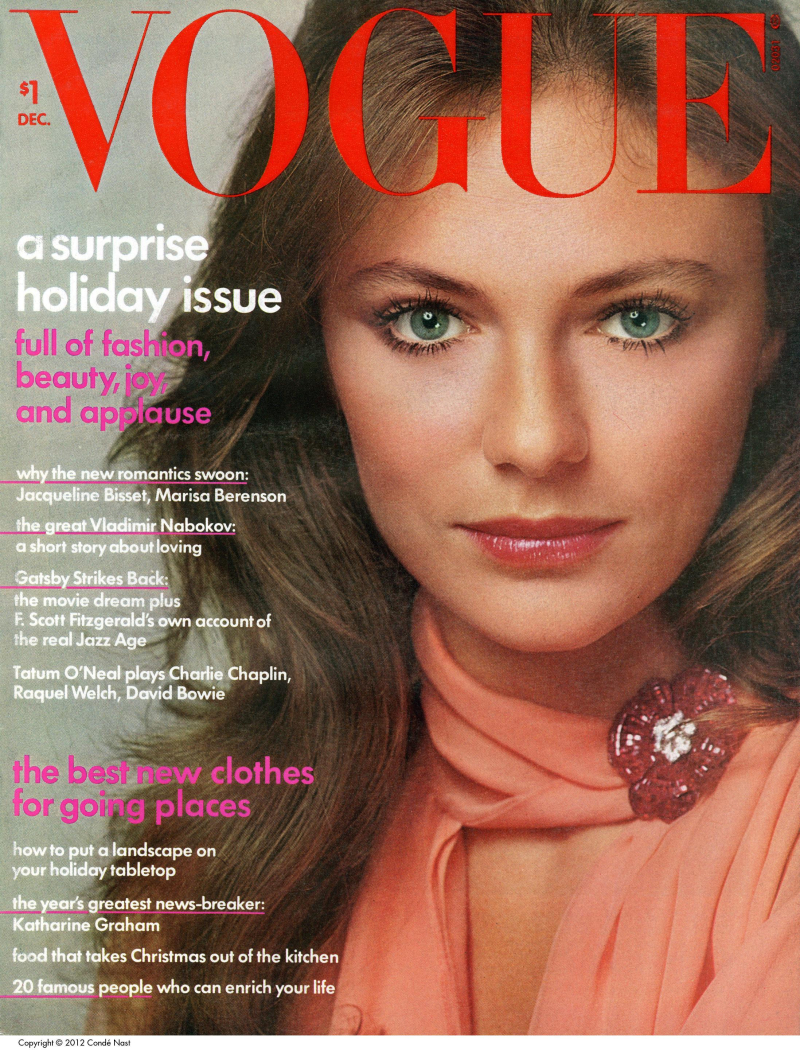 The soft, feminine designs of Barrie Sport corresponded with the emerging New Romantics movement of the 1970s, a response in both fashion and music to the Punk scene’s hard lines and dark moods. Early in his career, Barrie found inspiration in the sensual gowns of the 1930s, as well as Coco Chanel’s dream-like costumes from the 1961 French film Last Year in the Marienbad.[10] Actress Jacqueline Bisset, the “it” girl of the New Romantics, graced the cover of Vogue in 1973 wearing “one of the most romantic new dresses – ankle-length peach chiffon with a camisole top and thin, soft jacket, cut like a bed jacket,”[11] designed by Scott Barrie. His collections frequently featured “gentle colorings – peach, apricot, banana, off-white, and white,”[12] as well loose silhouettes and embellishments like lace and ruffles. 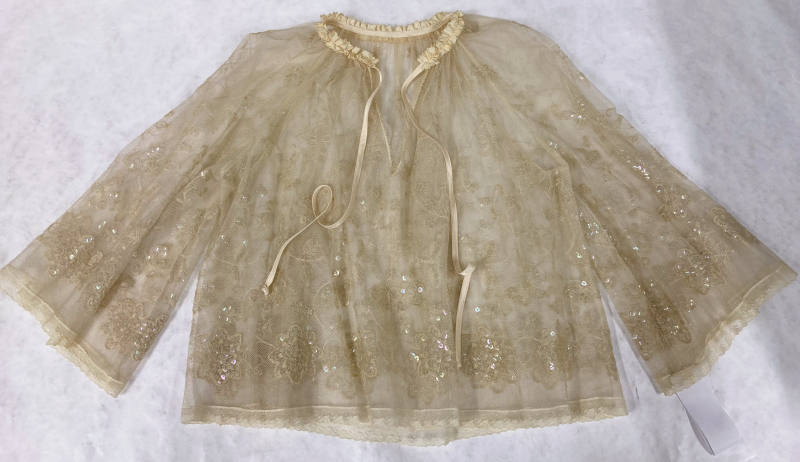 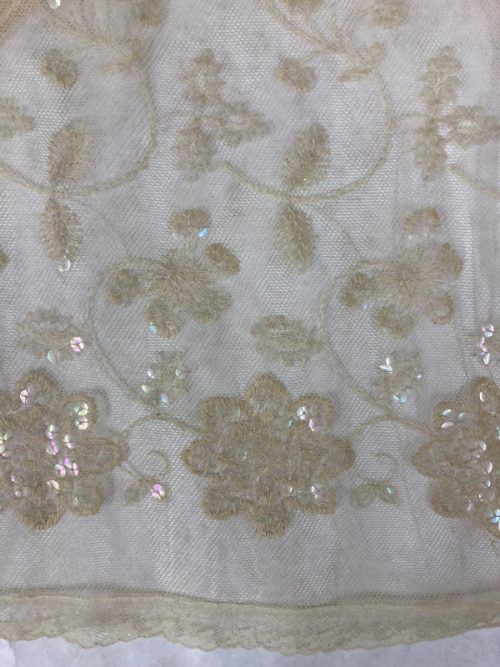 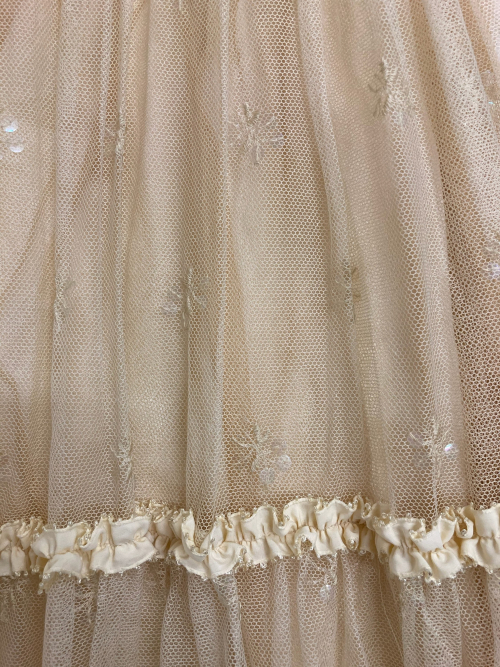 It was this romantic aesthetic that caught Joan Beer’s attention when she passed by a Saks window on Fifth Avenue in 1978. Joan was engaged to be married, but hadn’t yet found her dress – and as a busy professional working in the city, she had no time to make it herself! A traditional white gown was not Joan’s style; she preferred something more unconventional. Then she saw Barrie’s pale peach and ivory three-piece ensemble in the window – charmeuse camisole, embroidered tulle peasant blouse with iridescent sequins, matching layered skirt – and knew she had found her outfit. Joan was aware of Barrie as one of the exciting young designers of the day, and she thought his design was “the perfect combination of fun and fantasy”[13] for her May 7 wedding to Donald Damask. The ensemble was featured next to her husband’s Armani wedding suit in the FIDM Museum’s 2015 exhibition Inspired Eye: The Donald and Joan Damask Design Collection. 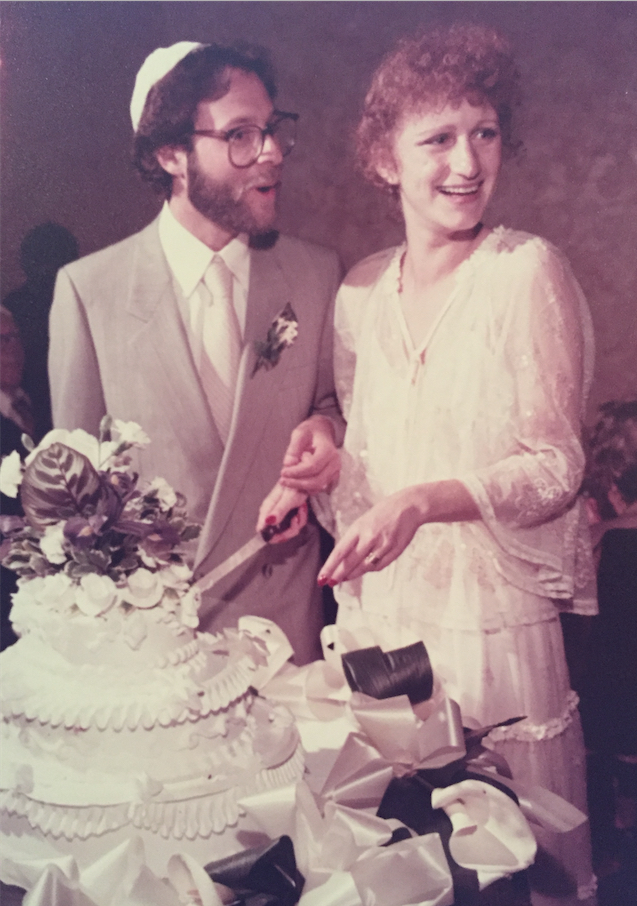 Donald and Joan Damask on their wedding day in Long Island, May 7, 1978 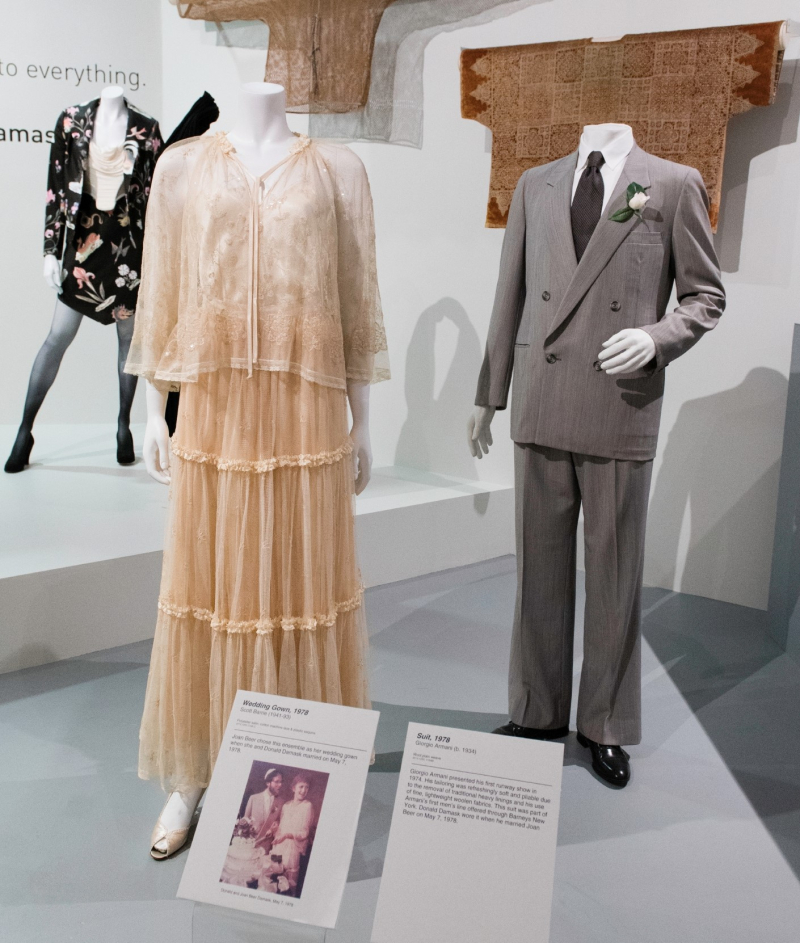 When Stephen Marks and Scott Barrie ended their professional partnership in 1980 under tense circumstances, the designer struggled to regain his footing. It was a problem several Black designers faced: despite undisputed talent, years of profitable collections, and creative contributions to the industry, few Black designers owned the majority stake in their brands, and therefore made significantly less money than their white counterparts.[14] A 1981 article in Black Enterprise observed that after being initially embraced by the fashion world, models and designers of color often experienced relatively short careers, and were routinely shut out from manufacturing and retail profits.[15] All of these financial implications were compounded by encounters with racism in the industry. Barrie described his experience looking for assignments as a freelance designer: “I’d phone. Firms would say ‘come on over,’ and when I did, the job was suddenly gone.”[16] In an interview with journalist André Leon Talley, Barrie recognized that Black designers “always are fighting against the system.”[17] 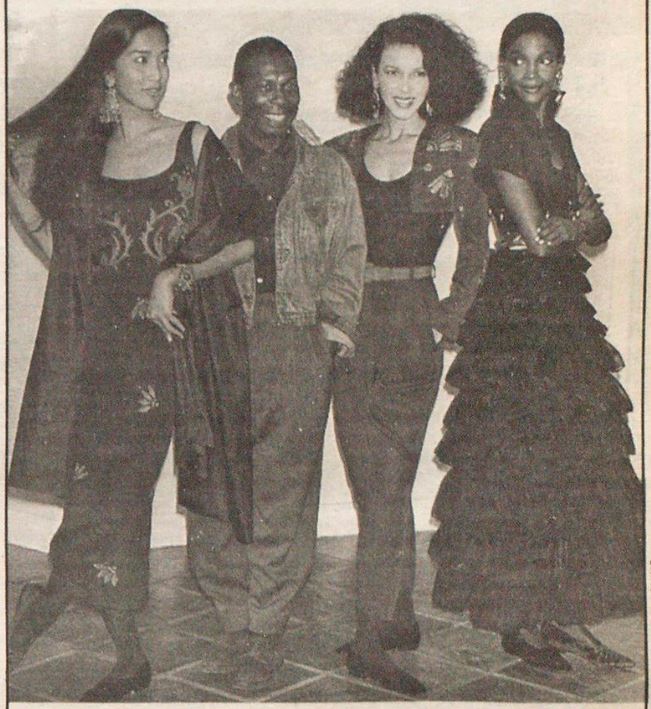 Barrie spent the rest of his life and career in Italy, working with Milan-based fashion house Krizia for five years, followed by the Japanese company Kinshido. Kindshido sold Barrie’s designs in its Milan D’Or boutiques in New York, Japan, and Europe; he entered talks to open a line of stores under his own name, but the plan never came to fruition. In 1993, at just 52 years old, he sadly passed away from brain cancer in Alessandria, a town outside of Milan.[18]

Scott Barrie contributed to the rapidly evolving fashions of the late 20th century while paving the way for other designers of color to find success. In a 1968 interview with Eleanor Lambert, the ever-ambitious designer predicted that “In five years, I’ll have made it big on Seventh Avenue.”[19] He made it in four.

One response to “Scott Barrie”