Today’s featured Study Collection ensemble highlights a type of dress most often associated with the Parisian designer Jeanne Lanvin (1867-1946). Called a robe de style, the upper portion of the dress is slim and close-fitting, while the skirt is full and rather long. The fullness in the skirt is a result of built-in panniers at each hip. These built-in wire structures, shaped like small baskets, extend the line of the dress horizontally, emphasizing the hips. This look hearkens back to the 18th century, when panniers were worn on a regular basis by European and American women. This historic reference was noted by American fashion writers who often referred to the robe de style as a “quaint” or “period style” dress. 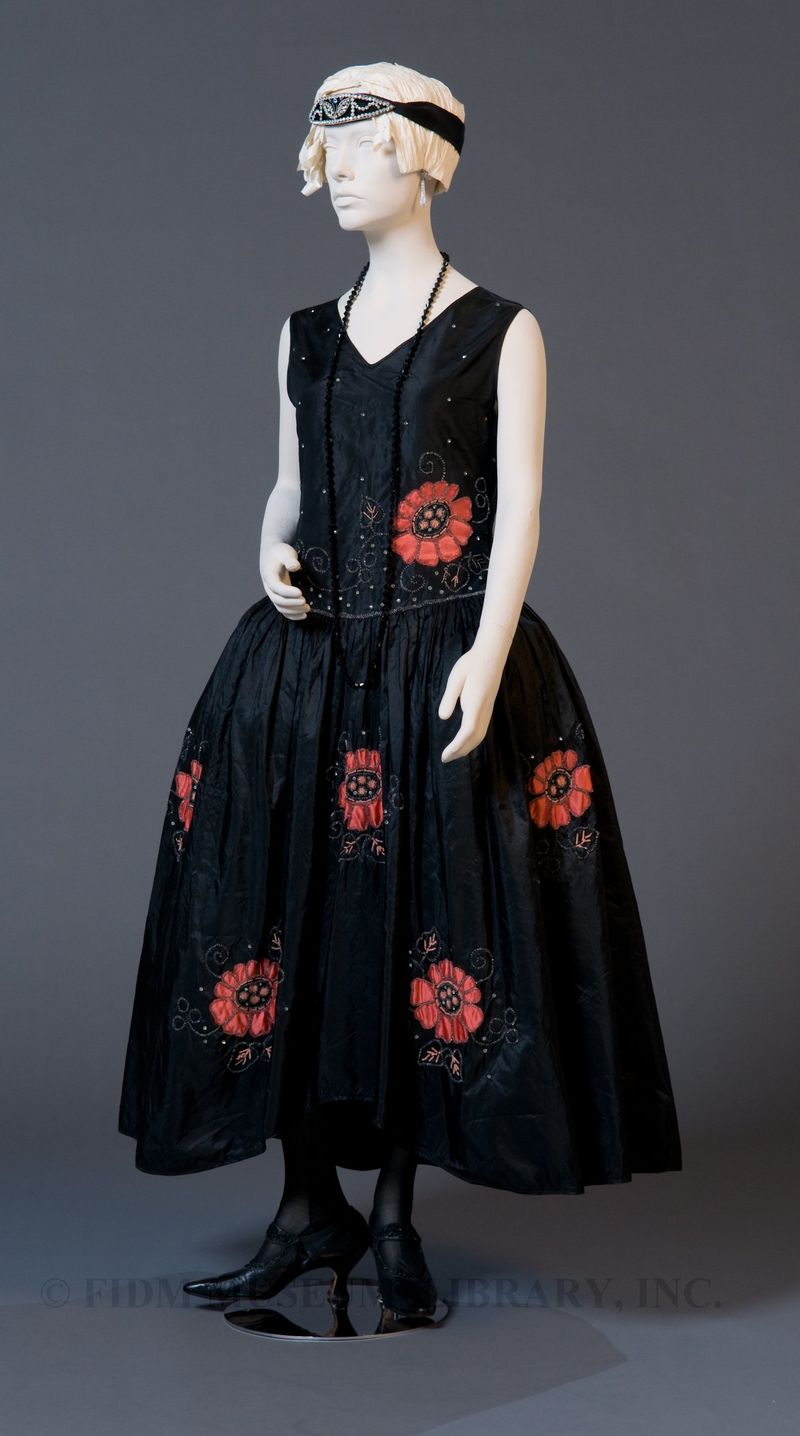 The construction of the robe de style is quite straightforward, as the silhouette does not require careful fitting and shaping of the garment. Visual interest is created by the appliqued flowers of pink silk. The flowers are accentuated by leaves and trailing vines made of clear beads and chenille thread. The bodice is dotted with numerous applied faux crystals. This type of ornamentation is typical of the robe de style, usually of a solid color fabric embellished with beads, ribbon, or embroidery in bold, eye-catching designs. Taffeta was a favorite fabric choice, as its inherent stiffness accentuated the bell-like shape of the skirt. 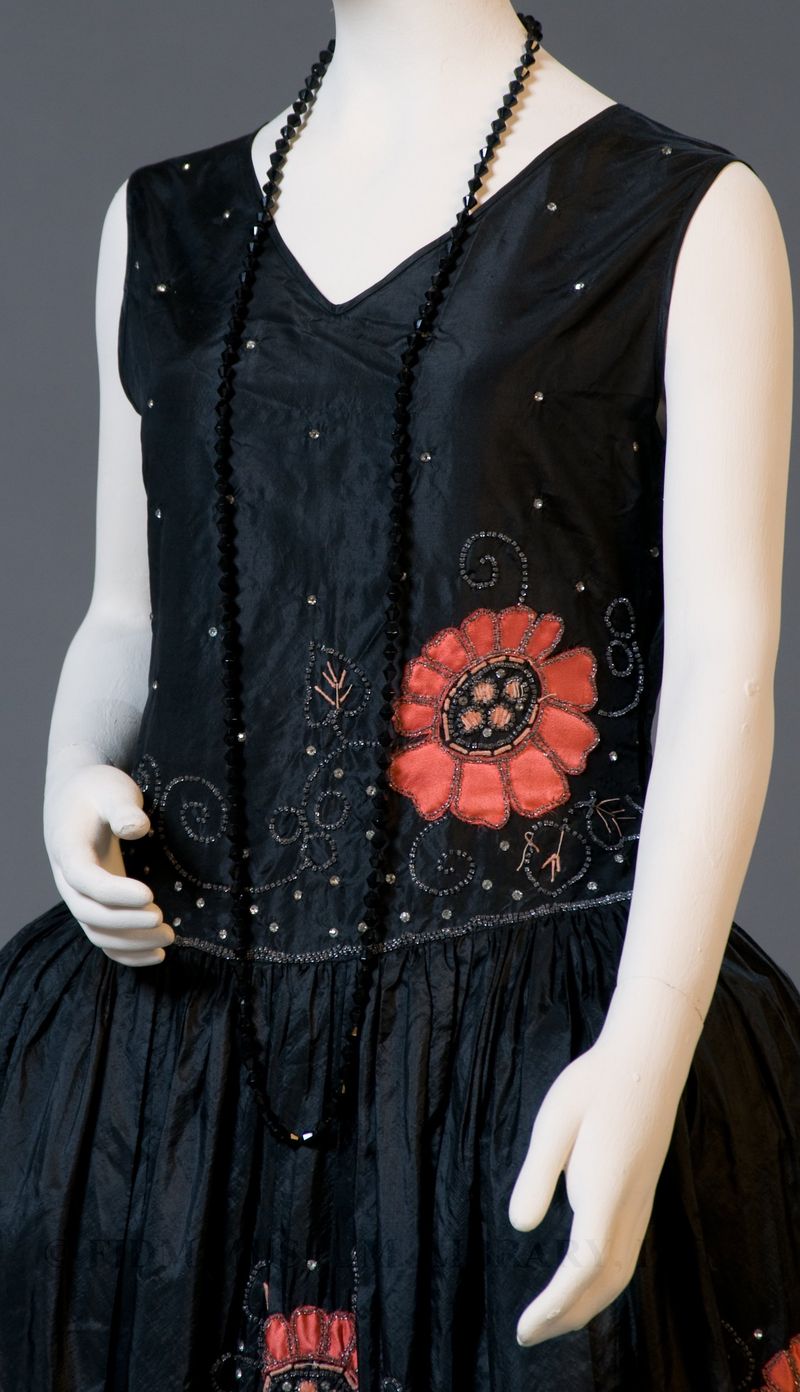 FIDM Museum’s robe de style, though certainly inspired by Lanvin’s designs, does not have a designer label. It was probably created by a woman who spotted a designer robe de style in either a fashion magazine or a department store. Working from these images and perhaps a pattern, she created a fashionable dress very much in tune with those worn by women of greater financial means. Given that this particular dress is black and that the embellishment of the robe de style was thought to “flourish best under the electric lights,” this dress was certainly worn to an evening function.1 Despite this association with nightlife, softly colored pink, cream and peach versions of the robe de style gained popularity as wedding gowns. 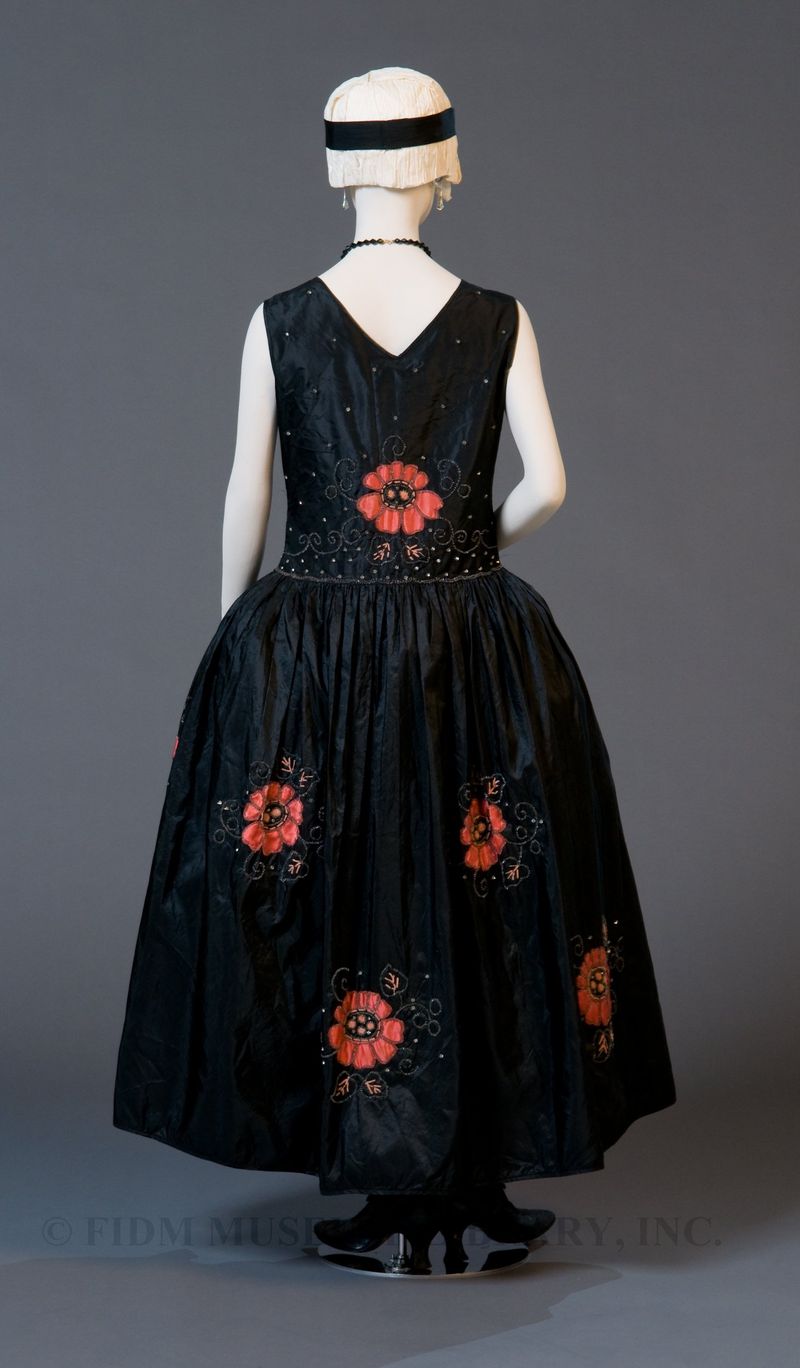 If you looked closely at the date, you may have been surprised to see that this dress is dated to c. 1923. Popular images of 1920s dress focus primarily on the classic “flapper” dress—a very short sleeveless shift dress with fringe or beading. The robe de style was also popular during the twenties, though it was thought to be a classic and somewhat safe choice. It was considered appropriate for women of all ages, from debutante to matron. The flapper shift was more cutting-edge and was marketed towards stylistically younger and more fashion-conscious women. As one fashion commentator wrote in 1925, “The robe de style has a persevering nature. Fashions may come and fashions may go, but it keeps on forever.” 2