Released in 1953, the film Young Bess is a fictionalized biography of Queen Elizabeth I. Focusing on her life before she was crowned queen, the film is set in the late 1540s and stars Jean Simmons as Young Bess. The lavish, historically inspired costumes were created by Walter Plunkett, who had already earned a name for himself with his widely admired Gone With the Wind (1939) costumes. Plunkett began his career in film with a semi-successful attempt at becoming an actor in the early 1920s. He made the shift to costume designer in 1926 when he accepted a position as a wardrobe assistant at RKO Studios, eventually moving to MGM in the 1930s. Plunkett had no obvious background in costume design, apparently teaching himself the necessary skills on the job. This lack of formal training was clearly not indicative of his talents, as he quickly gained a reputation for creating historically evocative costumes for period films. 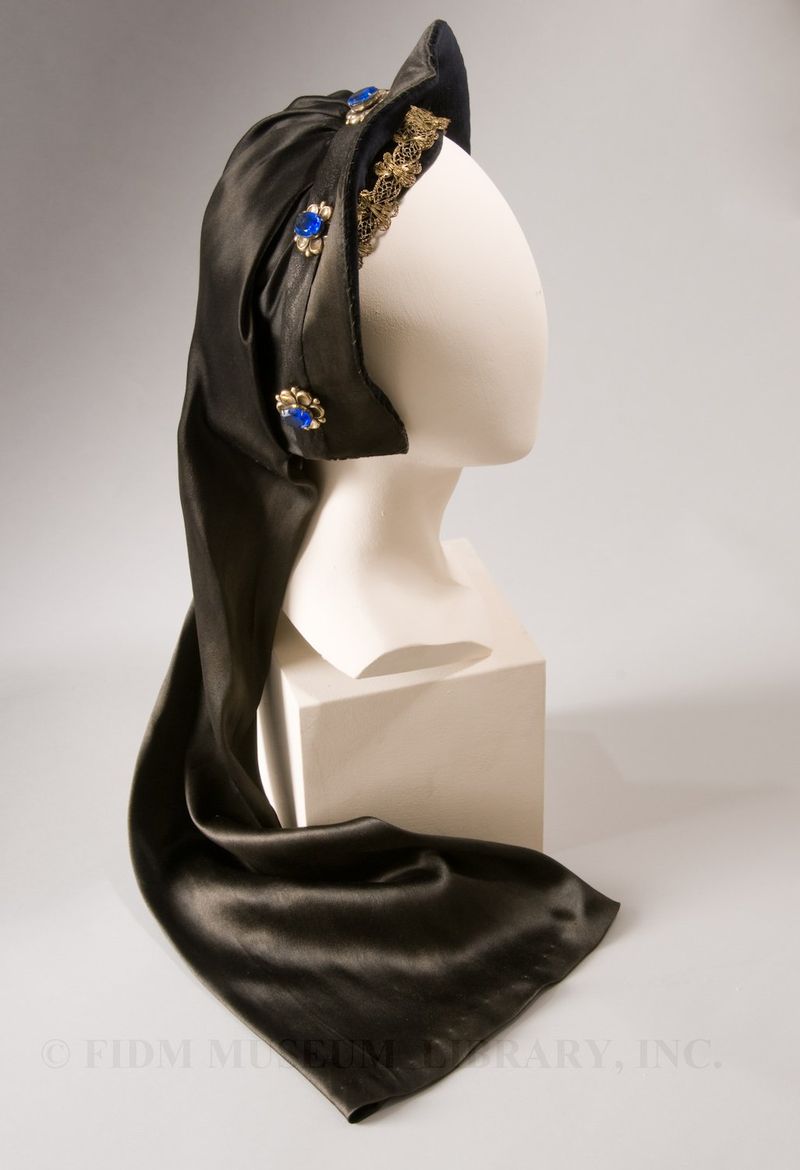 As authenticity in costume was important to Plunkett, he based his costume designs on extensive research regarding the period in question. When working on Gone With the Wind, he reportedly traveled extensively throughout the American south to view surviving Civil War era garments. There is no specific record of the sources he consulted when designing Young Bess, but based on his typical methods, he probably looked to paintings, period commentaries and costume history sources.

The head-wear seen in these images is based on the French hood, a type of head-covering which gained wide-spread popularity among aristocratic English women by the late 1540s. As the name suggests, this style of hood migrated from France to England, probably in the 1520s. Comprised of a stiffened foundation shaped into a curved, close-fitting cap and a veil-like fall of fabric at the back, the French hood was placed back on the head, covering the ears and exposing the center parted hair of the wearer. It was worn over a coif, a small cap of linen or silk which covered and restrained the hair. A French hood was almost always black, though sometimes white or red. This c. 1546 portrait of “Young Bess” shows her wearing a red French hood. On occasion, the length of fabric at the back was folded forward to protect the face from sun. When worn in this fashion, it was called a bongrace. 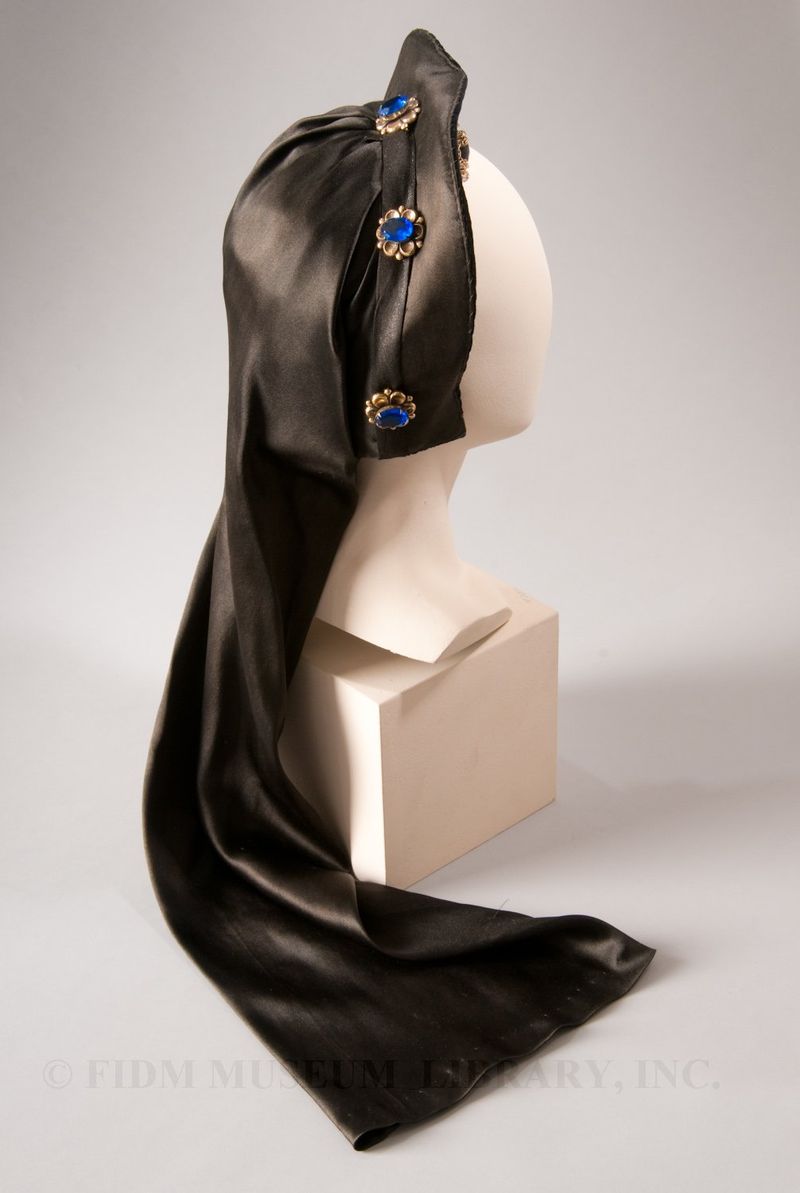 Of course, Plunkett’s version of the French hood departs somewhat from that worn by women in the 1540s. The standing brim is shaped differently and tilts forward rather than back. Jewels, such as the blue stones in silver settings seen above, would have been placed to be more visible from the front. Clothing of this era was used to establish social standing and such an obvious marker of position would have been placed so as to be easily spotted. In some cases, the jewels embellishing a French hood coordinated with either a necklace or with the jewels that often decorated the low, square necklines of the period. 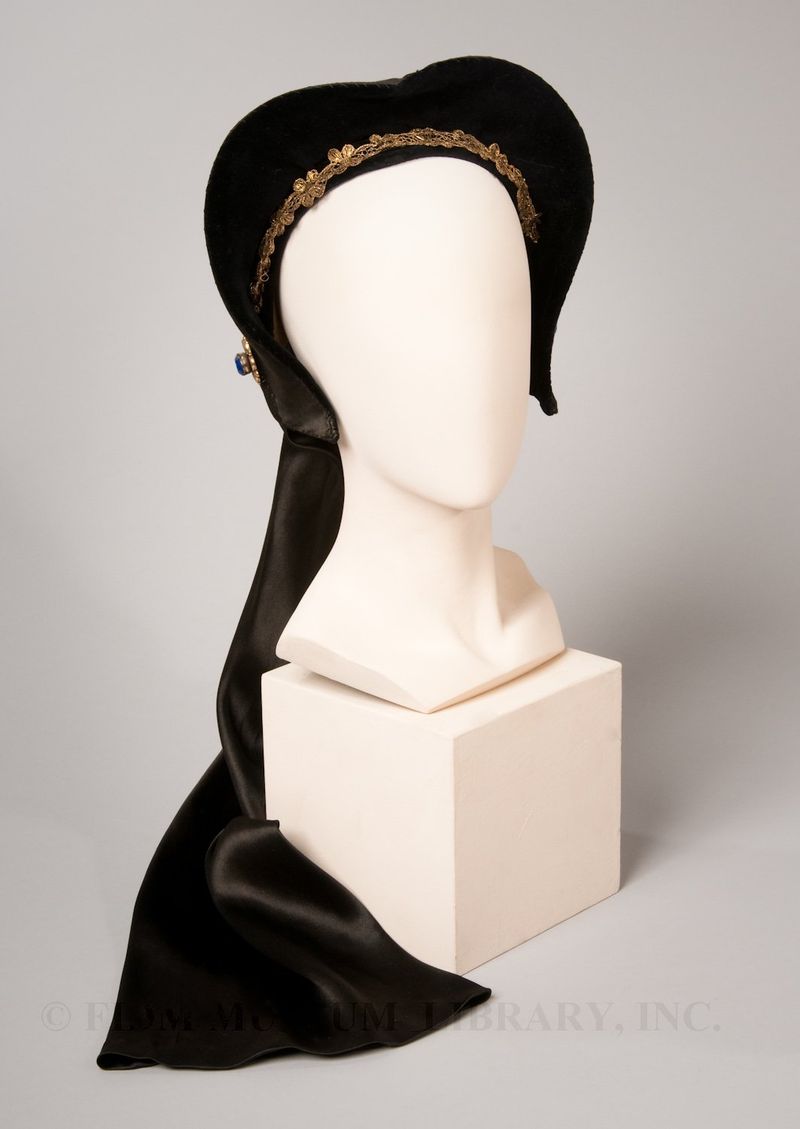 Possible inaccuracies in the Young Bess costumes didn’t seem to bother the movie-viewing public. Plunkett’s costume designs for the film earned him an Academy Award nomination for Best Costume Design. Plunkett didn’t win, losing the Oscar to Edith Head for her work on the Audrey Hepburn film Roman Holiday.

For readers in the Los Angeles area, let this post serve as a reminder to visit our current exhibition, The 18th Annual Art of Motion Picture Costume Design. The exhibition is free and open to the public and will close on April 17th, 2010. Hope to see you there!