Under pinafores, almost anything may lurk. They cover up playsuits, tennis dresses and sports frocks.1 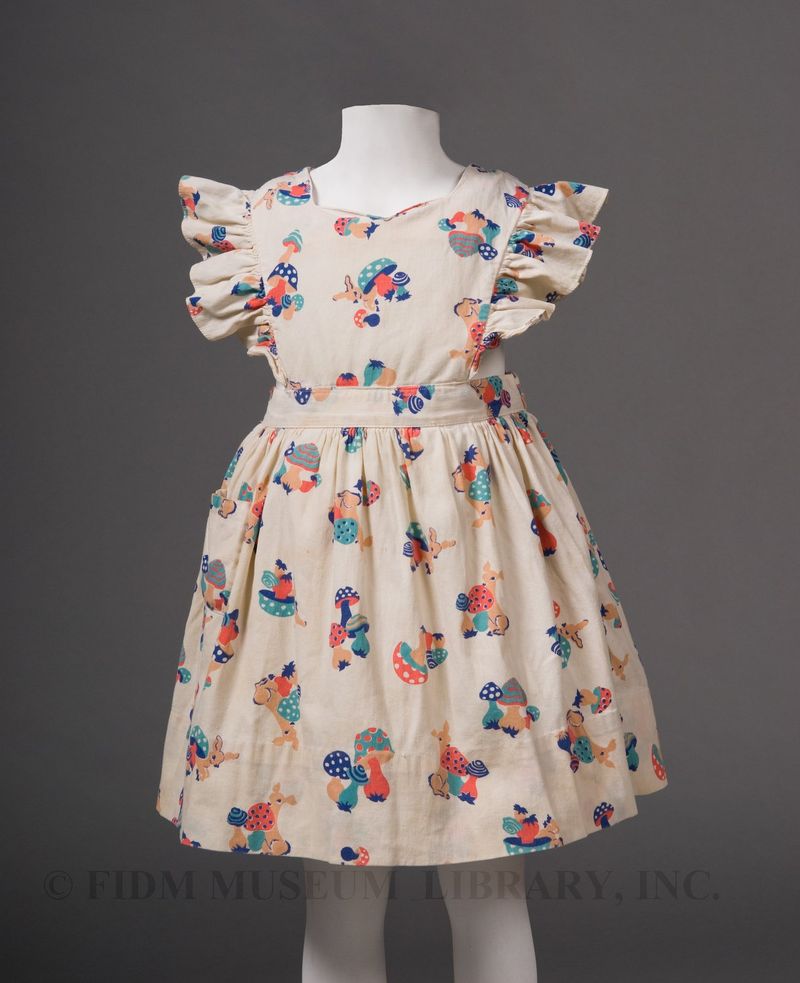 A contemporary pinafore is a short-sleeved girl's dress, usually worn over a blouse or shirt and fastened up the back. When constructed from whimsical patterned textiles, a pinafore evokes carefree childhood. But the pinafore actually evolved from a functional garment, the apron. The word itself is a contraction of two words, pin and afore (front). The earliest version of the pinafore was a protective, easily removable apron worn by pinning it to the wearer's dress.

Though cute textiles and decorative ruffles mask its origins as a functional working garment, a young girl's pinafore also functions as a kind of uniform. In the late eighteenth century, the writings of philosopher Jean-Jacques Rousseau altered the way children were viewed. Rousseau believed that children were distinct from adults, a revolutionary opinion at the time. In dressing children, Rousseau suggested that plain, comfortable clothing which allowed freedom of movement was best. By the late nineteenth century, this view was firmly entrenched, meaning that young children's dress was simple and practical.

Within this context, late nineteenth century girls, young women and sometimes small boys were dressed in pinafores. Extant garments and images suggest that pinafores were often made of plain white fabric, worn over dark dresses. When constructed from plain white cotton, it was relatively easy to wash, bleach and starch the garment back to normal if dirtied. These two late nineteenth century girls wear full pinafores over their contrasting dresses. Worn as an overgarment, a pinafore protected the clothing underneath, allowing the child to do her job. Like a maid's white apron, a pinafore signified the work of childhood: play, sometimes involving dirt or other messy substances. 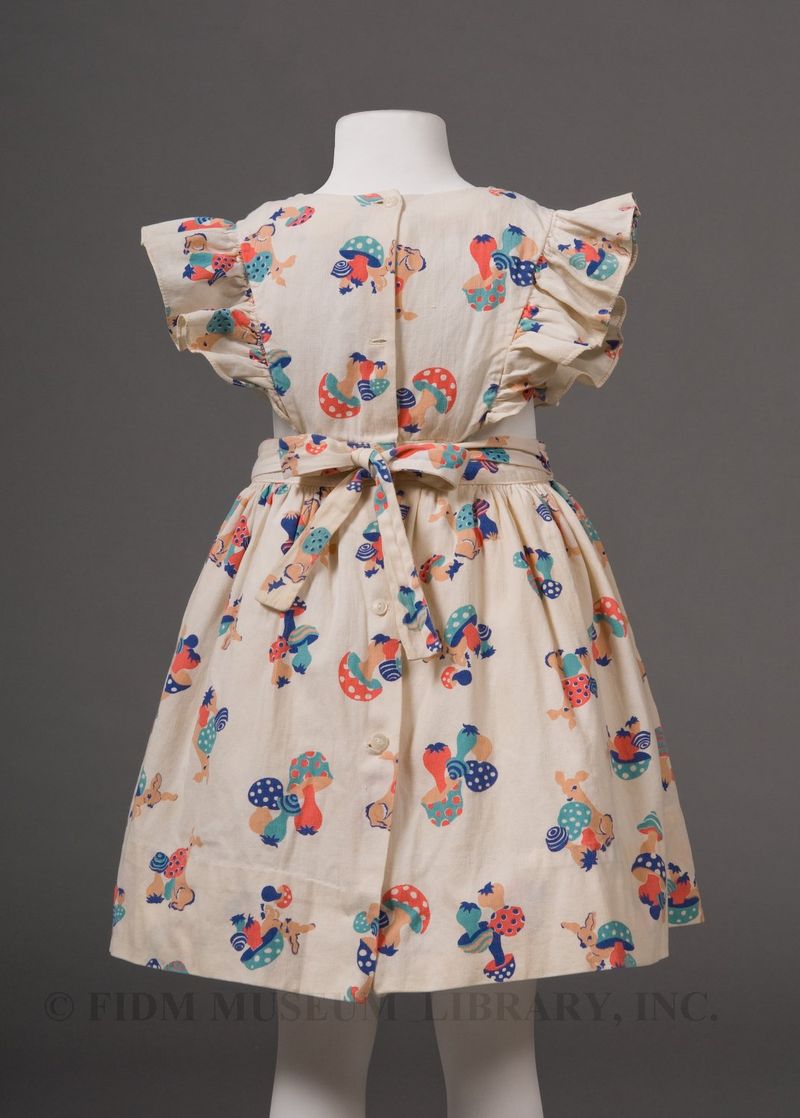 By the early twentieth century, the pinafore had become a garment unto itself. No longer a plain, protective overdress, the pinafore was the dress. In 1946, Life noted this shift in an article on children's dress, noting that "children used to wear washable pinafores over unwashable dresses. Now a pinafore becomes a washable dress."2 Instead of plain white, pinafores were made from textiles which reflected popular trends. Beginning in the late 19th century, fabrics were designed specifically for children's dress. Called juvenile prints, they often featured animals, toys or fairy tale characters. This ribbed cotton pinafore is printed with a pattern of fantastically large mushrooms and a young deer. The animated Walt Disney film Bambi was released in 1942, possibly influencing the design of this textile print.

Despite the advent of appealing patterns, pinafores remained a fundamentally practical garment. With one solid color pinafore and several blouses, a young girl had multiple outfits for school or play. Pinafores could also function as a cover-up, worn over a one-piece "sports frock" or playsuit. Twentieth-century pinafore marketing focused primarily on young girls and women, indicating that the garment was still associated primarily with youth. Adult women sometimes wore pinafore aprons, particularly during the late 1940s and early '50s, when aprons were a fashionable accessory. During the 1960s, pinafores had a moment in the fashion spotlight as a part of the little girl look. The 1960s sleeveless, A-line sheath dress is essentially an updated pinafore, streamlined for the space age.