Rudi Gernreich garments featured in A Queer History of Fashion

Rudi Gernreich garments featured in A Queer History of Fashion

We're delighted that two Rudi Gernreich garments from our collection are featured in A Queer History of Fashion: From the Closet to the Catwalk at the Museum at FIT. Open through January 4, 2014, A Queer History of Fashion explores the "significant contributions to fashion made by LGBTQ
(lesbian-gay-bisexual-transgender-queer) individuals over the past 300
years." Including approximately 100 ensembles ranging from 18th century menswear to 21st century high fashion, this exhibit honors the numerous, and often hidden, contributions of gay and lesbian designers. It has been getting wonderful press, so if you're in New York, don't miss it!

Rudi Gernreich (1922-1985) wasn't publicly out during his lifetime. Like many other well-known designers, Gernreich kept his sexual orientation hidden from the public. In private life, however, Gernreich was involved in important efforts to de-stigmatize homosexuality. In 1950, Gernreich became romantically involved with Harry Hay. Hay had been formulating an idea for an secret society supporting gay men, and was seeking like-minded men to join his group. Gernreich supported Hay's radical plan, and together with a small group of friends, they founded the Mattachine Society. The first branch of the Society was based in Los Angeles, though off-shoots soon emerged in other urban centers. With its emphasis on reducing isolation, and promoting common cause among gay men, the Mattachine Society was one of the earliest gay rights groups in the United States. 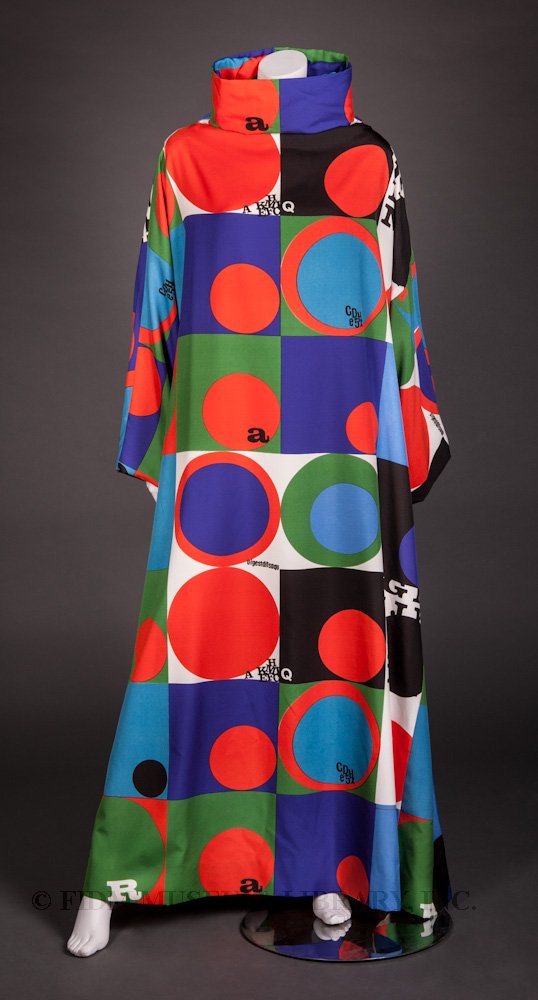 This caftan (one of two Gernreich caftans we loaned to A Queer History of Fashion) is the ultimate expression of Gernreich's dislike for fashions that confined movement. As a designer, Gernreich worked to liberate the body. His No-Bra bras, unlined bras offering a natural look, and the famous breast-baring monokini, demonstrate this effort. Though many of Gernreich's designs emphasized youthful bodies, with this caftan Gernreich proposed a unisex uniform for the elderly.

Created for Expo 1970, held in Osaka, Japan, this silk caftan was designed for maximum comfort. Instead of emphasizing the body, it was designed to abstract the body. In Gernreich's words, "If a body can no longer be accentuated, it should be abstracted."1 To distract from the body, Gernreich enlisted both the voluminous silhouette and the colorful, abstract pattern.

Like many of Gernreich's later designs, these caftans were intentionally unisex. To complete the unisex look, Gernreich recommended that both men and women shave their heads so that their gender was less recognizable. The designer's interest in unisex clothing can be considered another expression of his interest in sartorial liberation; dressing without regard to gender would allow both men and women to express themselves more fully, without regard for societal limitations.

See both of our Rudi Gernreich caftans in A Queer History of Fashion at the Museum at FIT through January 4, 2014. Hope you have a chance to see this exhibit! If you do, drop us a line and let us know what you think of Gernreich's unisex caftans.