Have you ever panicked over what to buy your Valentine? Women typically receive chocolates, roses, and teddy bears, but what is the classic Valentine’s Day gift for men? Perhaps this pair of silly novelty boxers, complete with an amorous pun and kitschy plastic toy, would be the perfect show of affection – a gift that could plausibly be found in the aisle of any Target or department store today. 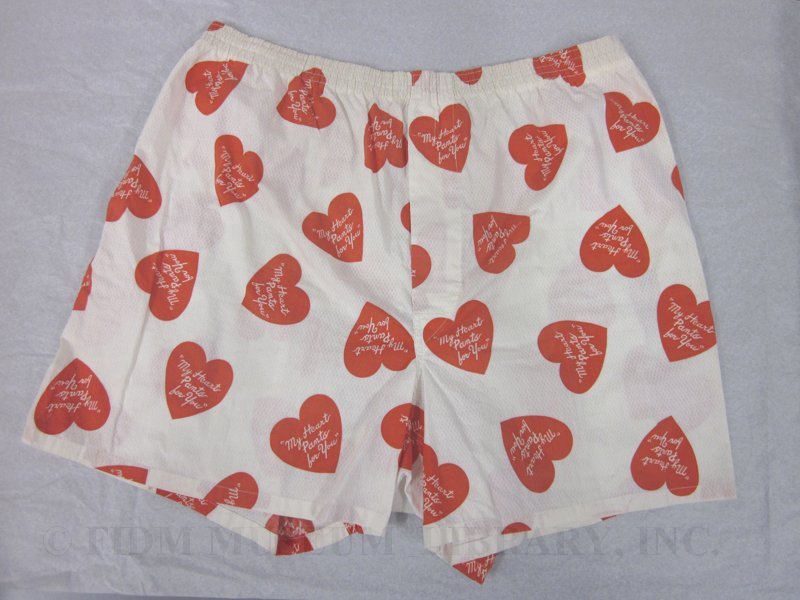 These white boxers are emblazoned with hearts that read “My Heart Pants For You,” and the matching vinyl heart toy has a mechanism that causes it to beat back and forth. Despite its modern appeal, you might be surprised to learn that this cheeky Valentine’s Day gift set actually dates to the 1950s. It was manufactured by none other than Jockey International, known as Cooper’s Underwear at the time. It’s a company that has a long history of pushing the boundaries in advertising male undergarments. 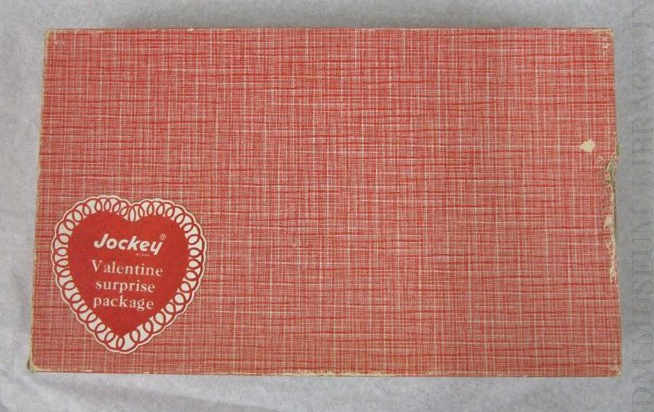 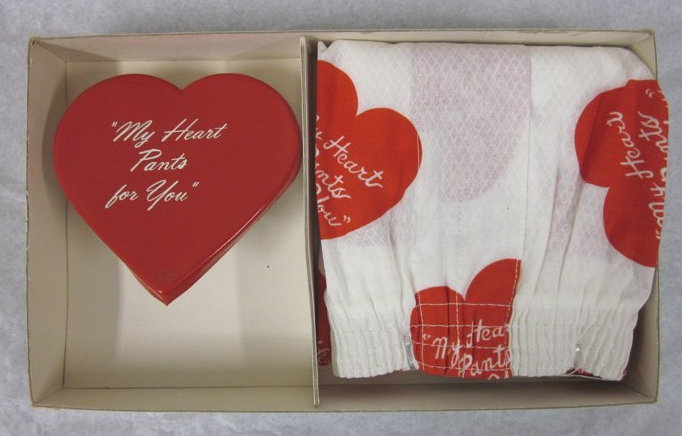 Boxers or briefs? Bill Clinton was famously asked this question at a 1992 town-hall meeting with MTV;[1] Michael Jordan then ingrained the debate into pop culture with his slew of witty Hanes commercials. We have become so comfortable with the question that everyone from athletes to actors to political candidates are now openly asked their preference. Yet prior to the twentieth century, neither of these styles existed. So how did boxers and briefs develop into modern man’s predominate underwear choice?

Undergarments in general serve a number of functional purposes; in the era before conveniences such as daily showers or central heating, they were essential to providing warmth, protection, and cleanliness. In the late nineteenth century, long wool pants, often joined together with a top in a style known as the union suit, were considered the healthy choice for men because of wool’s moisture wicking properties. Yet as early as 1909, underwear companies were advertising lighter weight shorts for the summer. However, this style truly gained popularity when it was provided for soldiers during World War I.[2] Returning war veterans continued to wear their standard issue shorts when they came home from the front, and manufactures quickly created styles to meet demand. According to “underwear mythology,”[3] the garment was nicknamed ‘boxer’ after celebrated heavyweight champion Jack Dempsey, who wore loose athletic shorts in the ring.

In the interwar years, comfort and freedom of movement became valued over traditional styles. For the adventure-seeking youth of the Roaring Twenties, sport and athleticism were now the highlight of modern living. Men’s undergarments used new, lightweight materials such as rayon, and streamlined designs to adapt to the sporting lifestyle. To further deviate from the underwear worn by older generations, manufacturers offered “a rainbow of colors and prints”[4] in addition to the ubiquitous neutral tones. Elastic-waist boxer shorts were embraced by Ivy League collegians and avid sportsmen alike

Cooper’s Underwear Company enters the story in the 1934 with a design innovation that received a riotous response. Arthur Kneibler, a company V.P., was sent a postcard from the French Riviera with a photograph of a man wearing brief-style swimming trunks, which gave him the idea for the so-called “Y-Front” briefs.[5] The new model provided the comfort of shorts with the support of a jock-strap, which the company alluded to by naming the style “Jockey.”[6] Jockey briefs debuted at Chicago’s Marshall Field and Company with an elaborate window display on January 19, 1935. Despite blizzard conditions, shoppers turned out in droves to purchase the design, and the store immediately sold out.[7] 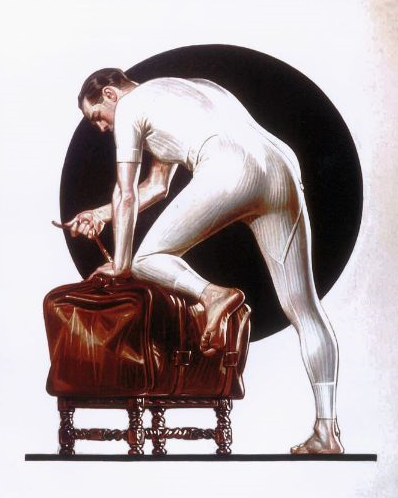 Man on a Bag
Advertisement for Cooper's Underwear Company
Illustrated by J.C. Leyendecker, 1911

It was not the first time Cooper’s caught the public’s attention with their bold advertising. In 1911, the company ran the first national print ad for men’s underwear in the Saturday Evening Post with an illustration by none other than J.C. Leyendecker, the artist famous for other figures of fashionable male identity such as the Arrow Collar man. The painting, titled Man on a Bag, shows a man wearing a Cooper’s union suit bending over to close his suitcase – highlighting both the ingenious design of the ‘Kenosha Klosed Krotch’ seat flap, as well as the model’s fit posterior. His muscular build and somewhat suggestive pose marked the introduction of male “sex appeal”[8] to market underwear.

Though the Cooper's Underwear Company ads evoked the likeness of muscular athletes and strapping Greek statuary to sell their products, they also used a healthy dose of humor. Unlike advertisements for female undergarments, which tend to portray women as desirable sexual objects, men’s advertising has the freedom to play with the “perceived ridiculous appearance of a man in his underwear.”[9] Whereas women’s ads of the twentieth century focus on achieving the fashionable silhouette, men’s ads joke about comfort and movement. A 1951 Jockey advertisement used a cartoon strip called the “Squirming Psychoanalyst” to show how uncomfortable underwear can cause embarrassing (yet ultimately humorous) situations.[10] 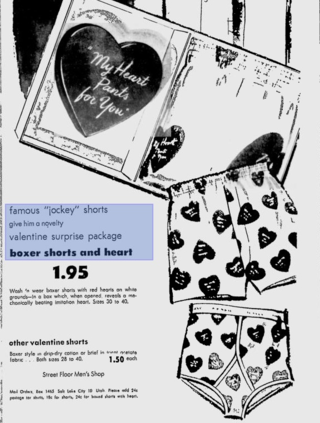 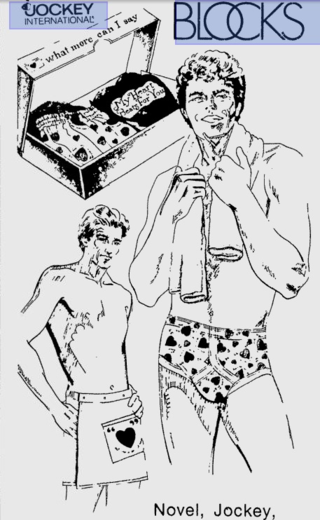 Post World War II, “colorful, novelty print boxers”[11] were encouraged as irreverent holiday gifts – which is where we find the comedic origin for the FIDM Museum’s pair of Valentine’s Day boxers. In fact, the Jockey Valentine’s Day promotion was a yearly tradition well into the 1980s, each version featuring a new amusing phrase and plastic toy manufactured by Yakity-Yak, makers of the famous wind-up chattering teeth.[12] Perhaps the wildly printed boxers were a precursor to the explosion of color, patterns, and slim bikini styles that were introduced to men’s underwear in the 1960s and 1970s.

These boxers represent the transition from utilitarian garment to a fashionable expression of a modern, active lifestyle. The humorous image of a man in heart-patterned boxers has certainly endured as a recognizable visual gag. Above all, this Jockey gift set remains a timeless, whimsical token of affection, just as suitable for the man in your life in 2016 as it was in the 1950s!