A Look at the ILGWU

A Look at the ILGWU

In honor of Labor Day, we want to recognize one of the largest labor organizations in the garment industry: the International Ladies' Garment Workers Union (ILGWU), representing the thousands of men and women who painstakingly made and manufactured women's clothing. The ILGWU was active from 1900 to 1995, but throughout its 95 year history it made great strides in demanding justice and fair representation for those working in an industry known for extremely hazardous conditions. 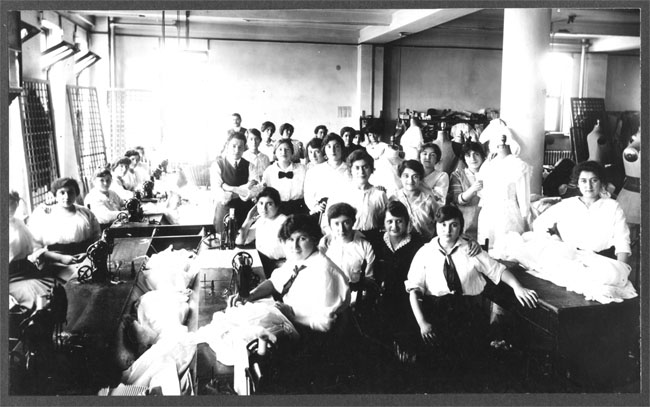 Workers in a garment factory, c. 1910. Courtesy of the Kheel Center at Cornell University.

The ILGWU was started in 1900 during the throes of the Industrial Revolution, when employers and workers clashed over dangerous factory conditions, unfair wages, long hours, and unsanitary environments. The garment industry in particular was rife with injustice, as factory owners took advantage of the largely immigrant workforce. Employees were forced to take sewing home to their cramped tenements, or worked in overcrowded factories with no breaks. The Yiddish lament below (translated to English) was sung in clothing sweatshops at the turn-of-the-century, before reforms reached the factory floors:

Day the same as night, night the same as day.
And all I do is sew and sew and sew.
May God help me, and my love come soon.
That I may leave this work and go. [1]

Large-scale strikes in 1909 and 1910 spurred compromise between the ILGWU and clothing manufacturer associations, resulting in the Protocol of Peace agreement that established fair working conditions and standardized payment structures. After the infamous Triangle Shirtwaist Fire of 1911, in which 146 workers perished because they were locked in on the factory floor, efforts were doubled between the government, social welfare groups, manufacturers, and the ILGWU to enforce safety regulations. Soon, ILGWU local branches expanded from New York City to other capitals of garment manufacture, including Philadelphia, Chicago, St. Louis, Los Angeles, and San Francisco.

Like many unions, the ILGWU was formed with a strong Socialist ideology. The organization provided education, healthcare, housing, and even recreation for its members. The union also raised money for socialist causes, providing funds for refugees fleeing the Nazis during World War II and making contributions to the Red Cross during the Spanish Civil War. Health Centers were established as early as 1913; in addition to general medical care, they addressed women's health and cared for ailments often found in garment industry workers, such as tuberculosis and respiratory issues from poor ventilation. 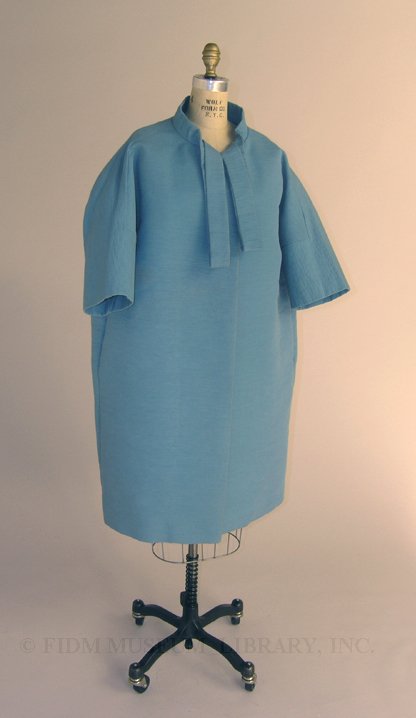 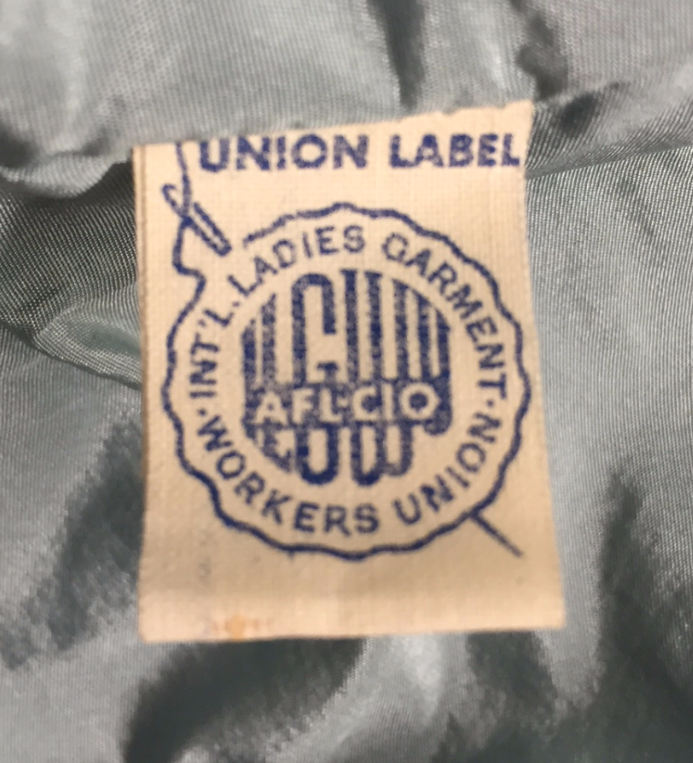 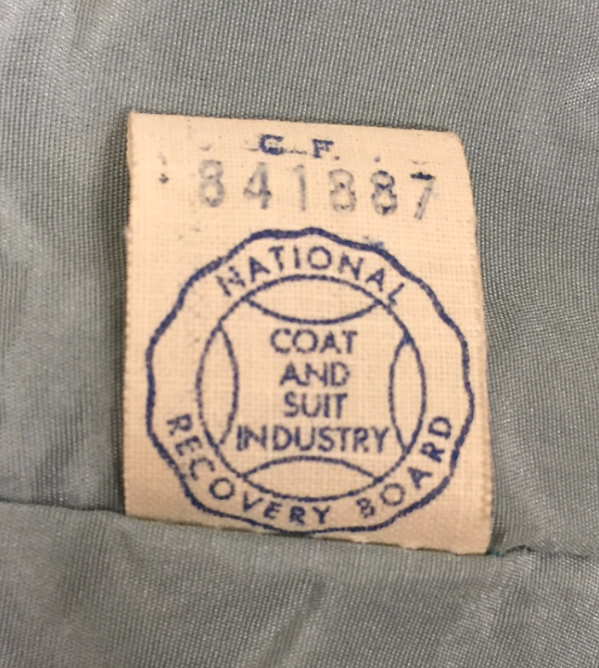 The garment industry was struck hard by the Great Depression in the 1930s – buying new clothing was not a priority in households struggling to put food on the table. President Roosevelt's New Deal and the National Industrial Recovery Act (1933) established fair trade regulations and helped the industry get back on its feet. After the NIRA was declared unconstitutional in 1935, manufacturers and union representatives voluntarily formed the National Coat and Suit Recovery Board to ensure that safe work standards and fair practices would continue to be enforced, as indicated by the label in the c. 1955 coat above. 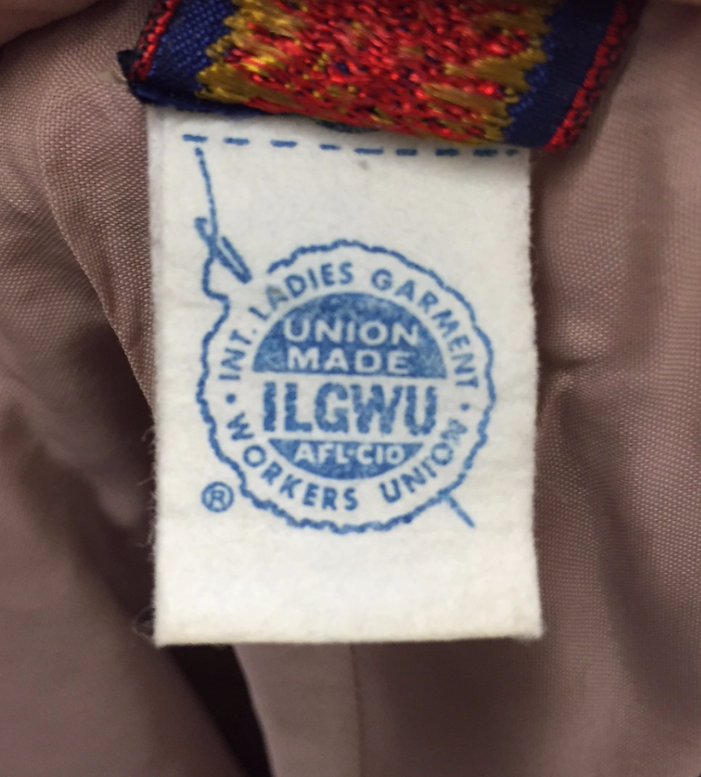 Despite fabric restrictions during World War II, the garment industry and the ILGWU continued to thrive, thanks to new factory assignments manufacturing parachutes and other military accessories. The post-war years saw the ILGWU embroiled in political conflict caused by the country's sweeping anti-Communist outlook; members were forced to sign non-Communist affidavits, instigating a major battle between the ILGWU moderate leaders and its radical members. Nevertheless, the union grew tremendously under the strong leadership of David Dubinsky (1892-1982), who held the President position for over thirty years (1932-1966). Though an official ILGWU label was introduced at the union's inception in 1900, it was not used by the majority of manufacturers until the 1930s. Dubinsky made the use of the ILGWU label compulsory in 1959. 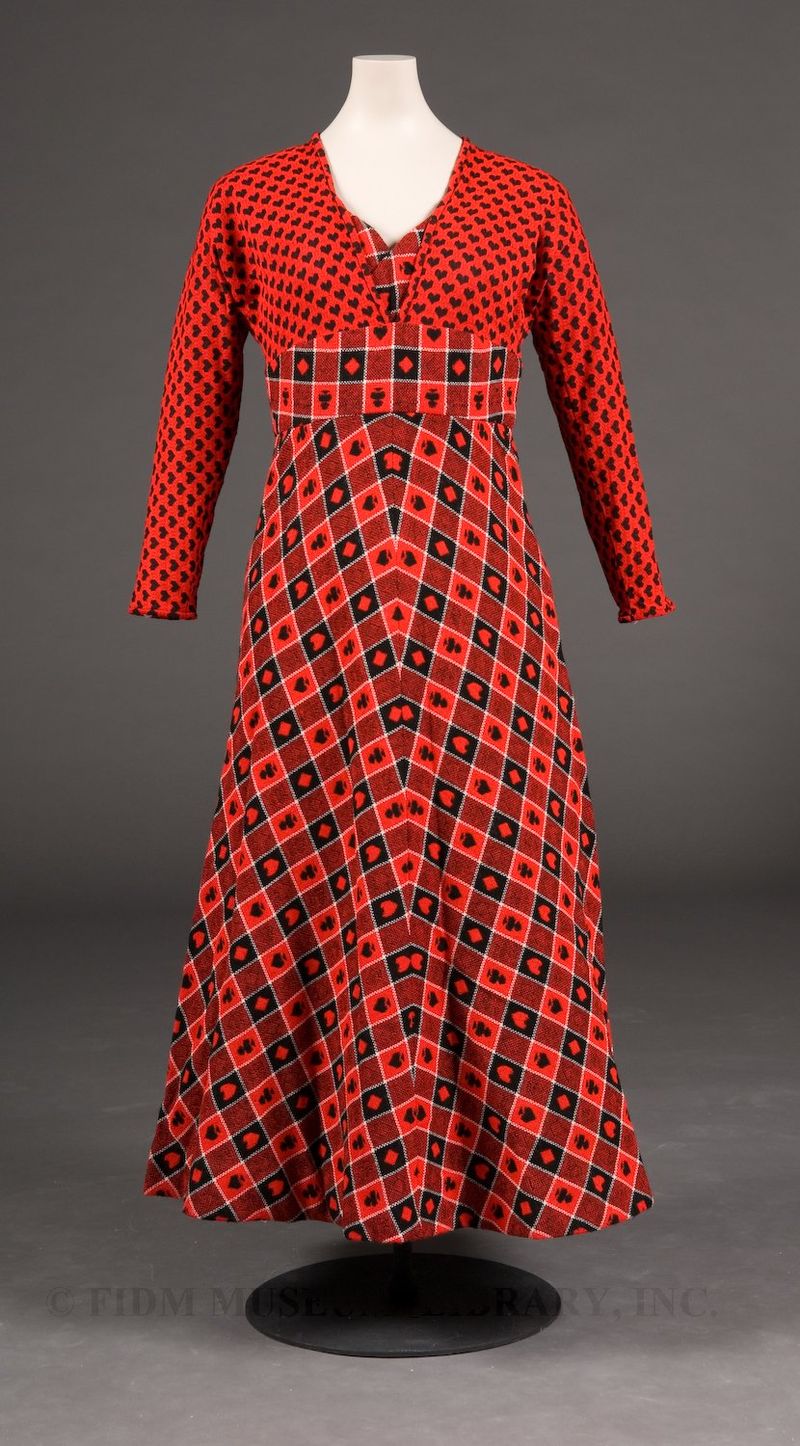 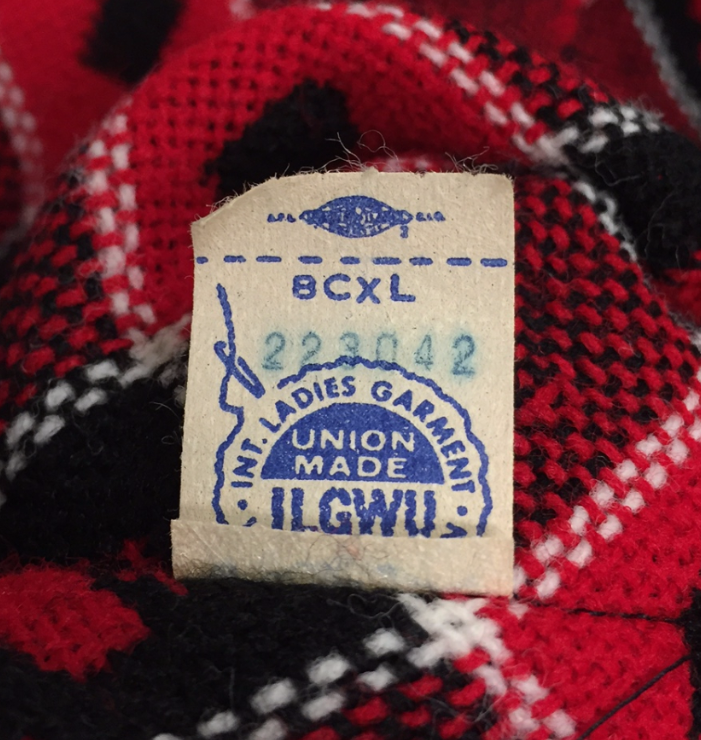 The ILGWU struggled in the 1970s and 1980s to keep up with a rapidly changing industry. Clothing manufacturing was sent overseas as cheap imports threatened the local market. The workforce itself also began to change; undocumented immigrants made up a large portion of garment workers, and unscrupulous employers used the threat of deportation to prevent them from joining the union. In 1995, after experiencing great membership loss, the ILGWU merged with Amalgamated Clothing and Textile Workers Union to form UNITE: the Union of Needletrades, Industrial and Textile Employees. Five years later, this organization then merged with the Service Employees International Union. 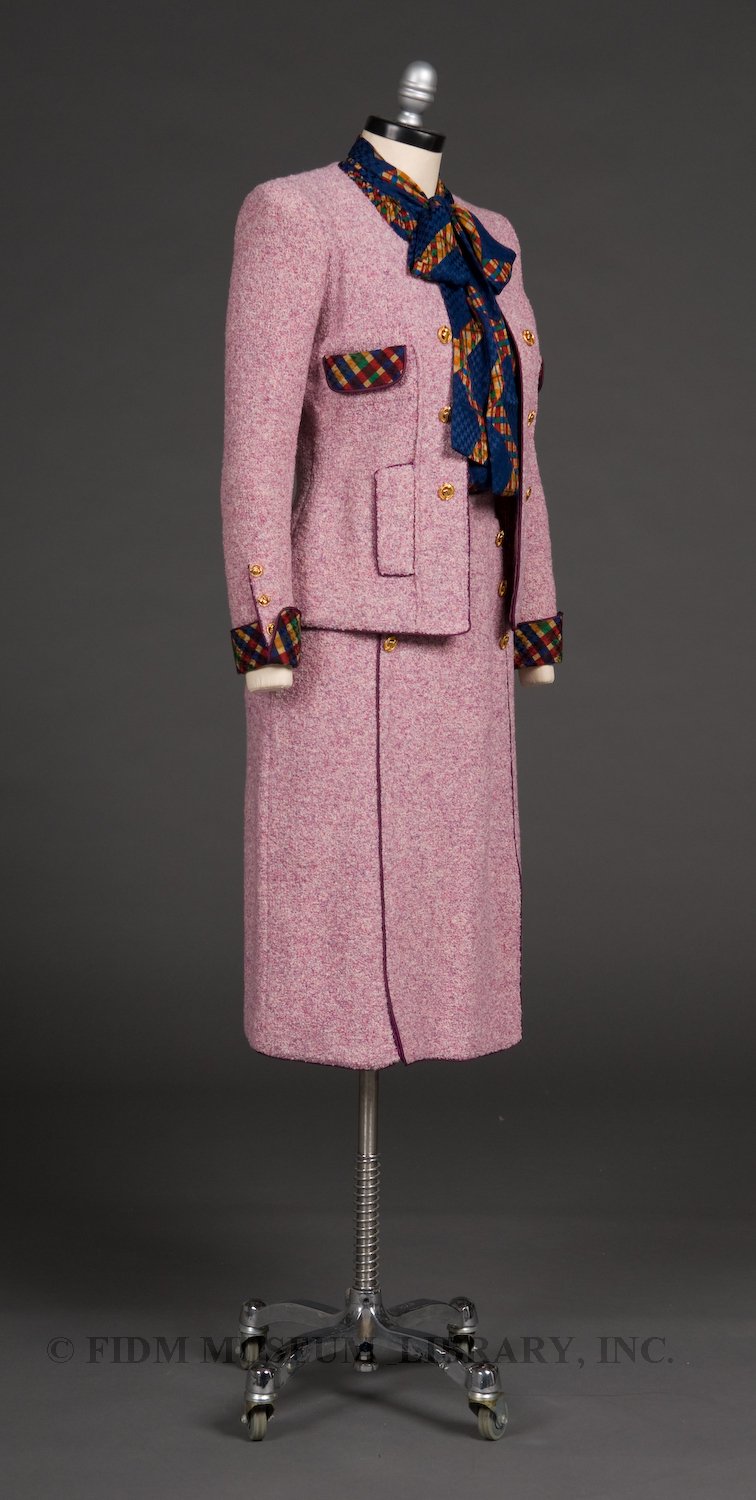 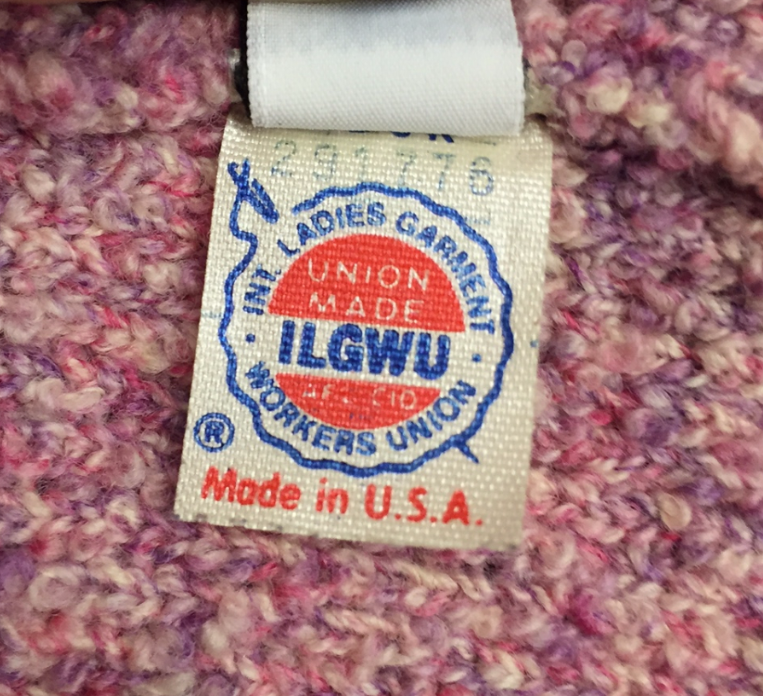 The ILGWU was the first union to represent a majority of women workers, and established humane working conditions that set an example for all labor unions to follow. As the fashion industry struggles with the regulation of garment production, maintaining safe factories, and providing fair working conditions, the ILGWU's achievements are made all the more admirable.

3 responses to “A Look at the ILGWU”