Game of Thrones costume designer Michele Clapton visited the FIDM Museum yesterday to discuss her GOT-themed jewelry collaboration with Yunus & Eliza. Before her Q&A panel in front of a packed house, Michele spoke with us about her final season designing for the blockbuster show, how taking a break to work on The Crown benefited her return to GOT, and of course that spectacular white coat. See the costumes in person at the Art of Television Costume Design exhibition – but hurry, the GOT costumes are leaving early! The final date to see them is Saturday, September 22. 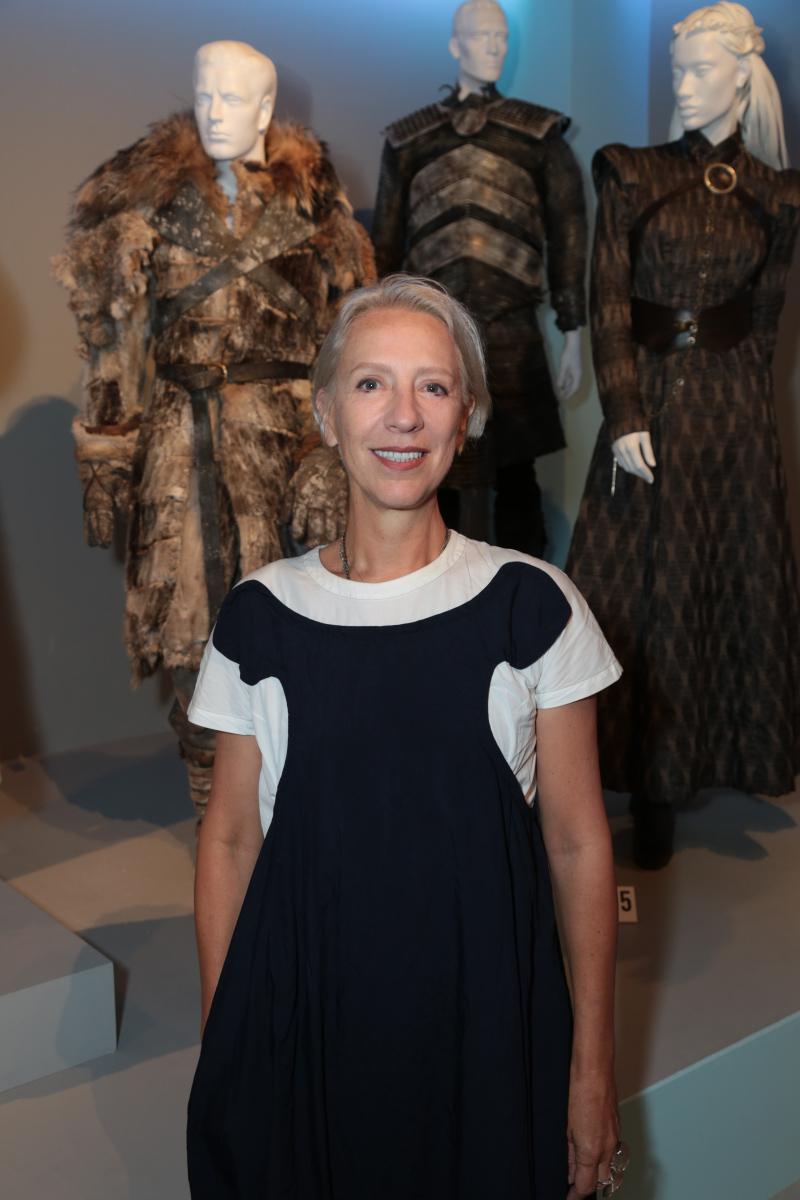 Michele Clapton in front of her Game of Thrones costumes, currently on display in the Art of Television Costume Design exhibition until September 22.

You’re done with filming, so this is a good time to look back at your work, which is profound on this show! Is there a character you feel you have been able to develop the most sartorially?

I guess Dany, coming from almost nothing. When we were starting to catalog all of the costumes, I found her first dress. It’s just so simple. Actually I found the dress from the pilot, when it was a different Dany, which was really interesting. We’re going through warehouses full of costumes, and we’re just trying to put them all in bags now so that they can get saved. So yes Dany is the most evolved on the show. 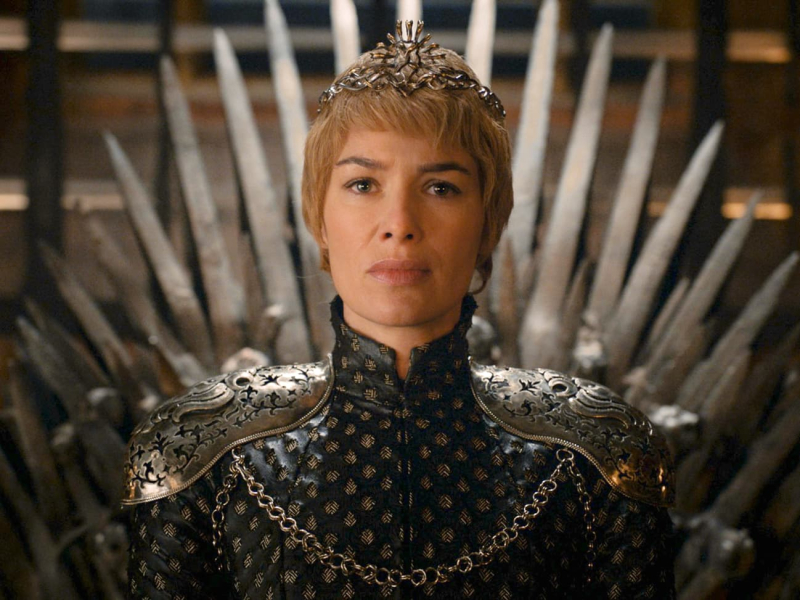 Is there a look that stands out, something that you are the most proud of accomplishing, your labor of love?

It’s hard because there are so many costumes! I think because I did decide to leave in season five – and it was a really hard decision to make – but I felt like I needed to do other stuff. And then got asked back in six to do Cersei’s coronation. I really enjoyed doing that costume because it was almost just a step back into it, and I’d had time to look back and think about it and think about the female characters. I love the fact that all the female characters are so strong. I think her coronation gown was one of my favorites. 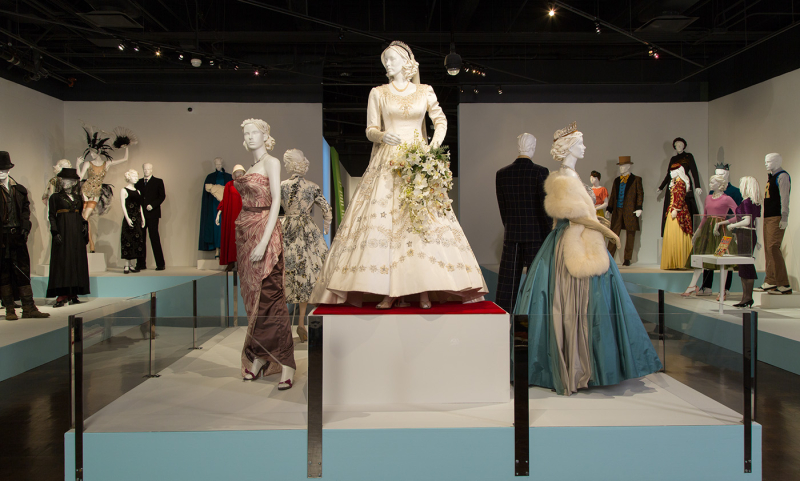 You mentioned leaving for a period; what do you think you gained from that time away from the show?

I think sometimes just to step back from something. My intention was not go to back – I really wanted to go and do something else, and The Crown was a great project. Stephen [Daldry, Executive Producer] had asked me personally, and I really like his work. It was just a breath of fresh air. Stepping back, I could look at the story lines, I could look at what had happened, I could look at the history of the show and actually felt that it was just right to step back in. It’s really hard to explain – it wasn’t difficult. I thought it might be difficult to pick up again but I read the script quite quickly, and I knew so instantly how Cersei should be, looking back at the arc of her story and her relationship with her father. I always try to make the clothes visually tell something – she said very little in that whole scene. I think you could tell it was based on her father’s costume…there were so many elements to it, I loved it. Then to pare down the crown into just simple strokes that to me looked like a lion still, that’s what they’re meant to be, but without that sort of solid heraldic lion that she’s usually worn. I quite liked the idea that it was a move away from that. Which then ties into Dany, the way they look at each other later on. 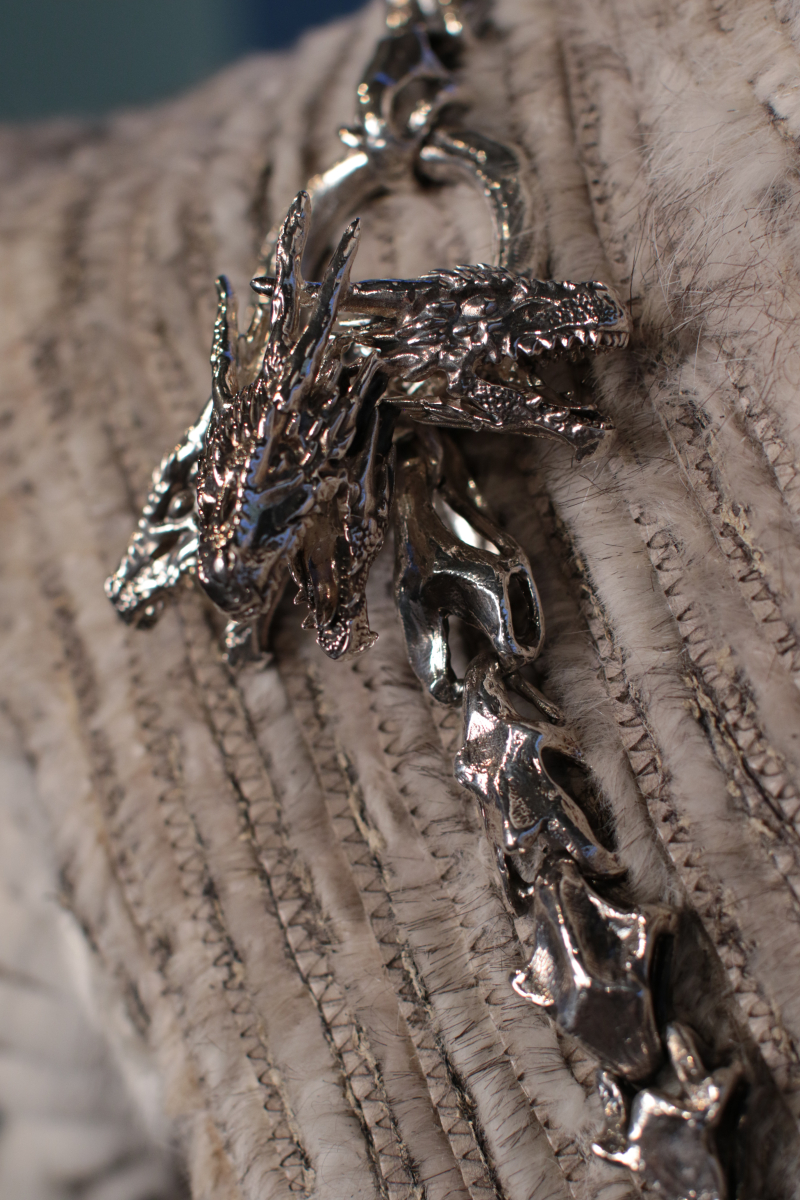 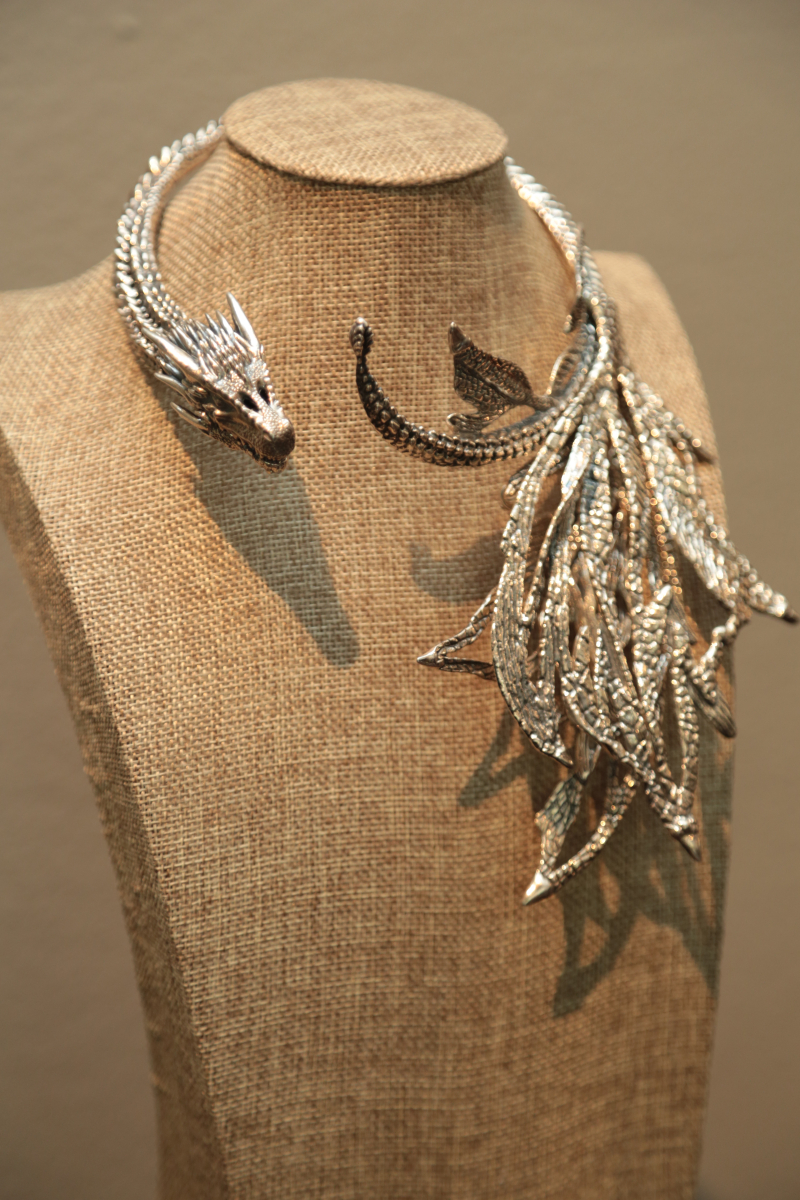 You’ve talked about how Dany doesn’t wear a crown, so she displays her royalty in her militaristic body chain and other strong pieces, which are now represented in your jewelry collaboration. How did you take what you had done for the show and put that into this collection?

When I wanted to design more things for Dany, I started drawing and just doodling around with elements of dragon, because obviously I wanted to relate it to her. One of my assistant designers said ‘you really should talk to Yunus and Eliza, do you know their work?’ And I didn’t, but when I saw it I thought this is exactly where I want to go – it’s jewelry, but it’s not pretty, it’s a statement piece, it’s showing intention. So I met with Yunus and Eliza and they were very excited to do it too. So it evolved after that. They did the big piece for Dany, the big dragon sculpture. Because they come from fashion, and I used to do fashion, there was this sort of lovely chance for us to come together and expand the range. Now we’ve expanded it out over two or three seasons. Actually now Dany is wearing pieces from the collection which is quite funny. We’ve already designed something that she’ll then wear later. We’ve also expanded out who wears it to show allegiance, so certain people will wear the rings to show their allegiance to Dany. I’ll draw it, and Eliza and I will talk together about how we make it possible. It’s often Yunus who sculpts it. Then we make it in silver and we actually have it made in India. The company who makes it does all the really high end designers, and they agreed to do Game of Thrones because they were fans. So that was really sweet! Otherwise we would have never got this company to do it. Their attention to detail is exquisite and they are really beautiful. 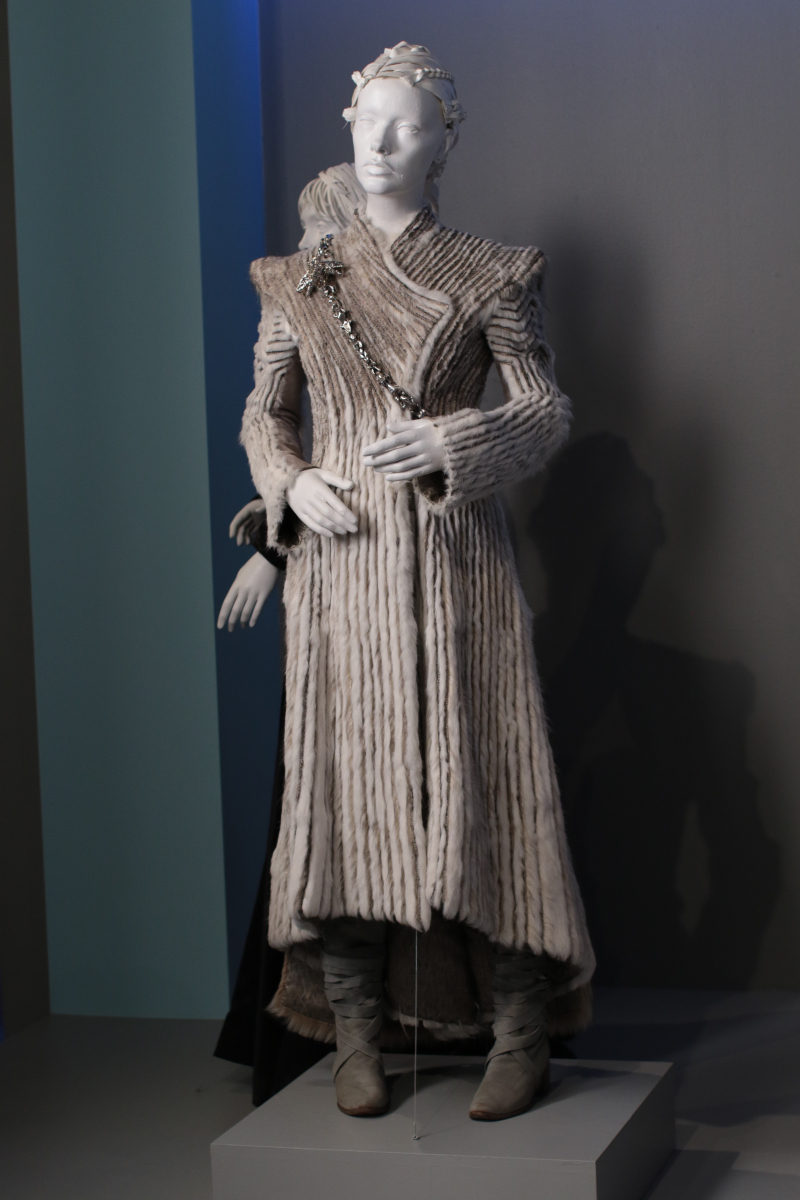 We are all fascinated with the textiles you choose. Can you tell us about the choice of fabrics?

We use quite a lot of furnishing fabrics. We often buy them and then we just try things out on them. We sometimes boil them, or we use the back of them or we spray into them or we paint into them, and we often embroider into them as well. It’s pretty rare for us just to use something as it arrives. We always try to process it in some ways. For Dany’s coat we actually created the fabric by putting strips of fake fur and leather together and creating panels and mounting those onto other panels, and then mounting those onto a corset. It has to fit incredibly well. It isn’t that strong laterally because it’s glued in strips, so we had to put it on something that could take that strain of her running around and jumping onto dragons!

And the back of the coat is meant to look like a dragon’s spine.

Yes, that took a really long time. On this one [on display] it’s okay, but I think we’ve refined it much more. And sometimes you’re up against it, you have this time and it’s not actually exactly how I want it but we’re going to have to go with it. And then Hair Department will say it’s too high at the back, so then we had to cut it down! 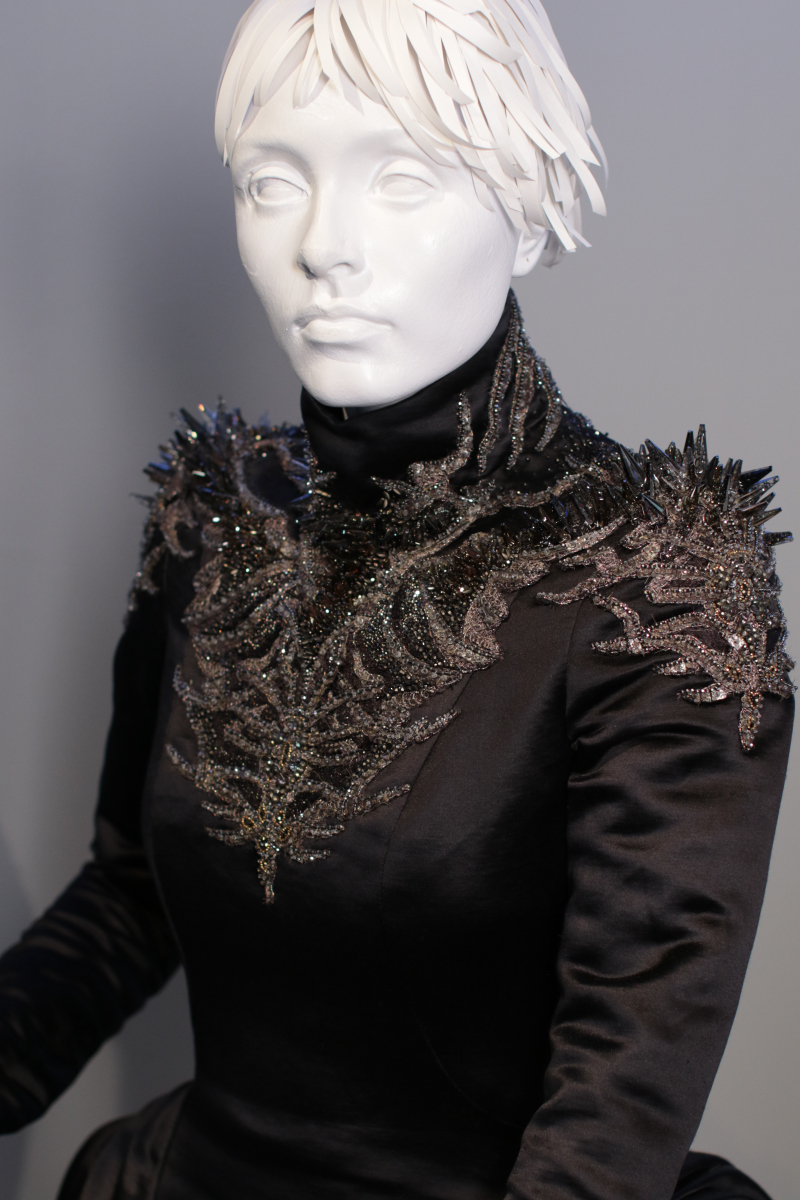 The other costume in the exhibition that has gotten a lot of attention is Cersei’s beaded black gown.

For that I really wanted her to be in black because it’s what she’s about at the moment. But I knew she would go down into the cellar and it would be dark. I just wanted those pieces to catch the light, the flames. So it was quite excessive!

I’ve always wanted to try to do that, the rolling of the panniers. Sometimes it’s quite nice to take things literally and interpret them. It’s a classic cut.

Did you look back at a fashion moment for that look?

How you get your inspiration for the costumes – is it just an amalgamation of everything you’re seeing, or do you do specific research?

I research all the time, and then I’ll want to have the scripts, so I’ll look at where it is, what that character has been doing, why they’re doing it, where they would get things from. And then it starts focusing in, and the colors become really important. For Dany, she’s looping back to her house colors. 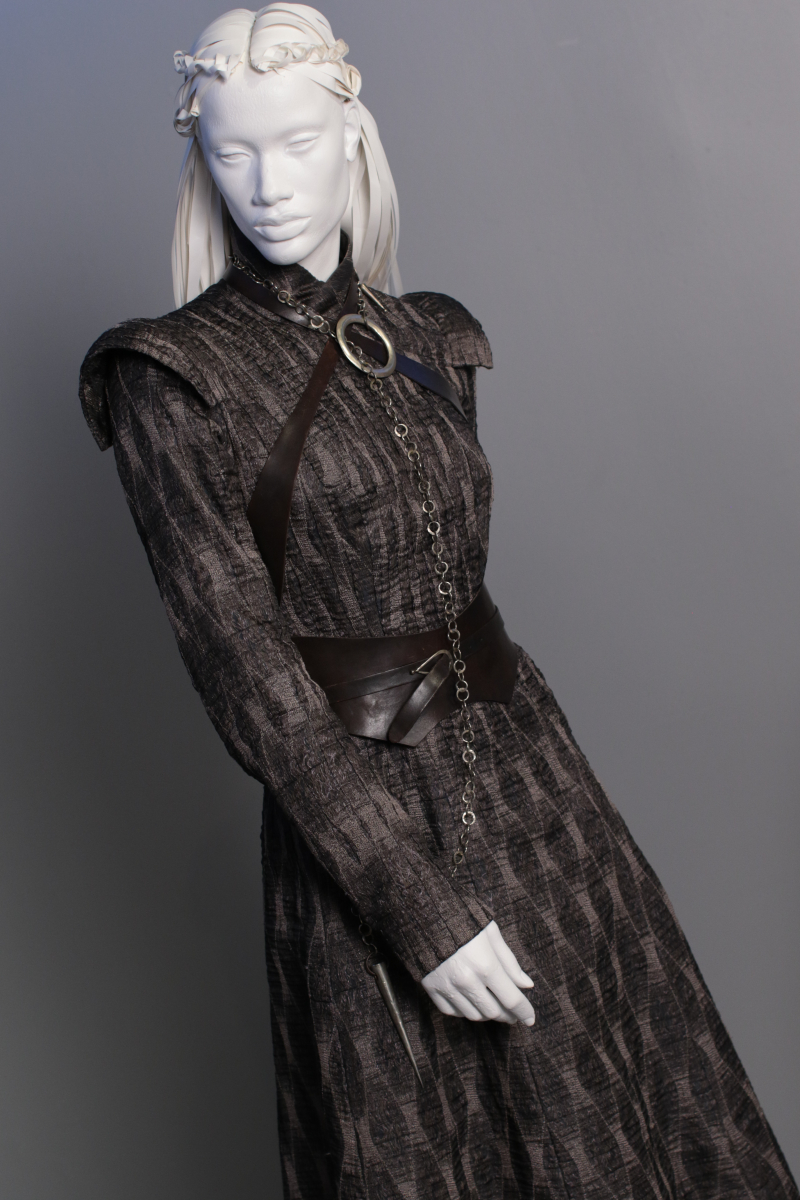 Is Sansa’s fabric one of the furnishing fabrics?

I think it is – it might be the reverse side. I thought it looked like fishes swimming. I think we worked into it a bit – it’s beautiful. We found some great fabrics that year, and this year we struggled to find such great things so we had to do a lot more work within the actual fabric. But it’s so interesting when you boil something and manipulate it – I love doing that! 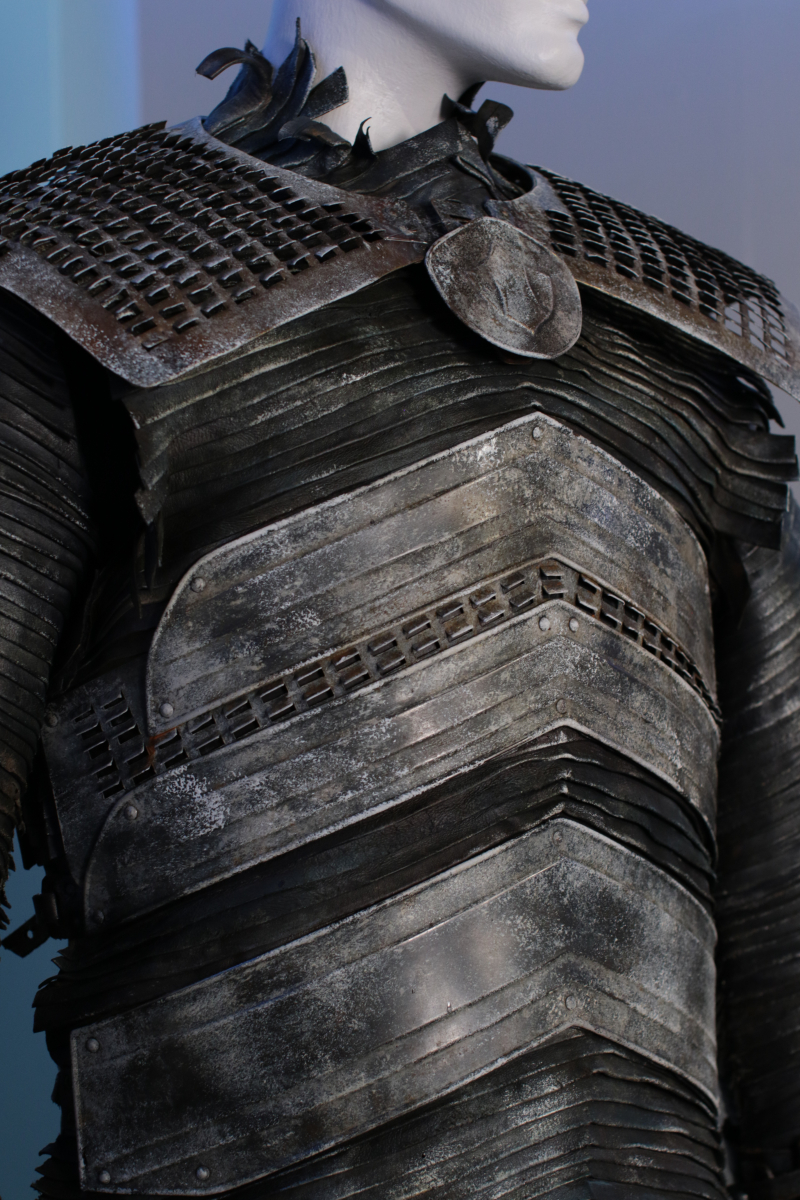 Did they use metal works for the White Walker costumes?

For his pieces yes, we make those in house. They hate making that more than any other costume! It’s really hard to do. It’s metal and leather. I think they did more leather for stunts. The originals are all metal. I wanted it to look like they’d been found, they were something else and they bent them to create armor – so the idea was that they were from some ancient civilization and they had just bits they found. It did transform through the process. Before you could see it had architectural elements to it, but that evolved.

What do you hope visitors take away from seeing your costumes in person at the Art of Television Costume Design exhibition?

I just think the standard of make and the thought that goes into it. They are really quite beautiful pieces and that’s what we’ve always tried to do on the whole show, is to be really thorough about the design and that it stands up to really close looks. There’s no overlocking, there’s no machining where there shouldn’t be – and I think it’s really important that people get to see this. Which is why I love the exhibition here, you can actually see the details, and it’s great for me to see the other shows as well. But I think with the way TV is now the screens are so big you need to do it properly, because you see everything! It’s not like in the past it was a little square box you could hardly see, when you could make crowns out of cardboard – you can’t now. 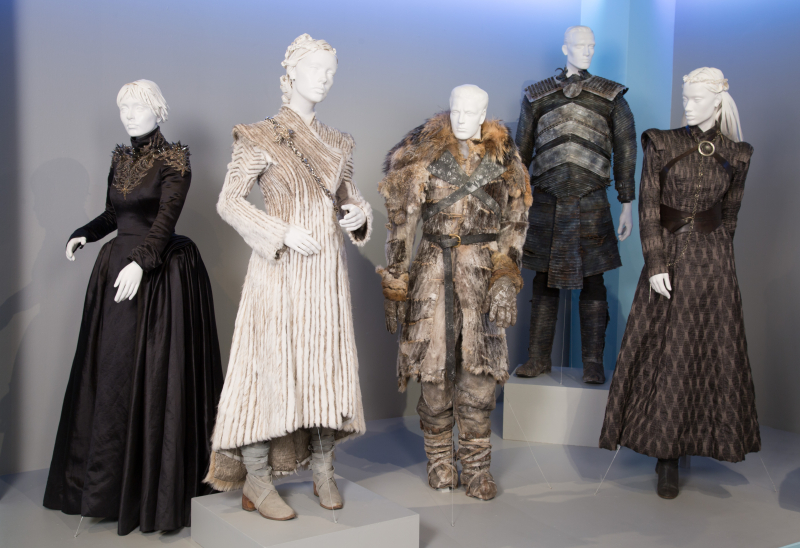 Michele Clapton’s Game of Thrones costumes on display in the FIDM Museum’s Art of Costume Design exhibition. GOT costumes on view until September 22 only.