The following post was written by Christina Johnson, Associate Curator of the FIDM Museum. 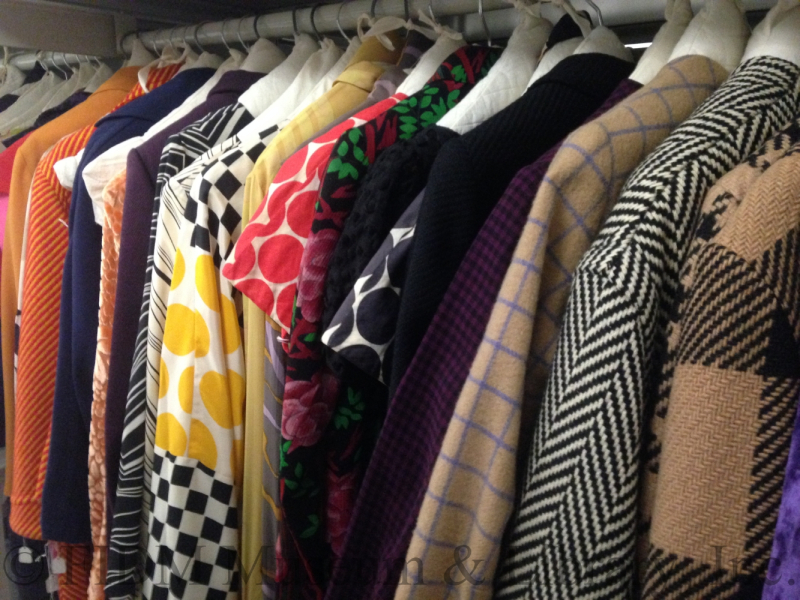 Reorganizing and cataloging the FIDM Museum’s Rudi Gernreich Archive was one of the first projects I began after being hired as Collections Manager in 2003. Although at that point I was very much a nineteenth-century specialist, handling his pieces tempted me to venture a century beyond my beloved crinolines and black-and-white daguerreotypes, and onward to mini skirts, psychedelic colors, and a happening mid-century Los Angeles scene. Since then, I’ve had an abiding interest in this intriguing LA-based designer. I’ve spent hours poring over the FIDM Museum’s collections, as well as archives held by other institutions. I’ve also had the honor of connecting with people who were an important part of his world. 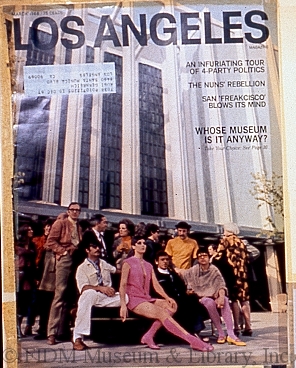 I’m interested in the personal reasons curators decide to embark on certain exhibitions. I’m drawn to Gernreich because of his brilliant fashion designs, and the fact that many are held by the FIDM Museum. I’m also fascinated by the histories of my own backyard. Gernreich called LA home, and I was born here, as were my parents. I also tend to be mesmerized by the object trails people leave behind, and what this ‘stuff’ reveals about multi-faceted personalities. Gernreich is one of those people who left a massive amount of material for us to analyze. 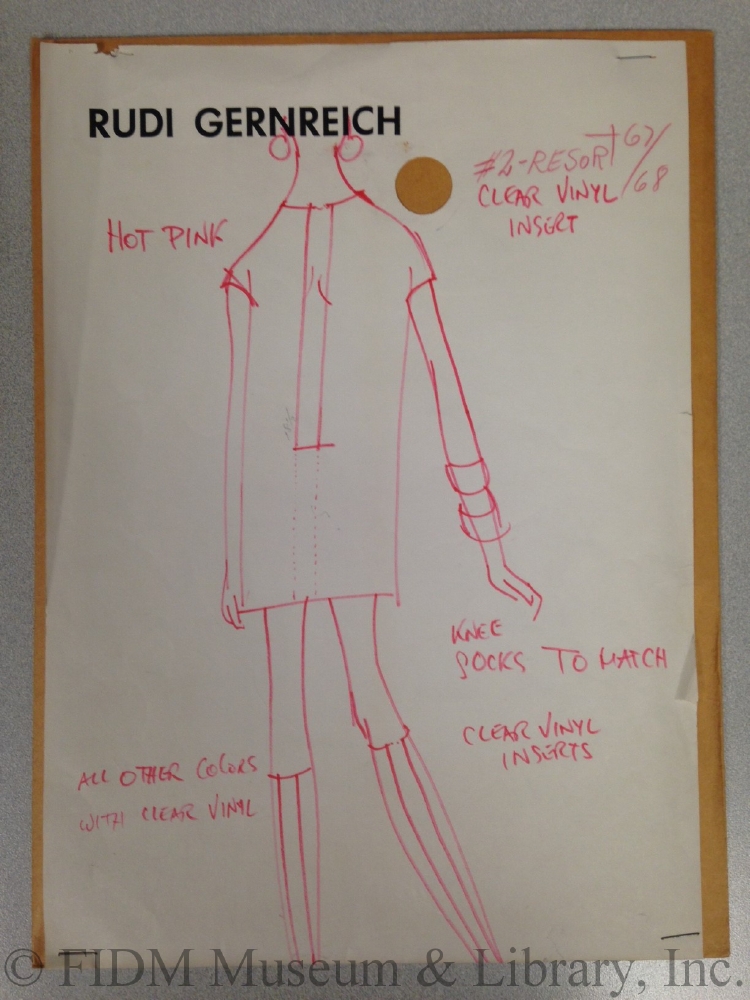 Rudolf “Rudi” Gernreich (1922-1985) had an extensive output and his designs survive in collections across the United States. Major holdings include: the Costume Institute at the Metropolitan Museum of Art, the Indianapolis Museum of Art, Kent State University Museum, the Cincinnati Art Museum, and at our neighboring institutions, the Los Angeles County Museum of Art and UCLA Special Collections. Shortly after the designer’s death, his estate bequeathed his private archive to the FIDM Museum. We welcome all researchers to the archive who wish to explore Gernreich’s creative life. It includes runway samples, headwear, jewelry, footwear, prototypes, and Gernreich’s personal wardrobe. It also contains ephemera such as patterns, catalogs, sketches, and the publicity scrapbooks assembled by Layne Nielson, his Assistant Designer from 1964 to 1969. I give grateful thanks to Layne for his extensive oral histories in 2017 and 2018. 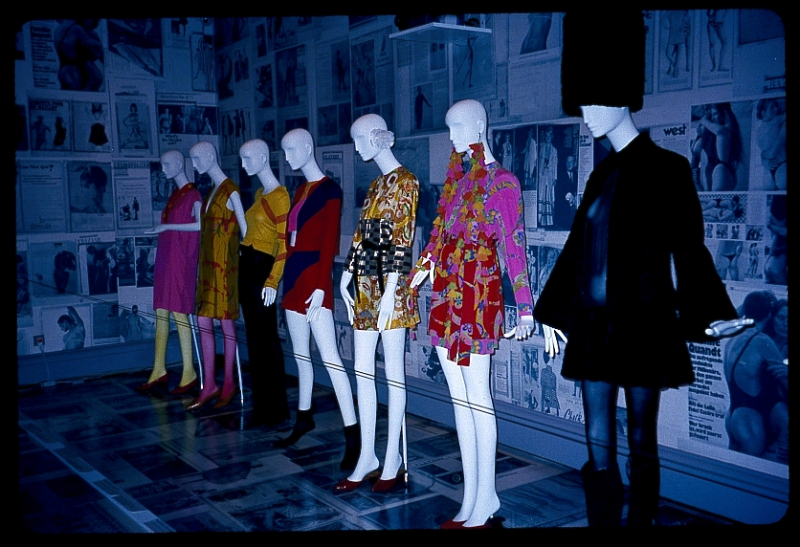 Selections from the FIDM Museum archive have been loaned to numerous exhibitions, most recently Gender Bending Fashion at The Museum of Fine Arts, Boston (2019); The Museum of Modern Art’s Items: is Fashion Modern? (2017-2018); and LACMA’s Reigning Men: Fashion in Menswear 1715-2015 (2016), later traveling to the St. Louis Art Museum and the Powerhouse Museum, Sydney. Exhibitions of note focused solely on this designer’s work include: Rudi Gernreich: A Tribute, curated by Layne Nielson at Otis-Parsons Exhibition Center, Los Angeles (1985); Fashion Will Go Out of Fashion, organized by Brigitte Felderer at the Neue Galerie Graz in Austria (2000), later traveling to the Institute of Contemporary Art, University of Pennsylvania; and the Kent State University Museum’s Rudi Gernreich: Bold by Dr. Anne Bissonnette (2008-2009). 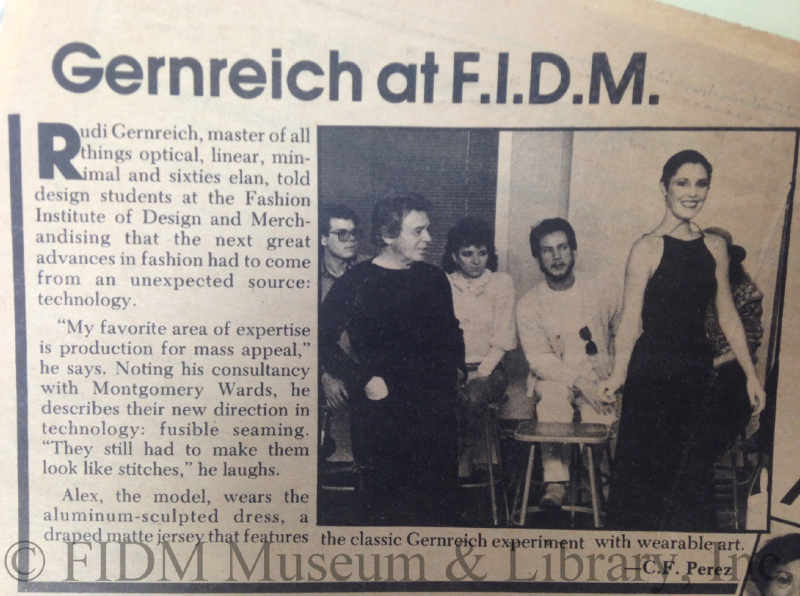 I’ve noticed an increasing interest in examining Gernreich’s legacy these days. Museums are presenting exhibitions and his contemporaries are being interviewed.  I’m excited to announce that the FIDM Museum is planning the retrospective exhibition and corresponding catalogue Rudi Gernreich: Fashion Maverick – a fresh analysis of the designer’s creative timeline, artistic circle, and cultural impact. I’m looking forward to celebrating his legacy at the FIDM Museum, and will share more details about the project as we continue our deep dive into research! Until then, here’s a sneak peek at some recent acquisitions, because we’re continuously adding to the original bequest. 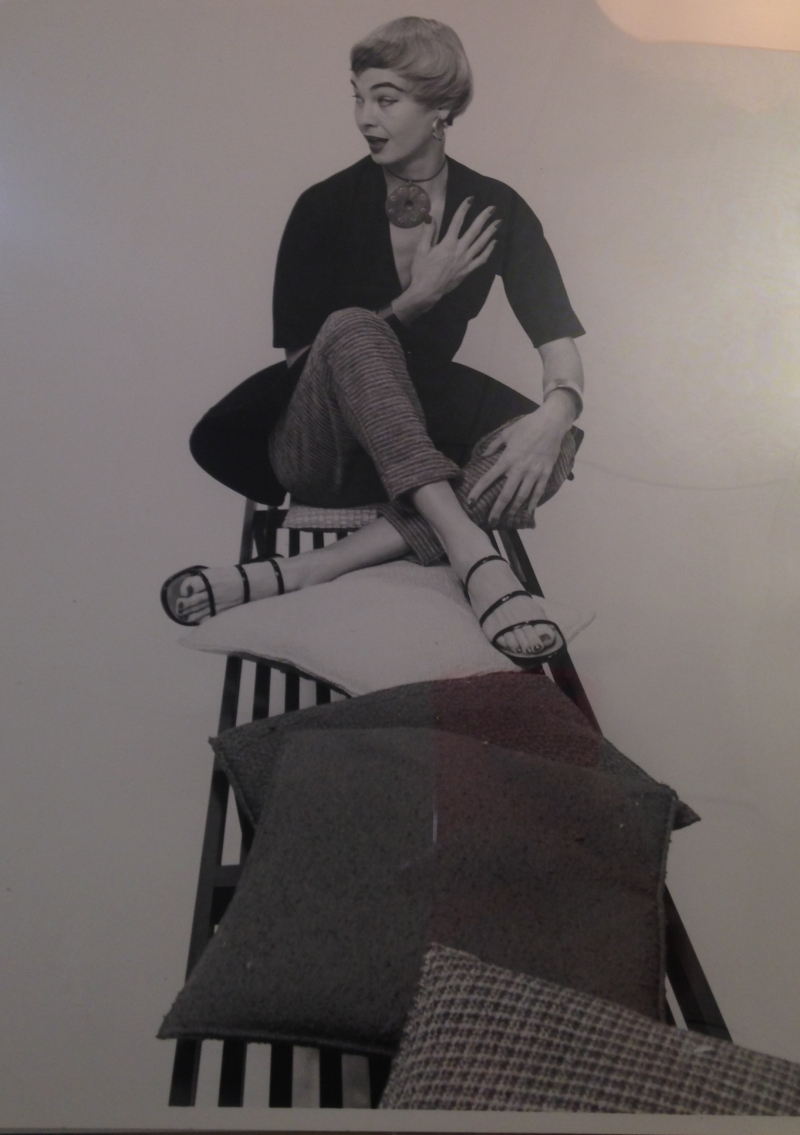 Today, many people equate Gernreich’s name with model Peggy Moffitt, primarily because of her popular autobiographical publication, The Rudi Gernreich Book (1991), filled with photos of her posing in some of his well-known mid-1960s and early 1970s looks. They were snapped by photographer William Claxton, Moffitt’s husband, oftentimes after the black-and-white media photo sessions directed by Gernreich. The designer had a number of favorite models over the years, including Léon Bing and Ellen Harth during the 1960s. It had been Katherine Cassidy and Jimmy Mitchell during the 1950s, when he achieved acclaim for California sportswear with innovative shape and proportion. 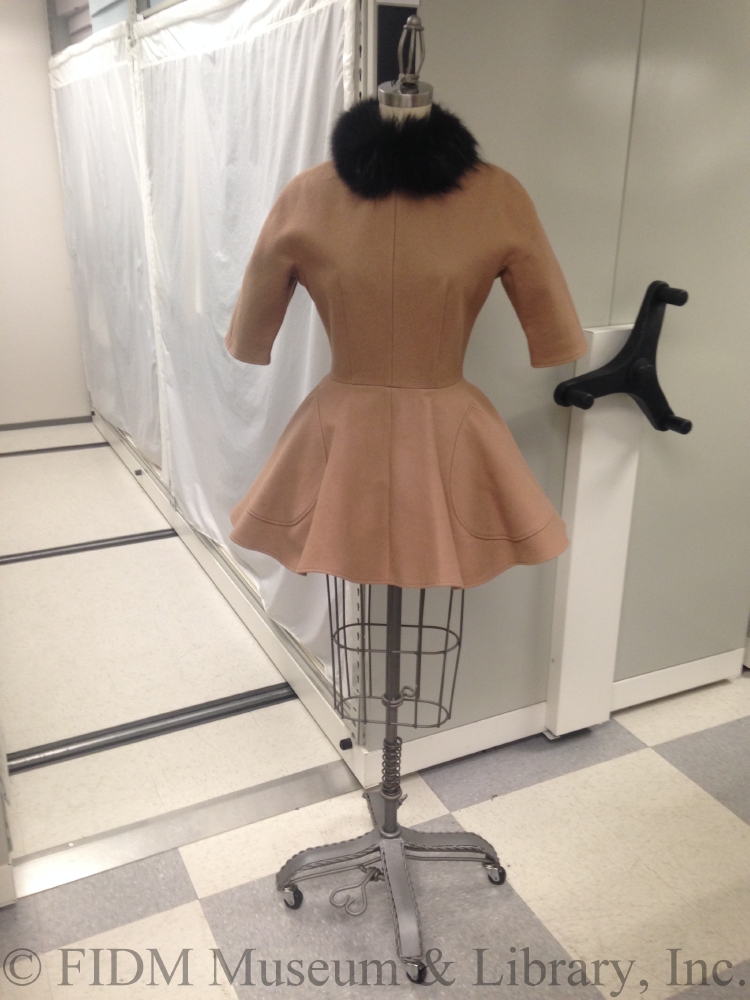 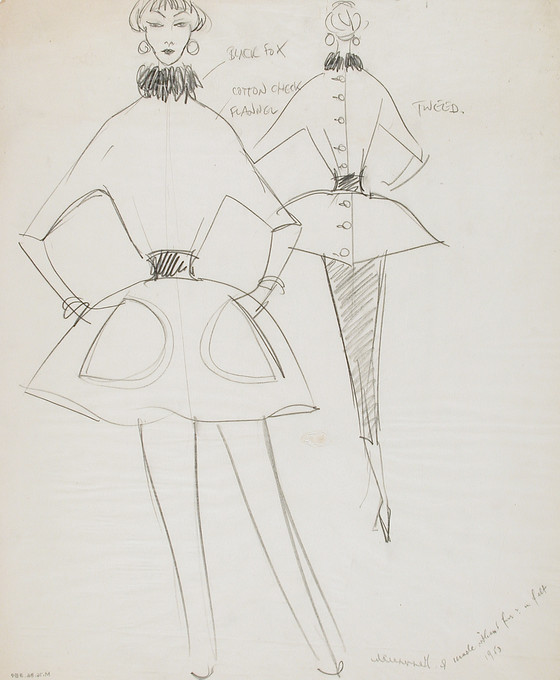 This felt tunic dates to 1953 and looks quite different from the mod designs generally aligned with Gernreich.  It was part of a line he designed for Walter Bass during the 1950s and was sold by the trendy Beverly Hills boutique, Jax. This earlier era is my favorite period of Gernreich’s work, in part because many of his first design themes (or, as I like to call them, “rudimentals”) continued with renewed energy throughout the 1960s. I was happy to find this rare piece recently, and LACMA even has the corresponding illustration (see above). Now I’m on the hunt to find the matching pants and belt—please let me know if you find them! 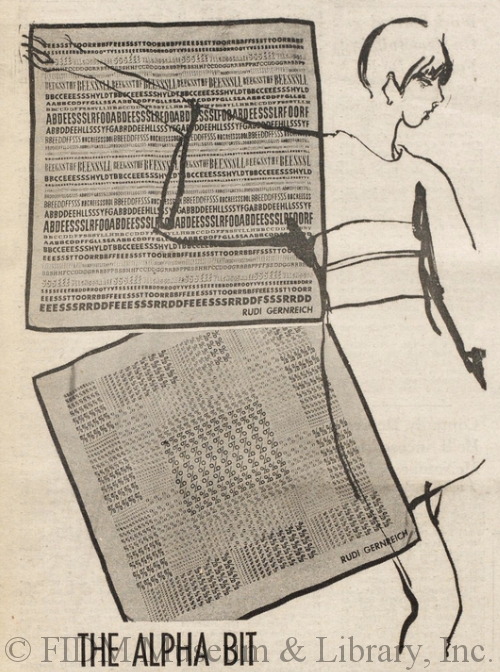 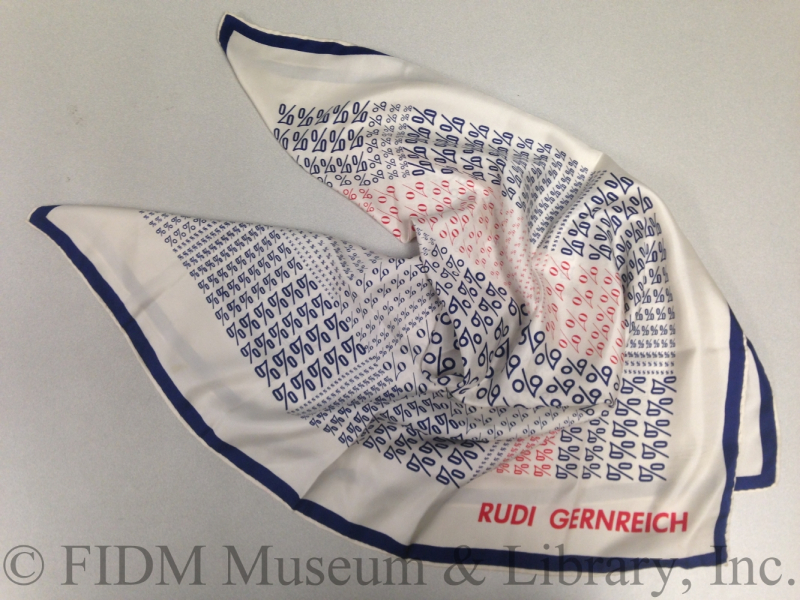 Although Gernreich showcased head-to-toe dressing on the runway during the 1960s—which he deemed “The Total Look”—with everything from coat to skirt, stockings and shoes matching, I’ve discovered through oral histories that he encouraged women to accessorize ensembles as they saw fit, either with contrasting elements from his own brand, or with those by other designers. The Glentex silk scarf line was a novel option for personalizing ensembles. I recently learned the repetitive font and linear layout elements on this scarf were inspired by a well-known office supply from the era. The letters, numbers, and punctuation signs came positioned together in horizontal lines in typeset books and adhesive sheets. The fonts were used for designing stationary and labeling files. This scarf series transposes the utilitarian paper design to a version in decorative silk! 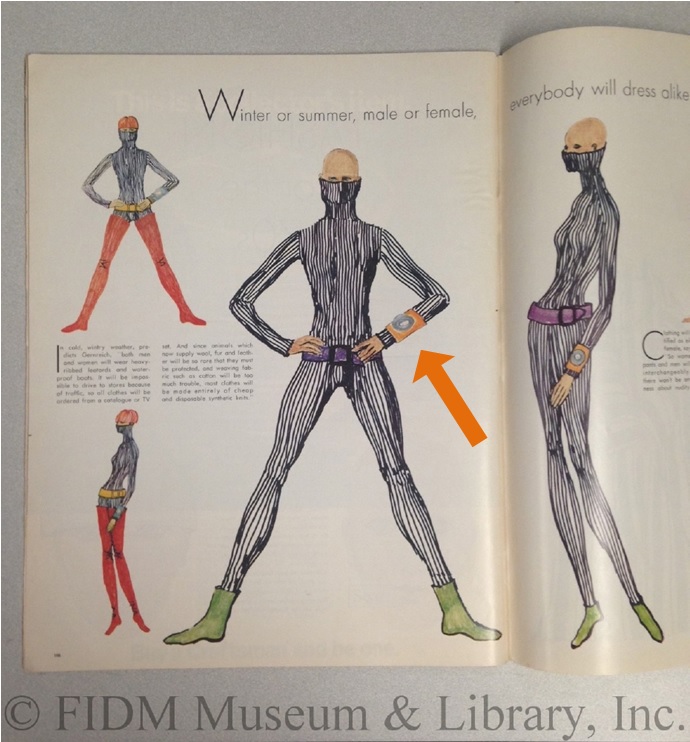 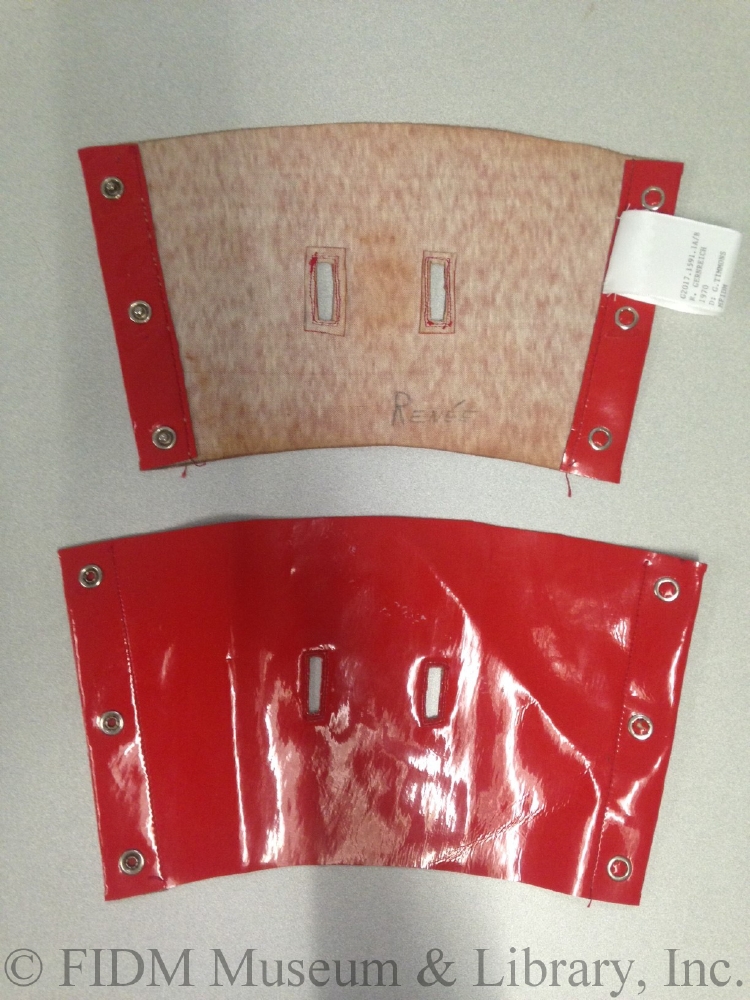 Another recent acquisition came by way of the Stuart Timmons estate. Timmons knew Gernreich’s life partner Oreste Pucciani, and worked for a time organizing Gernreich’s papers. These red vinyl cuffs were a remarkable donation—although they don’t look too special until someone with in-depth knowledge identifies them. Now missing their timepieces at center, the cuffs are related to Gernreich’s futuristic unisex statement and illustrations for LIFE magazine, published on January 9, 1970. Gernreich was widely quoted for his dramatic fashion pronouncements during the 1960s and 1970s. These attention-grabbing, political press releases were at times a collaborative effort between the designer and Pucciani. The two would converse about what to convey, and Pucciani (a brilliant philosopher, UCLA professor, and exceptional writer) aided in organizing the thoughts, then typed them up for Gernreich’s review and subsequent submission to the press. The sartorial concepts illustrated for LIFE were not intended for production, but LA gallery owner Eugenia Butler soon convinced the designer to stage an event and produce prototypes based on the sketches. The original model’s name is even handwritten on the interior red cuff above. 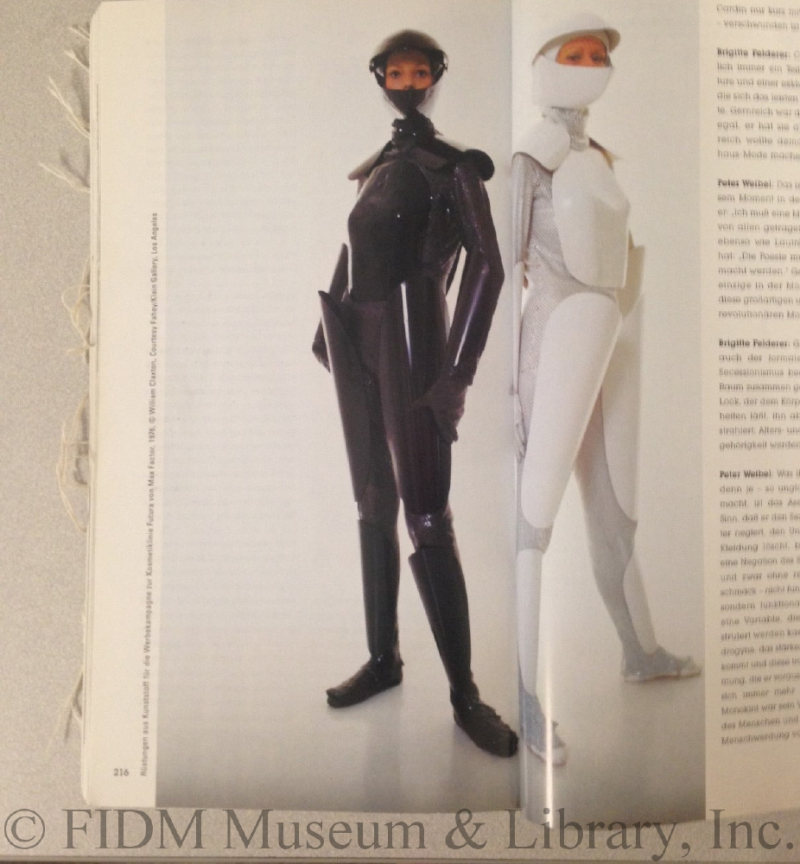 Once in a while, a donation takes your breath away. It was long thought that Rudi Gernreich’s custom-designed armor ensembles commissioned by cosmetics company Max Factor for their 1973-74 South American “Futuro” beauty campaign had been destroyed. The ensembles were intended to convey what women in the year 2000 would wear; they took into account females’ need for protection against an increasingly violent world. Two ensembles—one black, and one white—consisted of a full-body enameled aluminum mesh body suit, gloves, and hood. Added to this was a face-shielding helmet, as well as armor plates attached at the shoulders, chest, arms, and thighs. Not only were the looks utilized in a print and television campaign, they were also taken on an extensive promotional tour. 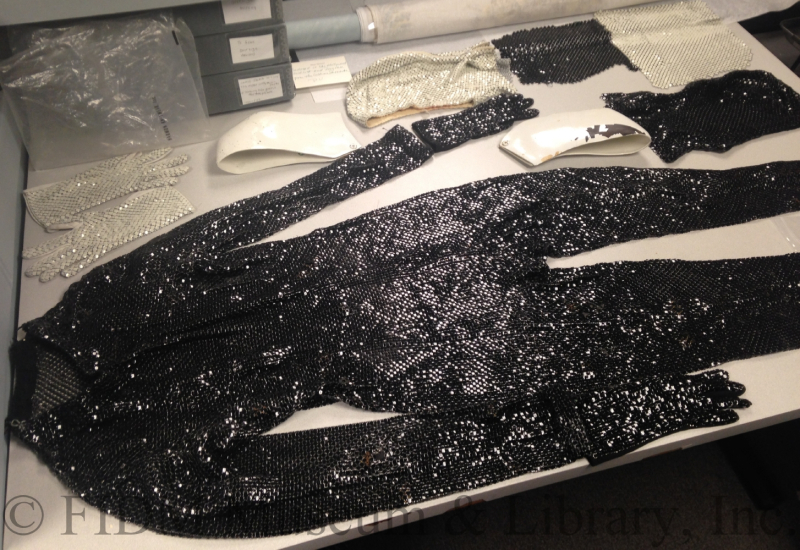 Everyone in the know thought the ensembles were thrown into a dumpster after the project. Apparently not! At the end of the Futuro tour, the Max Factor company sent them to one of the costume designers on the project for her rental business. The pieces were stored for years in the original shipping box until we recently received a call that a donor had some “weird” armor and chainmail along with other Gernreich items. I think you know what I was hoping for—and when I saw the vintage box stamped “Max Factor,” I knew! Inside, we found the complete black armor Futuro ensemble, carefully wrapped in tissue, plus, elements from the white version alongside, and even more Gernreich treasures (like the black and white gowns at the tail end of the film clip embedded above). It was an unforgettable day! 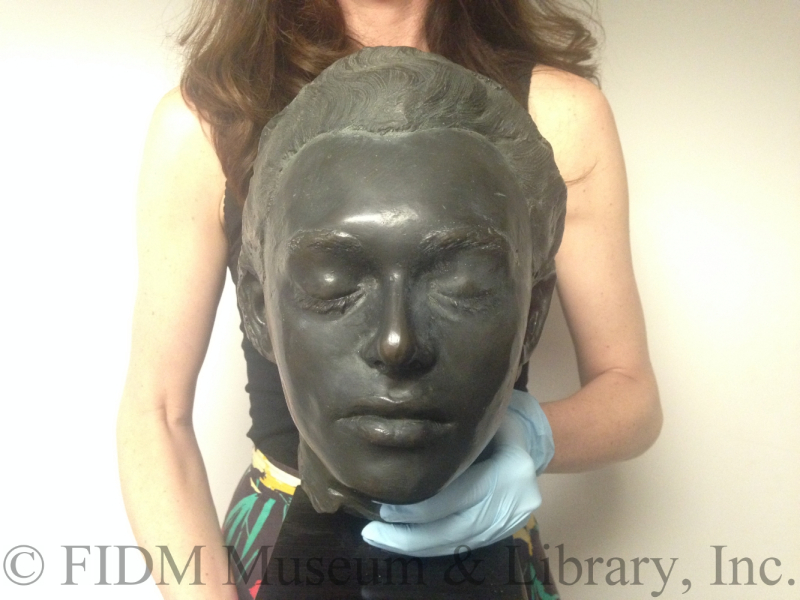 Rudi Gernreich left a close circle of friends after his untimely death in 1985. Oreste Pucciani commissioned a bronze face sculpture of the designer after his passing based on a life mask taken during young adulthood. Six of these striking sculptures were created, with Pucciani keeping one, and the remaining five given to people who were especially close to the designer. The original recipient donated this example to the FIDM Museum. When I saw it displayed on a pedestal in her home and took a closer look, I had the experience of being face-to-face with Gernreich for the first time after devoting years of study to him. The artwork is layered with meaning. It was originally intended as a memorial—a tangible token of a past friendship, holding memories for its owner that I’ll never fully know. Now, it’s an accessioned museum artifact with an official tag and a database entry. To me, the sculpture represents the joy I find in research and rediscovery. It’s also a reminder of my commitment to ethical curating and personal integrity. And because of this, for now, it’s being carefully stored on a shelf in my office, where it keeps me company on what has already been a memorable journey.