Today’s blog post is written by Donald and Joan Damask Summer Study Grant recipient Kirstin Purtich, who is currently studying fashion and textile conservation at the Fashion Institute of Technology. After completing an MA in decorative arts, design history, and material culture at the Bard Graduate Center and spending several years organizing and contributing to exhibitions, Kirstin is getting back to fashion history research—and is happy to be working directly with objects again. This fall she is pursuing several conservation treatment projects, one of which will become the basis for her qualifying paper at FIT.

Over the course of eight weeks this summer, my main task at the FIDM Museum was to survey and photograph over 500 garments in the Permanent Collection stored in boxes. This included knitwear by Betsey Johnson, heavily beaded gowns by Norman Norell, and multi-garment ensembles by nineteenth-century dressmakers—anything too delicate to be stored hanging. Dressing the less vulnerable garments on a standard dress form was key to understanding their three-dimensional form, and I became intimately acquainted with the complicated closures of haute couture gowns. One turquoise Christian Dior evening dress, designed by Marc Bohan and made for Betsy Bloomingdale, employs no less than 3 rows of snaps and hooks and eyes to close multiple, tissue-thin layers of silk chiffon and charmeuse at the center back.

During my internship, I also encountered a number of familiar names in twentieth-century American sportswear, which happens to be one of the museum’s collecting strengths. Coming across a number of garments by the San Francisco-based firm Koret of California, I found a wealth of information still affixed to the clothes. While most objects are categorized in the museum’s “labeled” section because of a surviving designer’s or manufacturer’s label at the back neck or side waist, most of the Koret garments also feature original retail hang tags and labels printed with style numbers, which provide direct insight into the way they were marketed and sold. These objects speak not only to trends in color and silhouette from the 1940s to the 1970s, but also to the ways in which women have been expected to consume and care for their clothes. 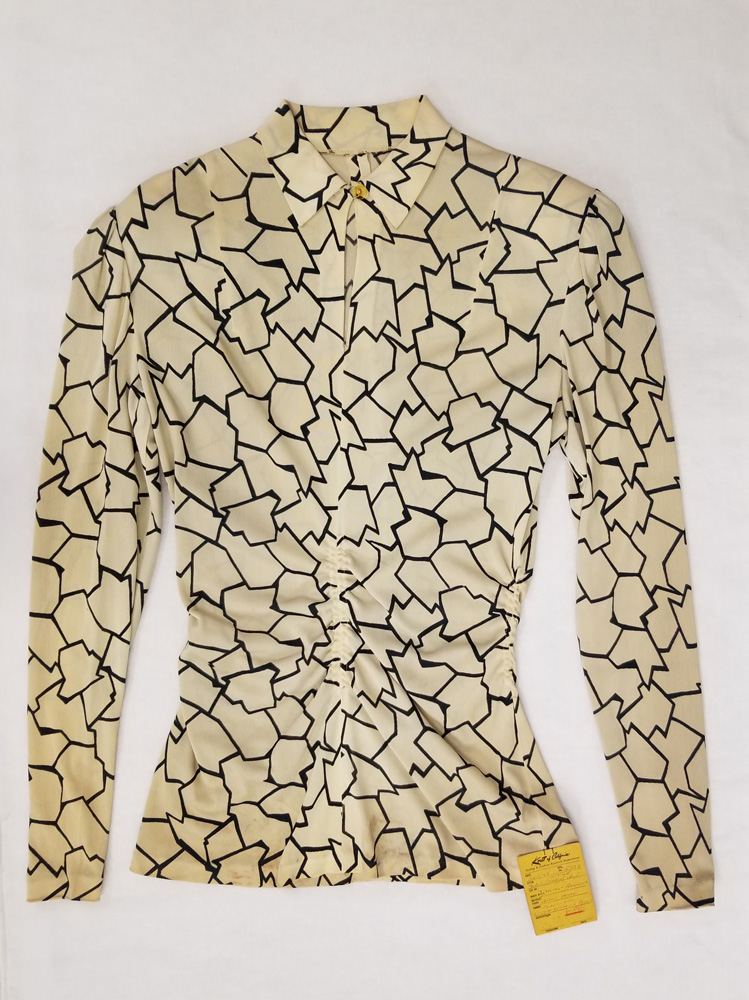 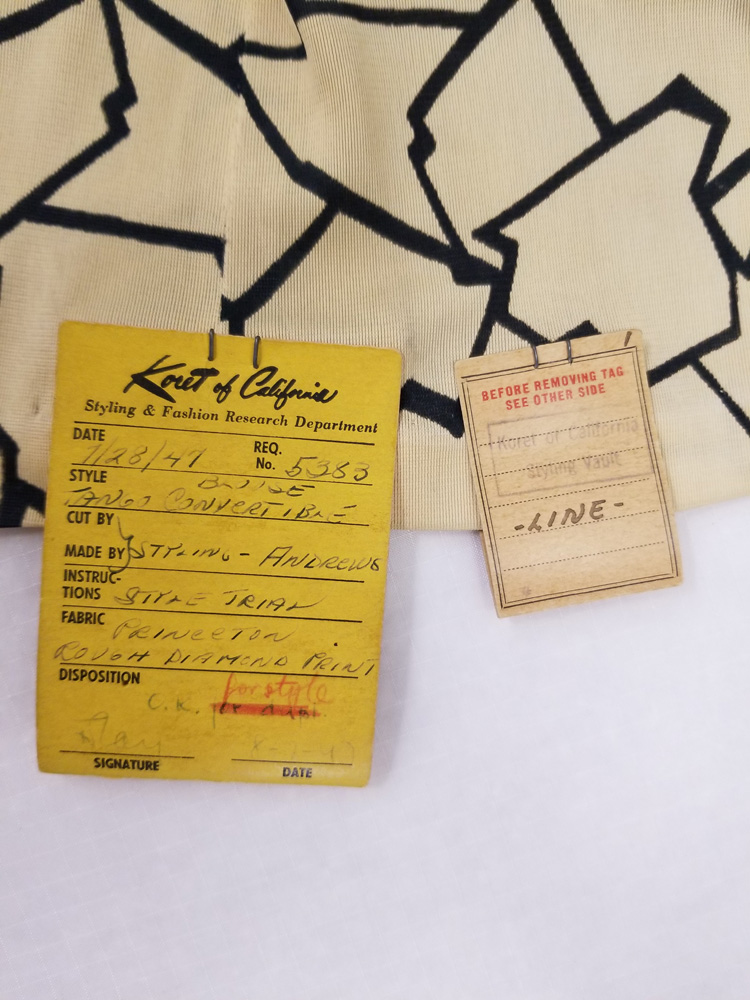 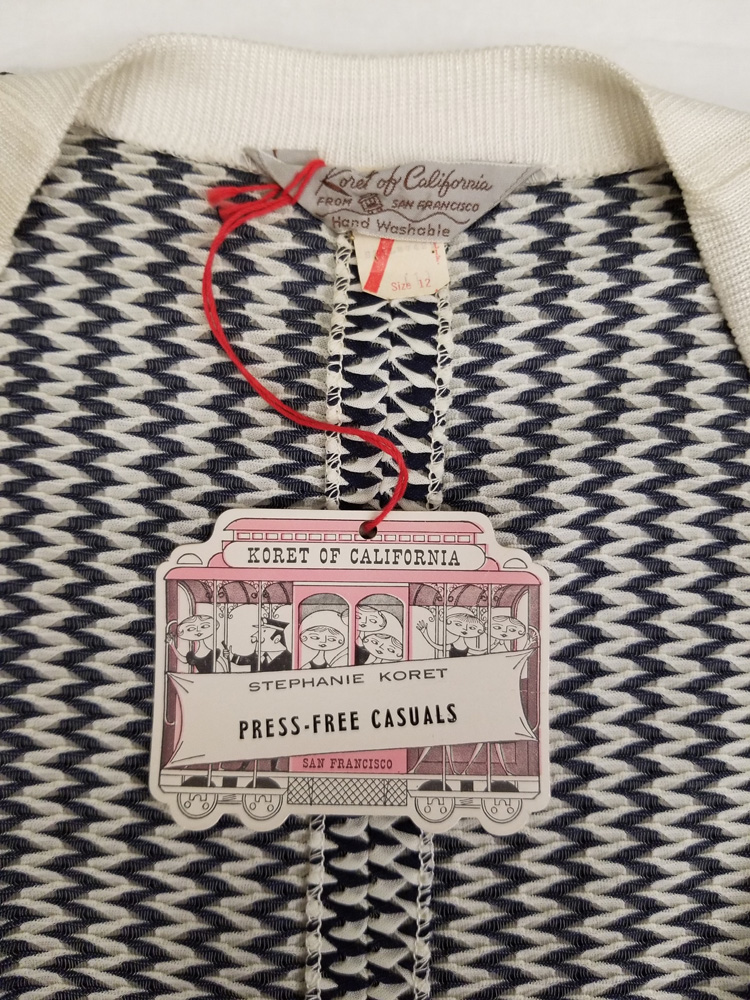 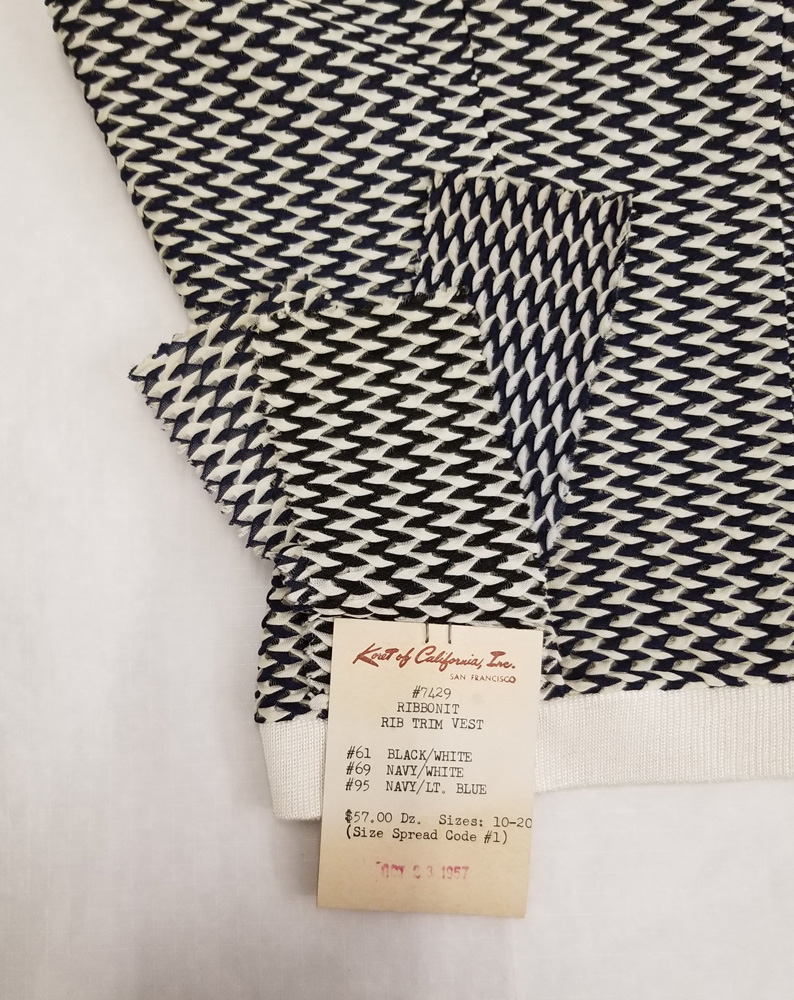 In total, the FIDM Museum collection houses twenty women’s garments by Koret, which range in date from the late 1940s to the mid-1970s. Founded in 1938 by designer Stephanie Koret and her husband Joseph, a sweater salesman, the company began as a maker of coordinated women’s separates; in the wake of World War II, Koret became one of the key manufacturers in San Francisco’s newly established “Apparel City” industrial park.[1] Tags and labels on the FIDM Museum garments trace the evolution of Koret’s brand identity, which often incorporated the image of a San Francisco cable car, while cardstock labels stapled to some garment hems identify the existence of a “Styling Vault” for employees’ reference. With the growth of designer archives today, it is impressive that Koret invested in a record of their ready-to-wear models as early as 1947.

When Koret divested the contents of the Styling Vault in 1991, the FIDM Museum became a beneficiary of this once-internal initiative. As one of the FIDM Museum staff explained, “I was especially pleased to find items that had tags citing date, fiber or fabric information, price point, and, in some cases, samples of other colors and prints available. Our collection is enriched by the Koret additions in that they represent ‘everyday clothes’ of a particular period. Students learn pattern and draping techniques and styling ideas as well as lifestyle information by studying garments of a period.”[2] While these garments continue to serve as teaching aids for current FIDM students—especially those that have since been transferred to the school’s study collections in Los Angeles and San Francisco—the garments’ value as material records of fashion history was already recognized nearly thirty years ago. 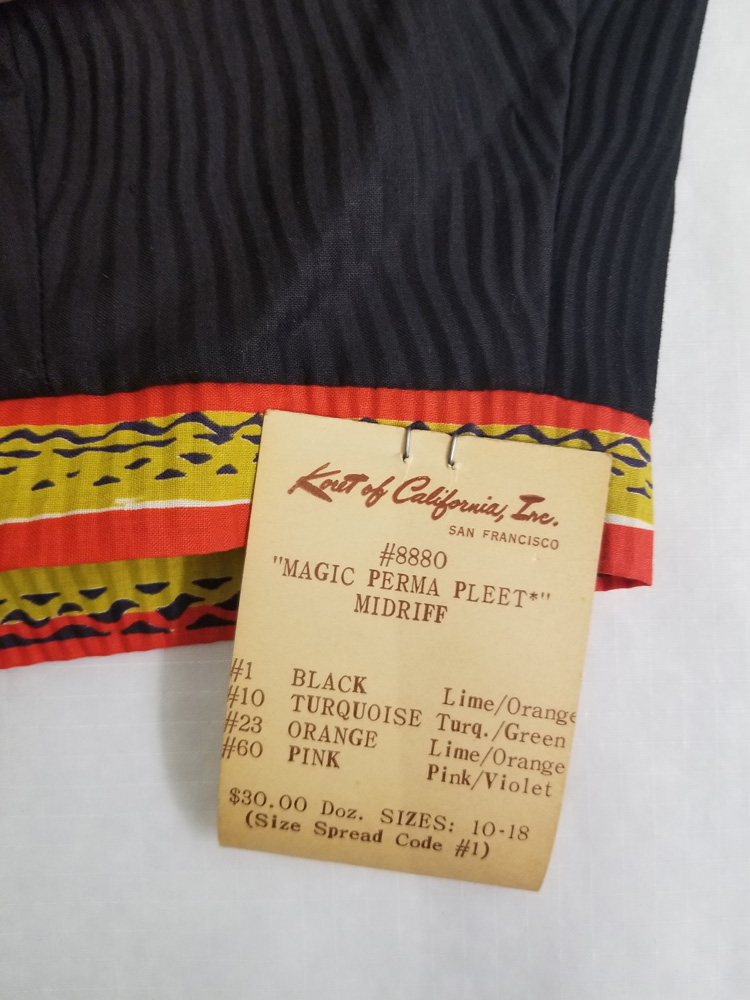 One of the overarching trends these garments illustrate is a growing demand in the mid-twentieth century for ease and clarity in clothing care. In fact, Koret had been founded on this very principle, beginning with Stephanie Koret’s innovative “Trikskirt,” with topstitched pleats, and her later “Pleetskirt,” with steam-set pleats guaranteed to stay in place through laundering for six months—or for life with regular pressing.[3] Koret’s target customers were members of the burgeoning postwar middle class, and the company guaranteed washfastness in their affordable, casual separates. As head designer, Stephanie Koret was committed to working with trusted textile manufacturers like Crown Fabrics, which made the textured “Magic Perma Pleet” fabric seen above, and the company’s marketing copy spoke directly to consumers. A pair of printed cotton shorts, for example, was sold with a paper “Wash ‘n’ Wear” certificate for the patented Koraset finishing process, which eliminated the need to iron the shorts after washing and drying by machine. 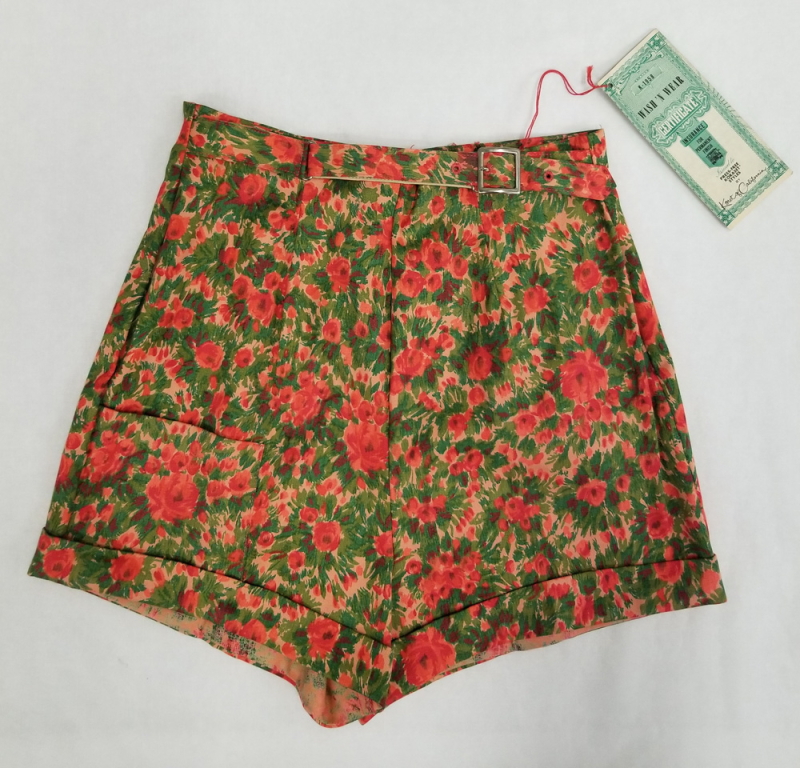 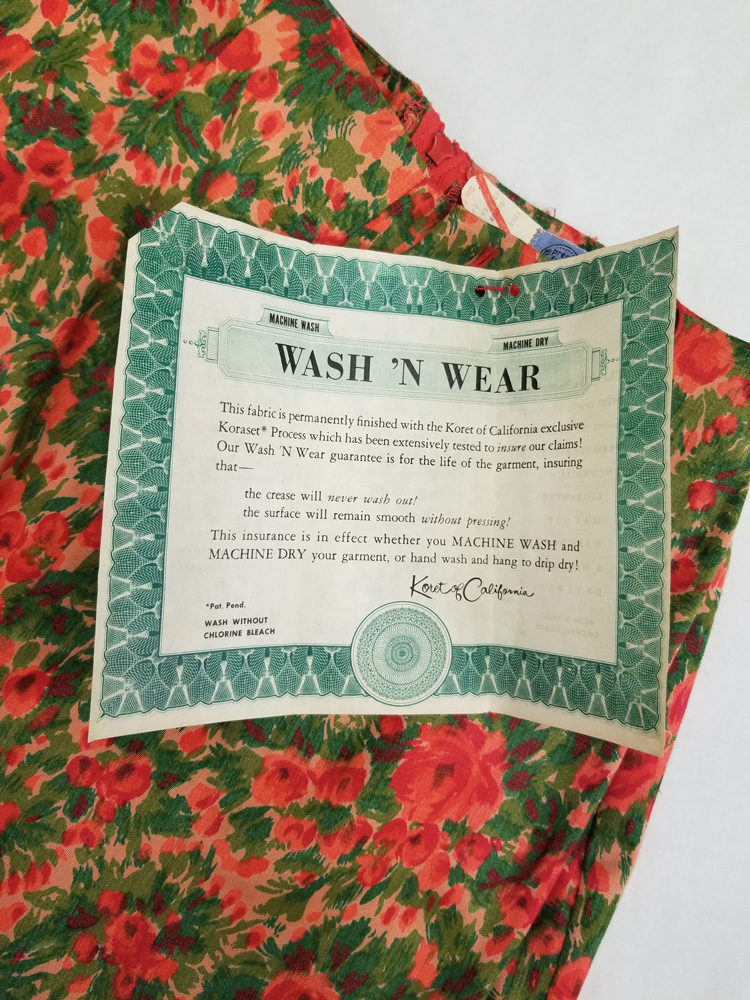 The company even partnered explicitly with the detergent brand Woolite, which had been introduced to the American market in 1953 by the Honey Harbour Company.[4] While the earliest advertisements for Woolite recommended the cold water detergent exclusively for wool garments, soon the product was being promoted for all types of synthetic fibers that previously required hand washing.[5] By the late 1960s the company had adopted the slogan “Woolite safely soaks more than just sweaters clean.”[6] Manmade, trademarked fibers like the Antron nylon used in the dress above or the Dacron polyester used in the suit below could be engineered for desirable qualities, but garment manufacturers were also keen to teach their customers how to keep these new miracle materials clean without stretching, shrinking, or fading. Judging by the common advice on care labels to “Wash in Woolite,” the detergent company’s cooperation with firms like Koret had become mutually advantageous.[7] It is worth noting that because the garments in the FIDM Museum collection are mostly deadstock, and were never worn or washed, there is no observable proof of Koret’s or Woolite’s claims of durability! 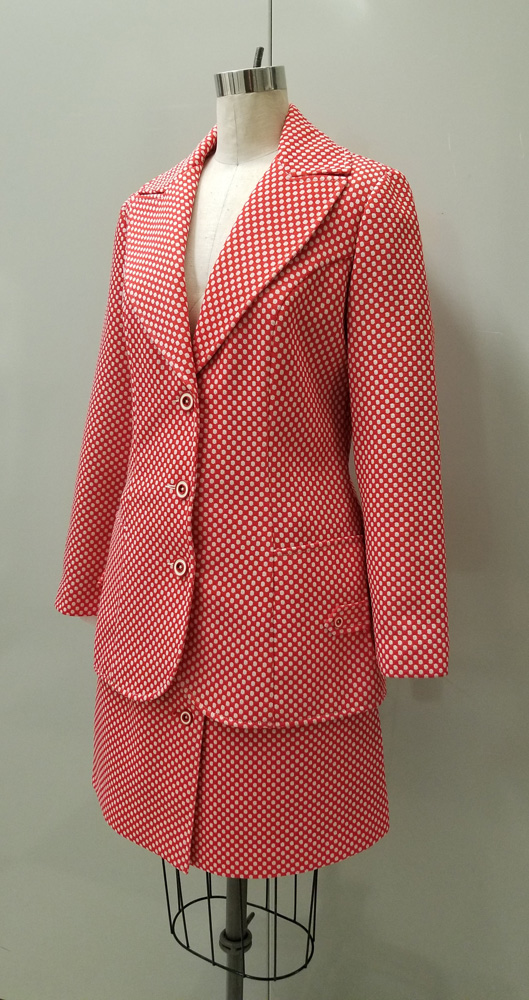 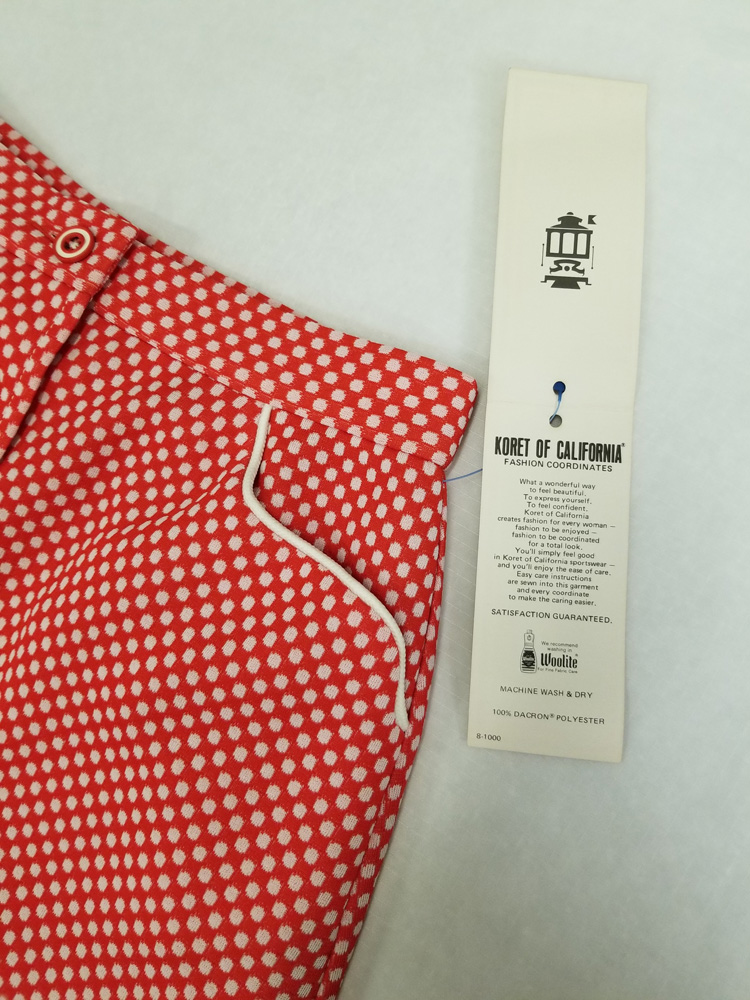 While it was a family connection that initially drew me to the museum’s Koret holdings—my aunt worked as a sales representative for the company from 1979 to 1987, alongside some of the same employees who arranged Koret’s 1991 gift to FIDM—I found that these objects serve as a reminder of how both the FIDM Museum’s collection and fashion studies have evolved and expanded over the past few decades to address “everyday clothes.” The Koret garments and the tags they bear reflect broader developments in mid-range, ready-to-wear clothing, and ultimately they prove how closely fashion is tied to social, economic, and technological history.

[6] See, for example, an advertisement in Good Housekeeping, September 1969.

[7] These labels are seen in the Koret suit garments shown here and are noted in a Woolite advertisement in Cosmopolitan, March 1971.