Associate Curator Christina Johnson writes about the extraordinary Duvelleroy fans in the FIDM Museum Collection. The Fan Association of North America (FANA) generously supported the archival display of select fans in this blog for FANtasy: The Mona Lee Nesseth Fan Collection at the FIDM Museum. 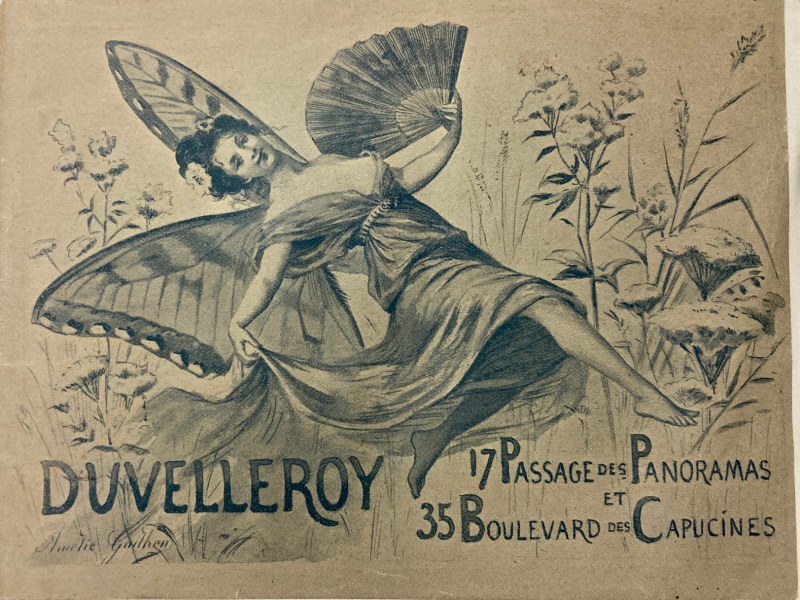 By the late nineteenth century, the Parisian house of Duvelleroy was one of the most renowned fan purveyors in the western world. Éventailliste (fan maker) Jean-Pierre Duvelleroy (1802-1889) founded his company in 1827.[1] Not only did Duvelleroy oversee the artistry of his namesake designs, he also patented important elements of their manufacture, such as an improved pleating mold and innovative hardware. Duvelleroy matched artistic and mechanical inclinations with keen business acumen, planning workshop space and boutiques to support an ample profit. By 1845, his workshops were located at 17, Passage des Panoramas, a well-known shopping arcade, and his boutique opened at 15, Rue de la Paix. The Paris-based house would change addresses over the years, but boutiques were always located near the latest tony shopping areas, such as the Boulevard des Capucines and Boulevard de la Madeleine in Paris. 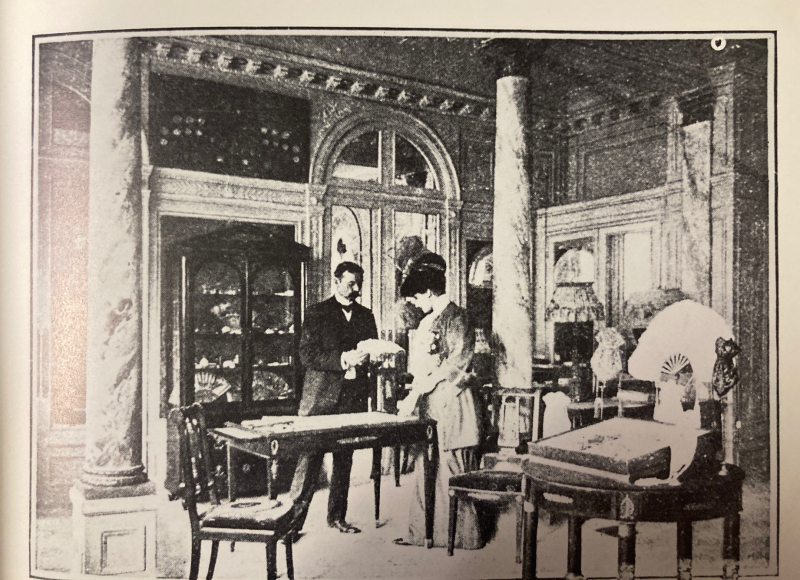 Sons Jules (1839-unknown) and Georges (1856-1930) worked for their father and continued the family business after his passing in 1889. The London branch of the house opened in 1861 and was overseen by Jules. Meanwhile, Georges was responsible for the continuation of the French workshops and boutiques, which expanded beyond Paris to the resort towns of Nice and Deauville by the early twentieth century.  Duvelleroy fans were advertised in their yearly catalogs and shipped around the globe. Newspapers and magazine advertisements proclaimed: “For Birthday, Presents, Weddings–The largest and most artistic collection in the world. Fans sent on approval and made to match dresses.”[2] Georges Duvelleroy successfully expanded the company’s offerings from the latest hand fan designs to custom orders, specialty purses, opera glasses, and antique fans. What follows are highlights from the FIDM Museum’s Duvelleroy collection. 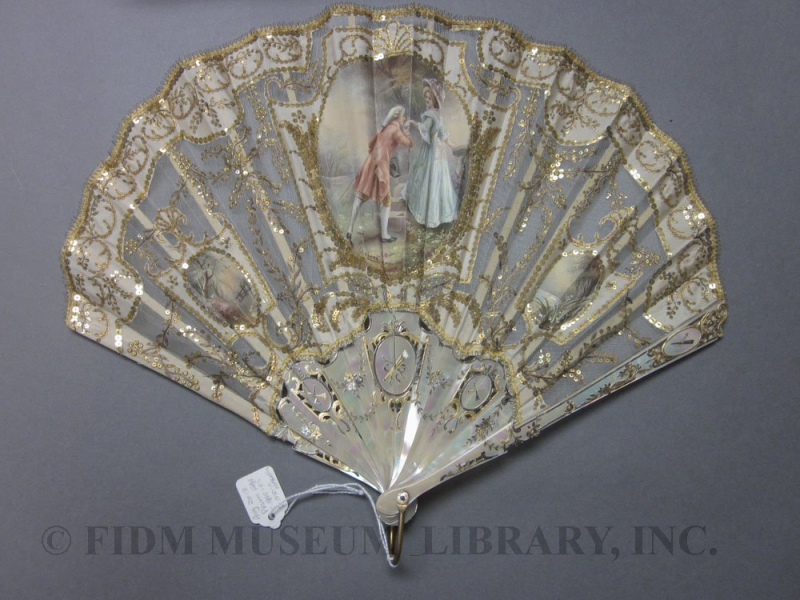 A shopping guide included an entry for the famed Duvelleroy establishment in 1897:

“We are reminded of the high reputation enjoyed by Duvelleroy…. His pretty shop is an artistic study of all that is newest in Parisian fans, and of the best that has been handed down to us from days of old. M. Duvelleroy has fans to suit all purses, inexpensive as well as costly, all possessed of the cachet of perfect taste.”[3]

Both Jean-Pierre and Georges had abiding interests in eighteenth-century fan artistry. Father maintained a collection of prints and engravings, while son continued to amass an important collection of antique fans. These items from the “days of old” were often used as revivalist design inspiration, as seen in this example featuring carved mother-of-pearl sticks and a hand-painted courting couple dressed in styles similar to the 1780s (but note the lady’s hat and hairstyle are spot-on c. 1903!). Similar to embellishments decorating eighteenth-century evening attire, metal sequins stamped in circular, leaf, and star shapes were sewn onto the leaf by hand. 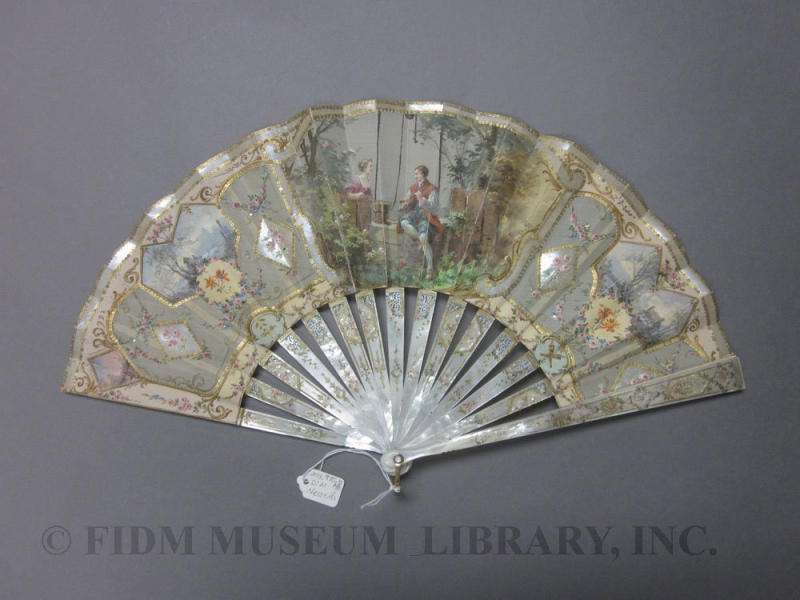 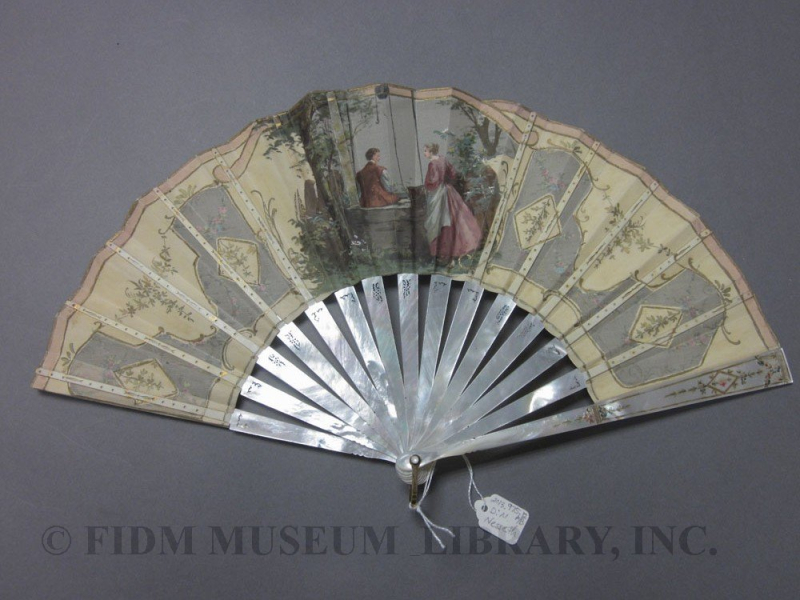 Another example of the Duvelleroy interest in antique styles is seen in a flirting couple wearing seventeenth-century inspired attire. This pastel-hued fan exhibits a more intricate design than the example above, and is even decorated on the reverse. Carved sticks showcase a great deal of over-painting and gilding. It likely cost more than the previous fan, in keeping with the firm’s apparent ability to “suit all purses.” In a Duvelleroy catalog dating to the turn of the twentieth century, Rococo-style fans like this ranged in price from 20 to 500 francs. 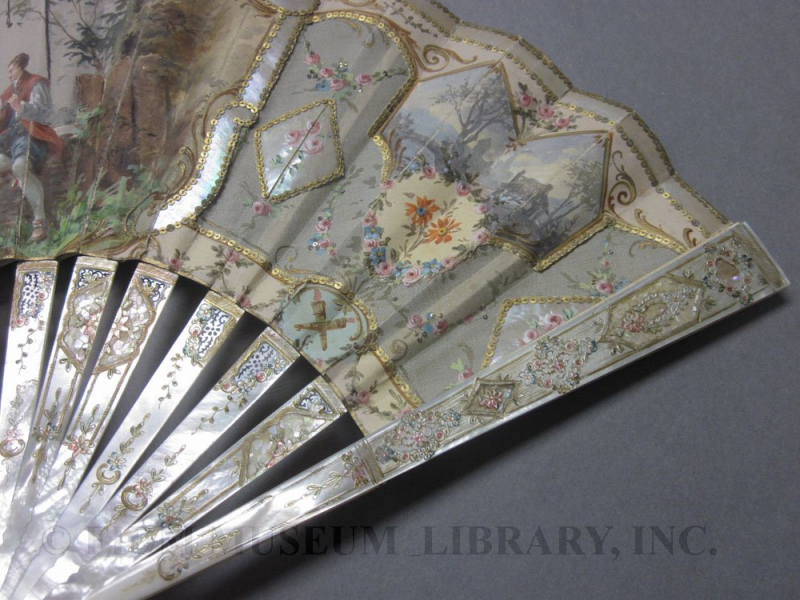 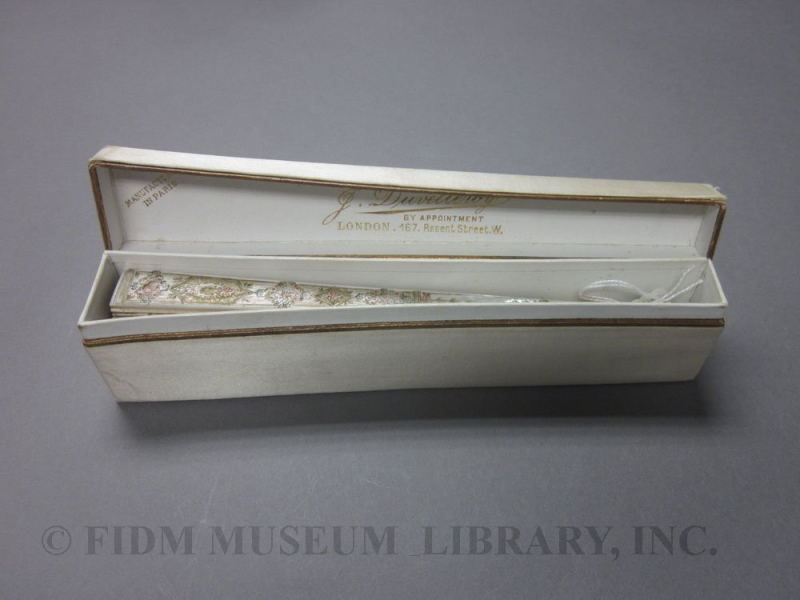 In addition to intricate carving and sequins, thin sheets of mother-of-pearl were adhered to the leaf and painted in a florid style similar to eighteenth-century interior boiserie (decorative wooden paneling). The original storage box highlights that this particular fan was sold by the London depot. In 1900, one British editorial noted: “no daintier gift can be imagined than a delicately painted and beautifully mounted fan, and no daintier fan-shop exists in Europe than that of M. Duvelleroy in our own Regent Street, No 167.”[4] The box is made of cardboard stamped with a faux leather surface and has gilt highlights. An even higher-end fan would be placed in a custom-made satin or leather box with an interior padded silk cushion for it to rest on. 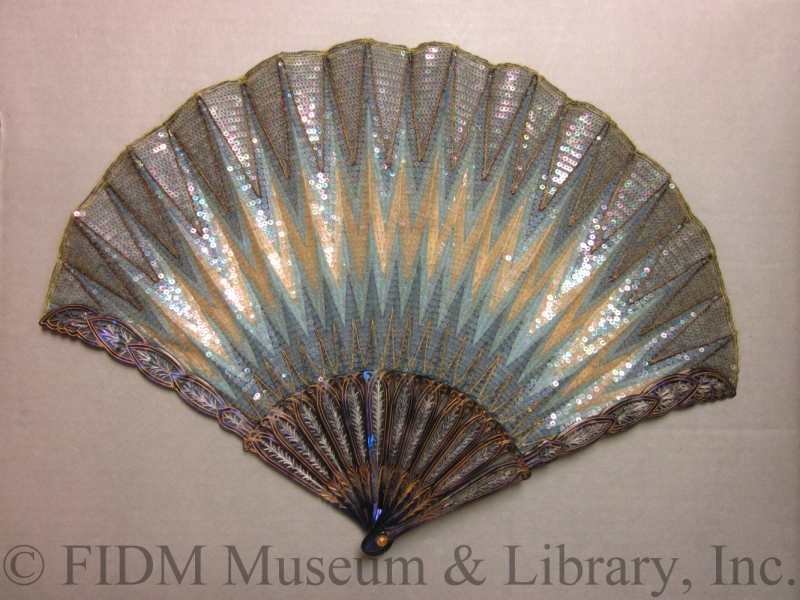 This model features a striking painted and ombré sequined zigzag design that Duvelleroy titled “Point de Hongrie” (Hungarian stitch, sometimes called flame stitch) after a type of decorative pattern seen in the seventeenth and eighteenth centuries. For example, in Point de Hongrie parquet flooring, narrow wooden planks are arranged in the same zigzag pattern, creating a mitered effect. The well-known motif was also used extensively in woolen embroidery throughout Western Europe and the United States, such as for chair covers, curtains, and fashion accessories. 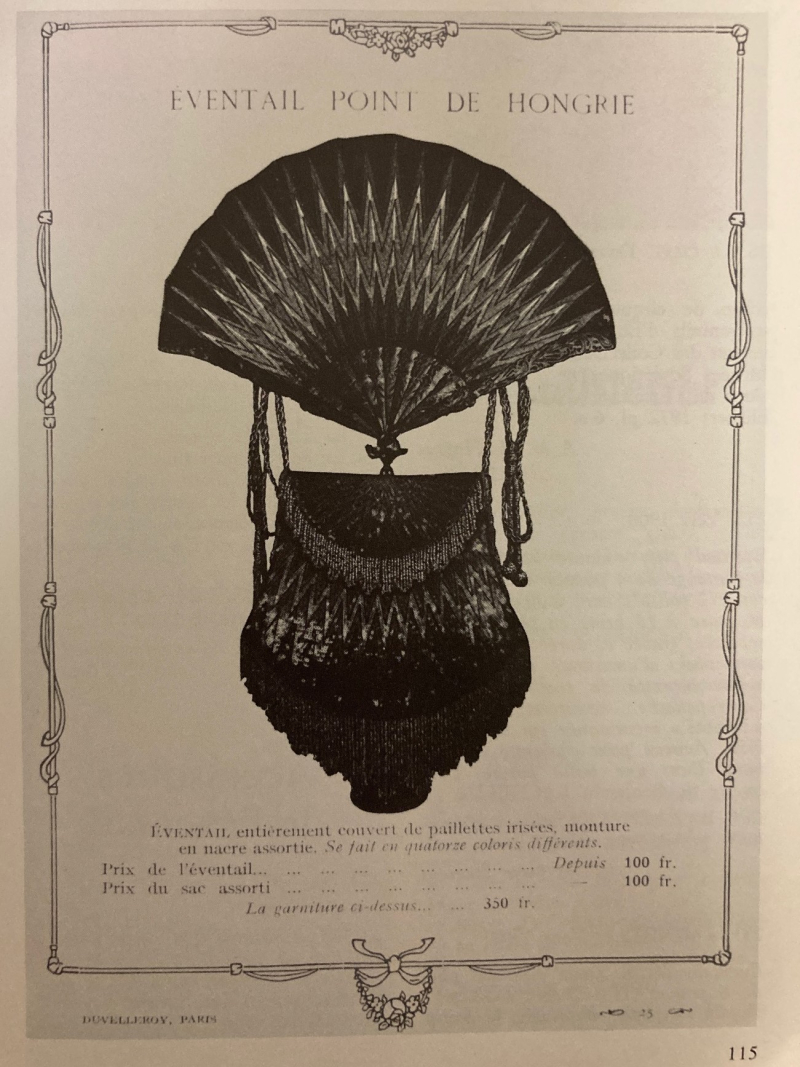 An early twentieth-century Duvelleroy catalog page shows this fan was available in various colorways (extant evidence seen here!) and, that it had a matching evening purse. The RISD Museum collection contains a fully sequined bag with a similar motif and colorway, possibly an offering from Duvelleroy. Petite purses such as this were designed to match both fan and gown designs, and constructed for the fans to fit safely inside. 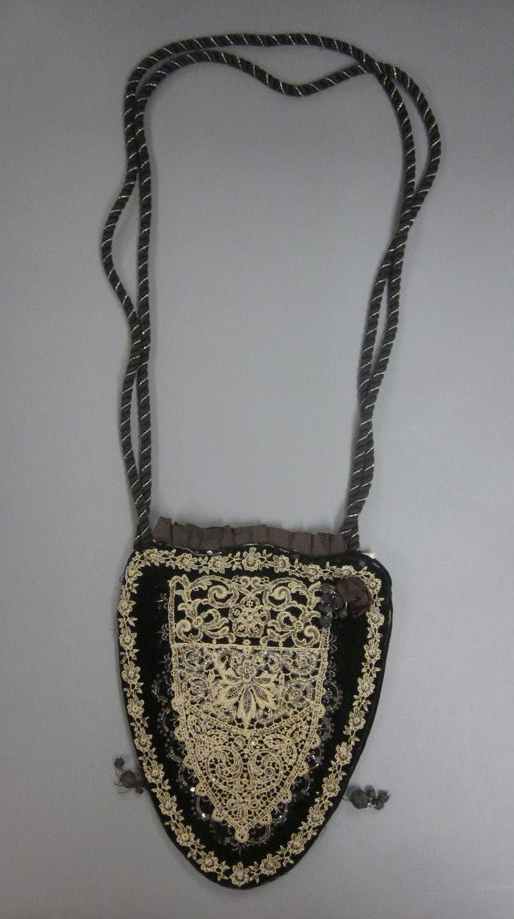 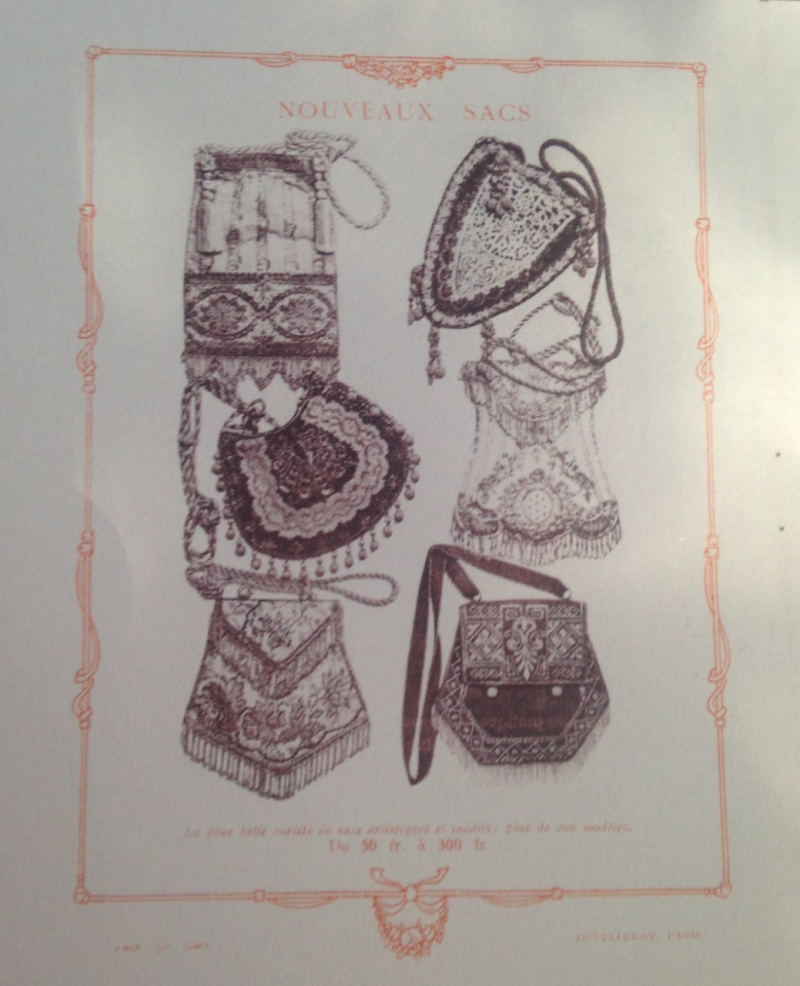 The shoulder bag style purse above is not labeled, but it was indeed sold by Duvelleroy, as it appears in their 1914 catalogue (top right), along with other high-end purses. It features thick silk cording wound with metallic thread, as well as a pouch appliquéd with ecru lace, tassels, and beading referencing Renaissance revival design. Some of the purses sold by Duvelleroy were made to hold a fan around the wrist during formal events, while others, like this one, were for more general use. 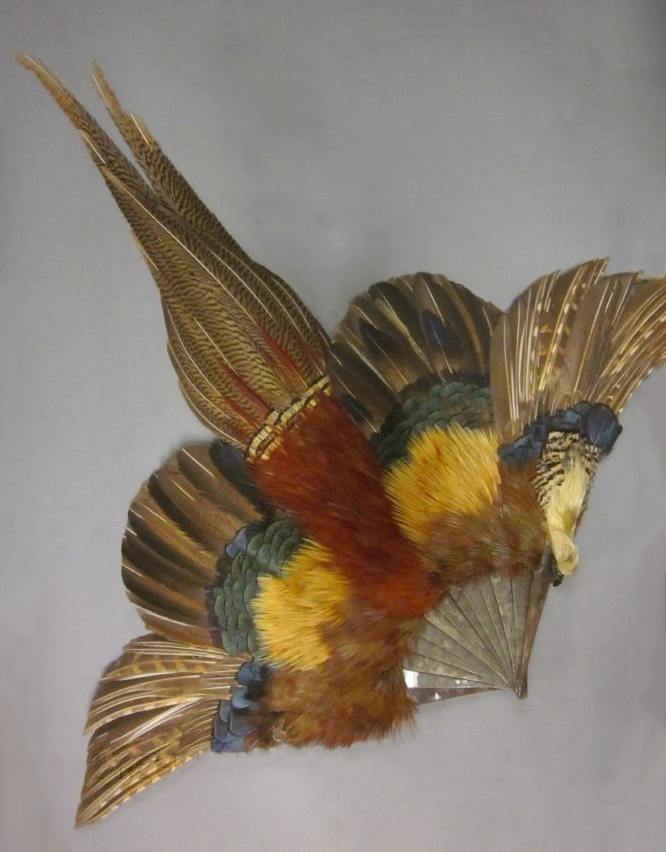 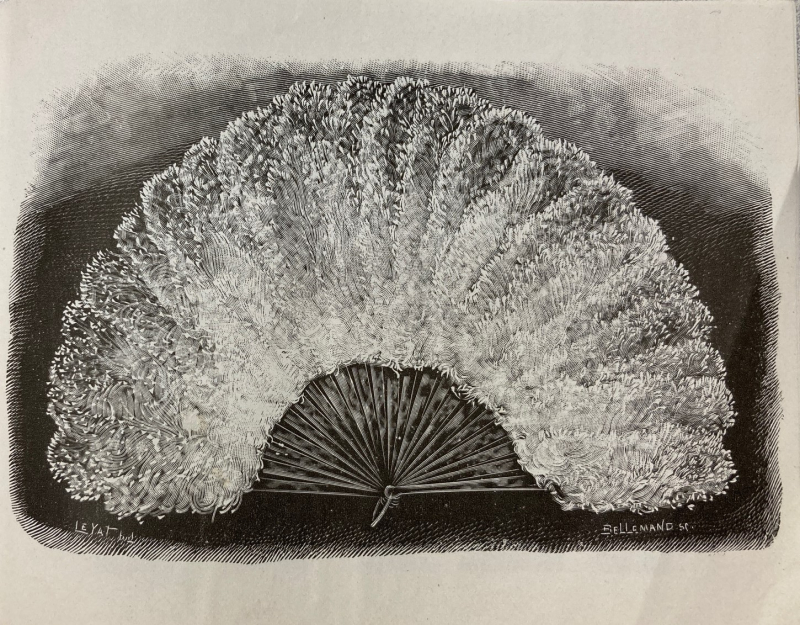 This is an example of Duvelleroy’s famous feather fans. The feather arrangement does not come from the body of a single bird. Instead, multiple feathers—plucked from the pheasant, peacock, and fancy chicken, to name a few—were combined in the creative mind of the designer to fashion a new avian creation, along with a pastiche head (with glass eye and beak) at the right side, covered with canary-yellow feathers. Statement feather fans were available in single feather options, as well. The Duvelleroy catalog from 1903 features ostrich feather fans with prices ranging from 60 to 500 francs, depending on feather quality and treatment, as well as the guards and sticks. 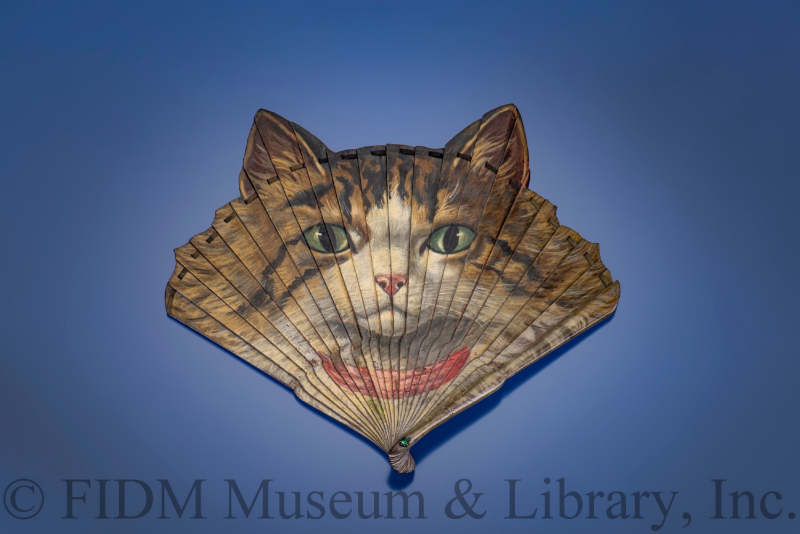 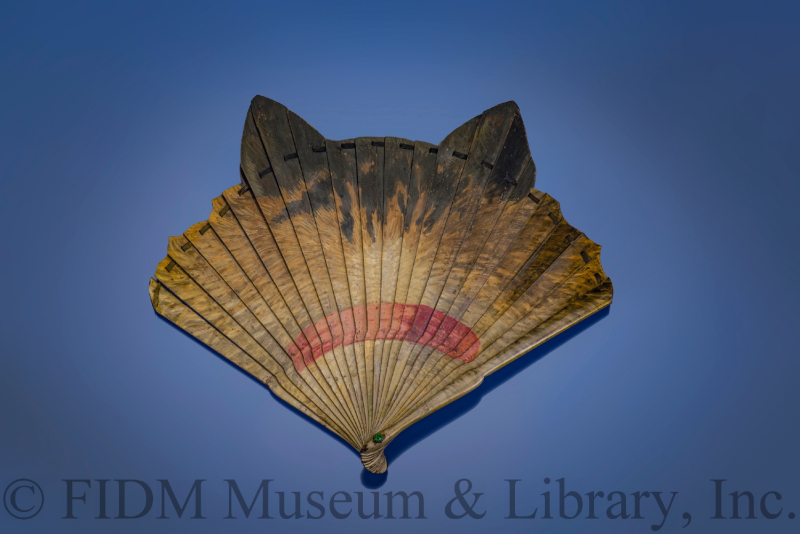 Duvelleroy was famous for a menagerie of stylish animal fans painted by Adolphe Thomasse and his workshop (1850-1930) during the late nineteenth and early twentieth centuries. Cats and dogs, peacocks, monkeys, and rabbits all made their way into the Duvelleroy stock. Some creatures were included on traditional pleated fans, while others were cut out along the edges to the exact shape of the animal’s charming face. Although delicate fans like this (which measures fewer than six inches across) were termed “elegant toys”[5] by the press, they were not mean to be handled by children. Instead, they were created as refined novelties for grown ladies, who might choose to display a collection in a boudoir or sitting area as conversation pieces. 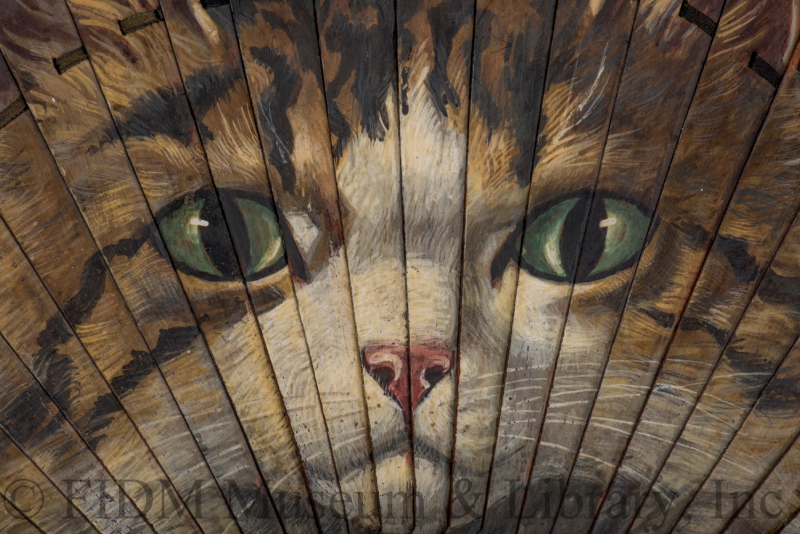 [1] Much of the historic research on the House of Duvelleroy in this blog post derives from: Marie-Clémence Barbé-Conti, Duvelleroy: Treasures of the Parisian Couture Handfan. Paris: In Fine Editions, 2019.  The FIDM Museum’s painted “Chien” (dog) fan appears in the publication on page 99.