We are one week away from the presidential election – have you made your plan to vote? Whether it’s early or on election day, in-person or by mail, we have the perfect garment to encourage your sense of civic duty: a 1980s linen shirtdress printed with the words of the United States constitution. Surprisingly, this tribute to American democracy was designed by a Frenchman, Jean-Charles de Castelbajac (b. 1949). Known for irreverent, whimsical designs, Castelbajac’s fascination with the United States is clear in his frequent use of Americana throughout his fifty plus years in the fashion industry. 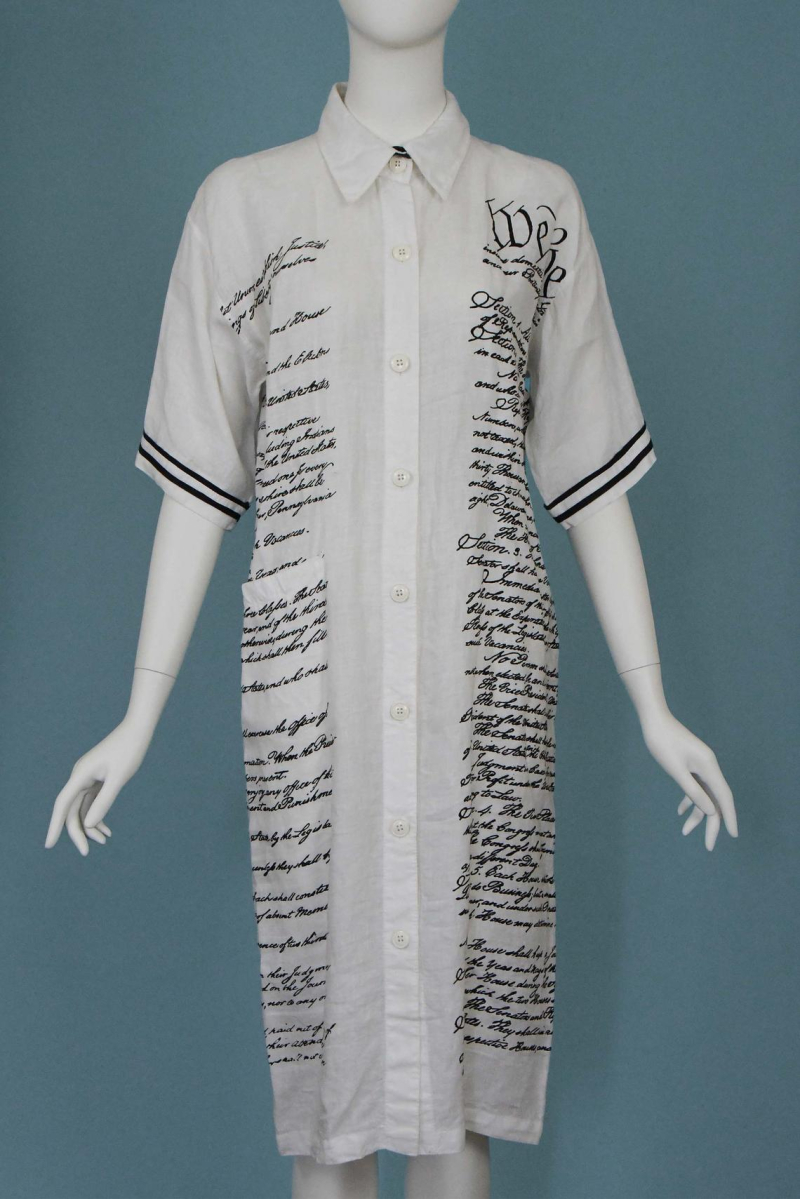 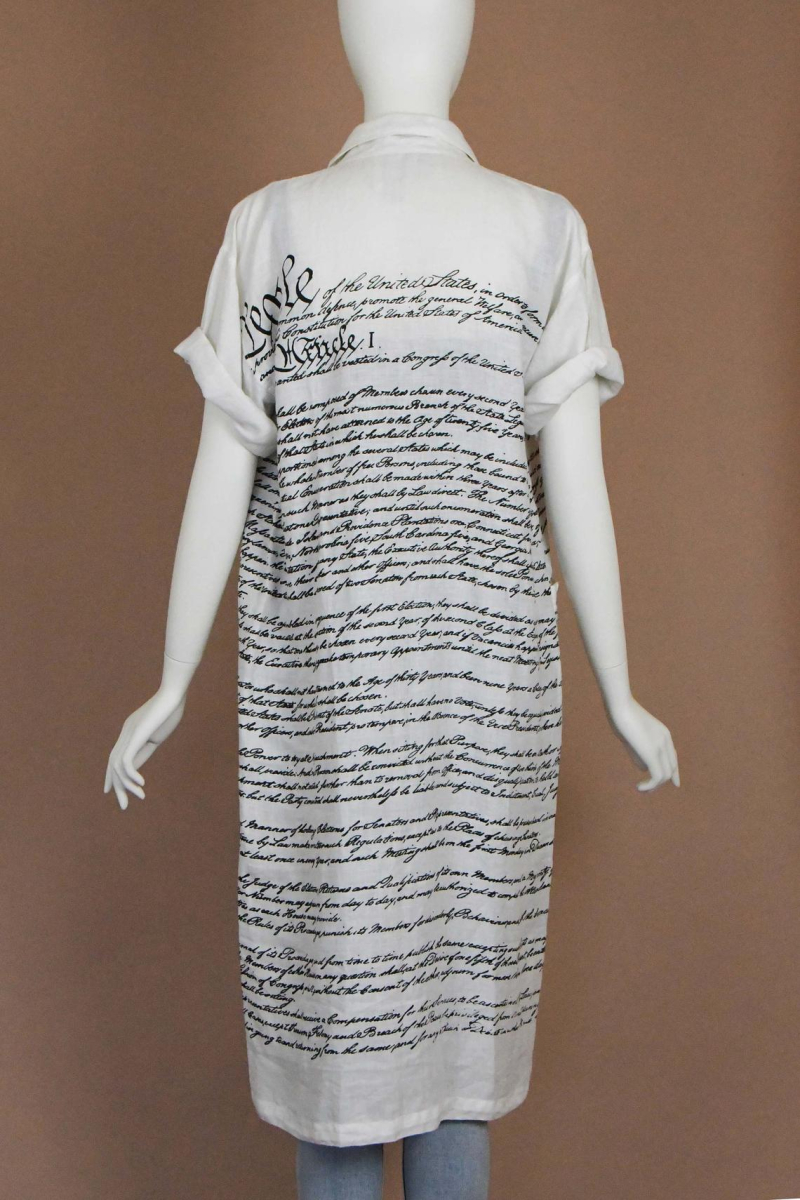 Castelbajac’s aristocratic family has deep roots in France and a long history of military service – his ancestors were said to have fought alongside Joan of Arc![1] Jean-Charles, like his musician father before him, opted for a life devoted to the arts instead. He was introduced to fashion through his mother’s tailoring company in Limoges; from this workshop, he and his mother created his first company, Ko & Co. After moving to Paris in 1968, Castelbajac apprenticed for Pierre d’Alby, and later became part of the Créateurs et Industriels, a group of young ready-to-wear designers that included Issey Miyake, Jean-Paul Gaultier, Emmanuelle Khanh, and Thierry Mugler.[2] In addition to establishing his eponymous house in 1978, Castelbajac has worked as head designer for Max Mara and Courrèges; he is currently the artistic director of the United Colors of Bennetton.

The designer found major success in the early 1970s when he created an oversized wool coat made from his old boarding school blanket – a look that combined comfort, nostalgia, and a touch of eccentricity. The style became a signature, and kicked off a grand tradition of mixing unusual materials with high fashion. He favors natural textiles like wool and linen, and is well-known for his use of figurative objects such as plush dolls (Snoopy, Kermit the Frog, and teddy bears). Following in the footsteps of Surrealist fashion designers like Elsa Schiaparelli – see his collection celebrating Man Ray – Castelbajac always incorporates his lifelong love of contemporary art into his designs. He was once a noted collector of Neo-Expressionist pieces; now, he concentrates on creating his own artwork. He frequently collaborated with artists on his fashion show announcements, and later invited them to hand-paint his dresses. Robert Mapplethorpe, Jean-Charles Blais, Robert Malaval, Deborah Tuberville, and Keith Haring were part of Castelbajac’s inner circle, and contributed to his reputation as an artist first, designer second. 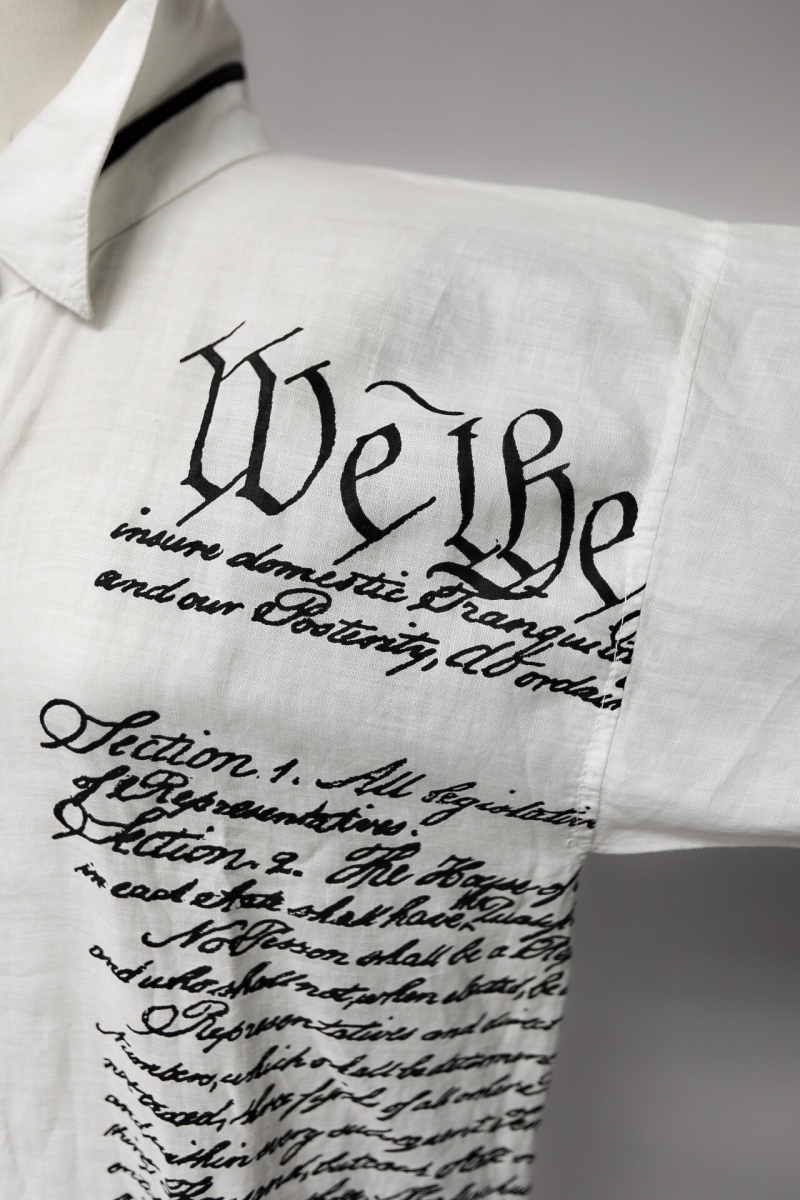 Pop art is an important fixture in Castelbajac’s work, a medium that naturally lends itself to subverting American iconography. There is a laundry list of instantly-recognizable American cultural references used in Castelbajac's fashions: Mickey Mouse, Felix the Cat, Looney Tunes, Muppets, Campbell’s soup (an ode to Andy Warhol), Spider-Man, John and Jacqueline Kennedy, U.S. Navy and Army uniforms, Coca-Cola, Lucky Strike, Jimmy Stewart, John Wayne, South Park, President Obama, the American flag, and dollar bills have all appeared on Castelbajac’s runways. Certainly the collections contain a great deal of whimsy and camp, yet his admiration for this country, and the inspiration he derives from it, is genuine. In a 1986 interview, Castelbajac recognized the importance of the United States to his design ethos: “When I first visited the U.S., it was a shock to see the energy of the American people, it matched the concept I had of active fashion. I felt an immediate connection with companies that to me represented America’s roots…What I try to do is combine my European roots and elegance with American energy.”[3] 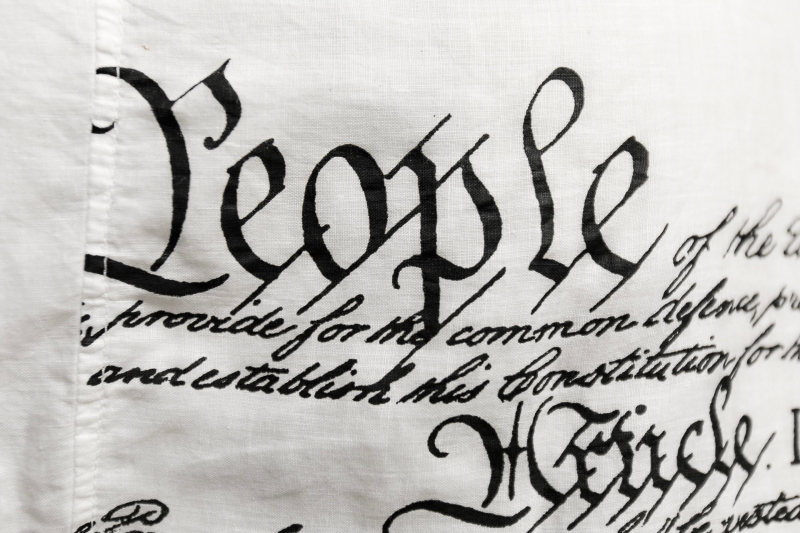 The constitution shirtdress – a new acquisition in the FIDM Museum collection, just in time for the 2020 election – fits the Castelbajac aesthetic: linen fabric, boxy silhouette, printed text (another favorite motif), and a nod to American culture. The dress was engineered based on the surface design of the textile; the text wraps from front to back on one panel, interrupted only by the sleeves. The style of the Castelbajac label indicates it was made in the 1980s, though an exact collection year has yet to be determined. Perhaps it was designed in honor of Castelbajac’s participation in the July 1986 “France Salutes New York” festival, a ten-day program in Manhattan honoring the historic cultural ties between New York and Paris, featuring music, dance, film, art, and fashion.[4] Castelbajac was among the seventeen French designers that participated in the “La Mode in Liberte” fashion show at Lincoln Center.[5] His presence at the festival was well deserved, as there could be no one better suited to celebrate the cross-cultural ties between French and American artists. Castelbajac himself declared, "I’m astonished at the connection between my clothes and this country.”[6] 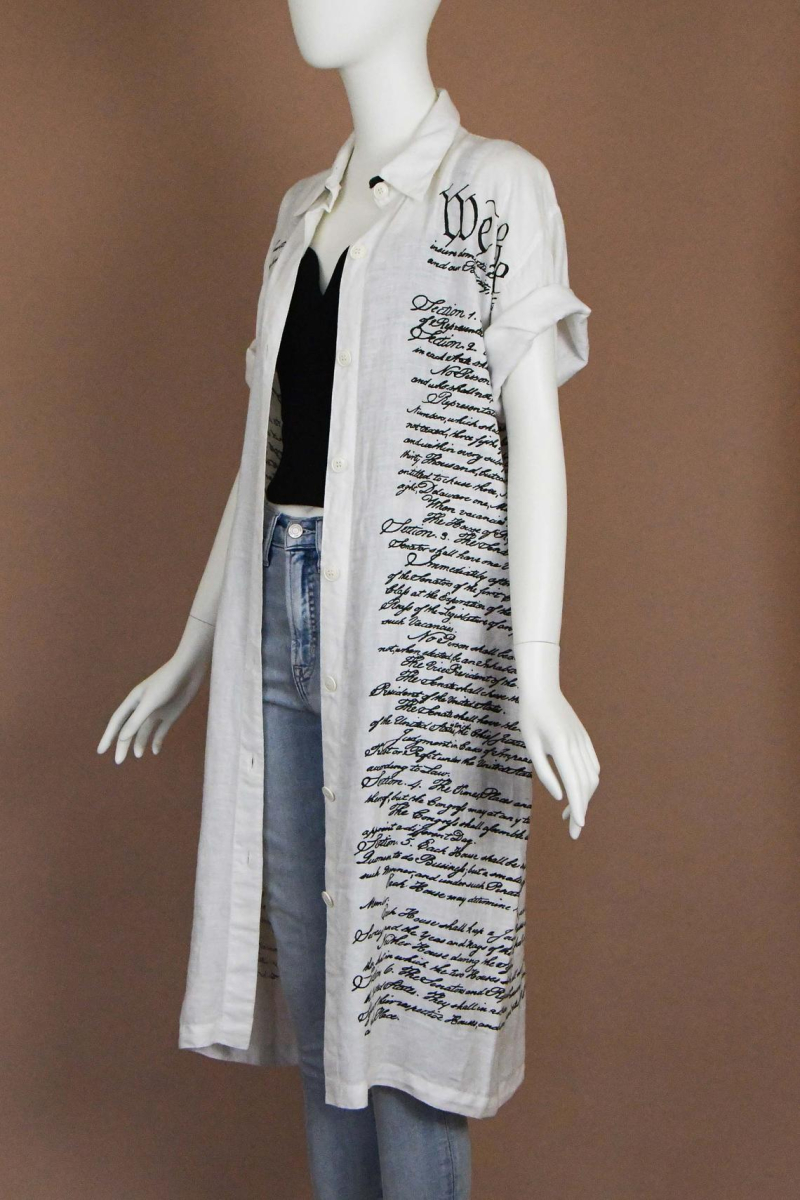