Associate Curator Christina Johnson shares her research on the career of Leon Bennett, a milliner whose name appears in several Rudi Gernreich headpieces in the FIDM Museum collection. In the first of this two-part series, learn how Christina navigates historical primary sources to answer questions about Bennett’s collaboration with Gernreich. 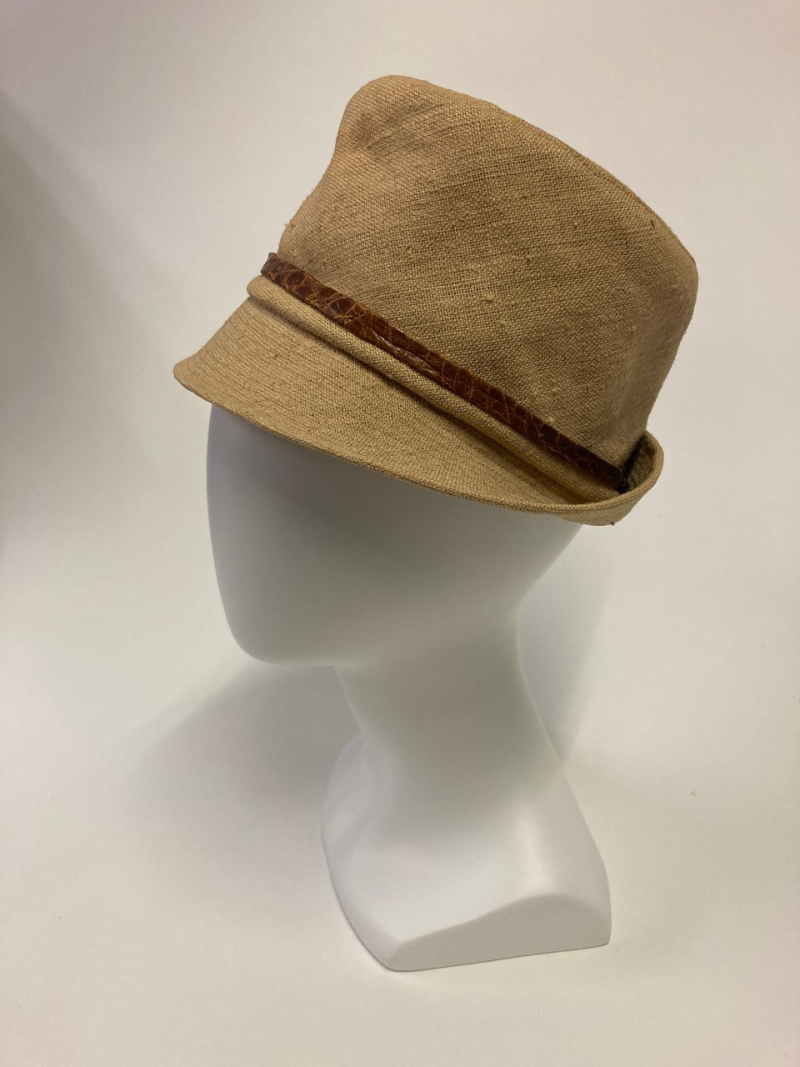 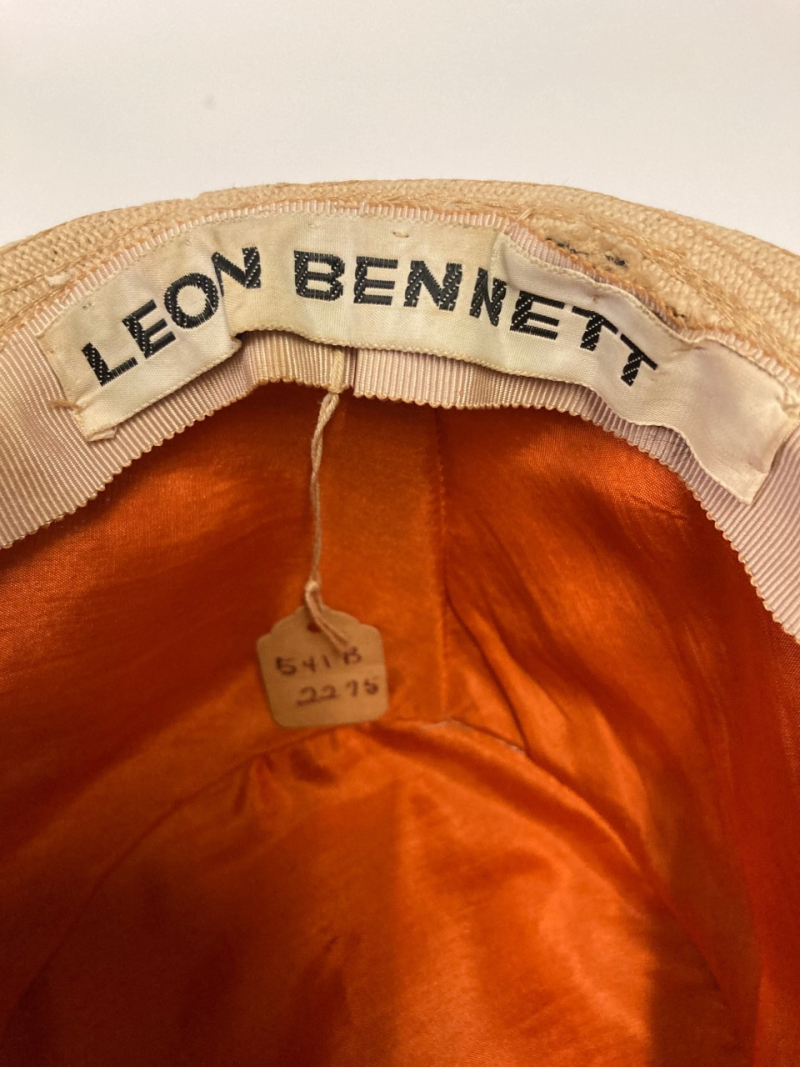 Going through objects in the FIDM Museum’s Rudi Gernreich Archive a few years ago, I came across a group of headwear labeled “Leon Bennett.” I hadn’t heard of the designer. Based on the styles, I thought the hats dated to the 1960s. Who was Leon Bennett? The more I research the modern commercial fashion industry, the more I understand that successful designers always surround themselves with talented co-creators. It’s my intention to broaden our fashion history narrative to celebrate these important contributors, too.

Revisiting the questions more recently, a preliminary online search for Bennett didn’t uncover much. But an obituary for a Leon Bennett (with a connection to hat design!) popped up in Variety published June 12, 2001. It had to be him:

“Leon Bennett, who worked for many years as a hat designer, dresser and a ‘Man Friday’ for actors such as Milton Berle, Jerry Lewis and Sherman Hemsley, died June 2 of natural causes at a retirement home in Los Angeles. He was 85. A longtime member of Motion Pictures Costumers Local 705, he began his career as an actor.”

An online image search for the phrase “Leon Bennett Rudi Gernreich” included a selection of photos of Barbra Streisand wearing Bennett headwear with Gernreich garments in 1964.[i] Were these hats commissioned by Gernreich to coordinate with his ensembles, or did they derive from Bennett’s on-hand stock? Could Gernreich have even designed clothing around Bennett’s millinery concepts? Where was Bennett’s place in Gernreich’s design timeline, and what was his role in the Gernreich brand? These questions are part of my on-going research focused on Rudi Gernreich and his world. 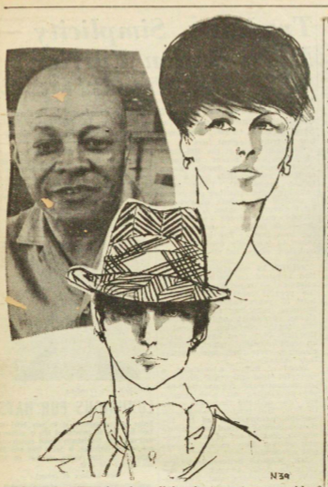 To start answering my questions, I logged onto digitized magazine databases and began searching. Women’s Wear Daily didn’t let me down. On August 6, 1963, editor Sylvia Sheppard detailed Bennett’s latest wholesale millinery venture. Her article offered a fascinating introduction to his life. To paraphrase: at that time, Bennett “designed the hats for Gernreich’s collection,” sold a custom line at Henri Bendel, and even had his own shop on Rodeo Drive. He also was involved in creating headwear for the Hollywood film and television industries. I noticed there was a photograph of Bennett in the article alongside illustrations of his designs.[ii] 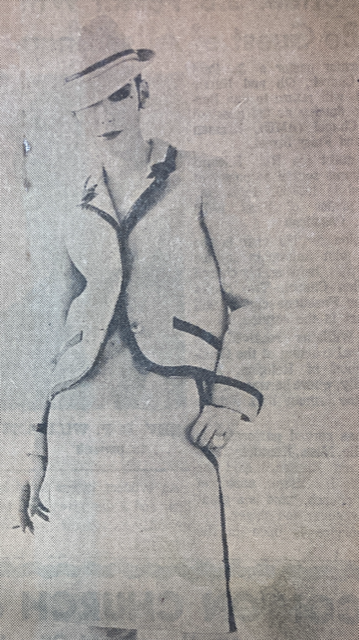 Another early fashion industry mention of Bennett was in a newspaper editorial showcasing Gernreich’s Spring 1964 styles published in January of that year. The caption credits Bennett with a hemp fedora trimmed in crocodile. As seen above, it matches Gerrneich’s croc-trimmed suit. Going from the hat illustrations surrounding his portrait in the earlier WWD article, this mannish look was a style Bennett was already known for. Is it possible Gernreich designed a suit around one of Bennett’s hat concepts? After all, sturdy hemp fabric and leather trim are materials more conducive to millinery needs than suiting traditions. This ensemble at least necessitated collaboration between the two designers. Gernreich’s company would have purchased material for the suits and headwear together since so much of it would be needed for store orders. 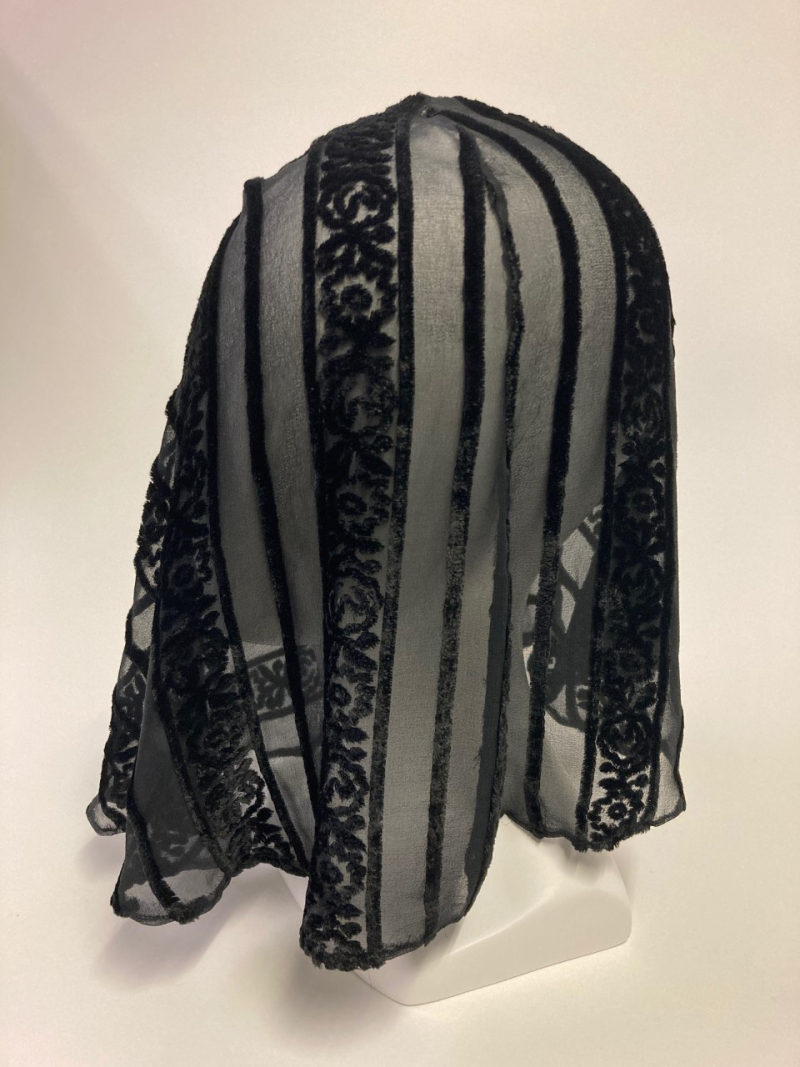 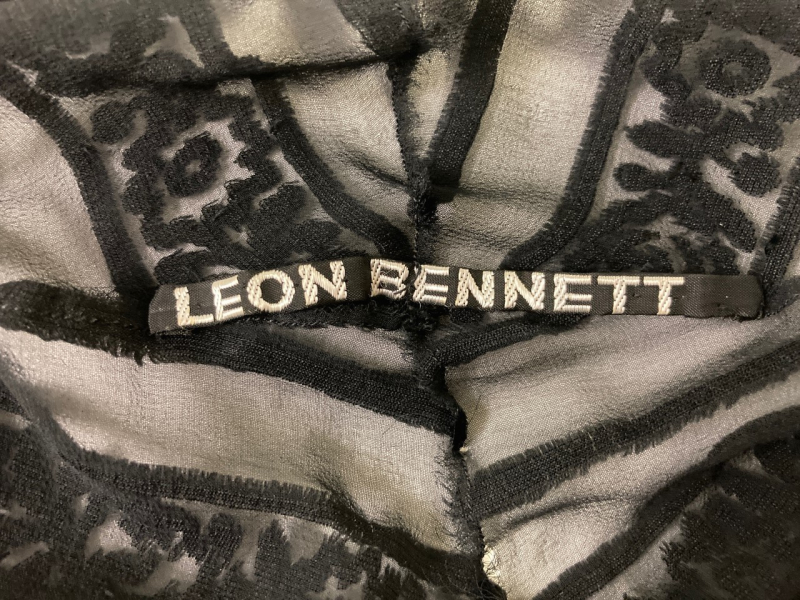 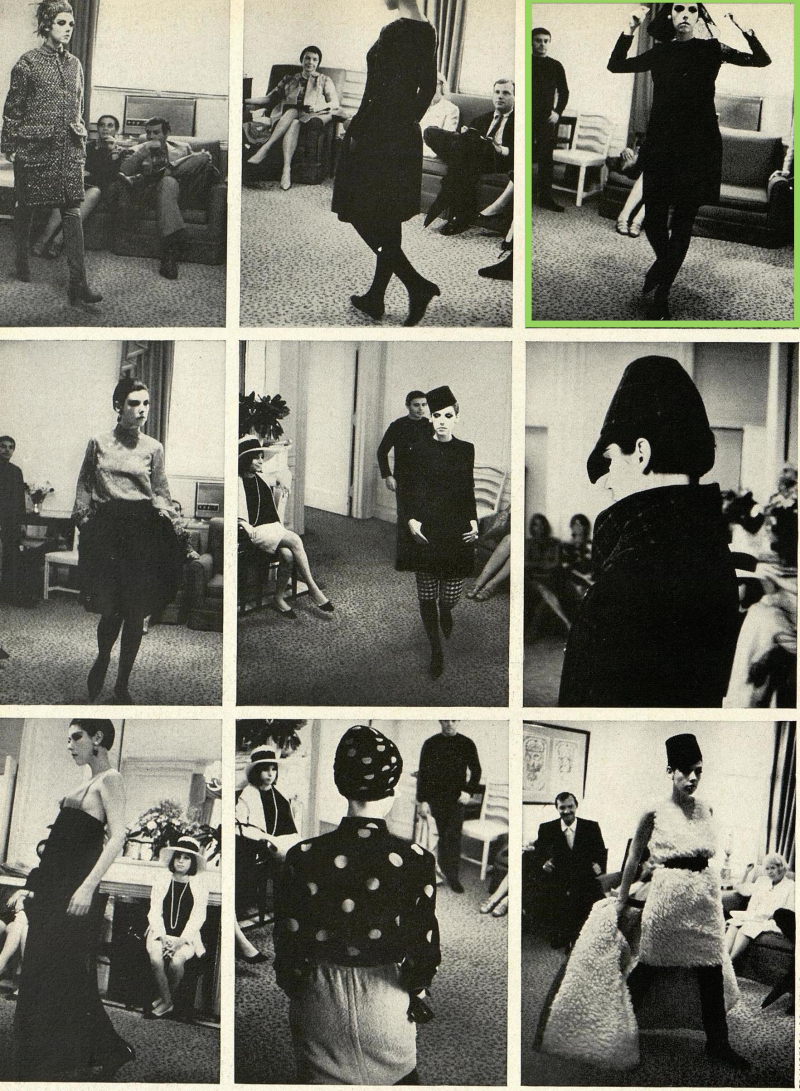 Bennett also created a series of diaphanous head coverings for Gernreich’s Fall 1964 line. The sheer drapes are labeled “Leon Bennett” and made of fabric that matches Gernreich dresses. These unique accessories were likely only worn for fashion showings or editorial styling; I haven’t seen examples for sale in period advertisements (or in today’s vintage market!). One example can be seen in the fashion presentation photographed in Harper’s Bazaar, above (top right square highlighted green). In this instance, Bennett was credited by Bazaar for all of Gerneich’s hats for the season. 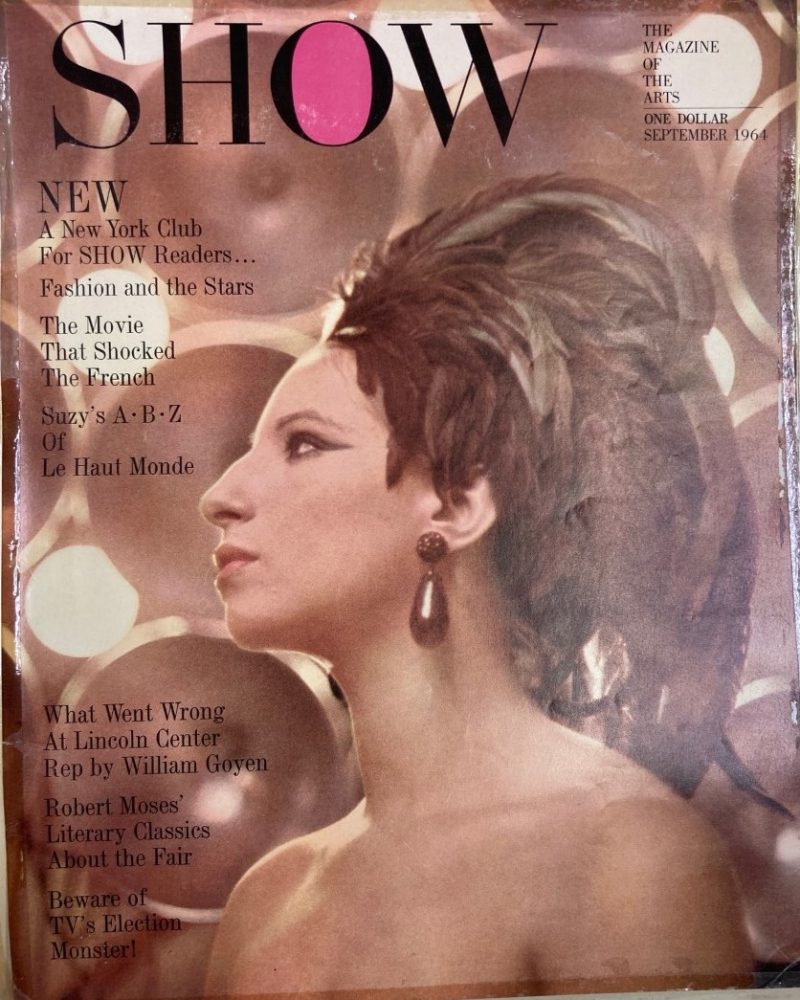 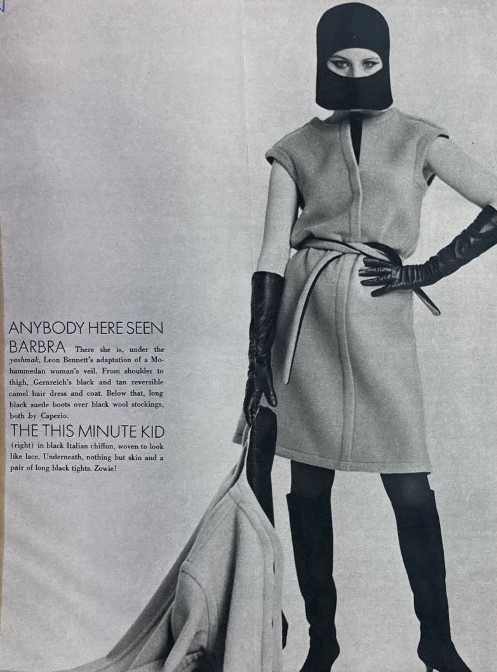 I decided to revisit the images of Barbra Streisand I found online earlier. Published in Show magazine in September 1964, she wears Gernreich with Bennett hats, as noted in the captions. The cover features Streisand in an iridescent black feather headdress by Bennett.[iii] Inside, she wears four looks from Gernreich’s Fall  line, including a reversible wool coat ensemble paired with a face-shielding hat that garnered Bennett a huge amount of press.[iv] This helmet-like accessory made its way into other magazines in addition to numerous newspaper fashion features.[v] For example, Sports Illustrated cites a somewhat shortened version with a rectangular eye vent as a chic example of what to wear to a football game, noting it was “a spectator helmet designed by Leon Bennett to go with Rudi Gernreich’s futuristic fashions.”[vi] 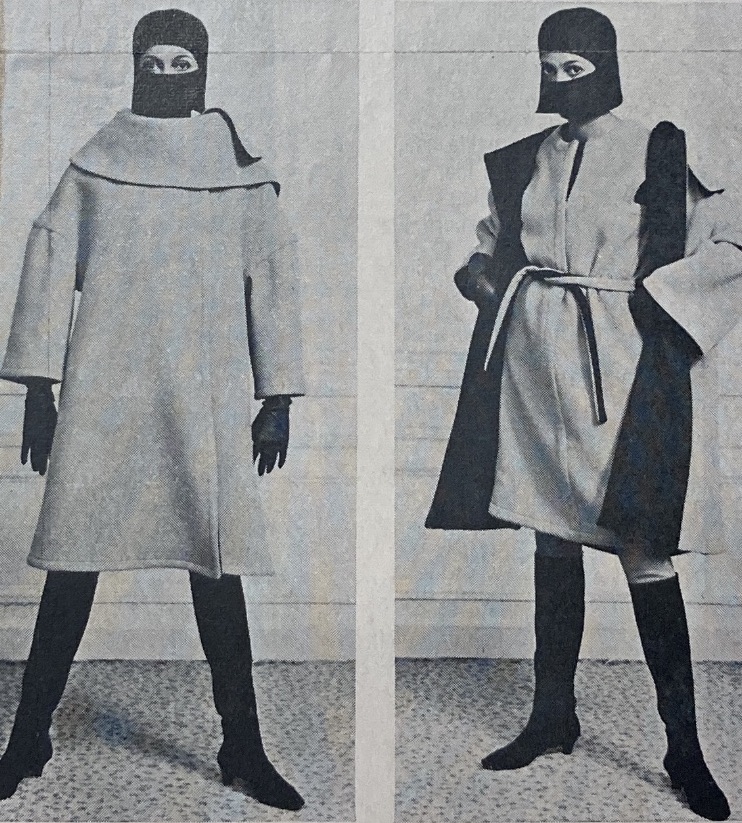 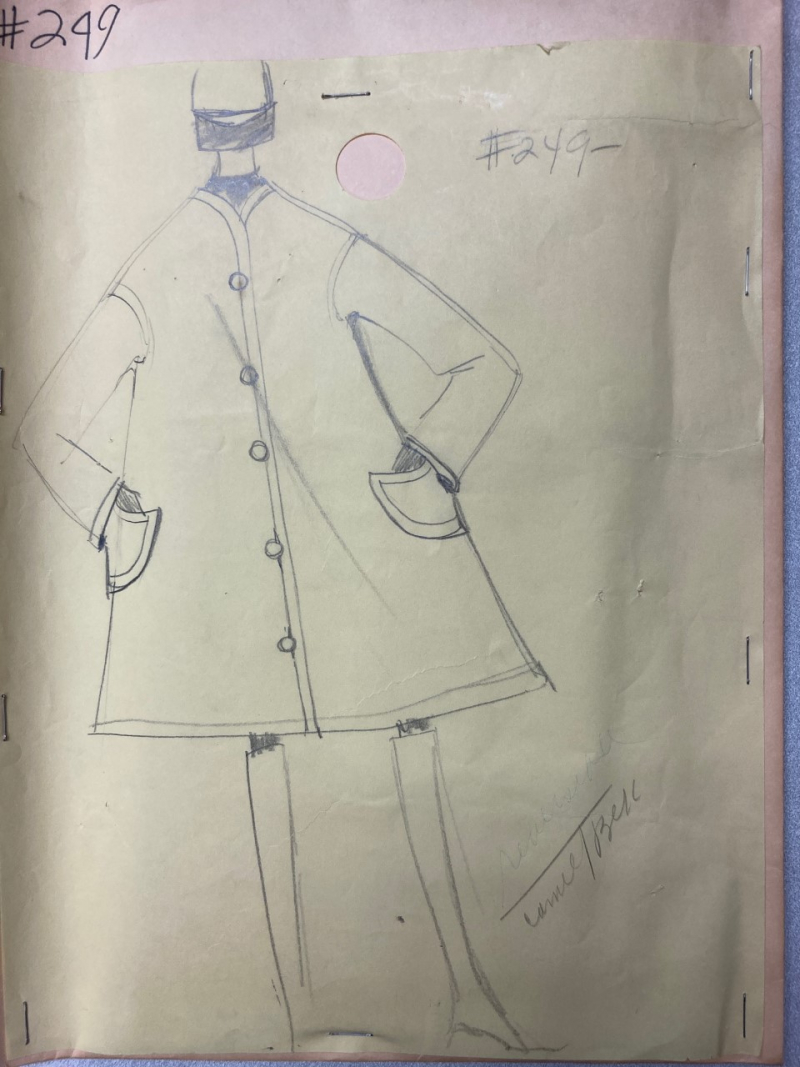 The unique design also features in Ebony magazine as part of the organization’s annual Fashion Fair runway show.[vii] Bennett is described in the Ebony caption as “a Negro milliner of California” who created the “headpiece, a black felt yashmak.” The term was used in other magazine captions as well; it referenced a face covering worn by certain Muslim women while in public. Gernreich’s sketch for a similar ensemble includes the “yashmak”-type hat as seen in Ebony. This headwear, along with the coat, dress, and footwear create a unified fashion expression. Did Gernreich approach Bennett with this total look in mind? Or, was this hat the result of collaboration? The creative process of later designers working with Gernreich involved both realizing his pre-designed headwear and originating pieces to enhance the clothing designs.[viii] It’s impossible to tell the level of collaboration between Bennett and Gernreich without oral histories or archival correspondence between the two key players. But it’s intriguing that Bennett was given credit for so much of the headwear shown with Gernreich’s c. 1964 lines, which makes me believe he had a role in originating concepts.

Stay tuned next week for part two of this series, in which Christina explores Bennett’s early biography and his later career in Los Angeles.

[i] Many of the images in this screenshot derive from: https://streisandstylefiles.com/show-magazine-1964-in-a-leon-bennett-feathered-headpiece/

[iv] The caption describes the hat as: “the yashmak, Leon Bennett’s adaptation of a Mohammedan woman’s veil.” Interestingly, photographs in the Sept 1964 edition of Harper’s Bazaar record Streisand attending one of Gerneich’s Fall 1964 showings in New York City.