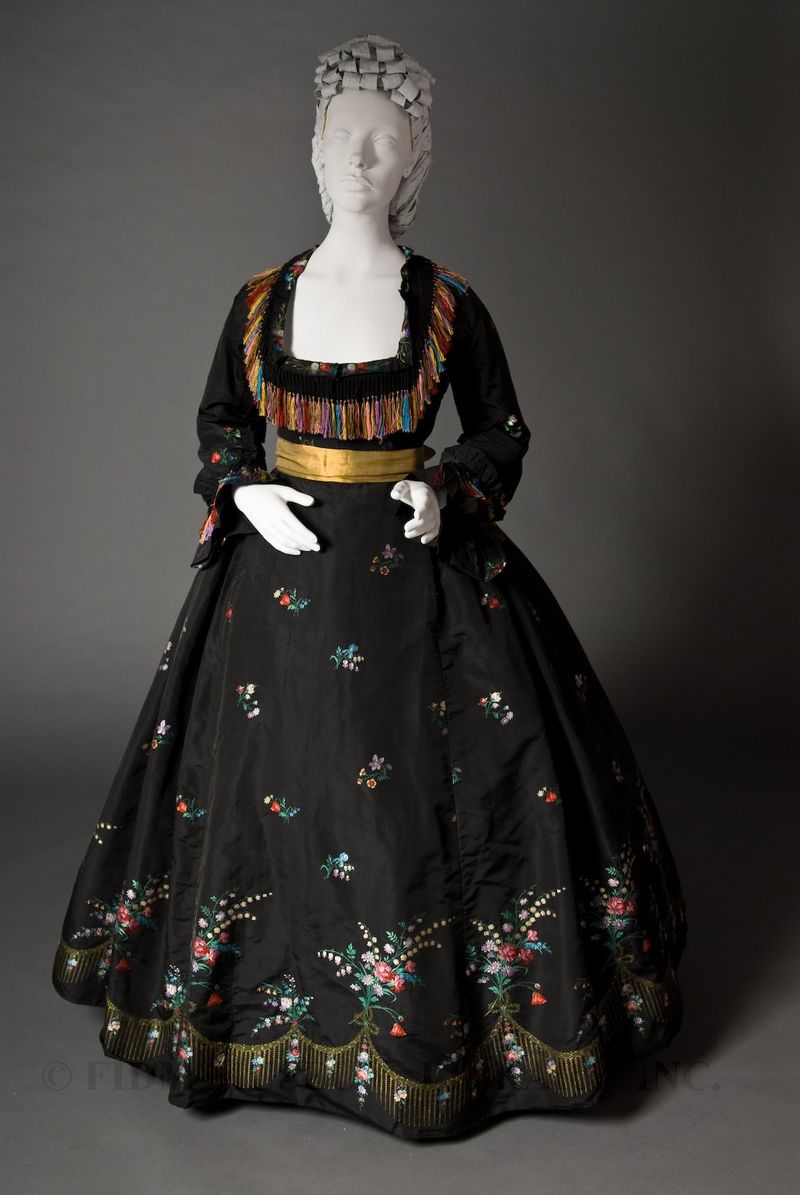 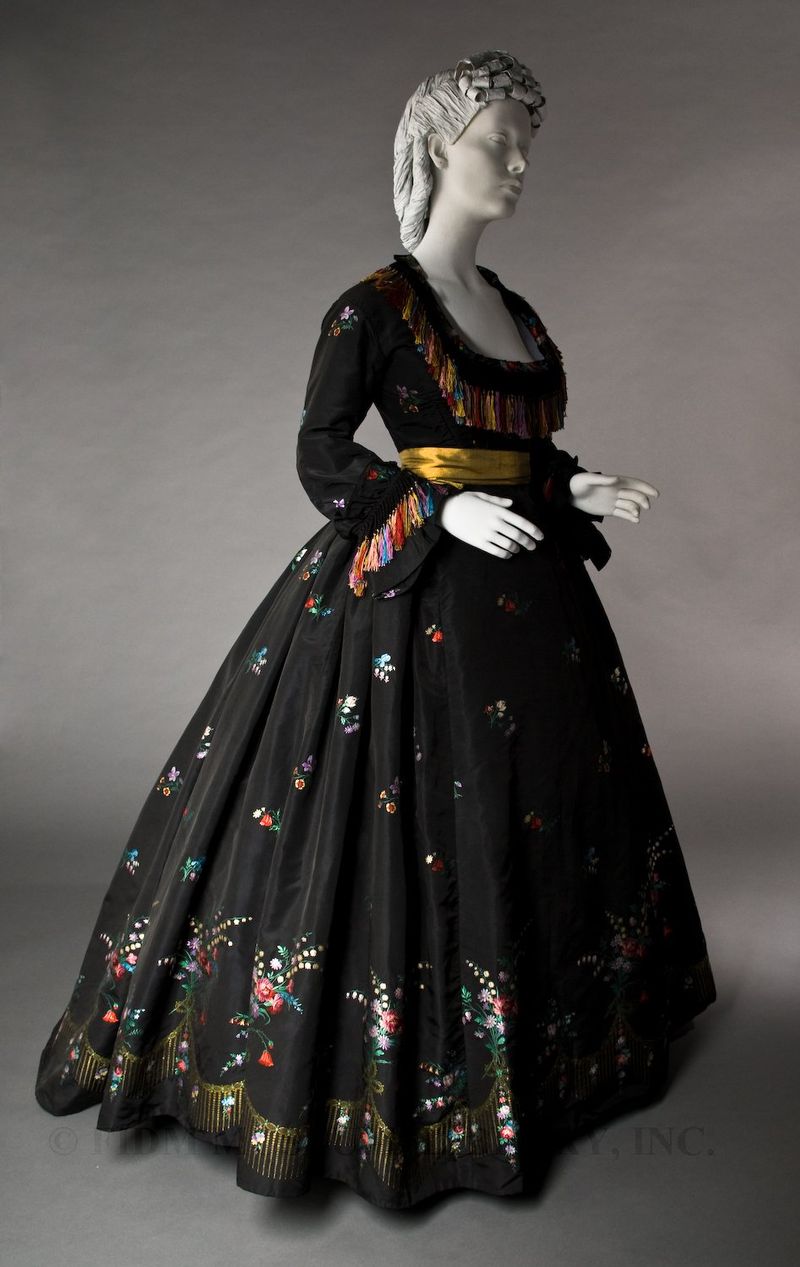 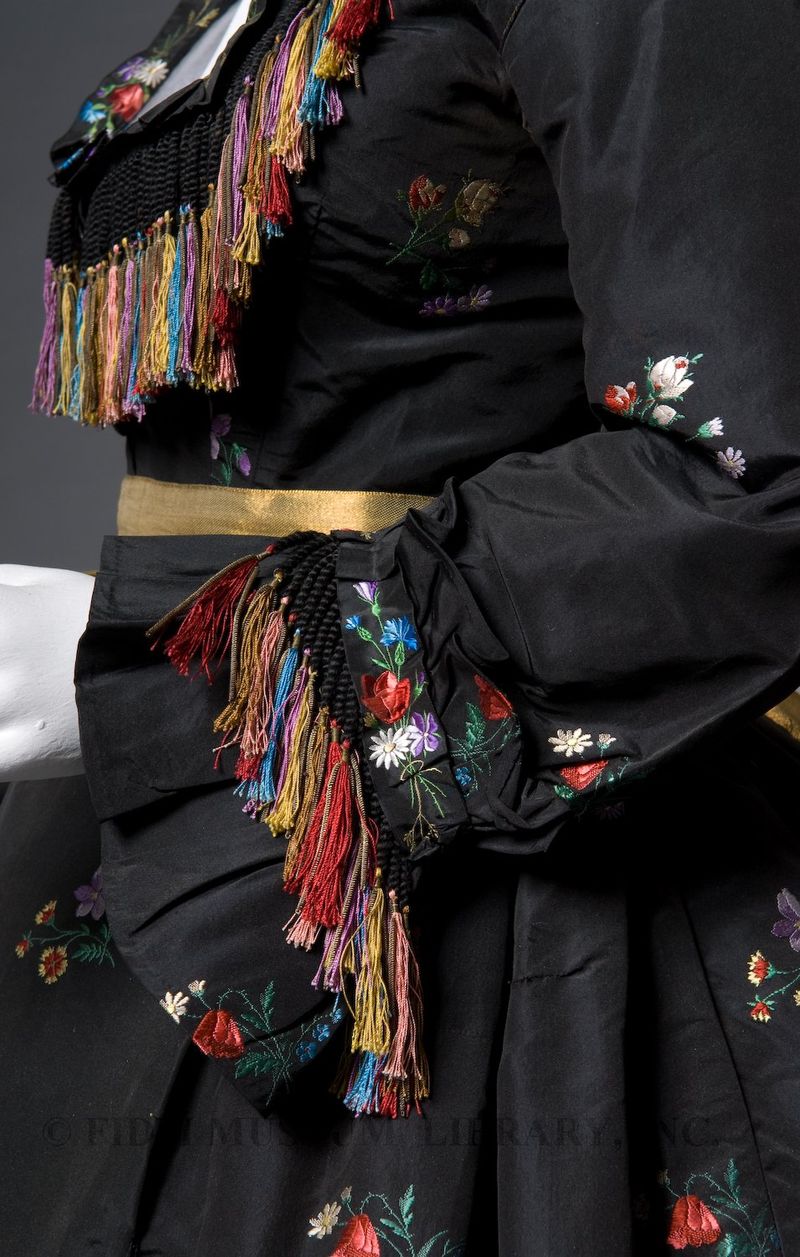 This black silk faille two-piece dress was worn by an unknown woman in approximately 1866. Though it appears extremely formal and elegant to our contemporary eyes, it would have been worn to a dinner or reception, rather than the most formal of evening balls.  The black ground creates a luxurious contrast to the multicolored floral sprays, which feature poppies, roses and bleeding hearts among other flowers.  Perhaps most compelling is the multicolored silk fringe which frames the bodice and cuffs while echoing the gold brocade swags and floral sprays along the hem.

Though the visual qualities of the dress were enough to overwhelm the Museum staff, we were also thrilled that the dress bears a label.  An inner label of silk petersham ribbon stamped with gold ink indicates that the dress was created by Madame Olympe, of 154 Canal Street in New Orleans. As the practice of associating a particular designer with a garment via a label was just beginning in 1866, we were VERY excited to have this additional information.

Using the label as a starting point, FIDM Museum curator Kevin Jones compiled existing research on Madame Olympe and conducted his own research into her life and times. He learned that Olympe Boisse was a native of France who lived and worked in New Orleans, becoming an importer of French millinery goods, or a modiste. Her career began in 1853 when she took over the business of A. Mace, who had been importing French millinery goods. By 1858, Madame Olympe had expanded her business to include dresses, lace and other necessary items for a lady of fashion.

According to a business directory, Madame Olympe’s shop was very popular and featured the most fashionable items in the city.  Madame Olympe’s business was most likely closed during the Civil War, when a blockade prevented nearly all dress and textile goods from reaching the American south.  Her business reemerged after the Civil War and prospered until 1885 or 1886, after which it was no longer listed in business directories.

Kevin presented his research in a paper titled “A French Modiste in an American City: Olympe Boisse & New Orleans” at the 2008 Costume Society of America Symposium in New Orleans. Have you ever heard of Madame Olympe, or seen a similar dress?  If so, please let us know!  We’d love to know more about her.