What the Earl saw was a graceful childish figure in a black velvet suit, with a lace collar, and with lovelocks waving about the handsome, manly little face, whose eyes met his with a look of innocent good fellowship.   Frances Hodgson Burnett, Little Lord Fauntleroy, 1886

The 1886 children’s story Little Lord Fauntleroy relates the tale of Cedric Errol, an American boy who inherits a British peerage and becomes Lord Fauntleroy. For much of the story, the boy wears a 17th century style costume of black velvet jacket and breeches, wide lace collar and cuffs with a trailing sash of black silk tied around his waist. Cedric’s hair is styled in long, spiral curls, which were called lovelocks. Illustrations by Reginald Birch show the boy in a variety of situations, almost always wearing his velvet suit. This invented look had little relation to anything currently in style for young boys and was similar to the way that the author, Frances Hodgson Burnett, dressed her two sons. Burnett’s clothing choices for her sons were likely influenced by her interest in the Aesthetic movement and by her long-term friendship with Oscar Wilde. Wilde’s fashion choices were surely an inspiration for Burnett, especially the velvet jacket and breeches worn during his American lecture tour in 1882.

Though the book was extremely popular, it was after the 1888 stage adaption that the “Little Lord Fauntleroy” look became widely popular for young boys. By 1893, variations of Little Lord Fauntleroy’s velvet jacket and breeches were featured in publications such as Harper’s Bazaar and Peterson’s Magazine. Surely little boys weren’t flipping through Harper’s Bazaar for fashion inspiration, so it is perhaps more accurate to say that the look was popular with parents who could impose their sartorial will on their sons. Written accounts suggest that “many a boy in the [eighteen]nineties was seared by this weird pestilence. Its contagiousness was heightened by maternal pride. Matrons dressed up their unwilling sons in the way of Master Cedric, and fondly exhibited them…”1

The Little Lord Fauntleroy style remained popular into the first decade of the twentieth century and was well-documented by photographers. Photographic evidence is particularly informative, because it allows us to see how the Little Lord Fauntleroy suit was worn and interpreted by real people. This provides a dimension of knowledge beyond that obtained by looking only at an extant garment. Featured below are two versions of the Little Lord Fauntleroy suit from the FIDM Museum. The cabinet card is from our growing collection of historic photos and the actual suit was featured in our 2008 exhibition “Aesthetes, Bohemians & Craftsmen: Artistic Dress, 1880s-1920s.“ 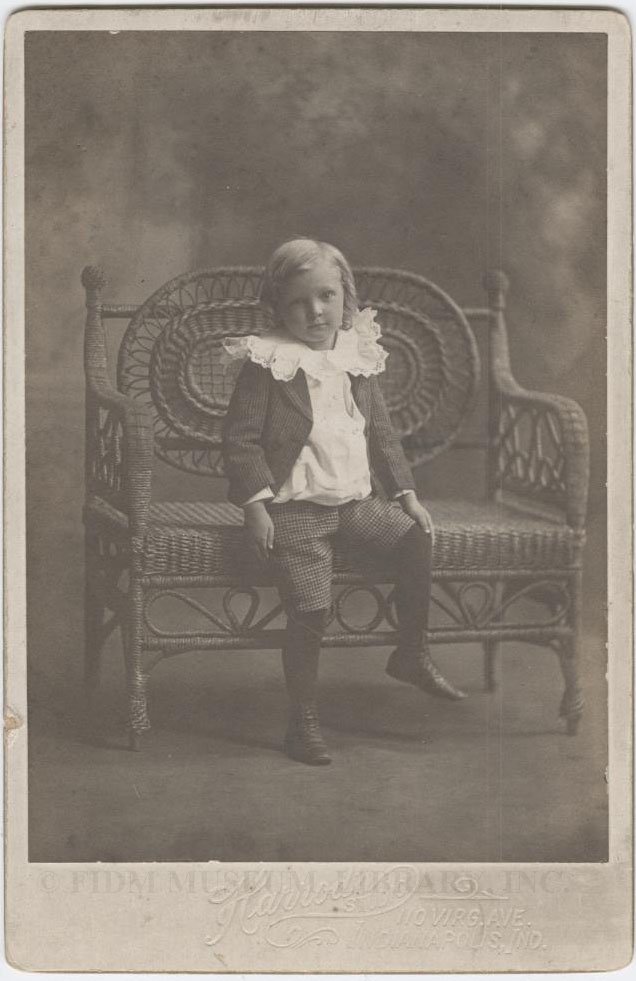 1 Quoted in Wilson, Anna.”Little Lord Fauntleroy: The Darling of Mothers and the Abomination of a Generation” American Literary History 8 (1996): 232-258.