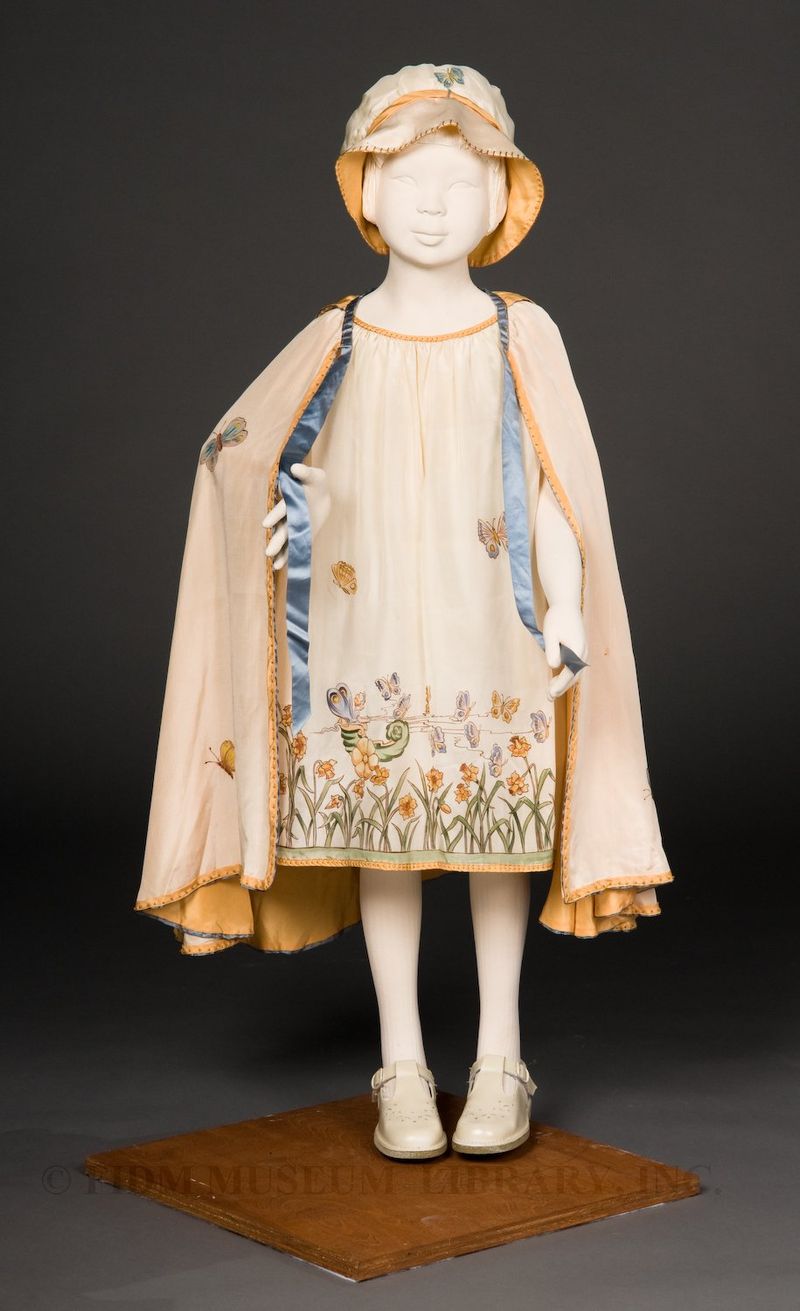 Hand-painted novelties, including dresses, scarves and ribbons, enjoyed a burst of popularity in the teens and twenties. A Paris fashion report from 1913 stated that “hand-painted dresses…are said to be the coming craze
at fashionable Summer resorts.”1 This was despite their high price, “which is said to be 40 per cent in excess of the ordinary figure.”2 In 1924, “painted things,” including gowns, gloves, stockings and scarves, were declared “in perfect harmony with the mode of the day and very smart.”3 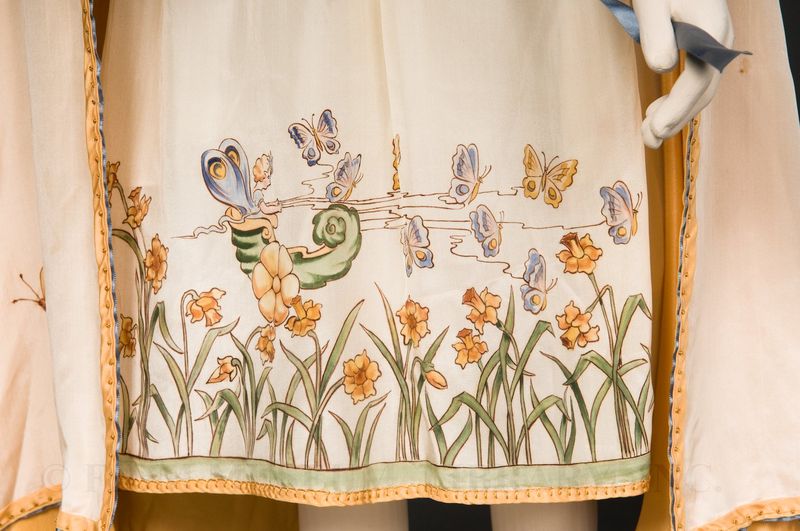 Description regarding actual painted imagery is thin, though floral and natural forms were apparently popular. A New York Times advertisement from 1926 featured a hand-painted dress with large, detailed roses at the proper right shoulder and opposite hem. The dress was imported from Paris and was available in the colors “Miami Rose, Springleaf, Cork, Grey, Navy or Black.”4 The three-piece child’s ensemble seen here features delicate hand-painted flowers and butterflies, along with a fairy driving a shell coach. The name of the ensemble, Dainty Blossom, suggests that the fanciful imagery might be related to a fairy-tale or story, but no corresponding source has been found.

Preliminary research suggests that the sudden appearance of hand-painted items during the teens and twenties might be tied to the Russian Revolution of 1917. At least one source suggests that silk painting was practiced by the Russian aristocracy and royal family.5 During the chaotic years before and after the Russian Revolution, many individuals associated with the Russian court fled the country, ultimately settling in Paris or New York. This exodus enriched the fashion industry, as among those who fled were the couturier Valentina, photographer George Hoyningen-Huene, Harper’s Bazaar editor Alexey Brodovitch and many unnamed seamstresses. Perhaps some of those who emigrated were skilled silk painters. Though it will take more research to determine if this link is creditable, a 1924 article about silk-painting on garments and accessories does mention the “Russian character” of some silk painting. 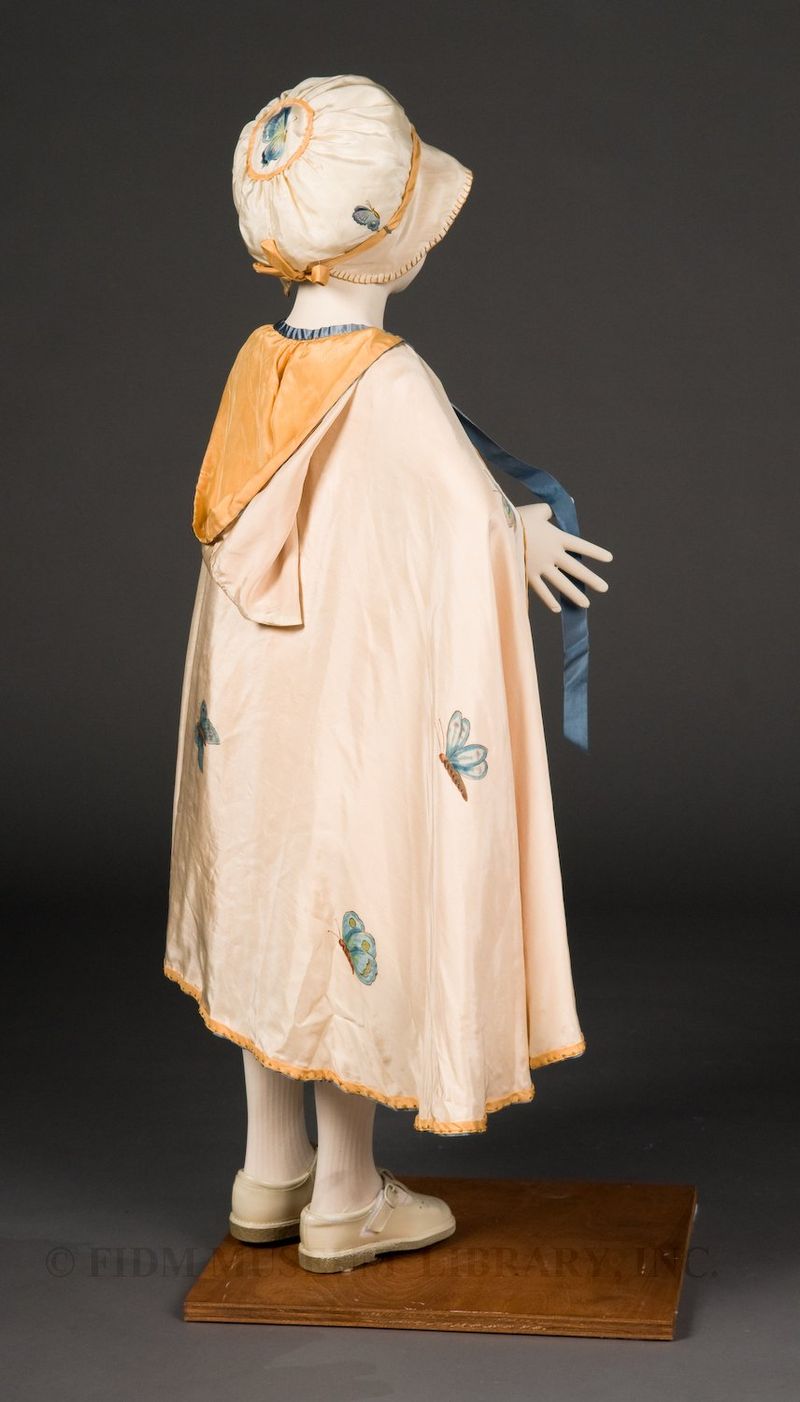