“Flower power” is usually associated with the late 1960s hippie aesthetic, but flowers were actually a popular decorative motif throughout the decade. The early years of the 1960s witnessed a proliferation of stylized and patently artificial floral forms, while real or “natural” flowers dominated the late 1960s. Often used as a motif in textile designs, flowers also appeared as three-dimensional embellishments on garments and accessories. Elaborate headdresses and hair ornaments made particularly good use of artificial flowers during 1964-65. The hand-dyed silk organza flowers on this 1963 Marc Bohan for Christian Dior evening gown are an early example of 1960s flower fever from the haute couture. The April 1, 1965 issue of Vogue praised floral patterned garments for evening wear in an editorial titled “The Garden of Evening.” This flower-covered Norman Norell evening coat, though not featured, would have been a perfect fit for the Vogue editorial. Hand-dyed silk flowers in shades of pink and white are stitched to the coat, which is lined in pink silk. A center-front opening is hidden by the oversize flowers. 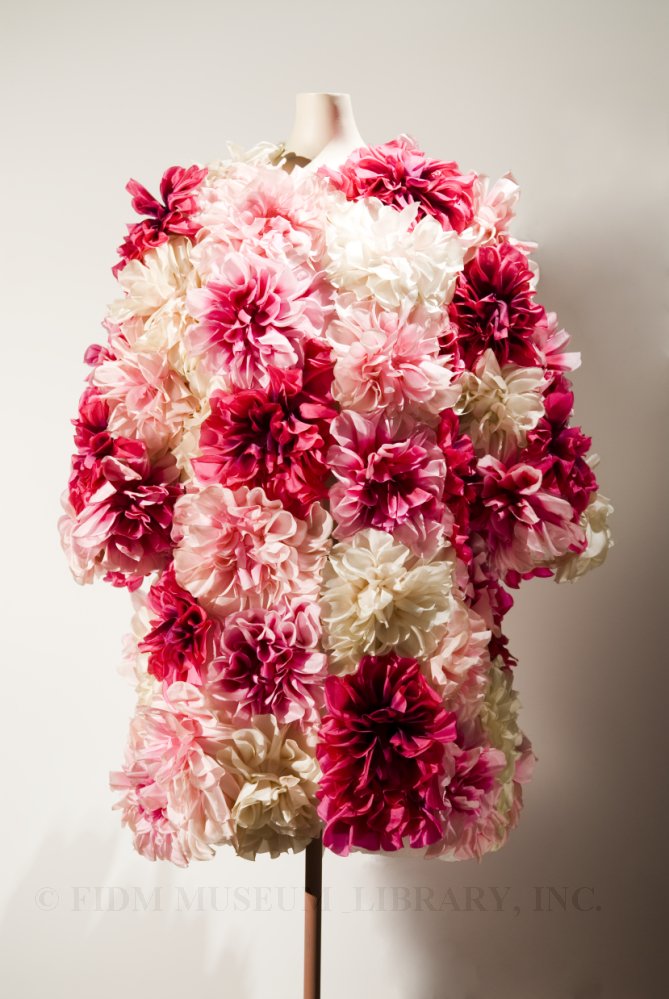 Though Norman Norell’s day wear was generally simple and understated, his evening wear was much more playful. Norell believed that evening was the correct time for eye-catching displays of sequins and/or feathers, while day wear could never be too simple. This belief served Norell well throughout much of his career, but ensured that his designs were slightly out of step with the 1960s Youthquake. Never one to shy away from repetition, Norell continued designing understated, elegant day wear when the streets were filled with young women in light-hearted mini-dresses. Norell was not alone, as many designers failed to understand the significance of the Youthquake. The existence of this fanciful coat, however, indicates that Norell made at least one attempt to engage the playful aspects of 1960s fashion. Or does it?

In May 1964, Vogue featured a flower covered Balenciaga coat.1 Covered in pink and white flowers, it was called the “Doge coat” and is nearly identical to the Norell evening coat pictured above. The only difference is in the length: Balenciaga’s coat is floor length vs. Norell’s knee length. As we haven’t yet determined the exact date of the Norell coat, it’s impossible to know which version was created first. Regardless of which came first, both coats embody the way in which youth fashions were appropriated and interpreted by high-end ready-to-wear and haute couture designers during the 1960s. As seen here, both Norell and Balenciaga took an aspect of youth culture that made sense, i.e. flowers as a symbol of girlish youth, and used it to create an elegant item of clothing appropriate for women of all ages.

1 Page 163 for anyone who wants to track this down!