The shirtwaist first emerged in the 1860s as a casual, daytime alternative to the matched bodice and skirt ensembles worn by nearly all well-dress women. Most frequently worn by young women, the shirtwaist was usually paired with a dark colored skirt and accessorized with a belt or sash. The Garibaldi, a high-necked, long sleeved shirtwaist styled to resemble the uniforms worn by the troops of celebrated Italian hero Guiseppe Garibaldi, was the first style of feminine shirtwaist to become widely popular. Though the Garibaldi was occasionally made from red or black wool, it was more commonly fabricated in white cotton. In 1862, Godey's Lady's Book suggested that the new fashion for the Garibaldi shirt worn with a skirt was "destined to produce a change amounting to revolution in ladies' costume."1 Given the rapidly growing popularity of the shirtwaist among women, this would prove to be an accurate prediction. 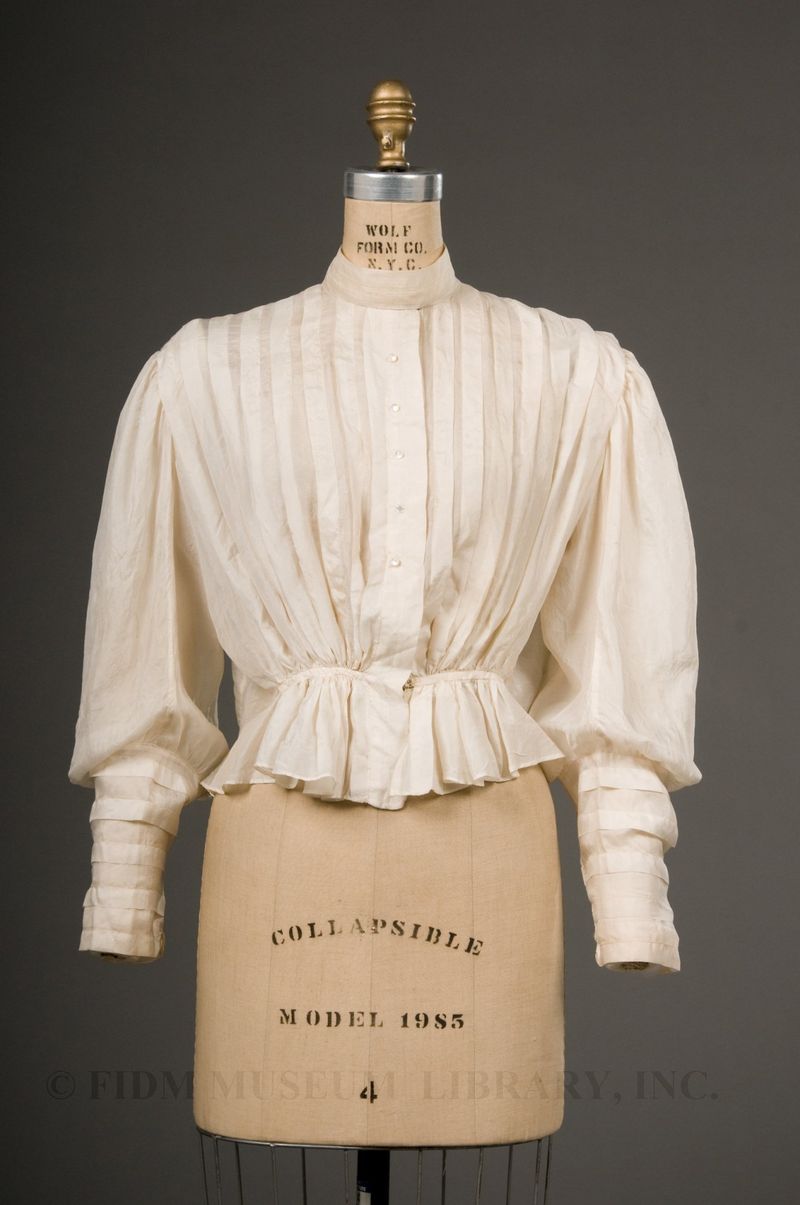 As a basic garment type, the shirtwaist was endlessly variable. Dainty shirtwaists featured lace insets and delicate embroidery while other versions were tailored in crisp linen or cotton to closely resemble a man's shirt. Most women probably purchased ready-made shirtwaists, as advances in garment sizing and manufacturing meant that quality shirtwaists were available for a reasonable price. The cost of a shirtwaist varied widely, with late 19th century catalogs for stores like Montgomery Ward and Sears, Roebuck, and Co. indicating that shirtwaists could be purchased for almost any price between 25 cents and $7. Because shirtwaists were available in an array of styles at both high and low prices, they were adopted by a tremendous cross-section of American women. Young working women wore white shirtwaists and dark colored skirts for jobs as clerks, sales girls or teachers. Sporting women wore them for participating in activities like bicycling, hunting or mountaineering. Dressy shirtwaists of taffeta or silk were worn for late afternoon receptions or less formal evening occasions.

This shirtwaist from our collection is constructed from a lightweight, almost sheer cream silk. Though a shirtwaist indicated a slightly relaxed mood, it would have been worn with the requisite undergarments: a chemise and corset. The sleeves, full in the shoulder and close-fitting at the lower arm, are typical of the early-to-mid 1890s. During this decade, sleeve fullness and variation were a noted characteristic of women's garments. Because shirtwaists were always tucked neatly into a skirt, the front pleats are gathered into a waist-level band. This clever construction trick would have helped the wearer keep her pleats tidily in place. 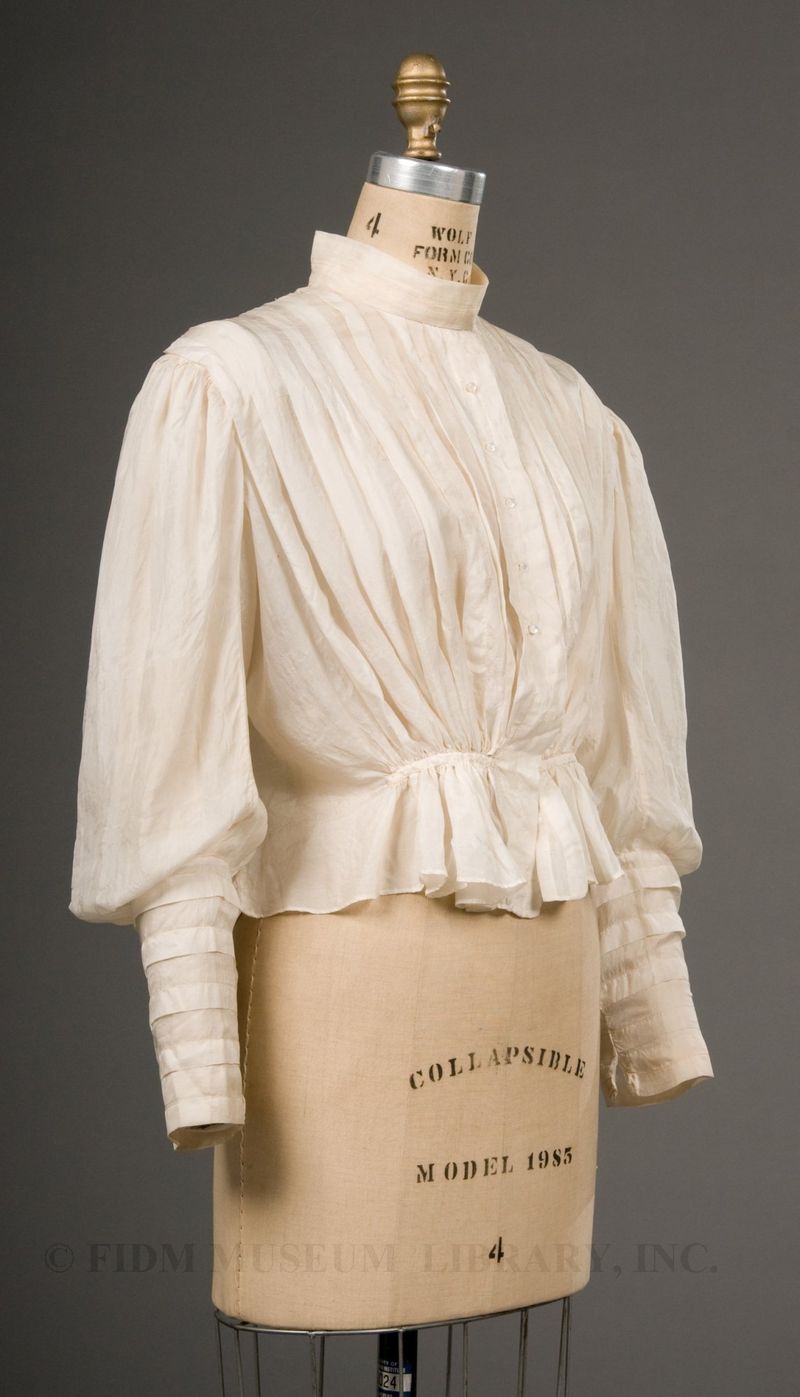 The shirtwaist continued to grow in popularity as the 19th century gave way to the
20th century. The Gimbel Brothers Illustrated 1915 Catalog boldly declared that "the women of other lands occasionally wear a shirtwaist–the American woman occasionally wears something else. Her daily apparel is a smart tailored skirt and neat blouse."2 By all accounts, the shirtwaist was ubiquitous, becoming something of a national
uniform for American women. For the first time, American women "dressed
with a uniformity of look which blurred economic and social
distinctions."3 Though the garment itself may have eliminated some outward
markers of economic or social difference, the manufacturing process of
this widely worn garment highlighted deeply entrenched economic divisions.

In the late 19th century, many ready-made garments, including
shirtwaists, were manufactured in small-scale factories known as
sweatshops. Crowded, poorly ventilated and staffed with low-paid
immigrant labor, sweatshops fed an increased interest in fashionable, affordable, ready-made clothing. Though various activists had already decried the
conditions of sweatshop labor, the dire working conditions of many
garment workers were highlighted by the Triangle Waist Factory fire of 1911.
During this disaster, 146 people (mostly young women) were
killed attempting to escape a fire in the premises of a New York City
shirtwaist factory. In the aftermath of the fire, new laws and
additional enforcement of old laws led to limited improvements in the
working conditions of garment workers.

3 Kidwell, Claudia B., and Margaret C. Christman. Suiting Everyone: The Democratization of Clothing in America. Washington, D.C.: Smithsonian Institution Press, 1974.