During the 1950s, casual clothing became an increasingly important part of the American wardrobe. Economic prosperity in the wake of World War II meant that many individuals had time for leisure and relaxation, either on the weekend or during extended vacations. Air travel was relatively cheap, making vacations abroad a reality for many people. Destination road trips were also popular, especially when the interstate highway system began linking major US cities in 1956. During their travels, many tourists purchased souvenirs of places visited. For visitors to Mexico or southern California, a made-in-Mexico embellished circle skirt might have been a popular reminder of a sun-soaked vacation.

Adhering to the full-skirted silhouette popular in 1950s fashion, this printed skirt was probably made in Mexico for the tourist market. Advertisements in the Los Angeles Times indicate that hand-painted or printed Mexican skirts could be purchased at a number of local retailers, including Mexicali Moods (5475 Wilshire Blvd) and Maya de Mexico (9355 Wilshire Blvd). Based on a preliminary survey of regional newspapers, Mexican-themed circle skirts seem to have been most prevalent in southern California. This makes sense given the long-standing, well-established flow of people and culture between Mexico and California. Furthermore, it's an informal style attuned to the relaxed, casual culture of southern California.

Designs varied widely, but usually featured stereotypically Mexican imagery, like cacti, sombreros or the vaguely Mayan or Aztec designs seen here. Design placement on these skirts often takes advantage of the broad expanse of fabric in a circle skirt, with vertical columns of pattern widening to the base of the skirt. The ground fabric is typically a solid color, with a printed or hand-painted design. Like the skirt pictured here, the base pattern is often embellished with hand-sewn or glued sequins. To ensure a full silhouette, this skirt would have been worn with a petticoat. In period advertisements, it was usually paired with a solid color blouse (sometimes off-the-shoulder) and flat leather sandals. 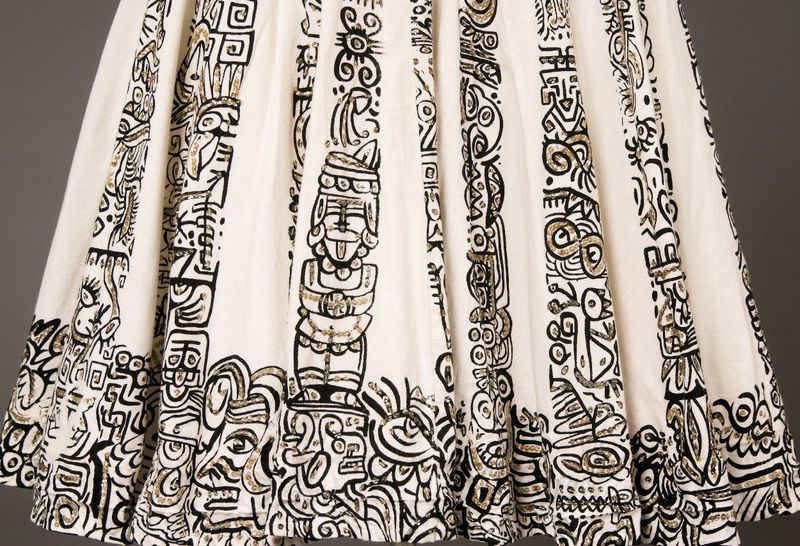 When thinking about items purchased abroad, one of the first questions that comes to mind is whether the item is made for locals or tourists. In the case of Mexican-themed circle skirts, they were probably produced specifically for tourists. In general, the look bears some resemble to a style of Mexican national dress called china poblana. According to one 1952 same article, full skirts and off-the shoulder blouses were worn only by "peasant women" until the combination became popular outside of Mexico. Only after this outside approbation did urbanites adopt the look. As one reporter put it in 1952, "Mexican styles have become so fashionable that even Mexican women are wearing them."1

One response to “Hand-painted circle skirt”