By 1965, the miniskirt had infiltrated women's fashion. Worn by women of all ages, the popularity of the style resulted in a new fashion focal point: the leg. Exposed for the first time since the 1920s, the leg needed a new wardrobe. Colored, patterned and textured knee-socks were worn with low-heel, square-toed shoes. Sheer neutral and black stockings became passe, replaced by tights in a rainbow of colors and textures. According to an end-of-the-decade fashion recap from 1969, "the hosiery industry rejoiced as stockings went from sheer to crazy with color and pattern making the rising hem easier to take."1 The same article also noted that "many [women] switched to tights" during the 1960s.

Boots, which had been relegated to bad weather or outdoor pursuits for many decades, made a return to the fashion scene. André Courrèges' Spring 1964 collection, which featured all-white, minimalist garments paired with flat boots, goggles and helmets, is often cited as the origin of 1960s boot mania. Beth Levine, who designed a pair of jewel-studded evening boots as early as 1959, also deserves credit for bringing the boot to forefront of fashion during the 1960s. Levine's creativity also resulted in an innovative 1960s garment which mimicked the look of a boot, the all-in-one stocking shoe. 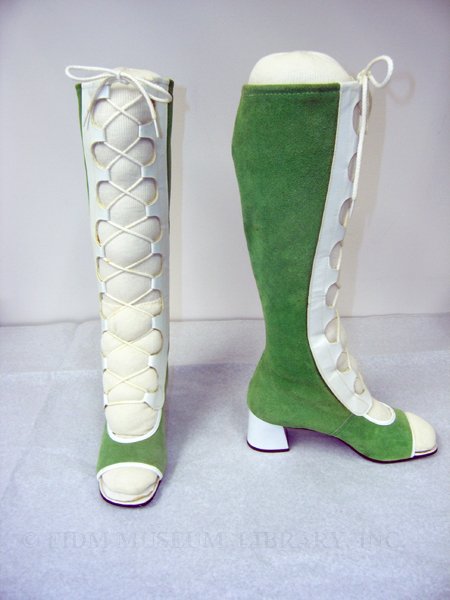 By the late 1960s, boots were available in a variety of manifestations, from short to tall, leather to synthetic, solid color to embellished. Fashion had begun to turn away from the futuristic forms of the middle 1960s and started mining the past for inspiration. Laced boots, though often made of modern, synthetic materials, were reminiscent of late 19th century women's footwear. This pair of green suede and vinyl boots showcases this trend, and updates it with an open-toe. Because of its airy lacing, open-toe and bright coloration, this boot seems designed for spring and summer, not cold weather. As part of their 1960s transition from functional to fashionable footwear, boots were worn throughout the year. As described by the title of a September 1968 New York Times article, "Warm-weather or not, women are boot-minded." In the article, summer boots are described as being "wilder, sillier, more decorative and more diversified than ever before."

Synthetic and non-traditional materials were popular for fashion and accessories throughout the 1960s. Vinyl and plastic, sometimes paired with real leather or suede, were used to create whimsical footwear. An August 15, 1968 Vogue editorial called "American-Made, Man-Made" highlighted the role of synthetics in footwear, praising advances which put "tomorrow's man-made materials right at–and on–your feet today." These creations,  meant to be worn a few times and then discarded in favor of the newest trend, are indicative of the optimistic attitude of the 1960s. From the perspective of a museum professional, these synthetic materials can be extremely difficult to store and maintain because they deteriorate over time. With age, plastics tend to become sticky, yellowish, and sometimes cracked or brittle. To learn more about how museum objects deteriorate over time, revisit the post about our conservation collection. Fortunately, these suede and vinyl boots are in good condition, probably due to the fact that they are composed primarily of suede, not vinyl. 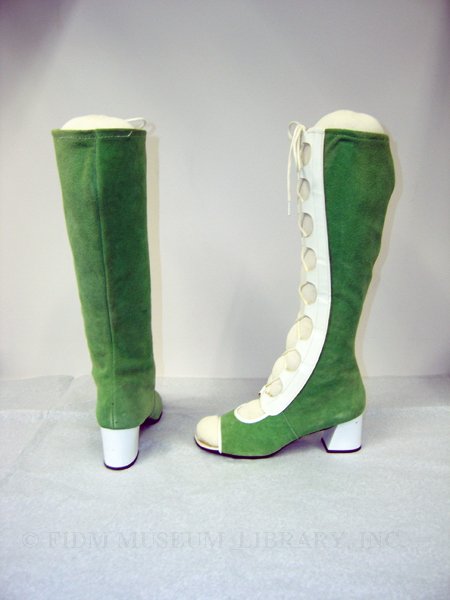