Full disclosure: I’m a big fan of Bonnie Cashin. Though I admire an elegant evening gown as much as anyone, I appreciate Cashin’s interest in creating a wardrobe that suited the everyday activities of twentieth-century women. Within this framework, Cashin designed clothing that was functional, but never boring. Her use of diverse textiles (patterned wool tweeds, jersey, leather, suede) and unusual fastenings give her straightforward silhouettes an inventive appeal. In Cashin’s own words: “It’s much easier to design a fancy style than a simple one, but I try to avoid it because when it comes to wearing it, you really don’t want things that are fussy. All are lives are too complicated to put up with that sort of thing in clothes.”1 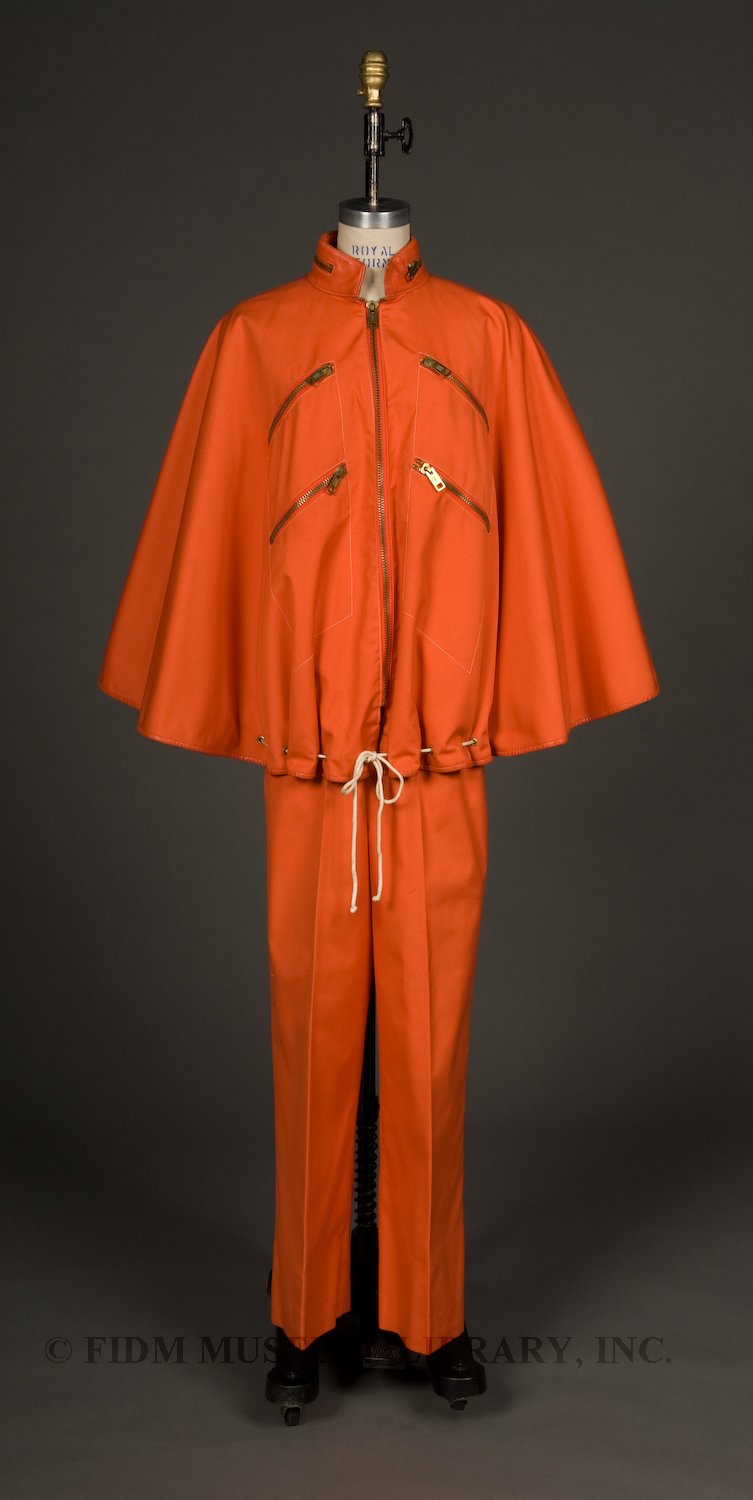 But, I have to admit, even as a big-time Cashin fan, I’ve always been somewhat perplexed by this electric orange ensemble. Like many Cashin designs, it has a slightly rugged, almost outdoorsy feel. Comprised of a poncho and trousers, this ensemble bears many Cashin signatures, including leather trim, and fasteners that are both decorative and functional. Ponchos were an important part of Cashin’s design vocabulary and she promoted the garment throughout her career. As roomy outerwear that lent itself to layering, ponchos aligned with Cashin’s belief in a modular wardrobe consisting of several pieces that could be mixed and matched at will. This poncho still has its label, declaring the ensemble a “Sills/A Bonnie Cashin Design.” Unlike many designers, Cashin never licensed her name; if a garment label reads “Bonnie Cashin,” she designed it herself. 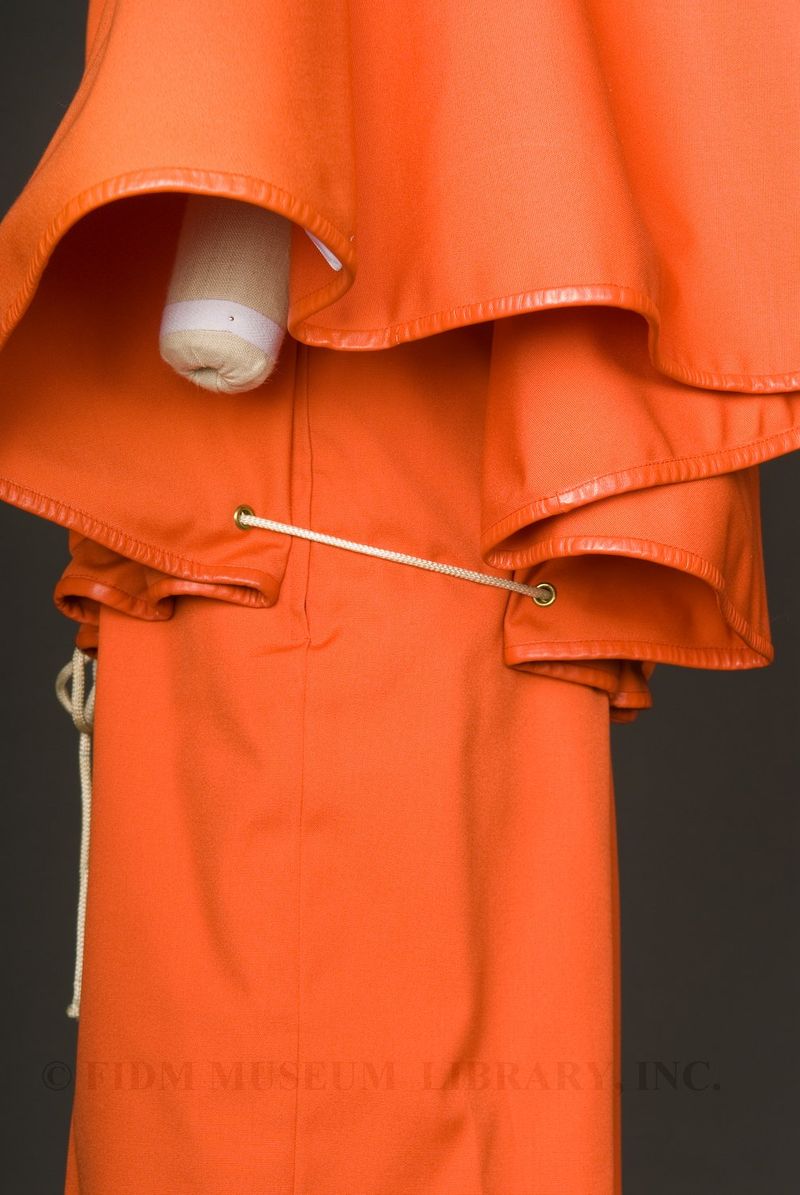 88.5.1AB  Note the tone-on-tone leather trim, a signature element of every Cashin design for Sills.

Something about this ensemble has always struck me as very specific, even purposeful. In searching for more information on this particular Cashin design, I found a few references that might hint at its intended function. In “Free-Wheeling Fashion for an Easy Ride,” a 1977 New York Times article, the author describes Cashin’s interest in designing practical attire for bicycling. According to the article, from the late ’60s, Cashin’s collections for Sills always included one ensemble designed specifically for bicylists. Though the bottom half of Cashin’s bicycling ensembles varied, the top portion was always a jacket or poncho with large pockets. Though voluminous, this poncho was desgined to pull close to the body with a drawstring cord. The sleeves would billow a bit when riding, but this probably wouldn’t be a problem at the sedate pace of an urban commuter. What’s more, the article notes that Cashin’s bicycling ensembles were always produced in bright colors like or orange or yellow for maximum visibility. And, Cashin’s bicycling jackets or ponchos always included large, practical pockets with secure fasteners. Bingo! 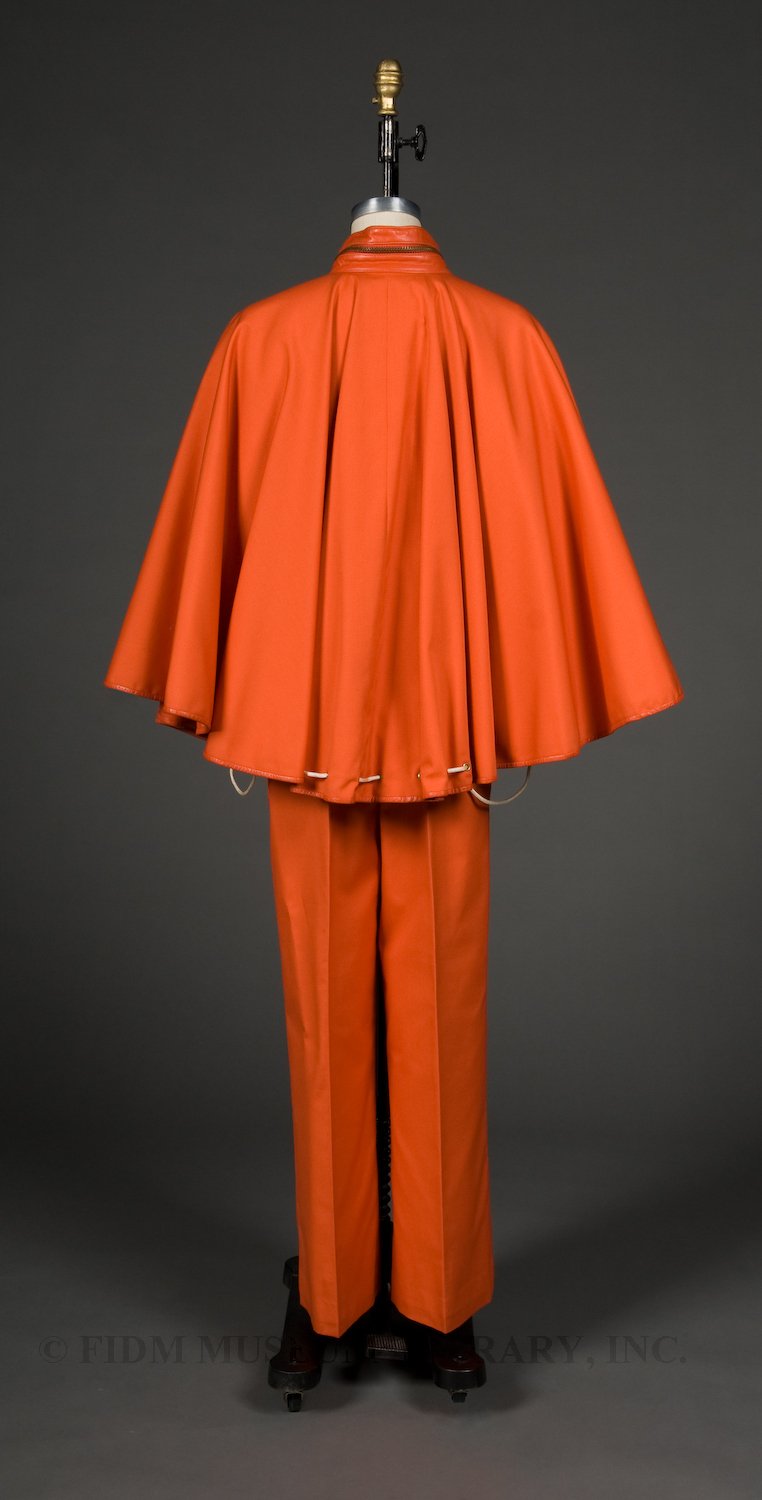 There are a few hitches in this tidy theory. Though the poncho has large pockets, they’re on the front. According to Cashin, her bicyling ensembles always featured large pockets on the back of the jacket or poncho, “because things fall out of front pockets when you learn forward over the handlebars.”2 In addition, the trouser legs might be slightly wide for safe cycling. Unless rolled up a few times, they might have tangled in the chain or wheel spokes.

Readers, what do you think? Does this ensemble seem practical for bicycling? Or is it a non-specific example of Cashin’s insistence on practicality and functionality as the most essential elements of design?