Best remembered today as Marilyn Monroe's favorite designer, Ceil Chapman was famous in the 1940s and '50s for her glamorous yet affordable evening looks. Her ready-to-wear "dream dresses," as the New York Times called them in 1957, were designed to grace the debutante balls, senior proms, cocktail parties, dinner dances, and swanky nightclub outings that filled women's social calendars in mid-century New York.1 "Here's one house that understands the importance of the cocktail dress," Women's Wear Daily remarked approvingly.2 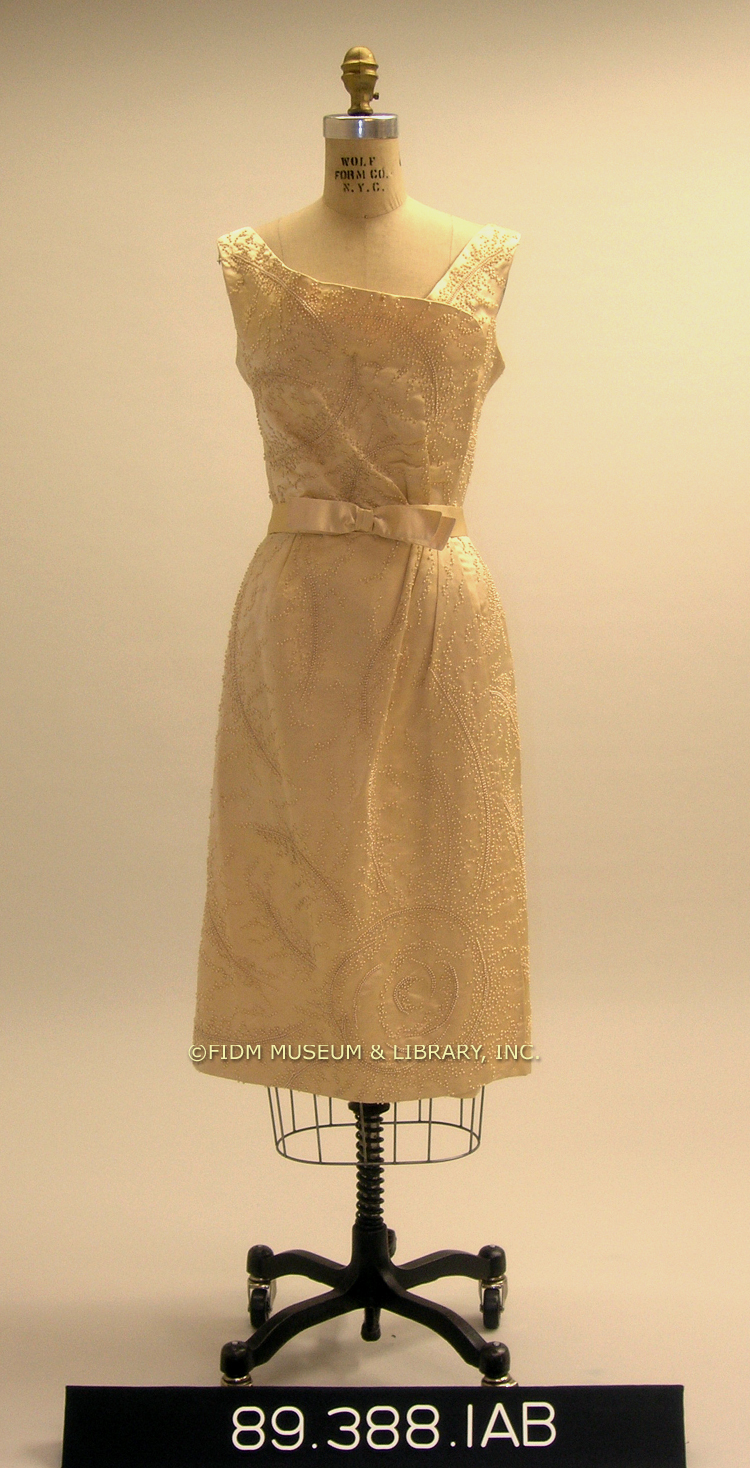 Chapman launched her eponymous label in 1940, after briefly partnering with Gloria Vanderbilt and her twin sister, Thelma, in a company called "Her Ladyship Gowns." She became a favorite of New York's theater crowd before expanding her fan base to Hollywood. She created Elizabeth Taylor's trousseau when she married her first husband, Nicky Hilton, in 1950, and dressed starlets like Deborah Kerr, Eva Gabor, and Jayne Mansfield as well as Monroe. A tireless self-promoter, Chapman appeared in magazine advertisements endorsing girdles, hairspray, Playtex, and even Western Union telegrams. She provided gowned models for a Cadillac ad campaign and loaned dresses to NBC in exchange for on-air promotional credit. 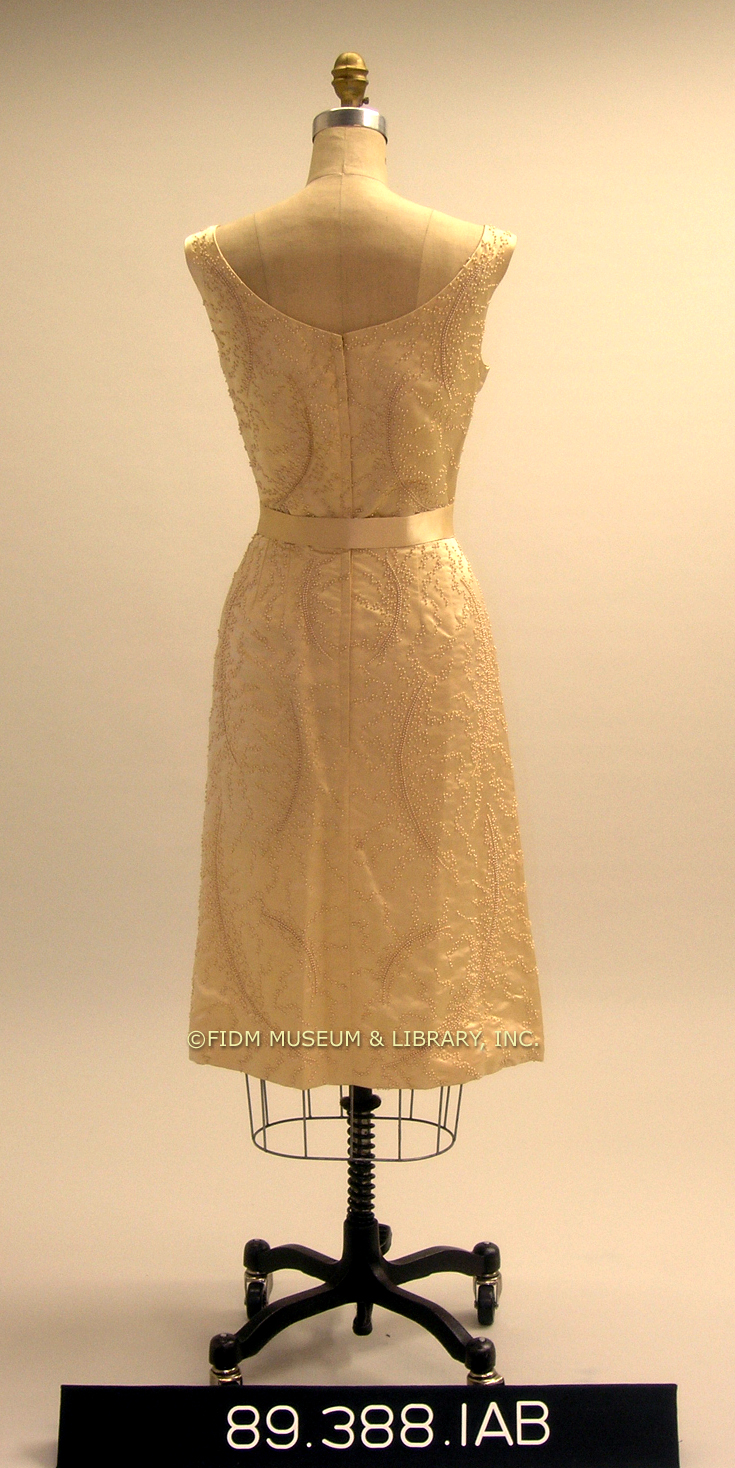 Chapman was known for her elaborately draped bodices, even patenting her draping techniques. She argued that while a male designer would sketch a dress and then assume that "he can take his sketch and drape it around a figure and any woman can wear it," a female designer "isn't thinking of a drawing. She is thinking of a live person wearing it."3 Chapman revived the bias cut popular in the 1930s, applying it to sophisticated, sexy gowns in expensive-looking materials. Other design signatures included dramatic décolletages, beading, and hips accentuated by rosettes, pleats, peplums, and padding. Many of these features can be seen in this cocktail dress and matching belt of cream-colored satin, machine-embroidered with faux pearls. This dress may come from Chapman's 1959 collection, which Women's Wear Daily described as "a series of after-dark dresses…. Some of the most exquisite embroideries of crystal beads, sequins and pearls are worked out in Persian-like patterns … with slender skirts for an elongated line."4 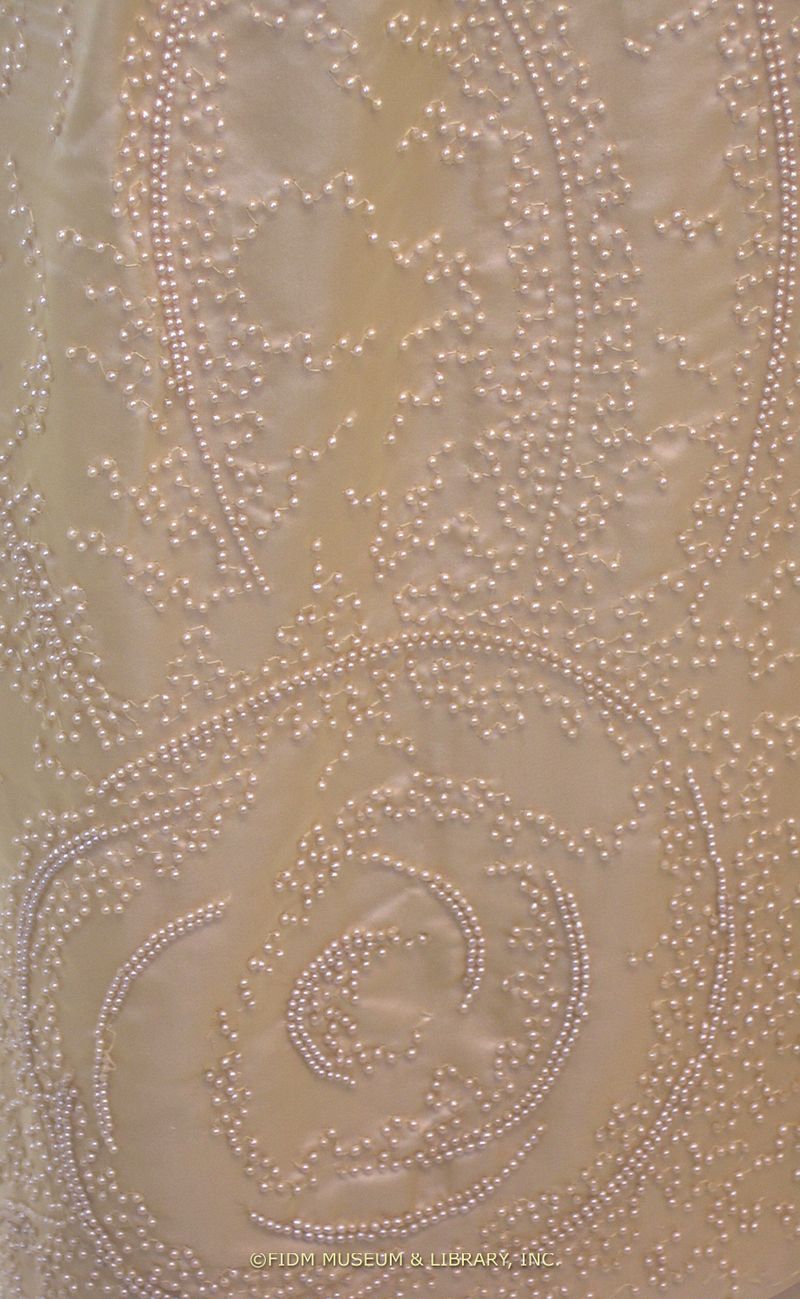 Chapman retired in 1965, only to try to revive her label in 1969. But fashion had already moved on from the formal, corseted, ladylike elegance of her heyday. Chapman died on July 13, 1979, after a long battle with lung cancer, unaware that her third husband, Tom Rogers, had succumbed to a heart attack a few days earlier.5 Today, her gowns are highly prized by vintage collectors and celebrities hoping to recapture some of that Marilyn magic: at a 2014 movie premiere, Kate Upton walked the red carpet in a 1950s Ceil Chapman cocktail dress.