Mollie Parnis (d. 1992), a mid-twentieth century New York designer who dressed First Ladies and movie stars, once told a reporter, "The last thing I want to talk about is what people are wearing."[1] A curious sentiment for a woman who spent her entire life in the fashion industry, but Parnis was far from an average designer. At the height of her career, the Park Avenue home she shared with her husband and business partner, L. J. Livingston, became a modern-day salon, with visits from politicians, journalists, artists, and actors. This striking black and blue velvet appliquéd coat, a recent donation to the FIDM Museum, deviates from Parnis’ typical aesthetic, but its geometric design can be explained by her lifelong devotion to the arts. 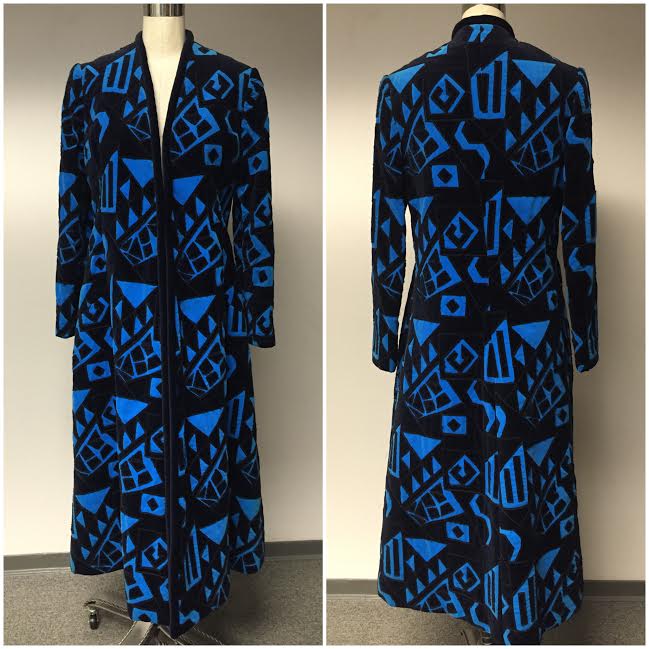 Despite her reputation as one of New York’s most refined hostesses, Parnis came from humble beginnings. Her parents were Jewish Austrian immigrants, and Parnis had only a high school education when she began working as a blouse salesperson in a small store.[2]  Her husband also worked in the textile industry, and after they married in 1930 the couple started the Parnis-Livingston clothing company – she the designer, he the business manager. The company managed to thrive throughout the Great Depression, and by the end of the 1940s Mollie Parnis clothing was featured regularly in Vogue. She achieved stardom when First Lady Bess Truman wore her designs, the beginning of a flourishing relationship with the women of the White House. Parnis dressed Mamie Eisenhower for her husband's swearing-in ceremony in 1957, and supplied much of her day-to-day wardrobe. She went on to dress future First Ladies Lady Bird Johnson, Betty Ford, and Rosalyn Carter. When a woman wore Mollie Parnis, she knew she would be regarded as traditional, elegant, and polished – making the flamboyant pattern of the velvet coat all the more incongruous. 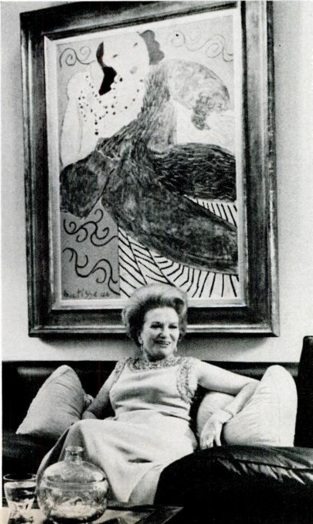 Mollie Parnis in her Park Avenue home with a Matisse painting from her personal collection. Via Life Magazine, 1966.

Parnis told Life Magazine, “My greatest regret is my lack of formal education,”[3] a driving force in her attentiveness to politics, journalism, world travel, and art. A 1958 New York Times article discussed the role art played in inspiring fashion designers, and mentioned Parnis’ personal collection of Salvador Dalí, Jacques Lipschitz, Pablo Picasso, and Henri Matisse.[4] These artists share an abstract aesthetic, a characteristic reflected in the velvet coat’s textile design. Matisse was a particular favorite of Parnis’; toward the end of his career, he focused on creating works of art from cut paper. Is it possible the appliquéd technique used on this coat was inspired by Matisse’s own cut-out masterpieces?

Parnis participated in two events in 1955 that could further explain the artistic provenance of the piece. In October, she took part in the Fuller Fabrics Modern Masters collaboration, in which American designers created ensembles using printed textiles designed by renowned artists.[5] Did Parnis take conceptual inspiration from this project for her abstractly patterned coat? The following month, she was featured in a fashion show in Vienna, Austria sponsored by the Velvet Institute of America and Pathé films.[6] This coat is made entirely of velvet, and the patterning is similar to the famous early twentieth century Viennese design house Wiener Werkstatte – making it possible this coat was her contribution to the fashion show in Vienna. The body-skimming silhouette makes the coat challenging to date precisely, but there is certainly a strong correlation between the design and Parnis’ artistic inclinations. 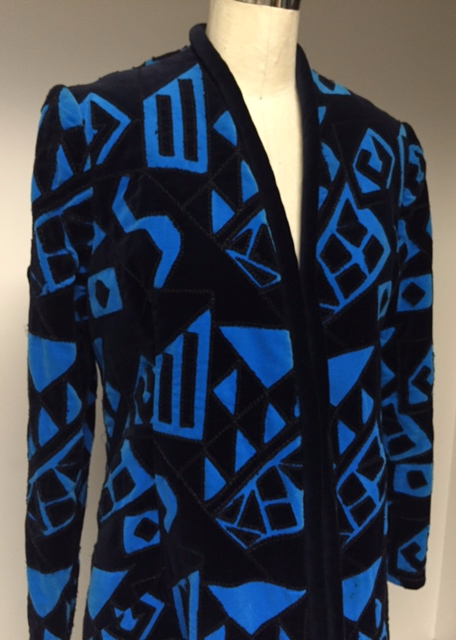 Mollie Parnis was a woman entirely of her own making. She built a profitable business that was active for over fifty years, and left a legacy of designs befitting a modern woman. She recognized the importance of having interests outside of fashion, and was dedicated to encouraging discussions about art, journalism, and politics among New York’s leaders – an effort her good friend Bill Blass called “her greatest contribution.”[7] Though this Parnis coat remains somewhat of an enigma, it reflects the artistic appreciations of a passionate woman who cultivated her own education.

If you are aware of any similar Mollie Parnis pieces, let us know! We would love to learn more about the origin of this unique design.