6 years ago Art of Motion Picture Costume Design, Behind the scenes, Costume design

6 years ago Art of Motion Picture Costume Design, Behind the scenes, Costume design

The Art of Motion Picture Costume Design exhibition always draws a range of emotions from our visitors – after all, seeing the costumes you adored onscreen in person can be an overwhelming experience. However, there's one film this year that was consistently met with awe: the exquisitely sinister costumes from Crimson Peak. Today on the blog, we are delighted to explore the story of these costumes courtesy of designer Kate Hawley, who generously shared pictures of her workroom, sketches, and mood boards that inspired the film's otherworldy aesthetic. 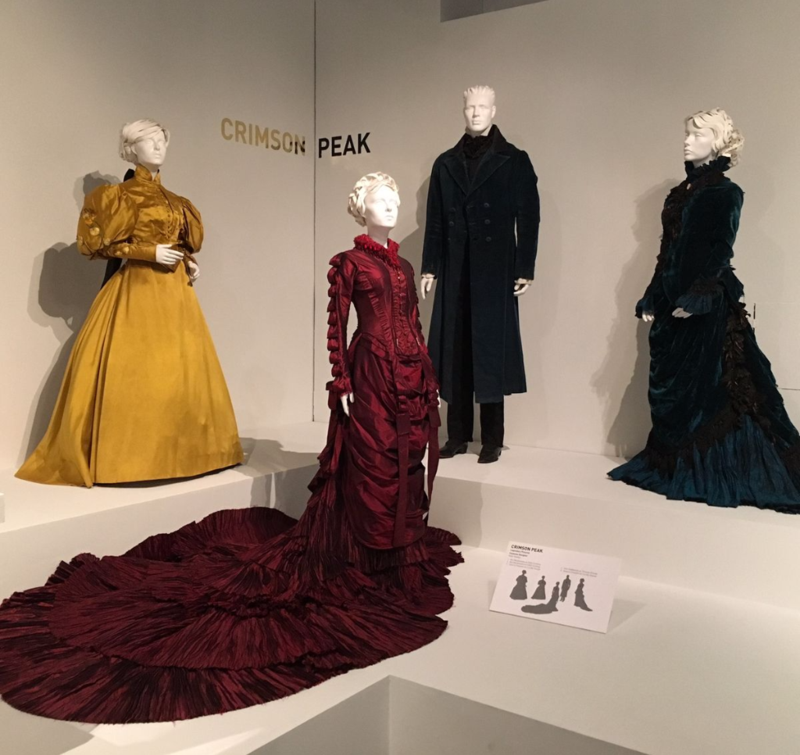 Crimson Peak is the brain child of filmmaker Guillermo del Toro, known for other macabre fantasies such as Pan's Labyrinth and the Hellboy franchise. Hawley worked with del Toro previously on Pacific Rim, and the two shared a vision for creating the haunted world of Crimson Peak – a project Hawley compared to an opera in the way the dramatic costumes brought each character to life throughout the film. The costume designer made the mood boards shared in this post after reading the script; they were her exploration of plot themes, and she used them as visual storyboards to represent character arcs. Even in the workroom, the team maintained an inspiration board with images and costume trim. 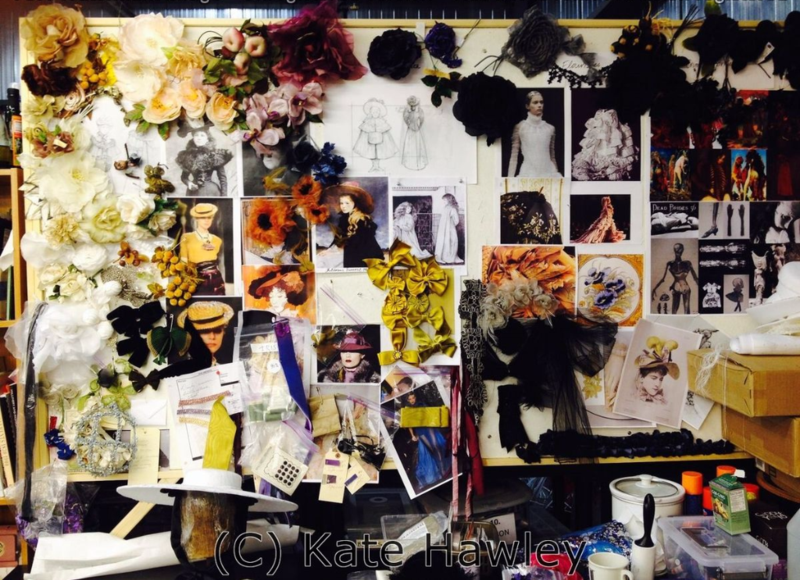 The movie, set in the late 19th century, focuses on two worlds: the bustling city of Buffalo, where young Edith Cushing meets her future husband Thomas Sharpe, and gloomy Allerdale Hall, the English estate owned by Sharpe and his sister Lucille. Hawley emphasized warm, bright colors representing life and growth for Edith's innocent character. The gold ensemble with enormous sleeves in our exhibition is seen in construction below – all the costumes were painstakingly handmade by Hawley's team (and remember that films require multiples of everything!). 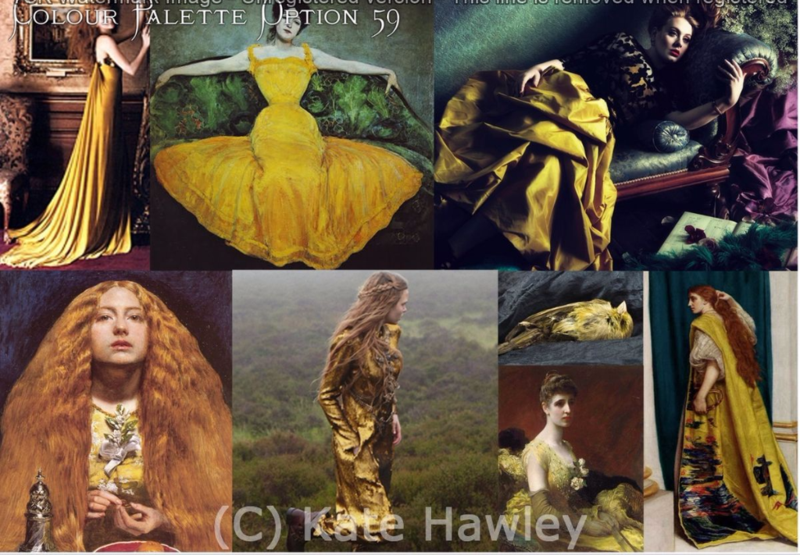 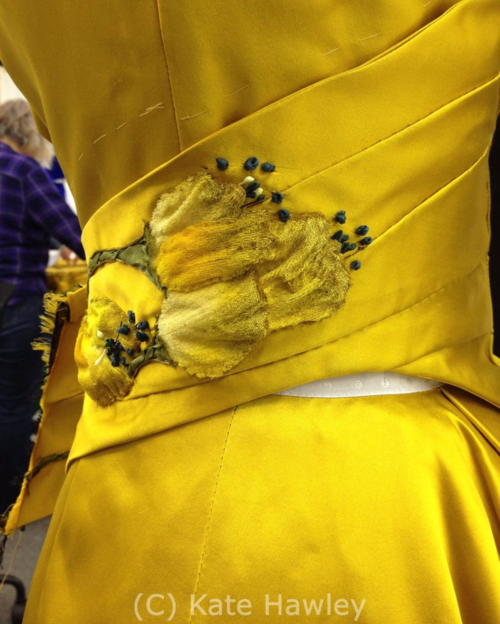 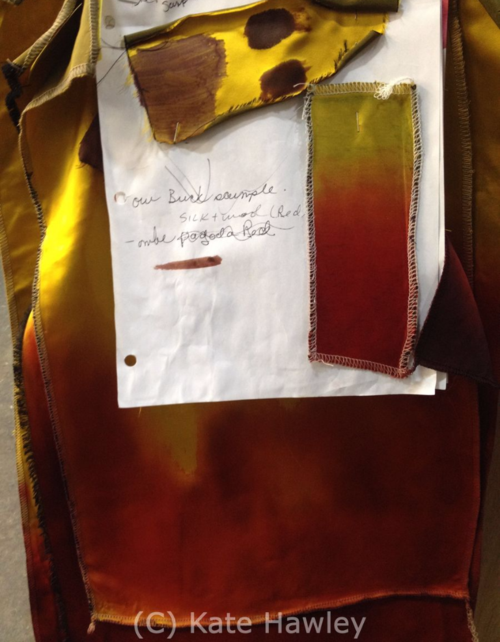 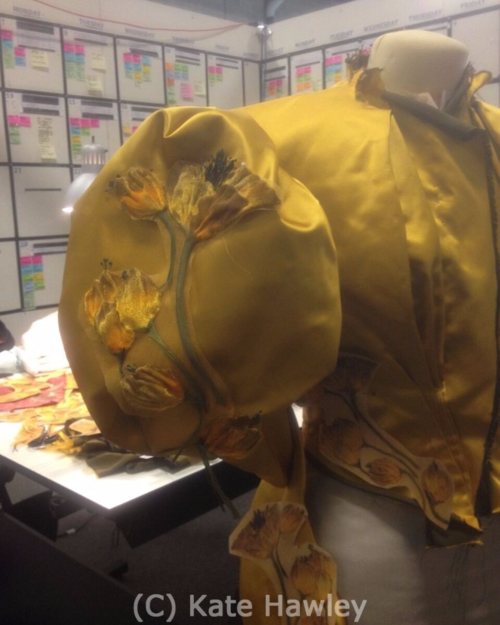 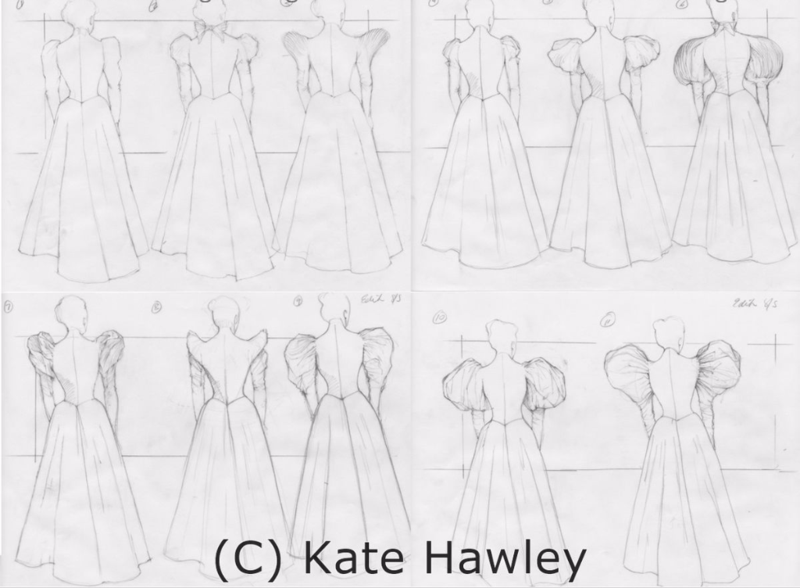 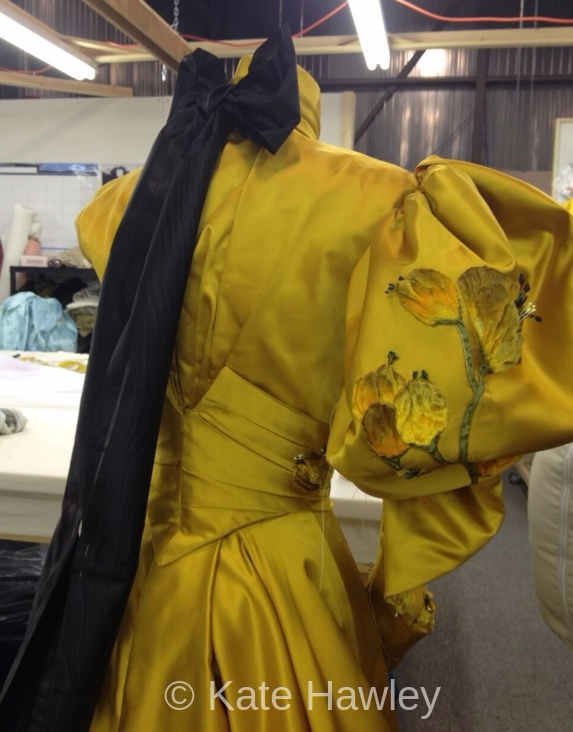 Conversely, Lucille's costumes are meant to blend with the somber, barren land of Allerdale. As Hawley describes it, Edith is the metaphorical vibrant butterfly, while Lucille is the dark moth. Again, color played an important role in the design; Hawley says that when Edith arrives at the estate, she sees her husband and her sister-in-law "in their true colors and state of decay." Lucille's costumes resemble an exoskeleton, thus making her body one with the decrepit house. Her red dress closes up the back with laces that mirror Lucille's spine, with an intricate train that gathers around her feet like a pool of blood. The blue velvet gown features black trim winding up her body like a withered vine. Hawley's team constructed the corded vine trim piece-by-piece. 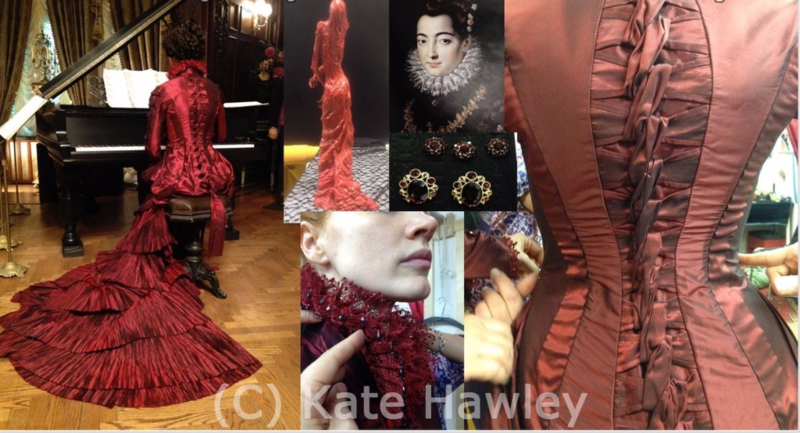 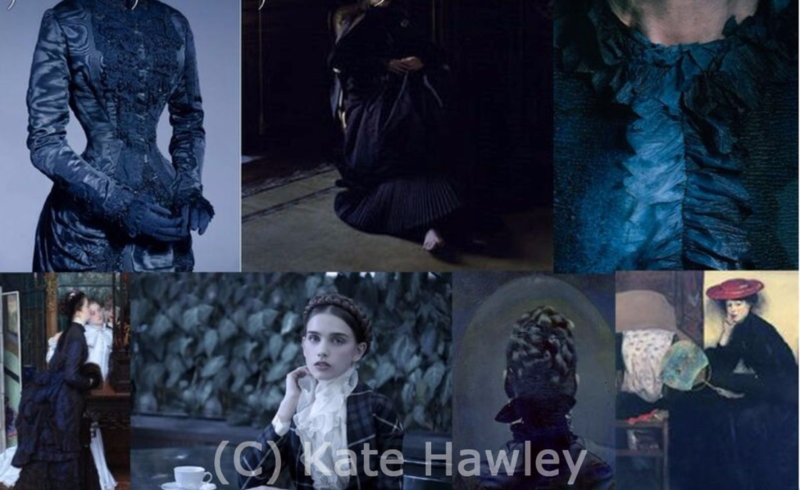 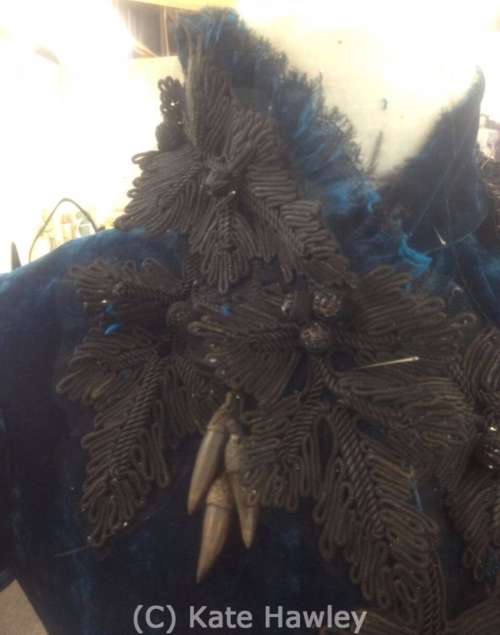 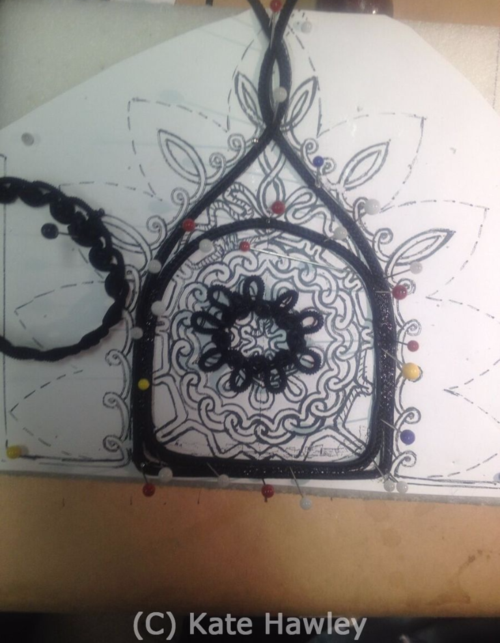 Symbolism was an essential component of Hawley's designs, as seen in the nods to Victorian mourning traditions incorporated into Edith's costumes (who mourns her mother in the film). The large scale hand belt has particularly captivated our Museum audiences; Hawley tells us she referenced mourning earrings for the design, and the belt itself was plaited from real human hair, a reference to Victorian mourning jewelry (read more about the FIDM Museum hair jewelry collection here). The hands were sculpted in wax and then cast to look like ivory. 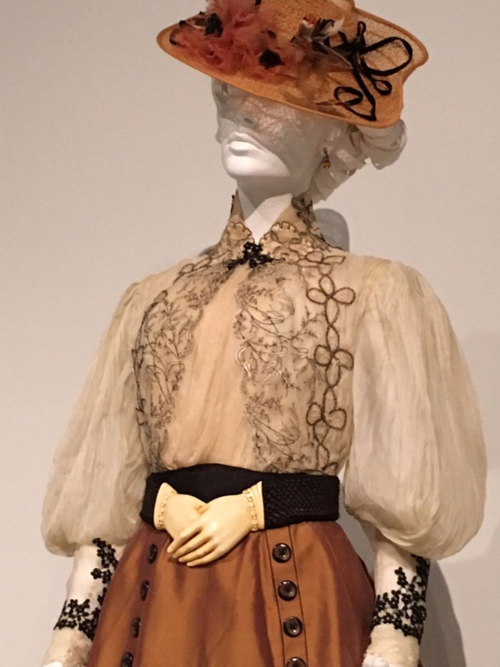 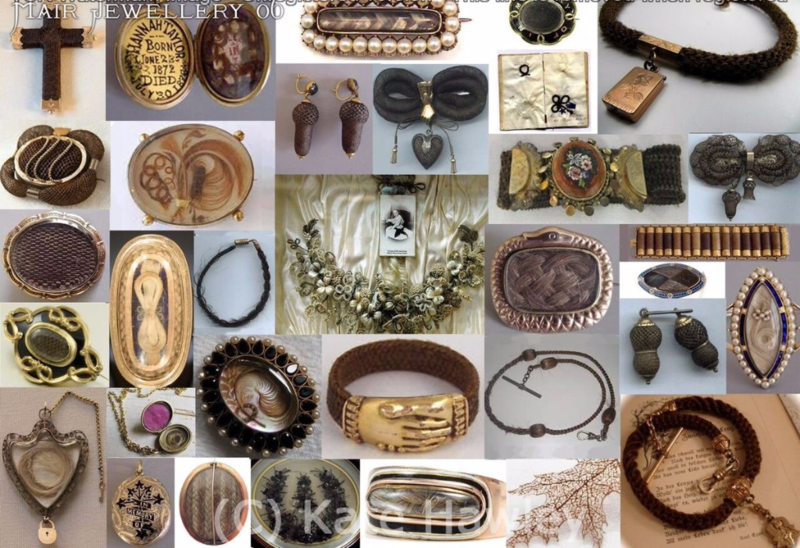 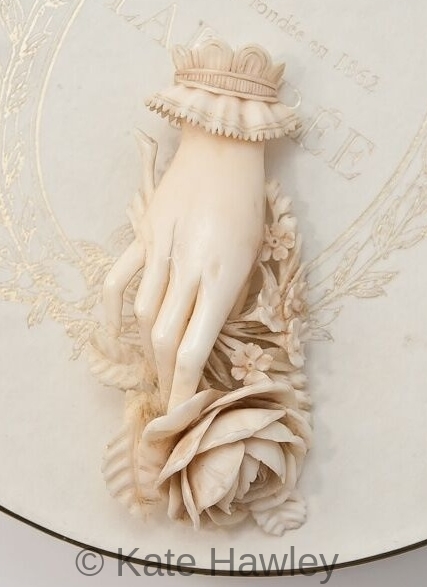 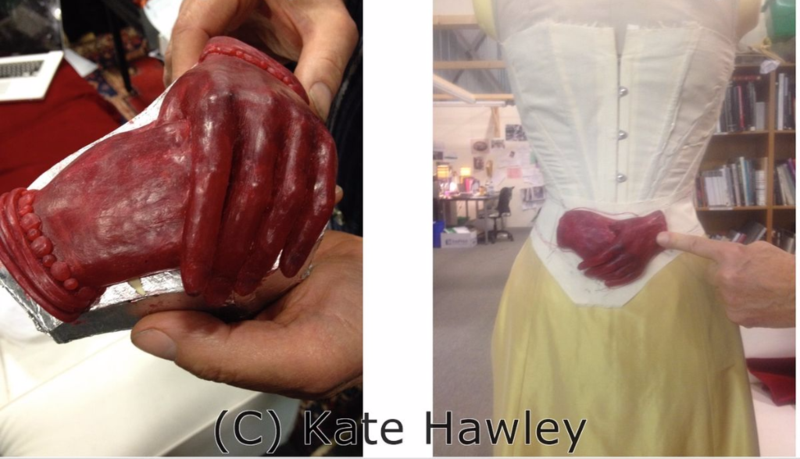 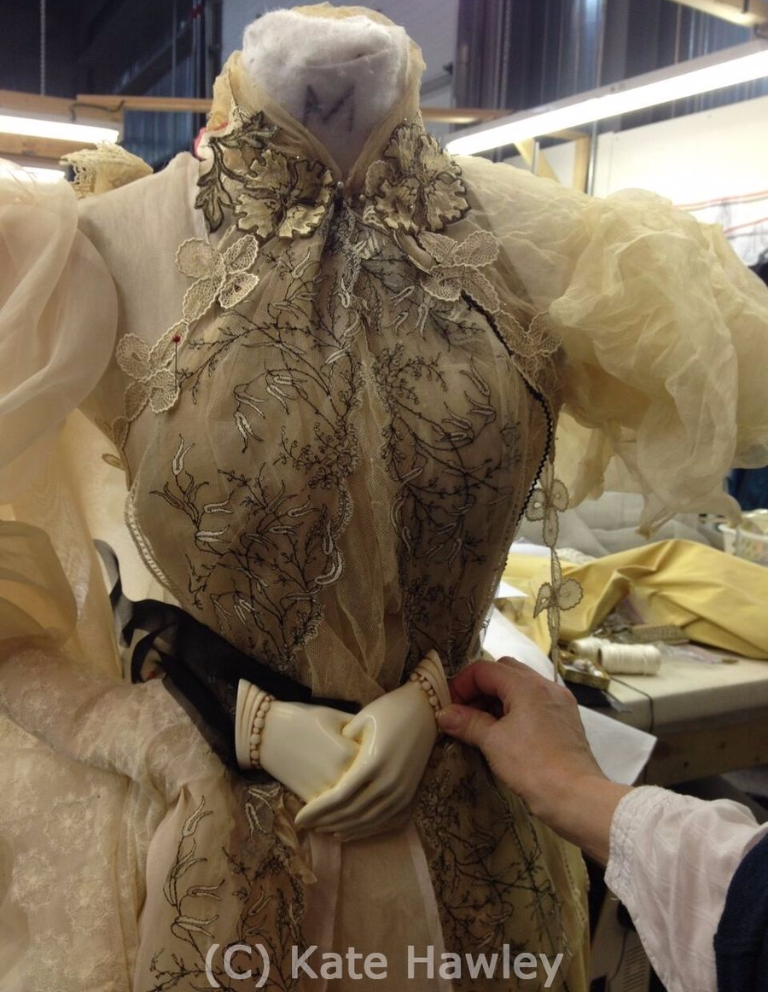 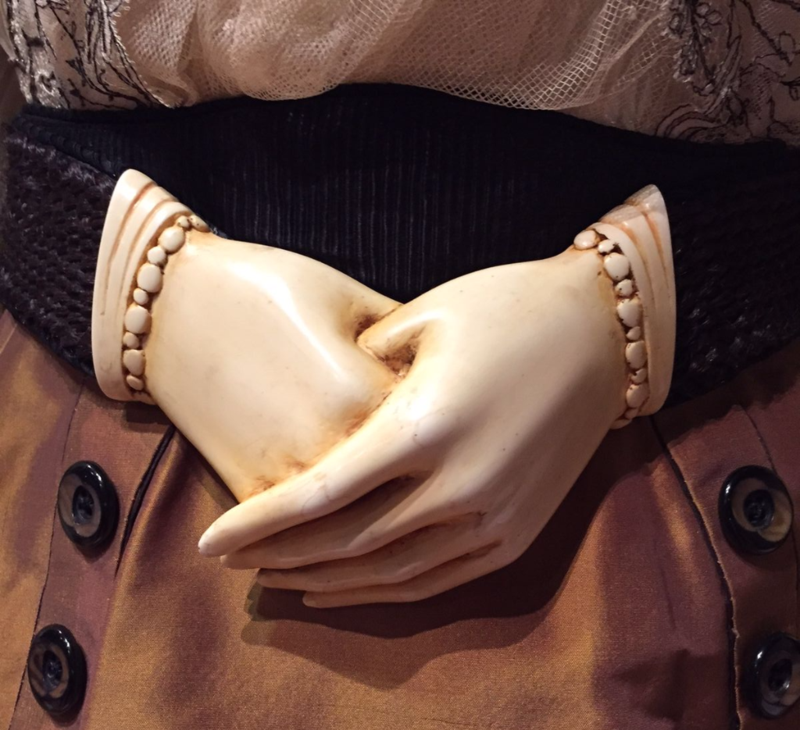 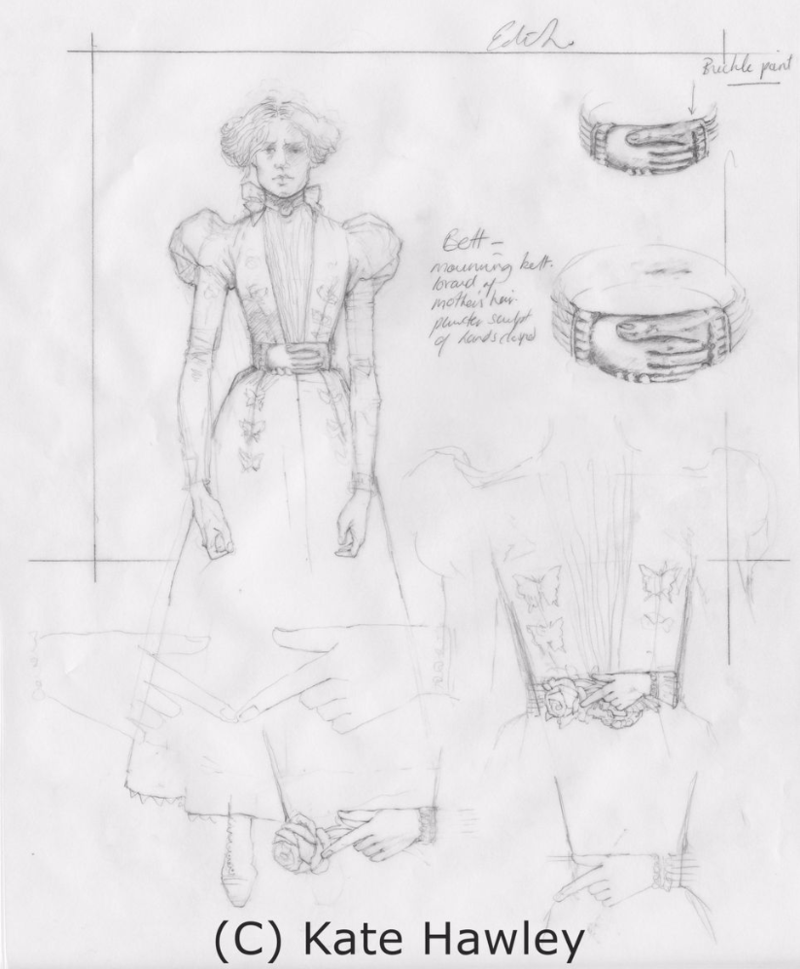 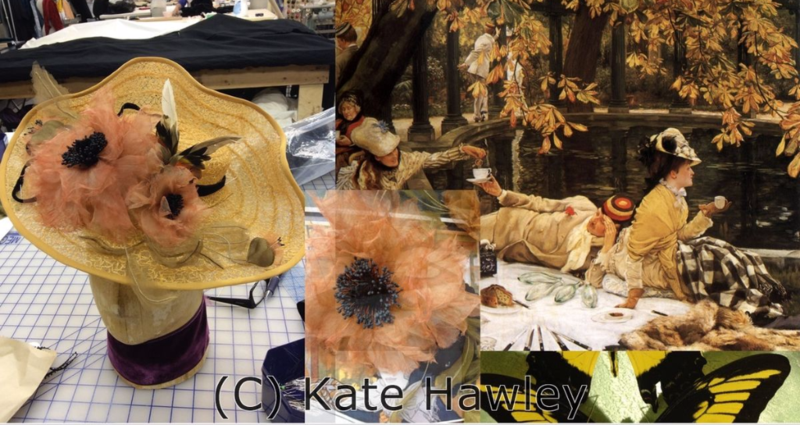 Hawley shared her thoughts behind the ghostly yet sumptuous look of Crimson Peak, stating, "I love freaking people out…but there's so much beauty and life behind what appears freaky to the modern eye isn't there?" We are so grateful to Kate Hawley for sharing these images with our readers – it gives just a glimpse into the incredible amount of work that goes into a project of this scale. Stay tuned for Part Two of our Crimson Peak coverage, where you'll learn the surprising FIDM Museum connection to the film!

3 responses to “Crimson Peak: Part One”