The FIDM Museum Special Collections hold a treasure trove of fashion ephemera. From personal and business archives to trade publications, these supplementary materials help us interpret the physical objects in the Museum's collection. Today, Registrar/Museum Coordinator Leigh Wishner, our resident textile aficionado, introduces you to a magazine that illustrates the importance of fabrics in fashion, and guided the textile industry in the mid-to-late 20th century: American Fabrics. 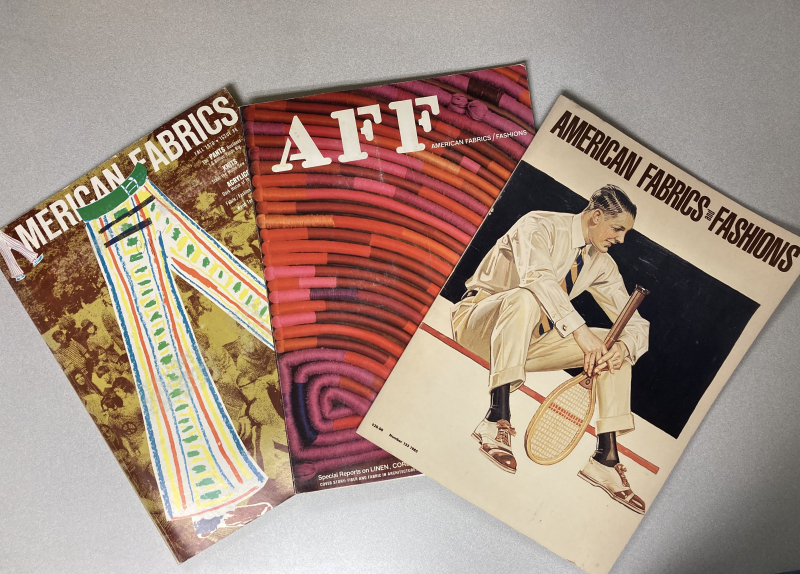 Evening gowns, cocktail dresses, business suits, casual sportswear, and athletic attire: what is the common denominator for all these forms of clothing? The answer, naturally, is textiles–but in fashion studies, textiles are surprisingly overlooked. Designers and their “signature styles” typically receive the most attention, but often, they couldn’t achieve that lauded status without choosing just the right fabric for each creation. For fashion historians, gaining insights into fabric construction and their associated uses can be challenging without the right primary source materials. Fortunately, The FIDM Museum’s Special Collections has an extensive archive of American Fabrics magazines, ranging from the 1940s to the 1980s. Each volume documents trends in women’s, men’s, and children’s fashions, as well as those for furnishings and industrial uses–all centered on the American textile industry. 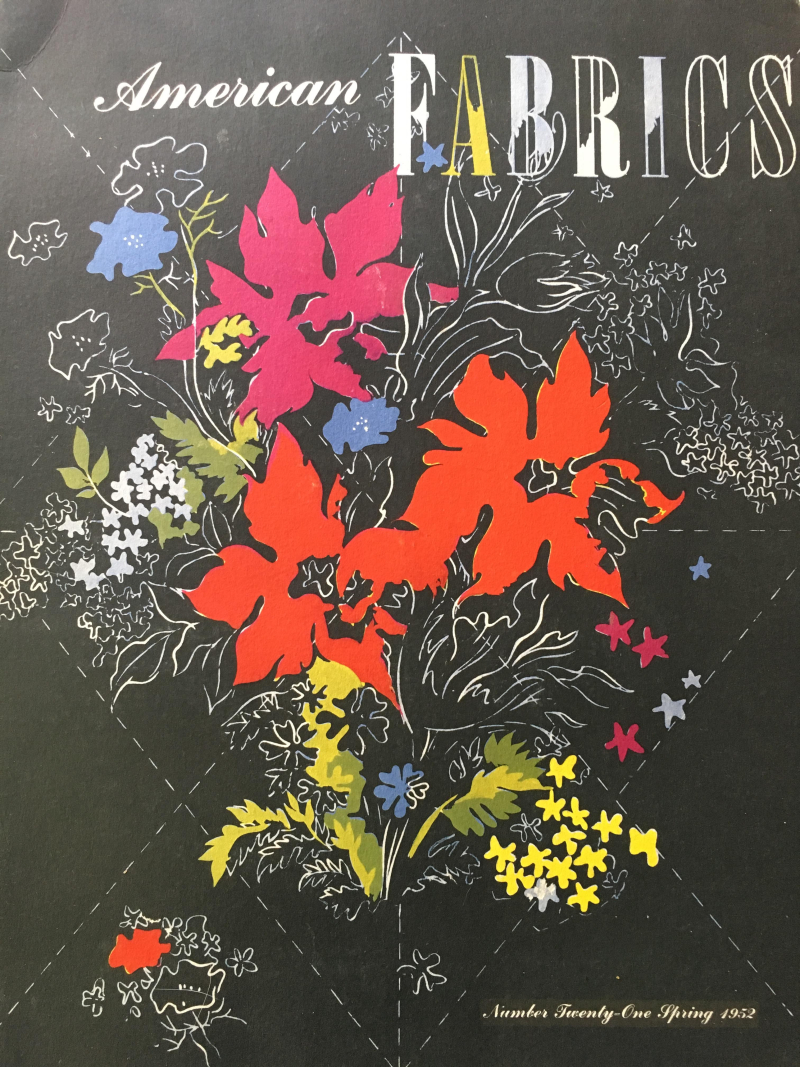 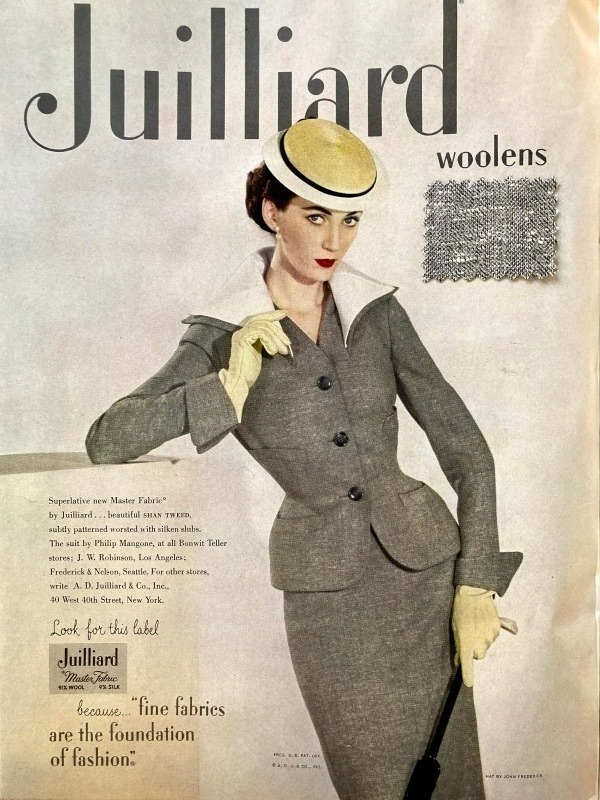 I admit: this publication is a personal obsession. Perhaps by the end of this post, it will be for you, too. I’d like to give you an overview in preparation for future posts that will highlight some of the talented stars of the American fabrics and fashion scene in the second half of the 20th century. As often as possible, I plan to make connections between what is found in the FIDM Museum collection and what is featured in the pages of this magazine. My goal? To bring fashion lovers and textile fanatics together, and underscore a registered trademark claim set forth in the magazine by the Juilliard woolens company: “Fine fabrics are the foundation of fashion.” 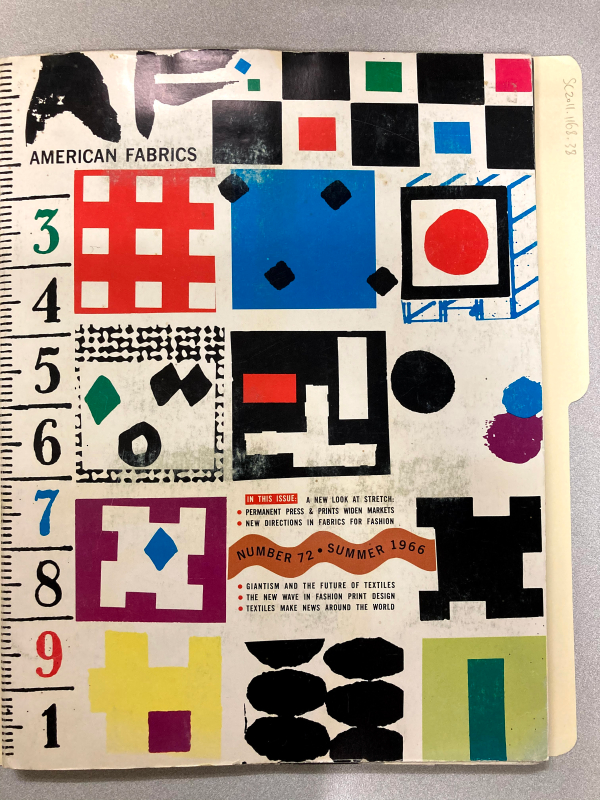 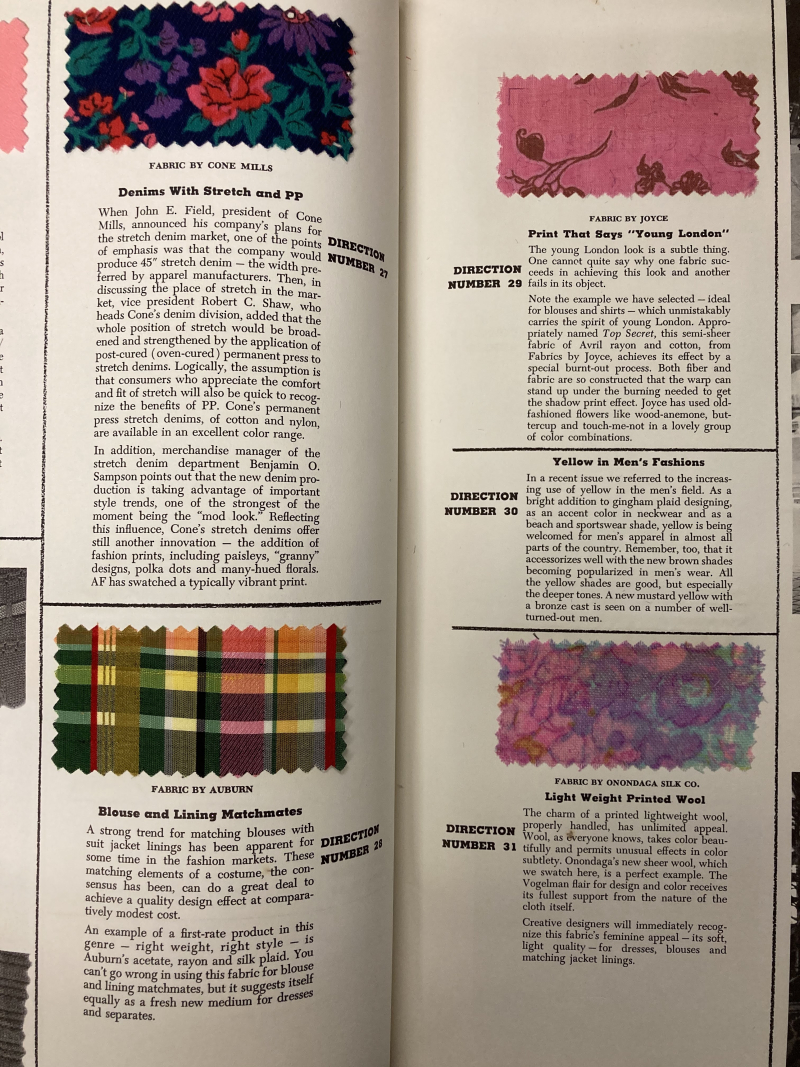 American Fabrics chronicled forty years of the textile and fashion industry in the United States and beyond. It was launched in fall 1946, and ceased publication in the fall of 1986. Through the 1970s and 1980s, the title was re-christened American Fabrics and Fashions and the variant AFF: American Fabrics/Fashion. Released quarterly, each volume was handsomely designed in an oversized format (14.5” H x 11” W) and available by subscription. “Tipped-in” fabric swatches, pasted in manually, and other supplementary materials were a hallmark of this magazine; innovative mixes of paper stock were also used for artistic effect. These features made American Fabrics an expensive publication to produce, but publisher Willliam Segal was committed to making it more than just a trade journal–he envisioned it as broadly intellectual and aesthetic. The overall “feel” of an American Fabrics magazine is eclectic, which stems from Segal’s aspirations: he practiced painting and poetry, and was intensely interested in Eastern religions and philosophies. Gentry,  Segal’s “brother” publication to American Fabrics, was devoted to mens’ lifestyle and fashions. 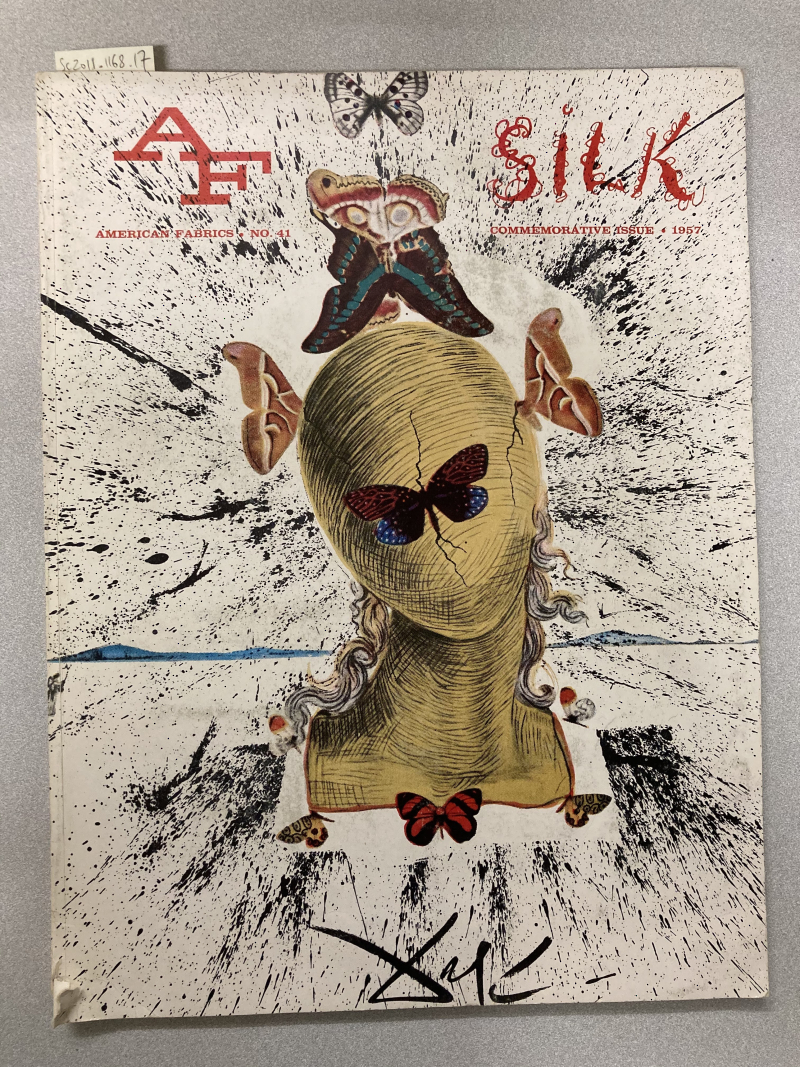 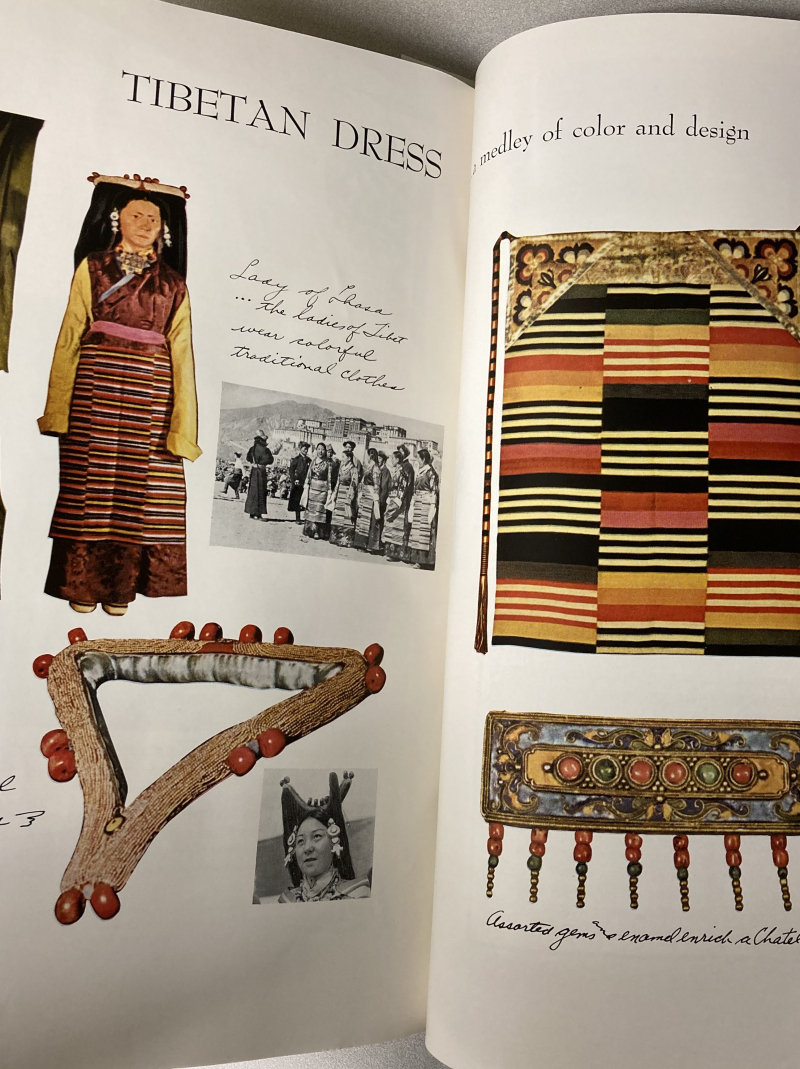 American Fabrics was first and foremost aimed at a specific trade clientele, but its mission was attuned to renaissance principles: serving as a well-rounded resource of inspiration for designers and industry leaders. Furthermore, by placing commercial textiles and fashion on a historic continuum with all arts– ancient and modern, “fine” and applied–elevated the “rag trade” to its rightful place. Covers were decorated with original artworks or reproductions of famous paintings–often, with no discernable connection to the magazines’ contents. Features like “The Consumer Wants To Know” answered practical questions posed by average readers, and detailed, scientific accounts of synthetic “miracle” fiber developments regularly graced its pages. 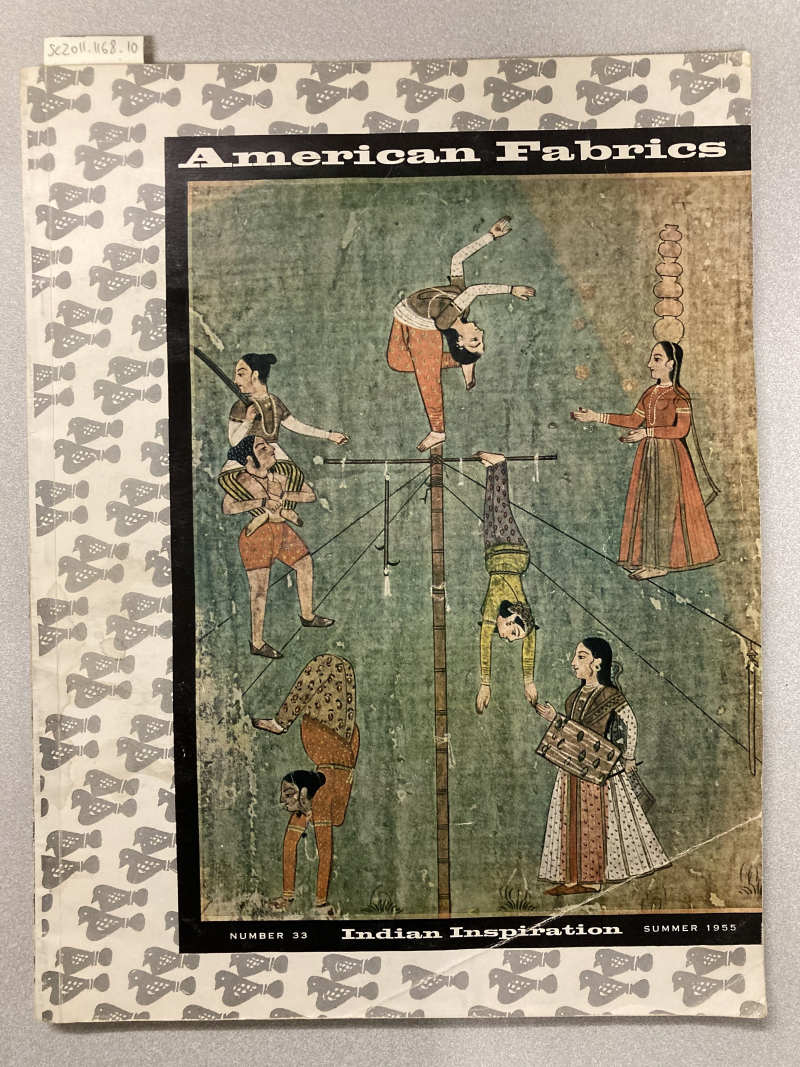 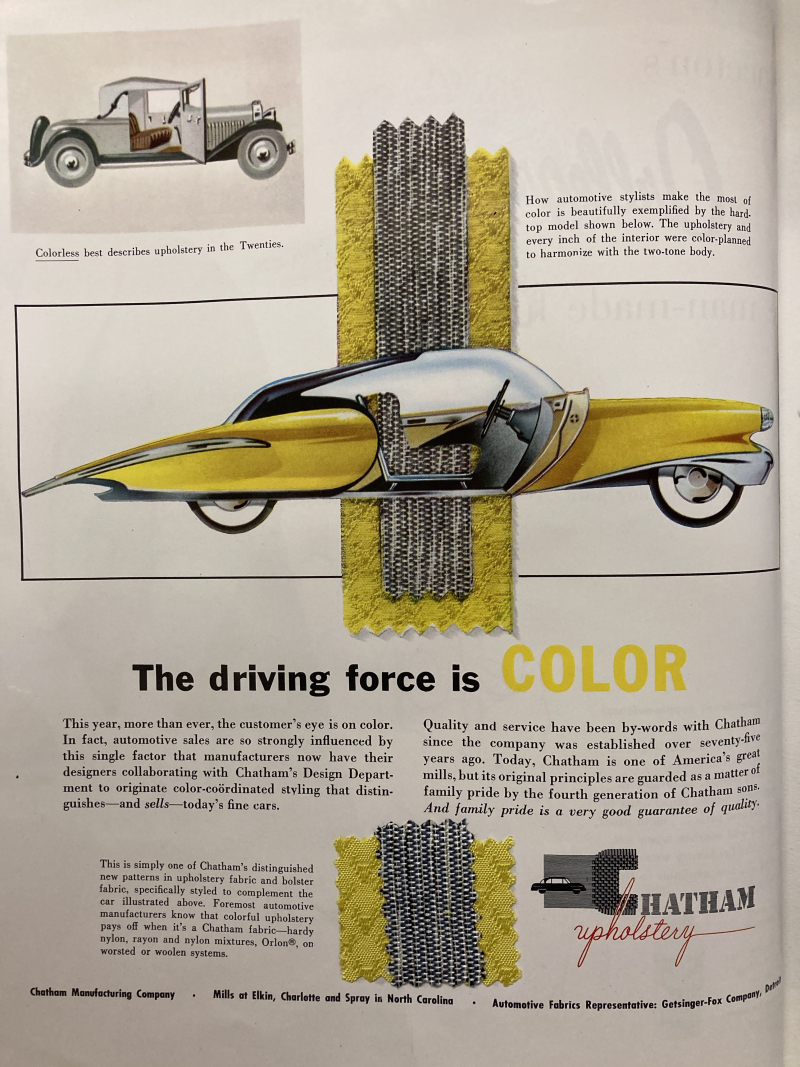 Yet, it’s surprising how much content within American Fabrics highlighted museum exhibitions and collections, art movements, ornament used in global cultures, color theory, and more.  American Fabrics provides an important perspective on fashion, interior, and industrial design in ways that weren’t as broadly covered in magazines like Vogue, Harper’s Bazaar, and Architectural Digest. Through the 1980s, fiber and fabric manufacturers also ran advertisements in fashion publications, and sometimes were given credit in editorials, but never with the same gusto, artistry, or industry focus that American Fabrics offered to its readership, which is vital to balancing scholarly interpretation of material culture. 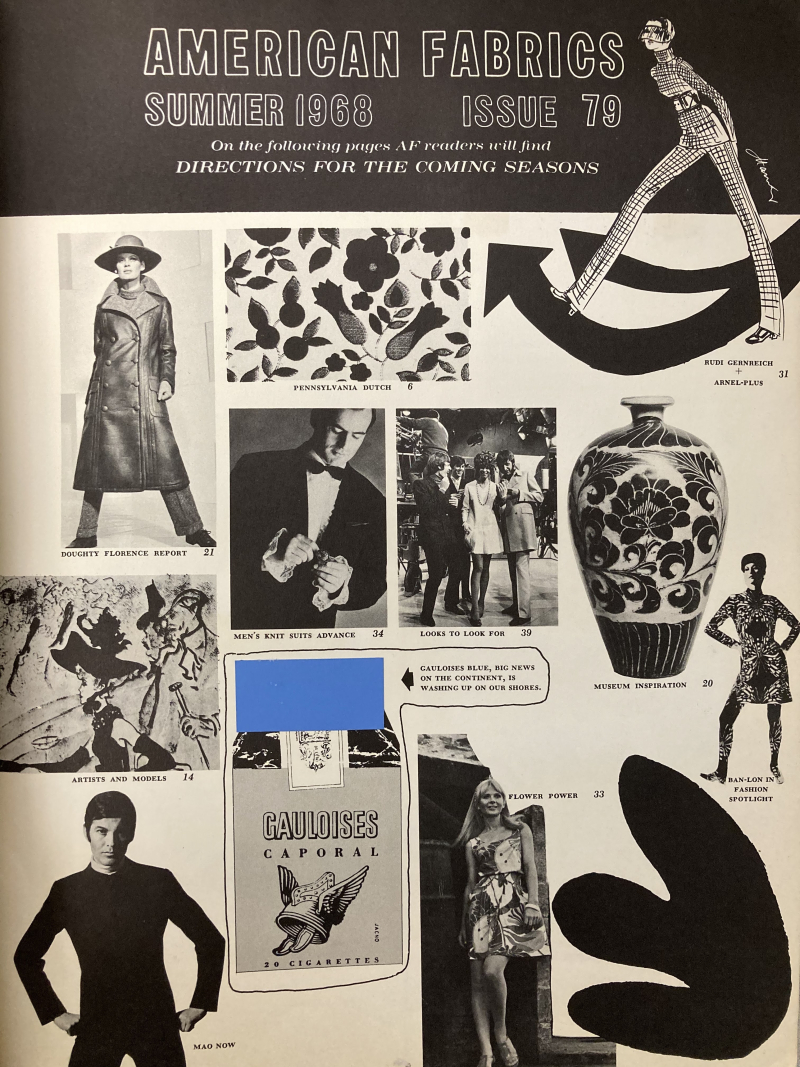 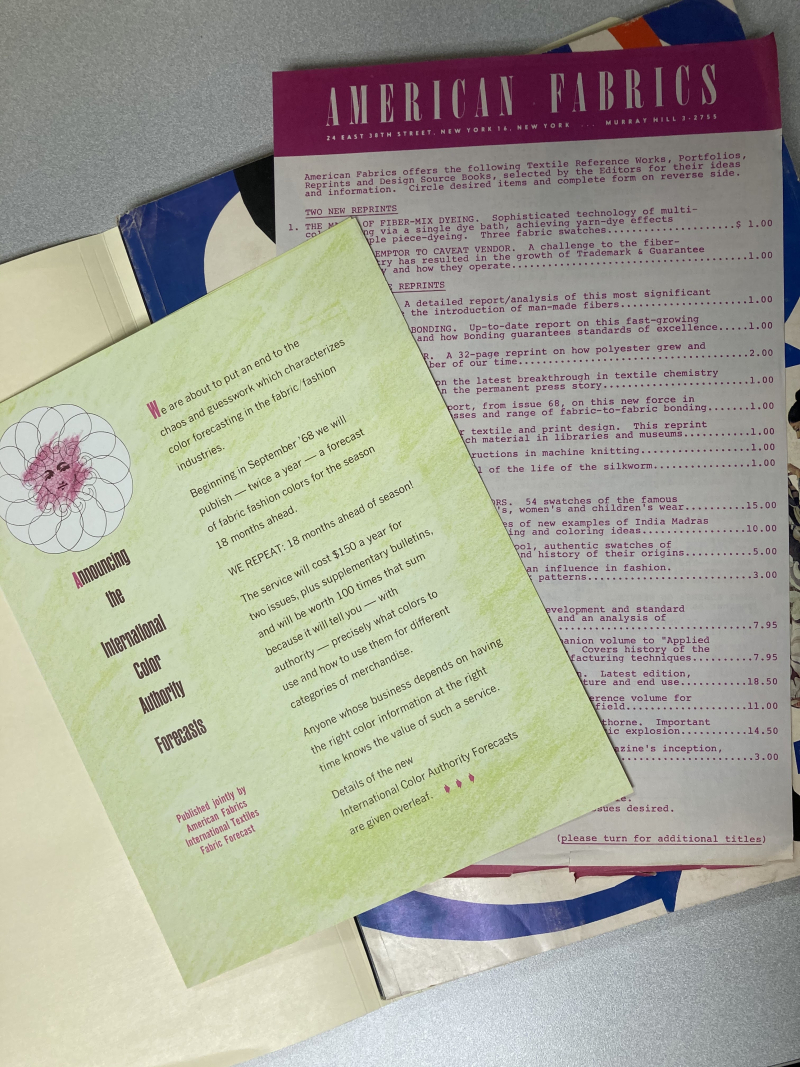 In its early years, American Fabrics did all it could to boost the profiles of home-grown textile and fashion talent, riding the wave put in motion as World War II effectively cut-off Parisian dominance in pacesetting la mode; as the post-war period blossomed into an era of international design, American Fabrics amplified its coverage with trends emanating from Europe and other parts of the world, making it a truly international endeavor. In later years, trend forecasting columns increased in volume and frequency, and tied in heavily with popular culture themes; even as the magazine evolved to be much more centered on mainstream commerce, attention was paid to counter-culture “fiber artists” and artisans than in previous decades. 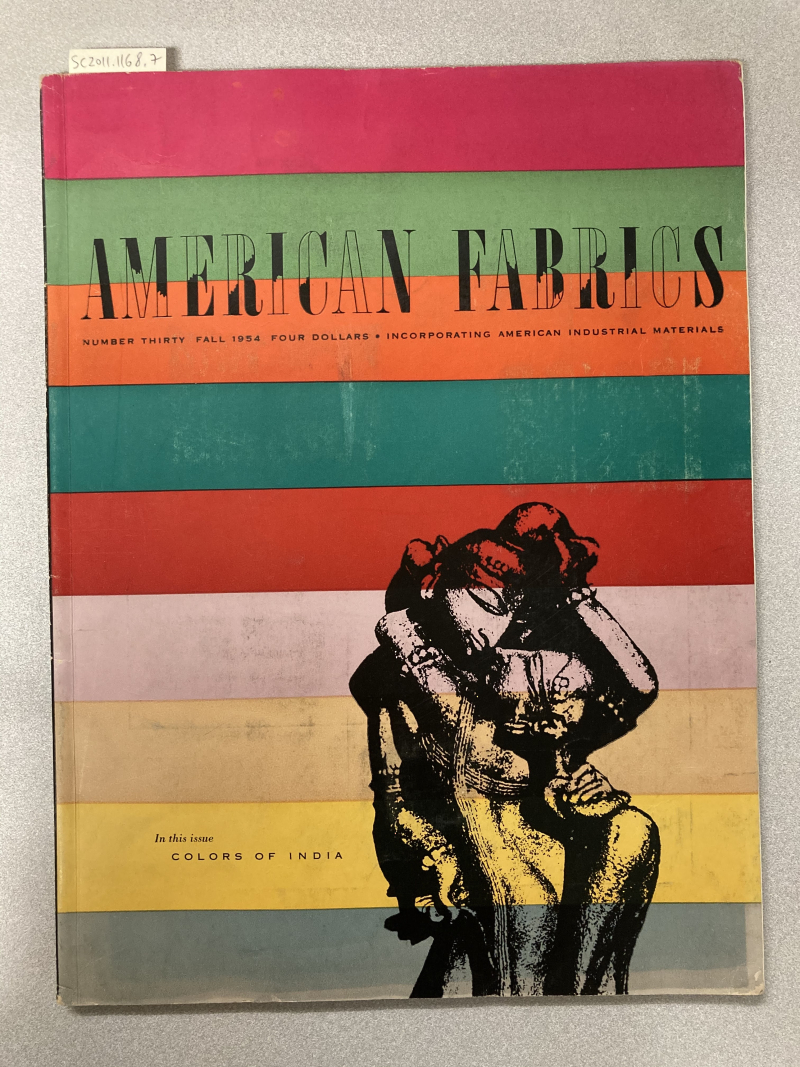 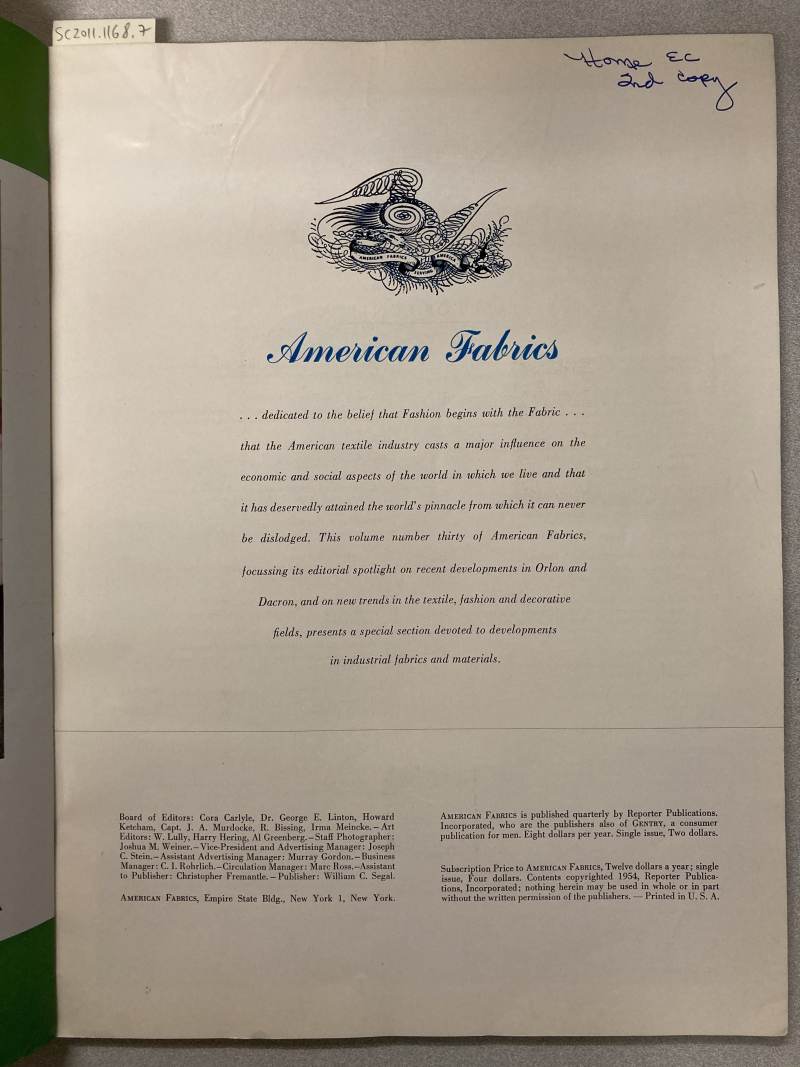 My intention with future posts on this remarkable publication is to inspire the FIDM Museum’s audience to see mid-to-late 20th-century fashion through the textile lens. For now, I’ll leave you with this, the credo that graced the magazine’s frontispiece for decades: “American Fabrics…dedicated to the belief that Fashion begins with the Fabric…that the American textile industry casts a major influence on the economic and social aspects of the world in  which we live and that it has deservedly attained the world's pinnacle from which it can never be dislodged.” Amen!

One response to “American Fabrics Magazine: An Introduction”