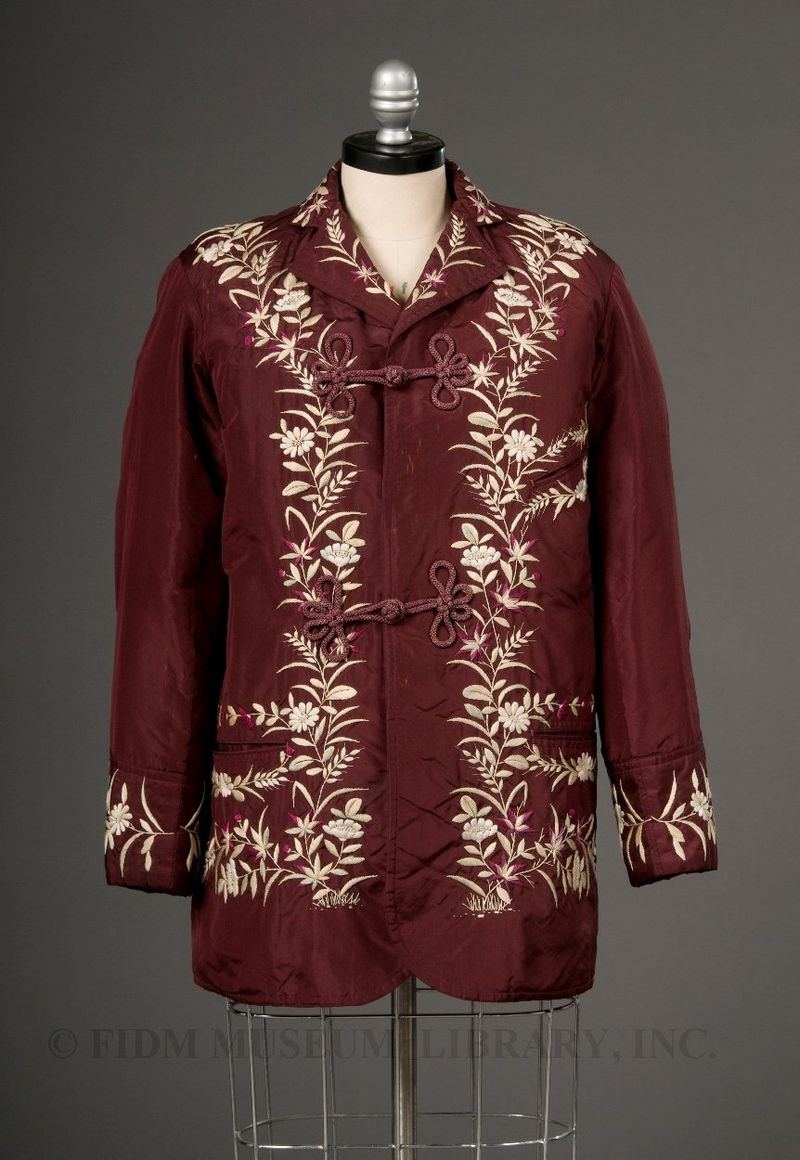 We are excited to announce that our 1880s embroidered silk lounge jacket will be featured in The Cult of Beauty: The Aesthetic Movement 1860-1900. Opening April 2 at the V&A Museum in London, this exhibition explores the arts of the Aesthetic Movement, including painting, sculpture, design, furniture, architecture, fashion and literature. We are thrilled to contribute to this exhibition! 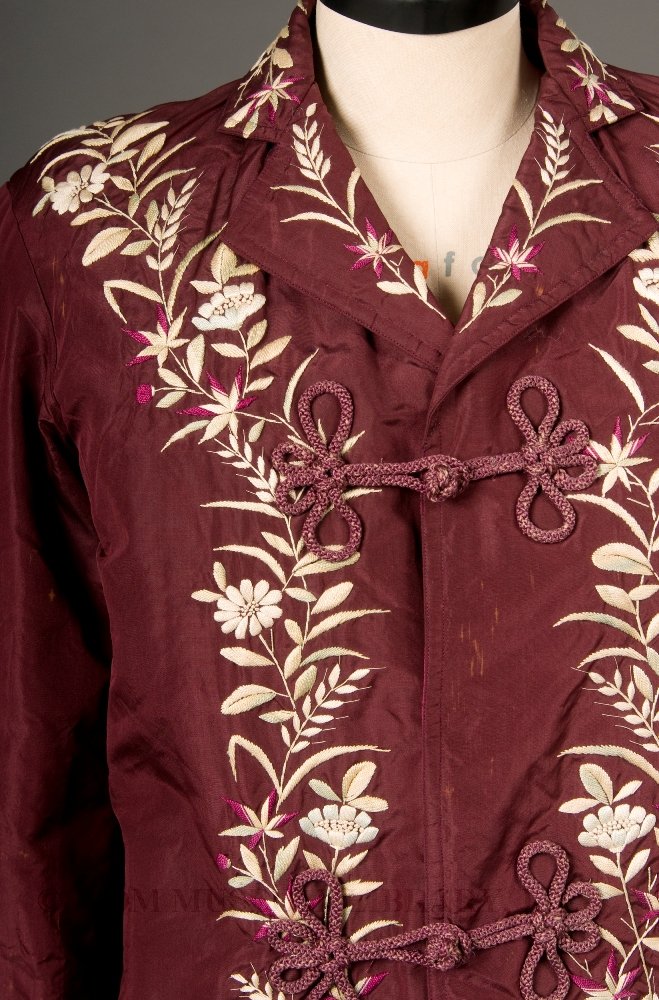 The Aesthetic Movement was a reaction against the rapid industrialization and mechanization taking place during the 19th century. Aesthetes believed that modern society encouraged, if not enforced, a standardized personal appearance. This was particularly true for men, who were expected to wear a black suit and white shirt in business and formal situations. When at play, men were able to choose from a slightly larger wardrobe which included lounge or ditto suits of checks or tweed and functional sports clothing such as the Norfolk jacket. These garments were judged on their cut and tailoring, not their decorative appeal. Oscar Wilde, perhaps the most famous male aesthete, described the lack of color and decoration in male dress during his 1882 United States lecture tour. According to Wilde, Victorian men were confined to a world of colorless, characterless dress. During his lecture he declared that "There would be more joy in life if we were to accustom ourselves to use all the beautiful colours we can in fashioning our own clothes." 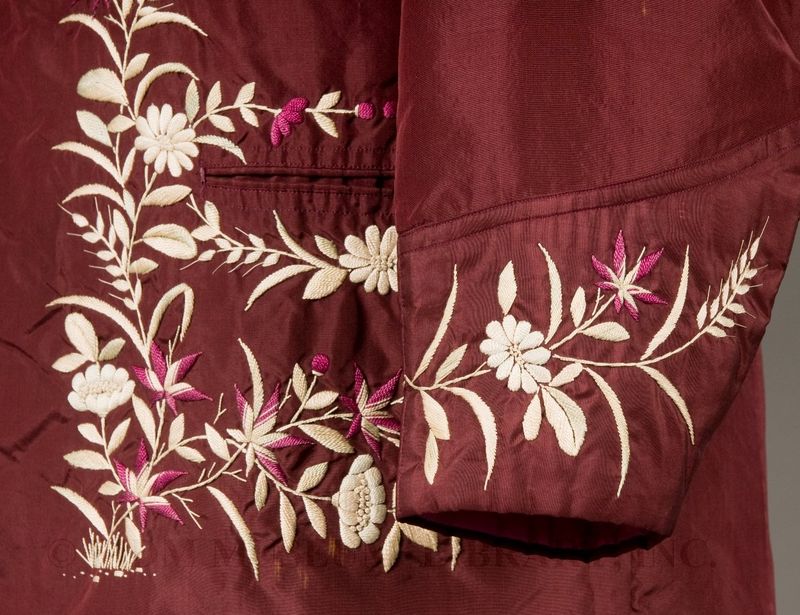 Whether worn by men or women, Aesthetic dress fit more loosely than fashionable dress. Women wore softly pleated or smocked gowns inspired by ancient civilizations or medieval Europe. Men adopted garments associated with intimate or informal situations such as the lounge jacket or artists smock. This loose fitting garments marked a rejection of the rigidity of modern society. Oscar Wilde was often portrayed with long hair, wearing a velvet jacket and waistcoat paired with knee breeches. For an age in which responsible male adulthood was marked by long trousers and short hair, this was a shocking departure from convention.

Aesthetic dressers favored a specific palette–subdued shades of pale green, soft yellow-brown and mulberry were favored. These colors were achieved using natural dyes, a reaction to the introduction of bright synthetic chemical dyes. As a group, these colors were referred to as greenery-yallery, a satirical description of their muted, sometimes muddy hues. Our smoking jacket is made of mulberry silk taffeta and lined with quilted magenta silk.

As part of their rejection of mechanization, Aesthetes appreciated and supported handcrafts like embroidery, smocking, and textile printing. In the eyes of the Aesthetes, artisan crafts were valuable not only for their visual appeal, but because they were a means by which skilled craftspeople could earn a meaningful living. These handcrafts were frequently used to create or embellish Aesthetic dress, as demonstrated by the wheat and floral embroidery on our lounge jacket. The cotton embroidery floss has faded over time; what is now white was once blue and green.

To ready the jacket for transport to the V&A, we had to create a dedicated mount. You'll remember that our Study Collection Manager Carolyn is also a gifted mount-maker. A detailed description of the mount making process can be found in our blog entry on floating forms. Below are some photos of the mount in progress. Notice all of the hand-stitching–very appropriate for a mount made for an Aesthetic garment! 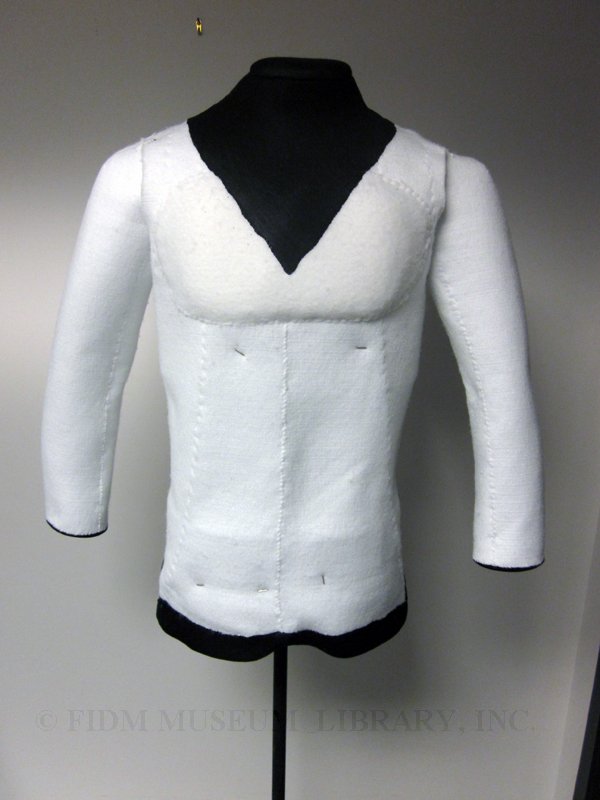 The felt layer is built over a mount of carved ethafoam. 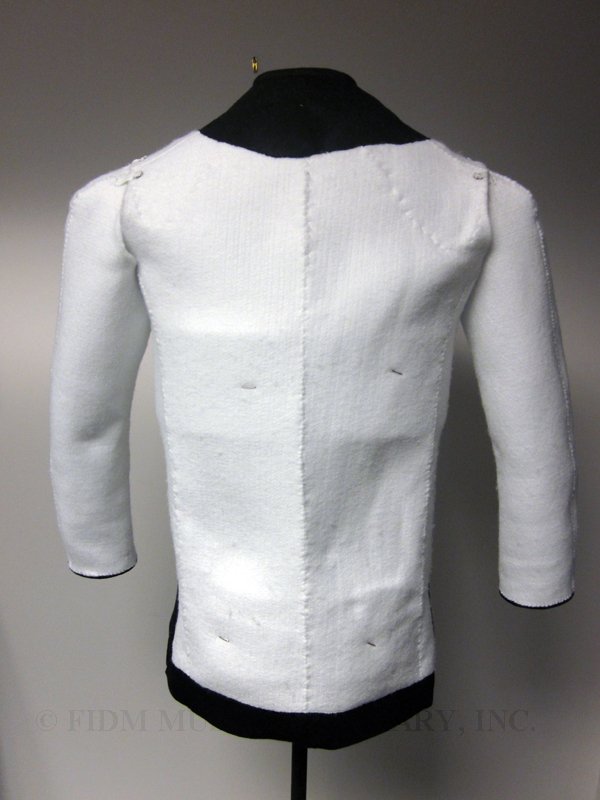 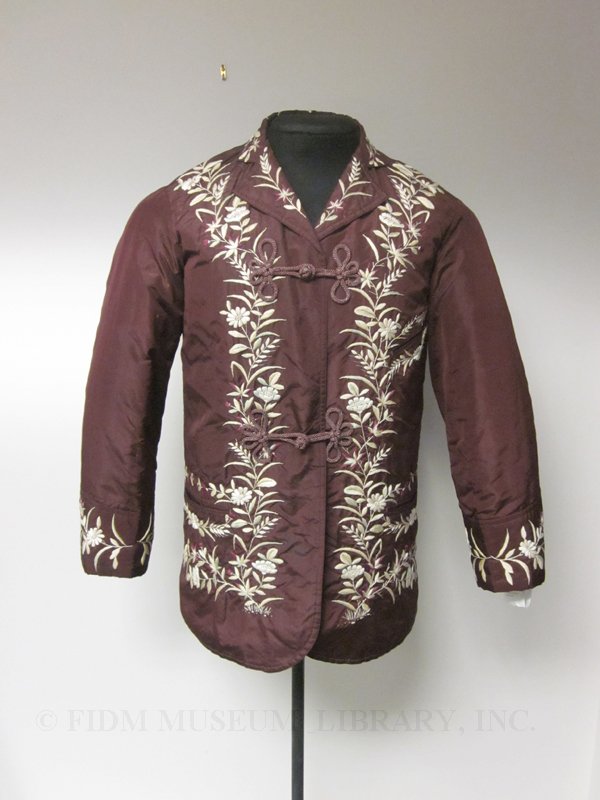 The completed custom mount supports the entire lounge jacket. Notice the difference between the shape of the sleeves above and in the first image in this entry. Though we always "dress" garments for photography, a custom mount does the best job of supporting all areas of the garment. 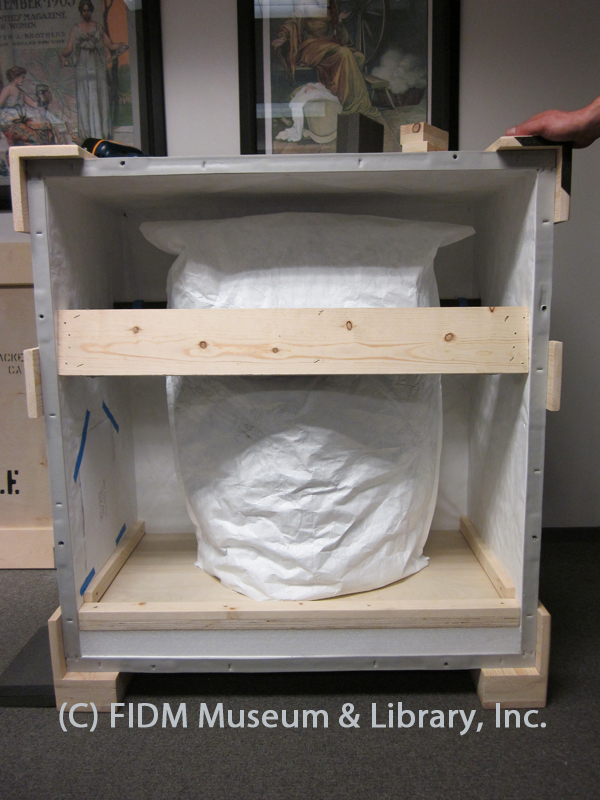 In addition to its custom mount, our lounge jacket also has a custom crate for transport. The internal ethafoam mount has a built-in gasket. The gasket is fitted over a pole, which is then screwed into the wooden tray visible above. The mount is very secure, but added foam braces at front and back keep the jacket from moving during transport.