Out & About: FIDM Museum at The Making of a Monarchy for the Modern World conference

9 years ago Behind the scenes, Conference, Court dress, Helen Larson Historic Fashion Collection, Out & About

Out & About: FIDM Museum at The Making of a Monarchy for the Modern World conference

9 years ago Behind the scenes, Conference, Court dress, Helen Larson Historic Fashion Collection, Out & About

What a busy summer! In early June, we attended the Costume Society of America symposium, which Kevin described in his recent blog post. Immediately after the conference, Kevin and Christina (our curator and associate curator, respectively) flew to London to present research at another conference, The Making of a Monarchy for a Modern World. In today's blog post, Christina takes us to London with a lively, illustrated overview of their trip, including conference details, and museum exhibitions visited. Thanks Christina! We can't wait to hear about your experiences at the upcoming Costume Colloquium in Florence, Italy.

Kevin Jones and I flew to London after participating in the Costume Society of America’s Annual Symposium in Atlanta, Georgia. We arrived on June 4—right in the middle of the Diamond Jubilee festivities! 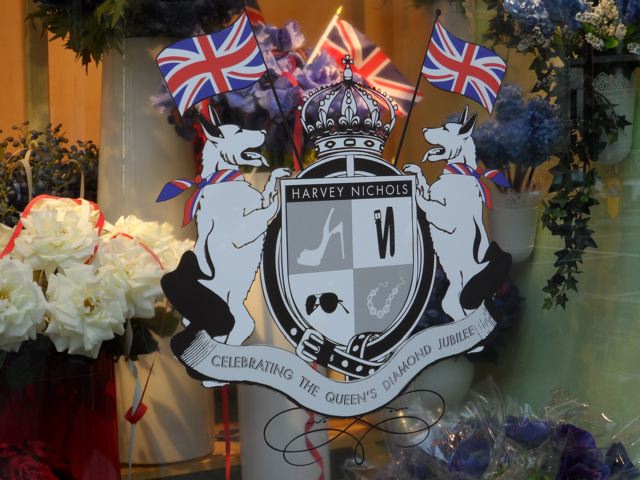 Flags and bunting were draped across the streets and buildings, windows were dressed in Union Jacks and crowns, and people crowded the parks and shops as they enjoyed time off during their bank holiday. We were there for The Making of a Monarchy for the Modern World conference, held from June 6-8, 2012, and hosted by Historic Royal Palaces. Kevin and I were two of forty-eight speakers who traveled from around the world to convene at Kensington Palace in order to explore the political ramifications, social aspects, and artistic patronage of the modern British monarchy, and what this has meant for British subjects and non-subjects alike. With us in London were Mimi Johnson and Pame Schmider– two members of the FIDM Museum Fashion Council. 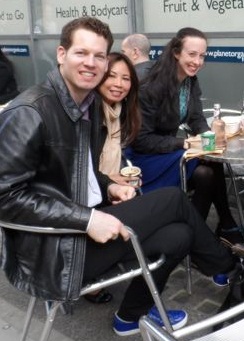 Kevin, Mimi and Christina at an outdoor cafe in London. 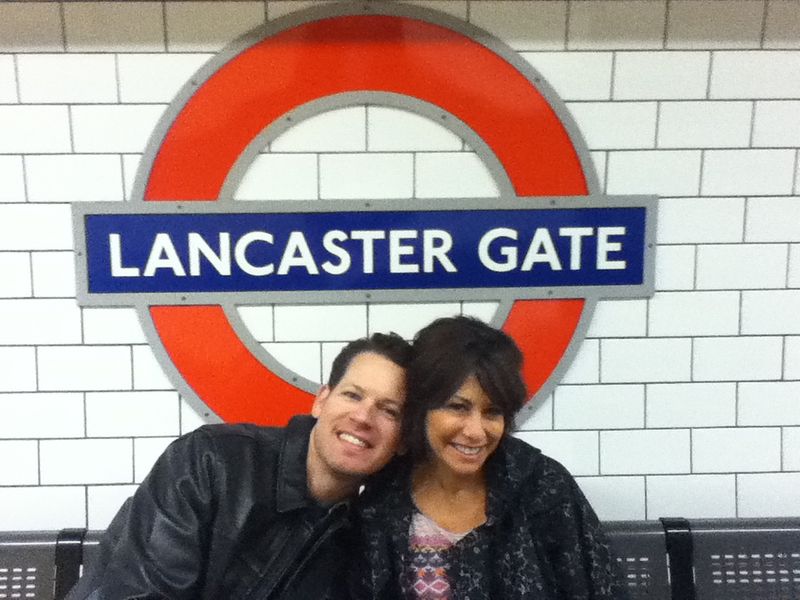 Kevin and Pame waiting for the Tube.

The day before the conference, Pame, Kevin, and I took the tube to the Museum of London. Saint Paul’s Cathedral is nearby, and the bells were still clanging from the royal family’s Service of Thanksgiving held earlier that morning! Once inside the museum, we sought out all the dresses displayed among thousands of cultural artifacts from London's many centuries of history. Drool-worthy highlights included a brocaded mantua, and the Pleasure Gardens Exhibition. We also made our way to Selfridges, which hosted Britannica 1951-1953, a gem of an exhibition celebrating the era of Queen Elizabeth II’s accession and coronation. Curated by Judith Clark, the exhibit focused on dresses re-created from commercial patterns released during the years 1951-1953.

That evening, textile dealers Junnaa & Thomi Wroblewski hosted a special dinner party for our group, and delighted us by showing rare textiles from their collection–even taking requests. They pulled panels embroidered with beetle wings for me, and Kevin requested nineteenth-century interior silks! Kevin and I enjoyed having breakfast every morning with our Fashion Council members, and on the first day of the conference, no one could contain their excitement as we ate our Weetabix and scones. It was a ten minute walk from our hotel to the Kensington Palace Orangery, where plenary lectures were held each morning. 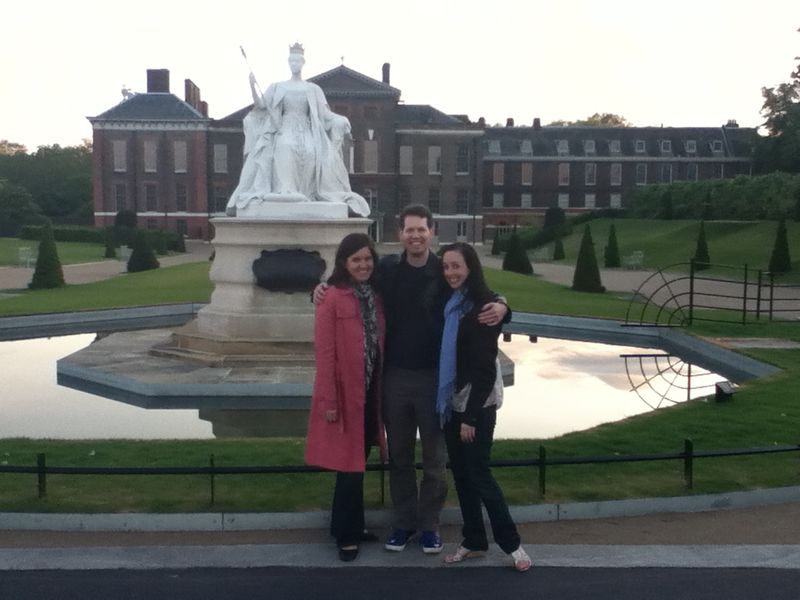 Kimberly, Kevin and Christina at Kensington Palace during the conference.

Conference participants who chose to attend the papers focused on dress and adornment (what else would one want to attend!?) then walked to the Palace to convene in a very special room—Queen Victoria’s bedroom where she was awoken on June 20, 1837 with the announcement that William IV had died, and that she was now Queen Victoria. Our conference panel–consisting of Kevin, myself, and colleagues Kimberly Chrisman-Campbell and Dale Gluckman–was on Friday, June 8. It was titled: Shedding New Light on Collecting and Interpreting Royal Dress—The Helen Larson Historic Fashion Collection. The FIDM Museum is currently fundraising to acquire this amazing collection, which includes fifty pieces worn by British royal women. Dale moderated our papers, and discussed Helen Larson and her collecting principles. I was up next, and the title of my paper was: Queen’s, Princesses, and a Commoner: Royal Dress from the Helen Larson Historic Fashion Collection. I traced the provenance of pieces worn by Queen Victoria, her children, Queen Alexandra, Queen Mary, and Mary’s daughter, Princess Mary. 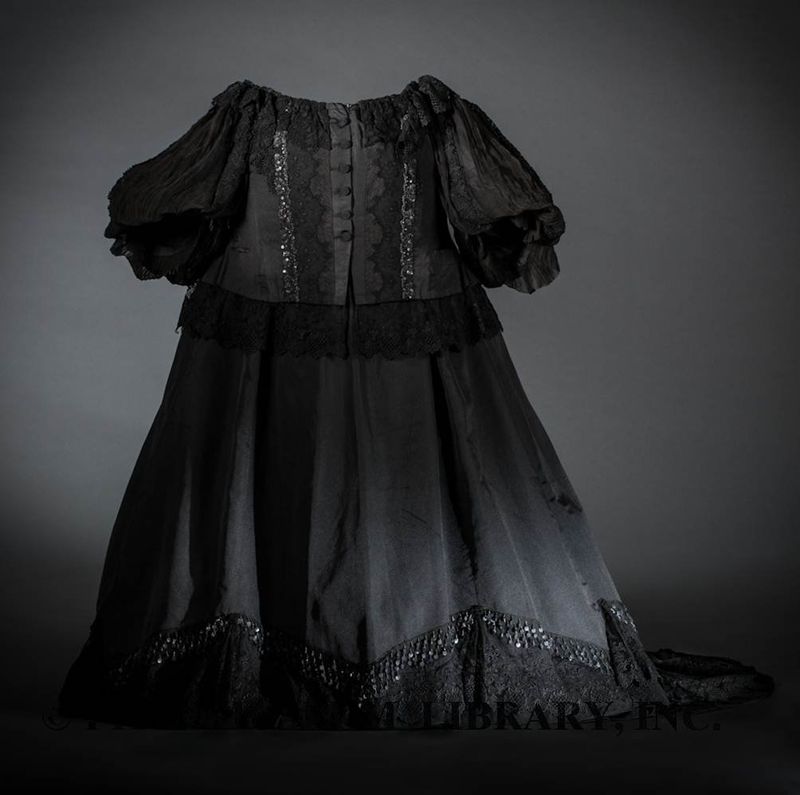 Many of the pieces came into Helen Larson’s collection by way of collector and dealer Doris Langley Moore. I was able to navigate the route from royals’ closets, to Doris’s hands and to Helen’s Whittier, California dining room table (where she opened all her purchases), thanks to the Helen Larson Papers, an historically important cache containing hundreds of letters written between the two women, as well as receipts and auction catalogues.

Kimberly Chrisman-Campbell spoke next on Diagnosing the Dress of the Queen’s Train Bearers at the Coronation of George III. Her paper focused on a court bodice worn by Lady Mary Douglas, one of six unmarried earls’ daughters who attended the Queen during the 1761 coronation ceremony of George III. 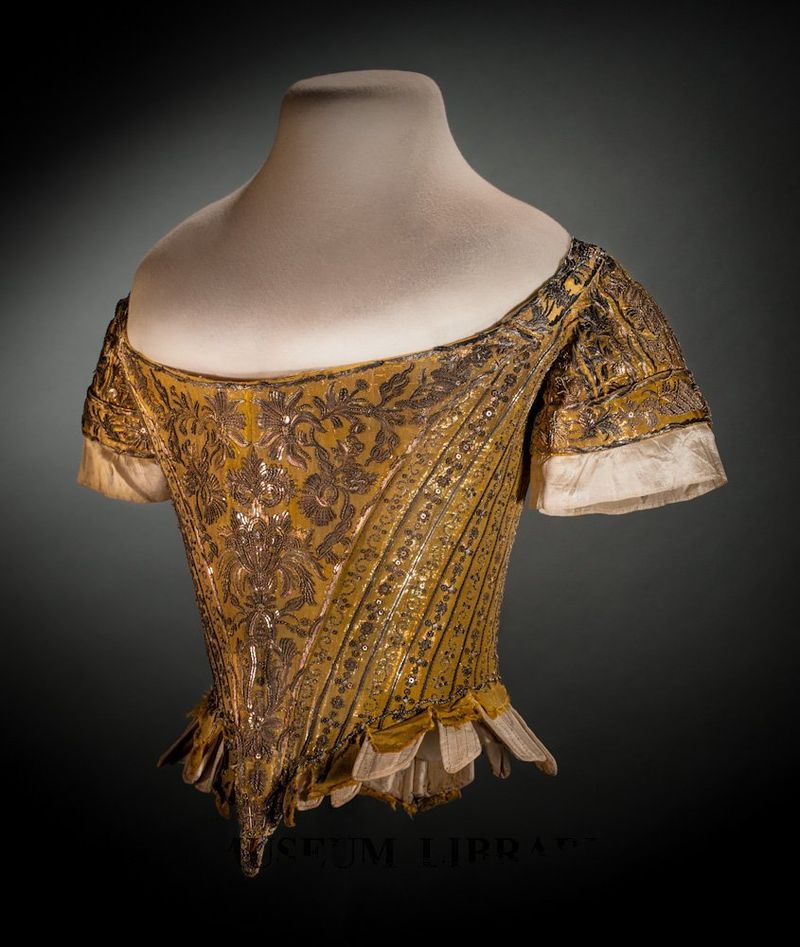 Kimberly analyzed the construction and historical context of this silver-embroidered, cloth-of-gold bodice — the only known example of English ‘stiff-bodied’ court costume to survive today. The bodice was recently x-rayed, providing more information about this truly important artifact. An exact reproduction of the bodice has been made for the FIDM Museum by historian Maxwell Barr.

Kevin Jones’s paper, Six Degrees of Separation: A History of the Princes Charlotte of Wales ‘Star of the Order of the Garter' Dress, 1816-17, concentrated on a silk gown which had been incorrectly described as being worn by the Princess’s mother, Queen Caroline. 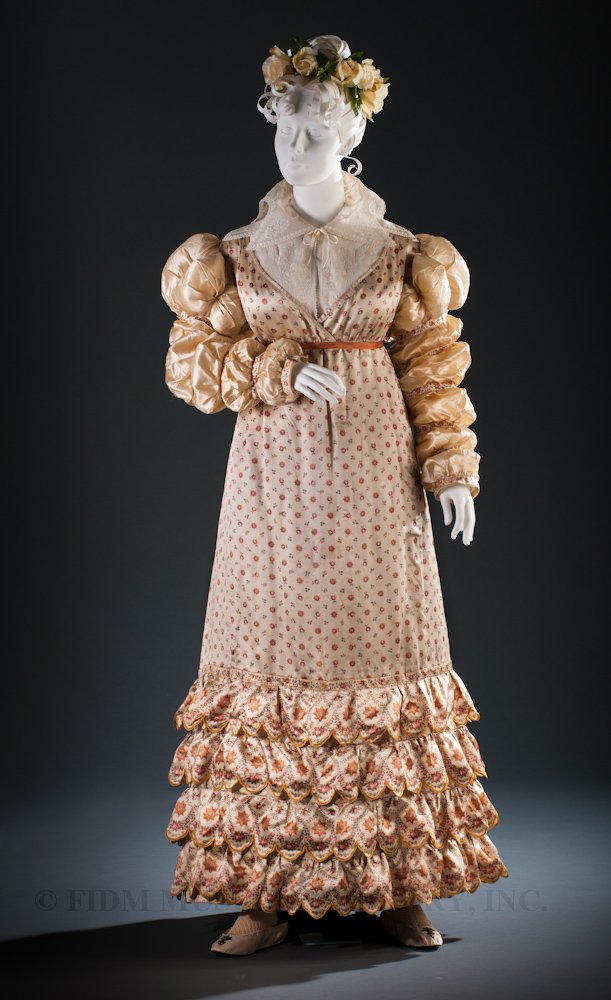 The dress is printed with symbolic imagery: roses (for England), shamrocks (Ireland), thistle (Scotland), myrtle and acorns (marital flora), as well as multiple ‘Star of the Order of the Garter’ badges—all suitable for Princess Charlotte, heiress to the British throne, and newly married in 1816. Kevin methodically traced the ownership of the dress to members of Princess Charlotte’s household, making it one of only a handful of garments with provenance attributed to this popular princess.

Kensington Palace had a number of exhibitions up during the Symposium. I was delighted by Victoria Revealed , which included Queen Victoria's wedding gown. This gown was something I have always wanted to see—a personal “Holy Grail” item if there ever was one! And FYI, the skirt pleating is perfection. Another highlight was our tour of Kensington Palace’s costume storage, where more Queen Victoria pieces had been pulled, including one of Kevin’s favorites, a silk tartan dress worn before her ascension (photographed on page 93 of Kay Staniland’s In Royal Fashion, in case you were wondering). By the way, Kensington Palace’s costume storage is currently being moved offsite because the space is being revamped into apartments for the Duke and Duchess of Cambridge—yep, William and Kate!

Kevin and I walked over to the Victoria & Albert Museum the day after the conference ended. We toured the textile conservation lab, and learned some new techniques for storing and exhibiting dress from Rachael Lee and Anna Fletcher, who work there. We viewed Ballgowns: British Glamour since 1950 and the new Fashion Galleries. Wow, what a collection!

We also visited the Fashion Museum, Bath. Doris Langley Moore (whom I have long been intrigued with) founded this museum, and it was so special to be able to walk around the town and museum where she spent so much of her life. And of course, it was amazing to be able to view objects from the Fashion Museum's collection that I have only seen in publications, like this c. 1660 silver tissue gown. Yes, I almost passed out from beauty overload! 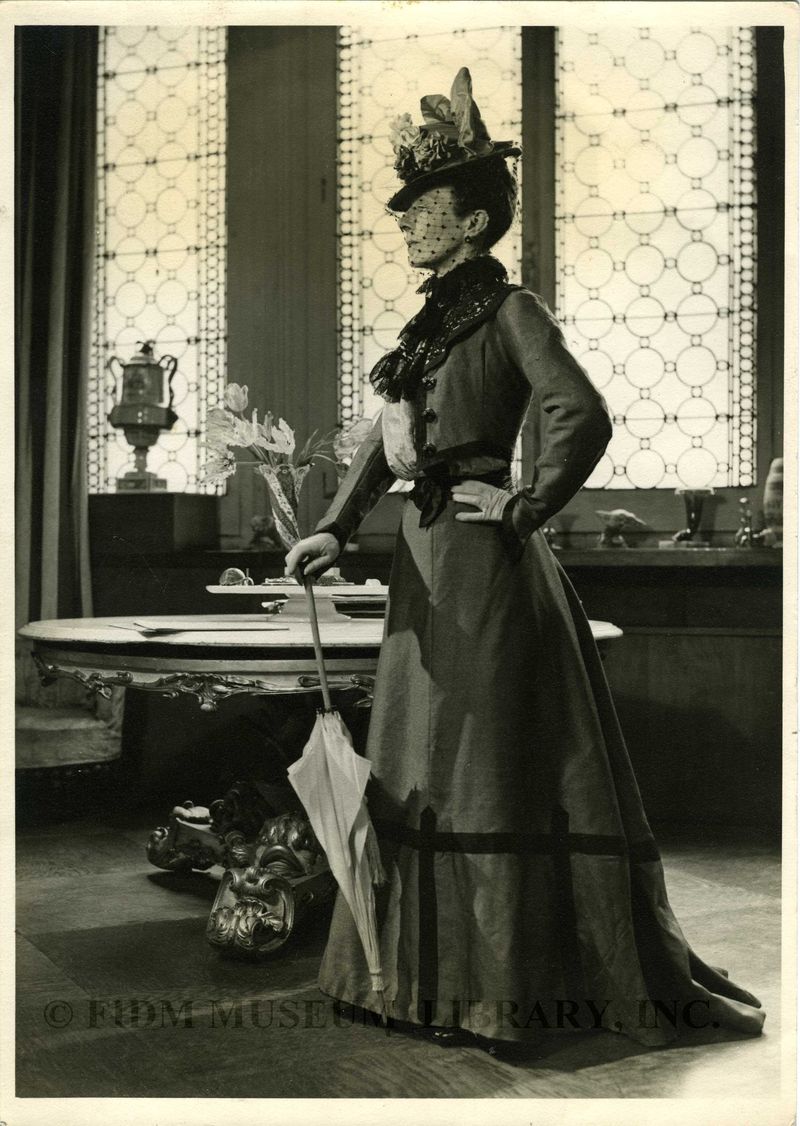 Kevin and I both noticed that many of the museums we visited  made a special effort to be inclusive of children’s learning styles in their exhibitions. Often, this was just as appealing to adults as to kids! For example, the Fashion Museum had a dress-up collection of historic reproductions. I just couldn’t help trying on this bonnet! 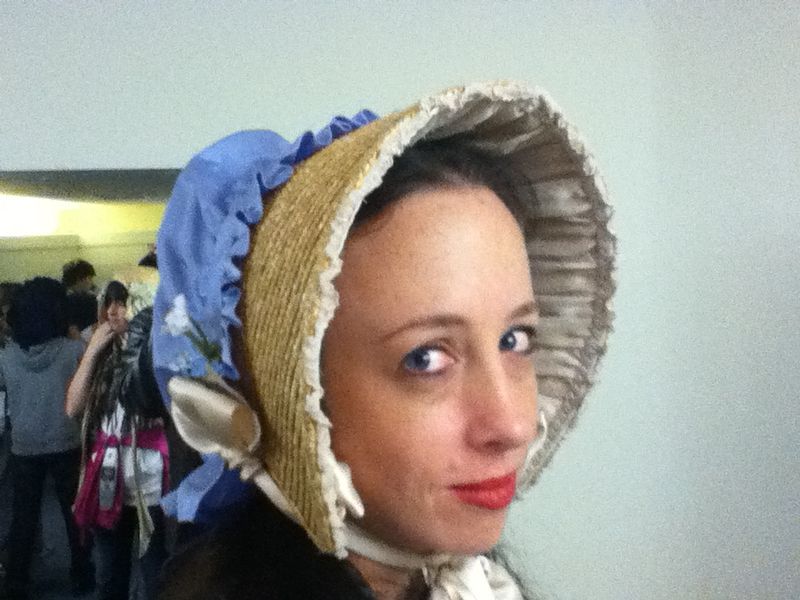 Our Modern Monarchy Symposium talks are now available for free download via iTunes, but unfortunately, there are no accompanying images. Don’t despair, we will be offering a repeat performance of our panel at the FIDM Orange County Campus, hosted by FIDM Museum Fashion Council this fall. This event will also include a gallery tour of royal garments from the Helen Larson Historic Fashion Collection. Stay tuned for more information about this exciting program!

One response to “Out & About: FIDM Museum at The Making of a Monarchy for the Modern World conference”