In today's blog post, former intern Mari Ogino uncovers the political implications of Rudi Gernreich's Kimono dress. She traces the ways in which the undefined shape of the kimono helped liberate western women's bodies from confining garments in the late 19th century and ties this into Gernreich's interest in physical and mental liberation. Thanks for a great post, Mari!

People will try to say that I want to make women look masculine. To me, the only respect you can give to a woman is to make her a human being. A totally emancipated woman who is totally free.—Rudi Gernreich1

Rudi Gernreich openly shared his socio-political views and reinforced his politics through his designs. His infamous Monokini is a pair of briefs with a strap that attaches from the front of the brief and wraps over the shoulders, revealing the wearer’s breasts. Through this garment, Gernreich attempted to address the stigma of a naked body, to "cure our society of its sex hang-up."2 Gernreich's caftan addresses gender equality by covering up the body, making it difficult to discern whether the wearer is male or female. 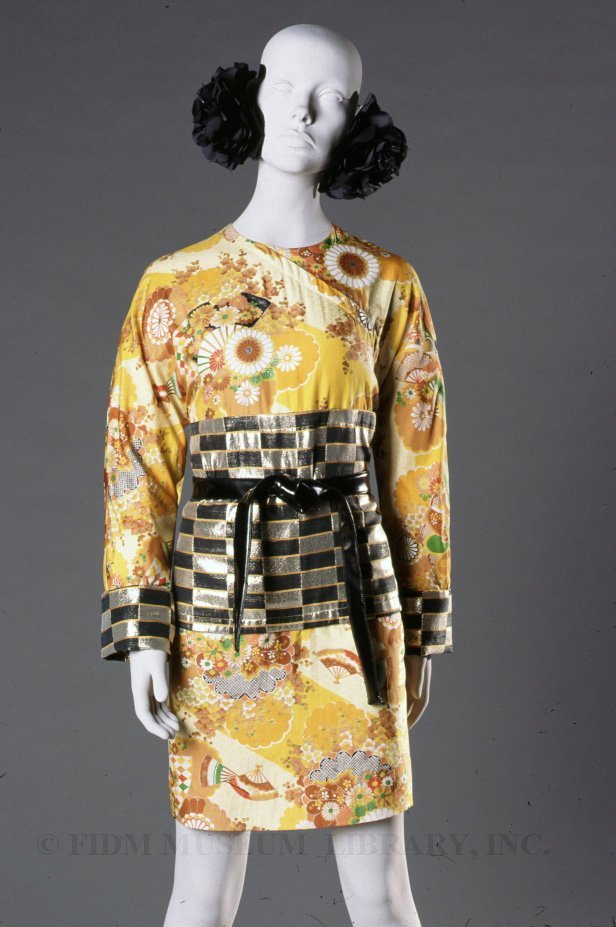 The Monokini and unisex caftan were bold in both design and cultural statement. Another provocative Gernreich design was the Kimono dress, which was equally daring, if not quite as controversial. A Kimono dress at the FIDM Museum falls above the knee, and is made of a variegated yellow fabric printed with Japanese motifs such as cherry blossoms, fans, chrysanthemums, and seigaiha (geometric wave patterns). The long sleeves end with vinyl gold and black lamé cuffs. The waist is covered with the same gold and black lamé to match the cuffs; above that is a thin black belt made of vinyl. The black and gold lamé over the waist is meant to resemble the obi (sash) of the traditional kimono and the thin black belt resembles the obijime, which helps hold the obi in position. See here for a diagram of the kimono, including the obi and obijime. 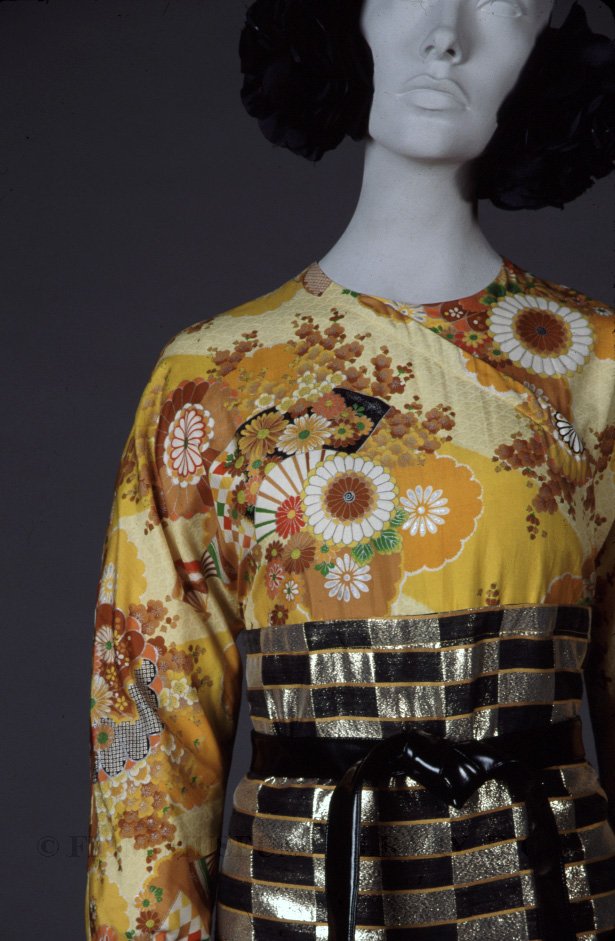 How does a moderate, less radical outfit, like this dress, continue Gernreich's proposed dialogue of liberating the female body and creating equality between the sexes? It is through the appropriation of, or "edit" (as Gernreich liked to say), of the kimono that he explored the ideal of equality.3 Since its introduction into Western wear, the kimono has been a symbol of Japanese culture, however, its appropriation into Western wear subtly carries a legacy of liberating the female body.

The kimono was first introduced to Europe and the United States in the late nineteenth century. At that time, women's range of motion was limited by bustles, corsets, and large skirts. During the same period, the Arts and Crafts Movement gained momentum in England. The Arts and Crafts movement aspired to create handmade works that embodied simplicity, utility, and comfort. A new silhouette was developed during the 1870s that embodied all these ideals, known as Artistic Dress. These new garments were inspired by the kimono and its use of long modular panels, loosened sleeves, and waist.4 This loosened fit reduced physical restrictions normally caused by corsets, tight bodices, bustles, and floor-length skirts. The women associated with the Arts and Crafts movement were freed from the confines of their clothing and were able to move about independently. 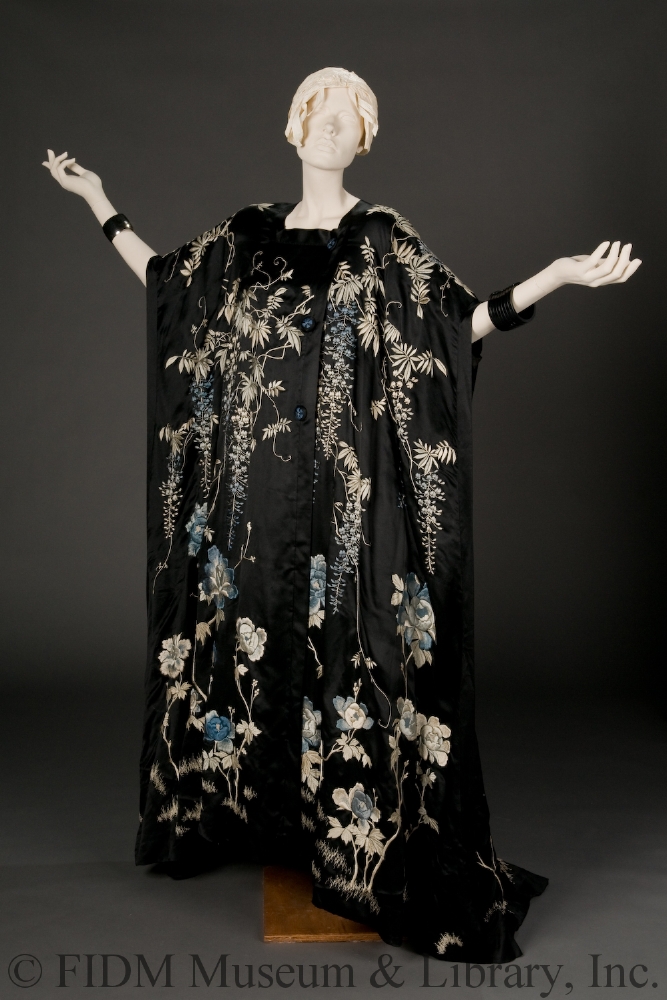 For a while, these artistic dresses were only worn by women of the movement and were perceived as grotesque by women outside the group.5 Eventually the corset-less Artistic dress went mainstream as an indoor-only tea-gown, eventually making its way into the public scene. Beginning in the 1910s, wearing tea gowns outside the home became a more widely accepted practice, though still very avant garde. Designers like Mariano Fortuny borrowed from the kimono in his designs. Thanks to the kimono, the female body was not limited to small movements anymore.6 The image above, featuring an embroidered dressing gown, clearly demonstrates the freedom of movement available to women who wore Artistic-style garments.

Back to Gernreich and his agenda with his Kimono dress. Whether intentional or not, the Kimono dress carries a lineage of liberating the female body and continues its legacy. Gernreich's Kimono dress is unfitted, with an adjustable belt at the waist, and short enough to allow for easy movement. As fashion scholars have noted, "dress carries moral and political meanings."7 This is exemplified by the appropriation of the Japanese kimono in the late nineteenth and early twentieth century, and continues with Rudi Gernreich's designs of the 1960s and 1970s. Gernreich's Kimono dress promotes functionality and simplicity, through which women's bodies were freed, ultimately decreasing the gender gap.

Interested in seeing other examples of Rudi Gernreich's politically-informed designs? See more of his work here.