Participating in international Museum Week gives us an opportunity to connect with our audience and tell behind-the-scenes stories about our favorite objects. Today’s Museum Week theme is “stories;” in honor of our upcoming Art of Outstanding Television Costume Design exhibition, we decided to present a gloriously glamorous film costume designed by a man known as Hollywood’s historian: Walter Plunkett. 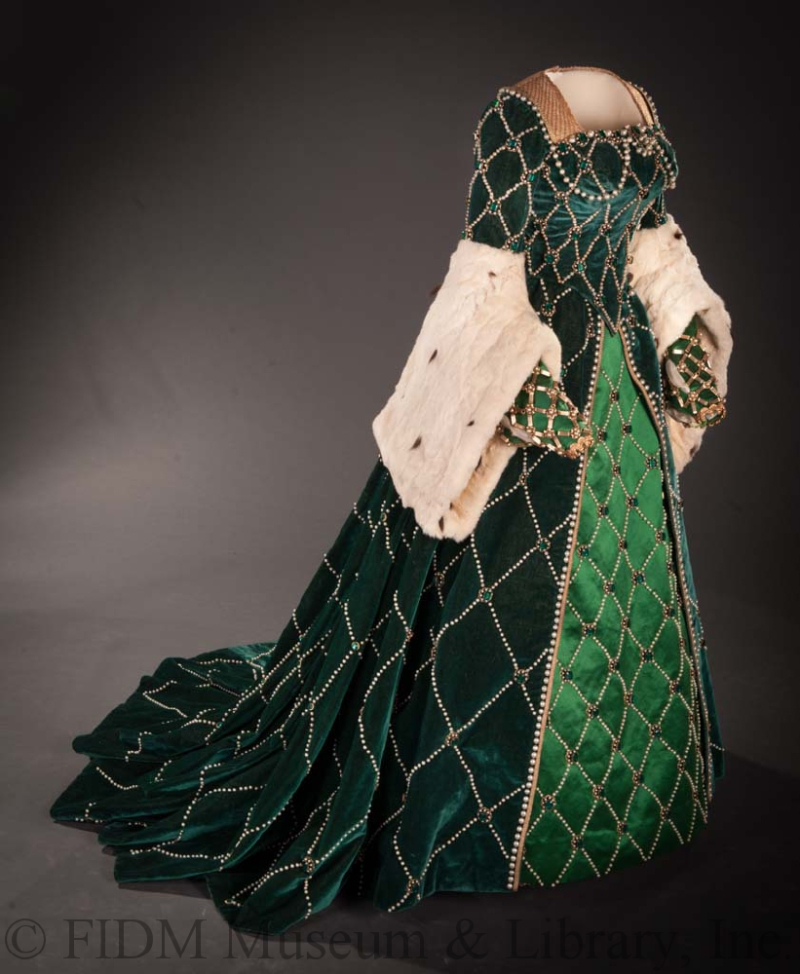 This velvet gown was worn by Marisa Pavan as Catherine de Medici in the 1956 film Diane, which told the story of King Henry II’s affair with Diane de Poitiers in the sixteenth-century French court. Its regal credentials are fitting, as it was donated to the Museum by a member of Hollywood royalty. Maria Cole, wife of singer Nat King Cole, purchased a number of costumes at MGM’s infamous 1970 auction; she bought costumes that were once worn by friends, including Pavan, Ava Gardner, and Grace Kelly. In 2005, she donated a selection of these ensembles to the FIDM Museum to complement our significant Hollywood Costume Collection. In a happy coincidence, costume collector Larry McQueen found a hair and makeup screen test photo of Pavan in the costume, and generously donated it to the Museum. Both the costume and the photo were displayed in our 2014 exhibition Designing Hollywood: Sketches from the Christian Esquevin Collection. 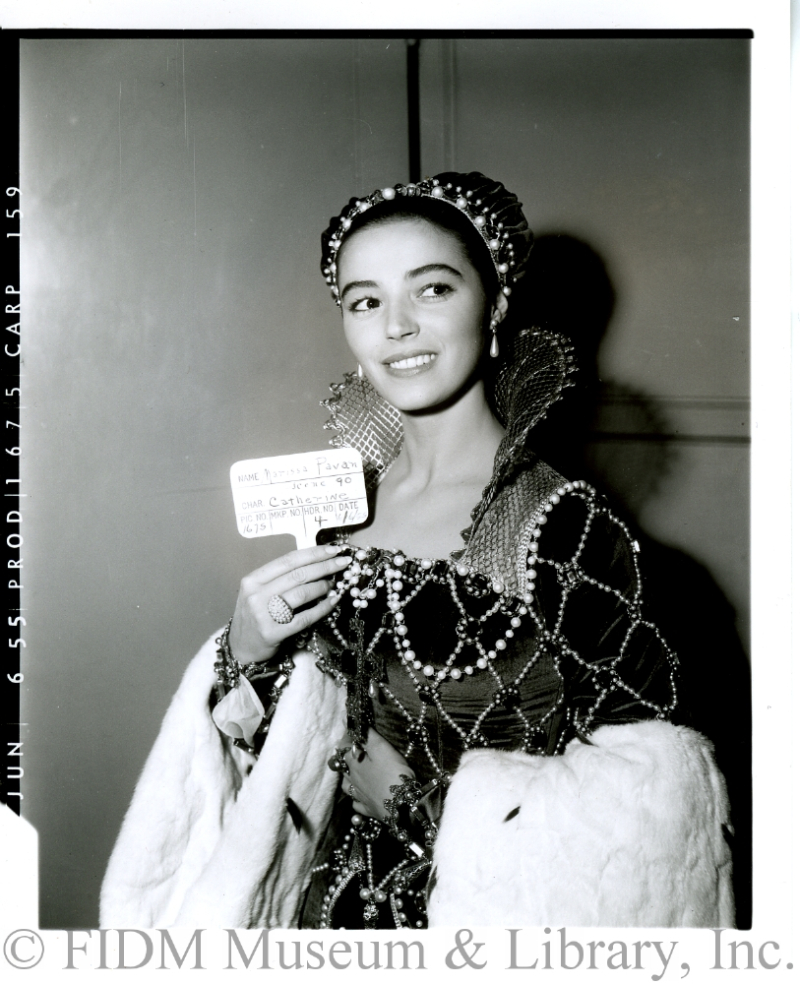 Walter Plunkett, the costume designer for seminal films such as Gone with the Wind and Singin’ in the Rain, worked primarily in the historic film genre during his long career. Whereas many designers were overwhelmed by the enormous effort required to coordinate historical costumes, Plunkett relished the research and creativity required of the challenge. Though Hollywood’s Golden Era historical costumes are now considered anachronistic, it was typical practice at the time to combine period accuracy with contemporary fashion ideals. For example, Plunkett’s films set in the early modern era, including Diane, consistently feature bodices that accentuate the bust using well-placed seams and darts. This low-cut gown mimics a square sixteenth-century neckline, but the bust is lifted and prominently displayed, reflecting the popular 1950s silhouette for women. 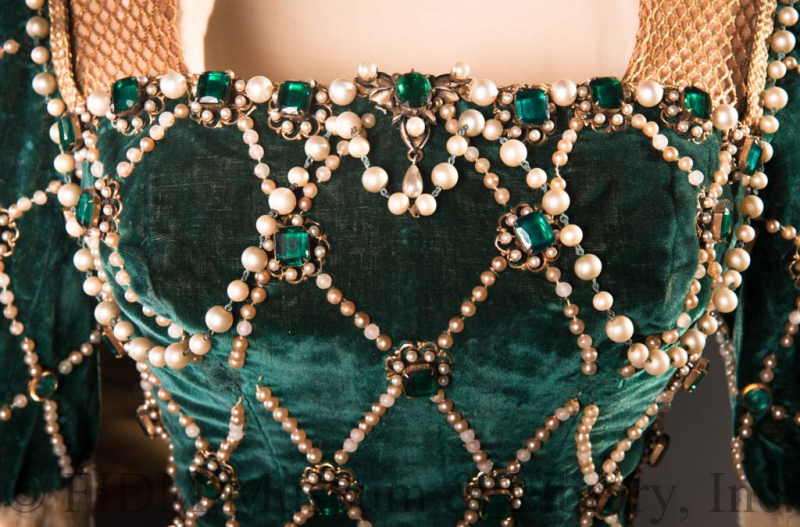 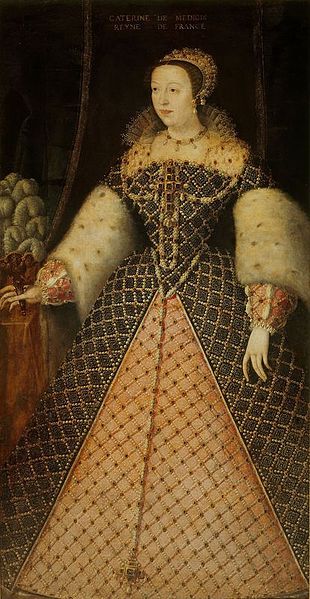 Plunkett once remarked that when doing a biographical film, he “tried to exactly copy paintings or photographs, because I don’t think one should imagine different clothes than the ones that a person wore.”[1] He turned to portraiture for his designs for Diane and her rival, Catherine de Medici. Although he fastidiously recreated what attire he could see in the paintings, Plunkett also acknowledged the necessity of interpreting these images for a modern audience. He considered paintings a starting point; he would then “soften”[2] the extreme elements of period dress and add a blend of modern design components. Plunkett earned a reputation for his perfectionism and scrupulous research, yet he recognized that “the most historically accurate costume may not be the most theatrically effective costume on camera.”[3] No matter how authentic, costumes that distracted from the story rather than complementing it were ultimately a failure. 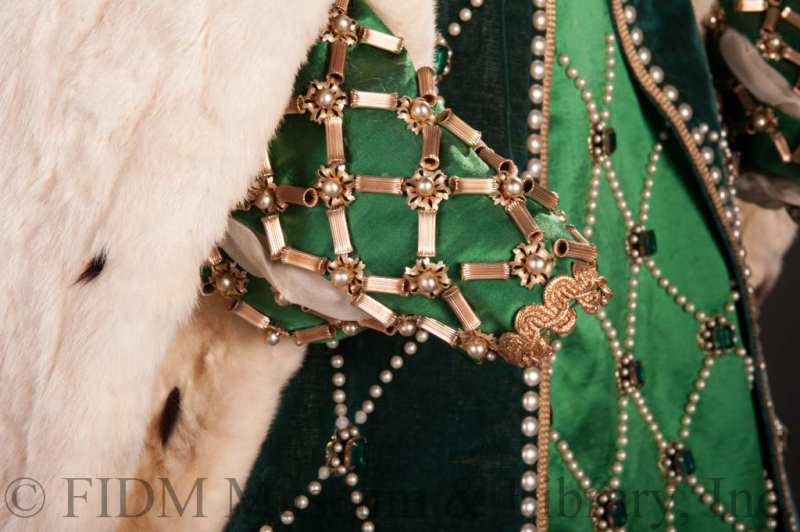 In order to meet the budget for Diane and still replicate the lavish aesthetic of the period, he enlisted a manufacturer to produce faux jewels and utilized discarded fur coats for the extravagant sleeve cuffs and linings.[4] Early modern costumes he had previously made for Young Bess (1953) starring Jean Simmons were repeated in the background scenes of Diane – a stylized French hood from that film is also part of the Museum’s Hollywood Costume Collection. In later years, Plunkett readily admitted that Diane was “perfectly dreadful,”[5] but he was fond of the costumes and considered them some of his best. 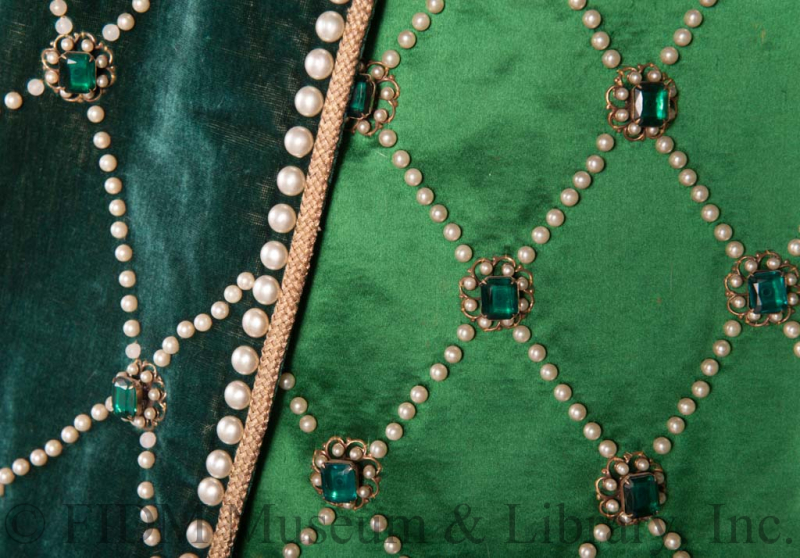