Lots of designers start from scratch every six months or so, moving with the trends. Not Bonnie Cashin. Every season she adds a little to what has gone before–some new colors, an experimental shape. Nothing invalidates her previous season’s clothes.1

In her search for the “simple, elegant solution” to dressing, American designer Bonnie Cashin (1907-2000) developed a singular vision focused on practical wardrobes for busy, active women.2 With an emphasis on uncluttered, clean lines, easy fit and functional details such as large pockets, Cashin’s garments were designed with practicality, comfort and warmth in mind. Despite this quest for comfort, many of Cashin’s creations were modern before their time.

Born in California, Cashin spent her early years working in a series of dressmaking establishments owned by her mother, Eunice. The skills Cashin acquired at her mother’s side led to successive positions as a theatrical costumer, both in Los Angeles and New York. By 1937, Cashin’s costume designs had brought her to the attention of Carmel Snow, the legendary editor of Harper’s Bazaar. With Snow’s assistance, Cashin became the head designer for Adler and Adler, a New York based coat and suit manufacturer. Cashin designed for Adler and Adler until 1942, when she returned to California as a contracted costume designer for Twentieth Century Fox. Cashin remained at Twentieth Century Fox until 1948. During her tenure at the studio, she costumed at least 30 films, including Anna and the King of Siam, A Tree Grows in Brooklyn and The Snake Pit.

Cashin returned to New York City in 1949 and opened Bonnie Cashin Designs Inc. in 1952. From this point on, Cashin’s aesthetic solidified into that which we recognize today: uncomplicated clothing for women on the go, fabricated in unusual materials. Cashin is perhaps best known for her extensive use of leather and suede, which she used as both trim and textile. Her use of leather and suede came about because of a collaboration between Cashin and Sills & Co., a New York leather goods manufacturer. Working for Sills & Co, Cashin designed garments made entirely of suede and leather and also garments made of wool, canvas or jersey with the smallest amount of leather trim. From 1962, Cashin also worked as the designer for Coach, where she applied the solid metal fasteners that would become associated with her name and the Coach brand.

As an avid traveler, Cashin was deeply interested in a wardrobe that could be adapted to a variety of climates and situations. Thus, she developed a system of layered dressing, which resulted in a modular wardrobe that could be mixed and matched at will. A Cashin “five-layer outfit” from 1970 consisted of knee-length pants worn with boots, layered under a hooded jersey dress, and a leather skirt, all topped by a wool coat. For additional warmth, a wool mantle could be added on top.

The two wool coats pictured here are excellent examples of Cashin’s aesthetic. Inspired by the two-dimensional qualities of Asian garments such as the kimono, this style of unfitted coat was called the “Noh” coat. Roomy and warm, Noh coats were intended to be worn over other garments as part of Cashin’s layered wardrobe. 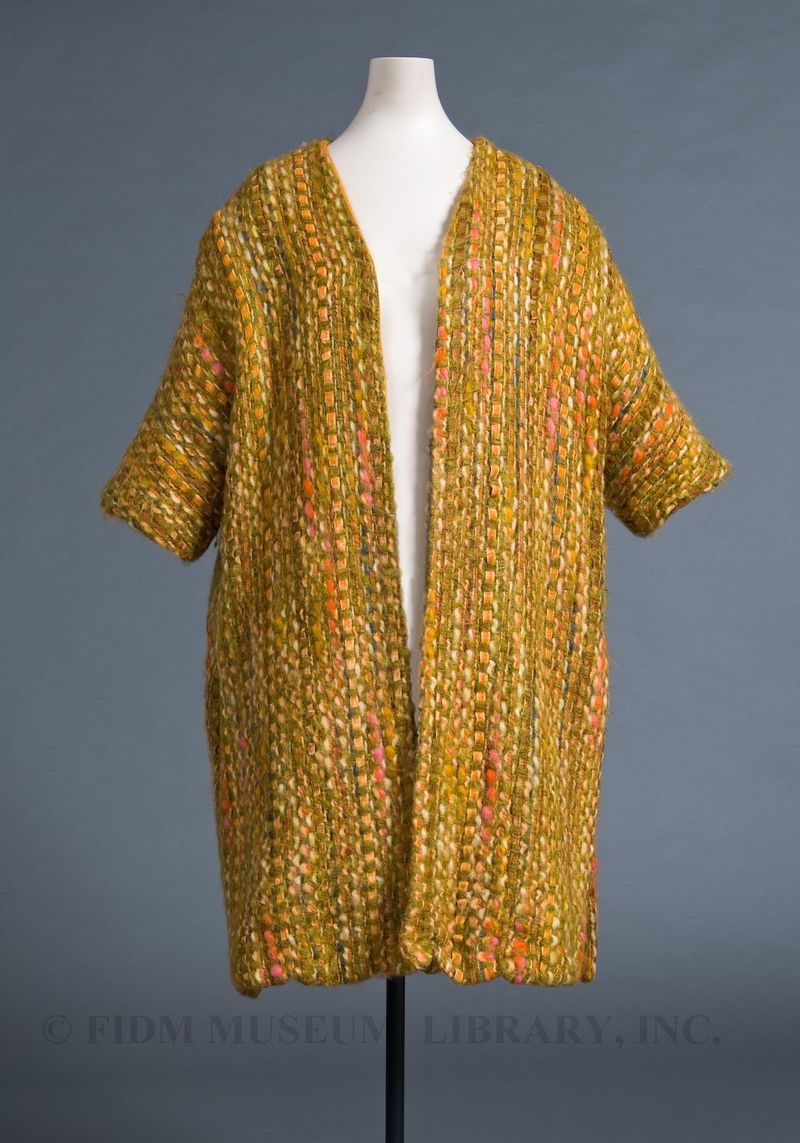 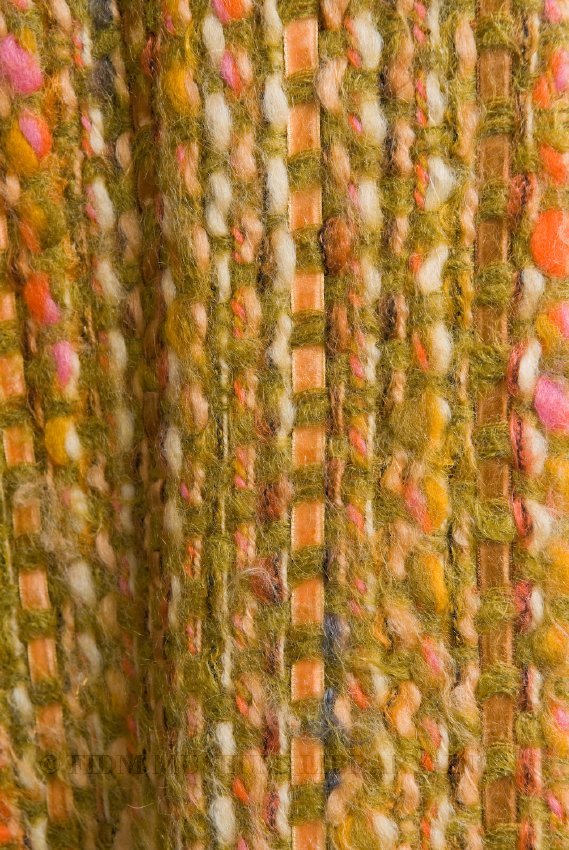 Looking closely at the image above, you’ll notice velvet ribbons interwoven with the wool yarn. This textile was designed by Scottish textile designer Bernat Klein, who introduced “ribbon tweed” in 1964. Klein’s novel weave was a sensation and appeared on runways and in fashion editorials throughout the mid 1960s. Beginning in 1964, Cashin worked as the designer for the Scottish company Ballantyne of Peebles. This position required Cashin to spend at least part of each year living in Scotland, where she probably encountered Klein and his textiles. This coat was featured in a 2006 article on Bernat Klein and his textile designs in the Costume Society of America publication Dress.

The image below features a classic example of the Noh coat in woolly brown and black mohair, trimmed with black leather binding at hem, cuffs and collar. Certainly warm, the coat could be layered over other garments as part of a versatile, layered wardrobe. As fashion critic Bernadine Morris noted in 1968, “women buy Bonnie Cashin’s clothes because they are cozy and comfortable, not because they bowl people over. In a day when most fashions seem stamped out by cooky cutters, hers look as if they had been touched by human hands.”3 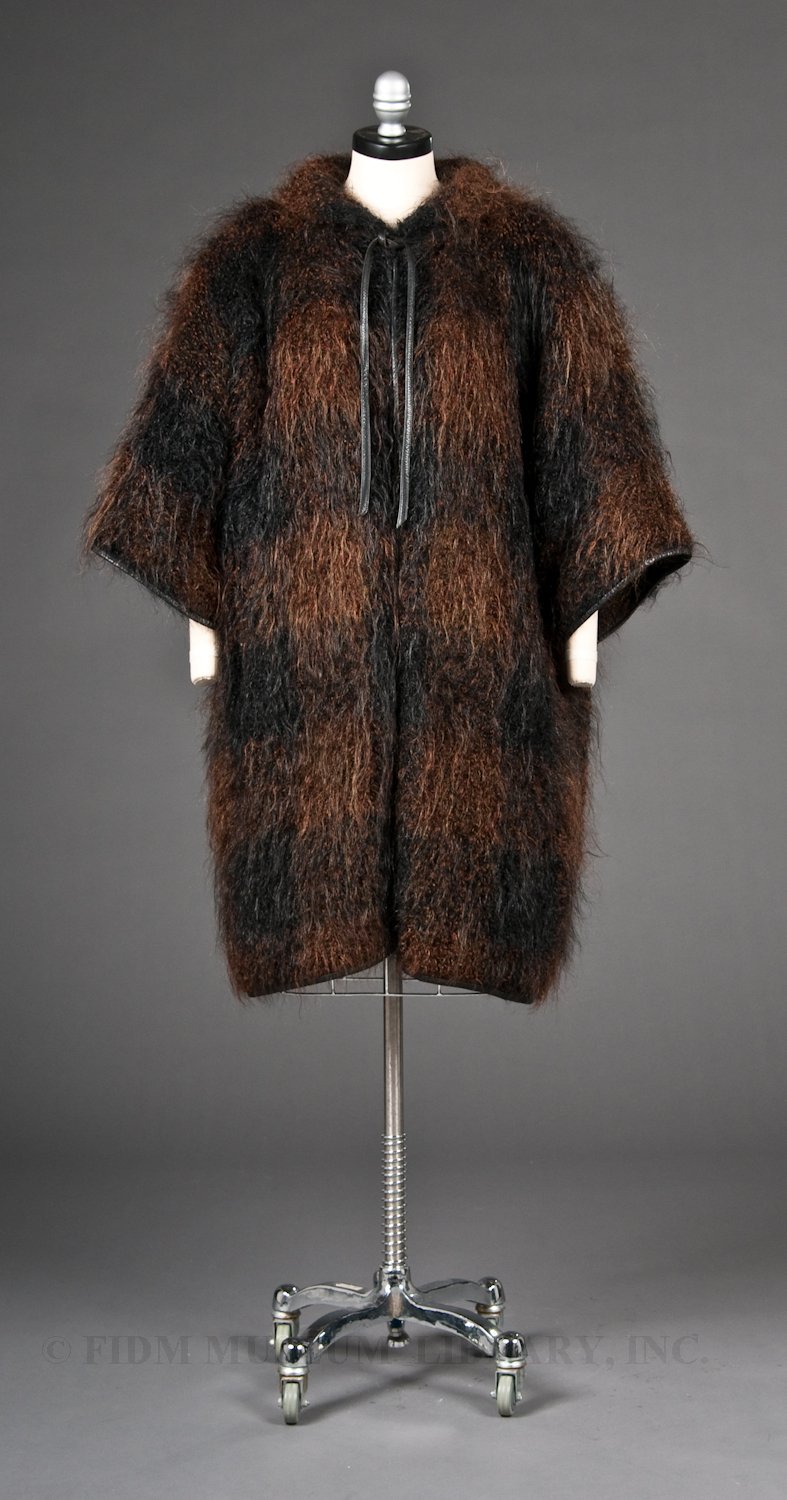 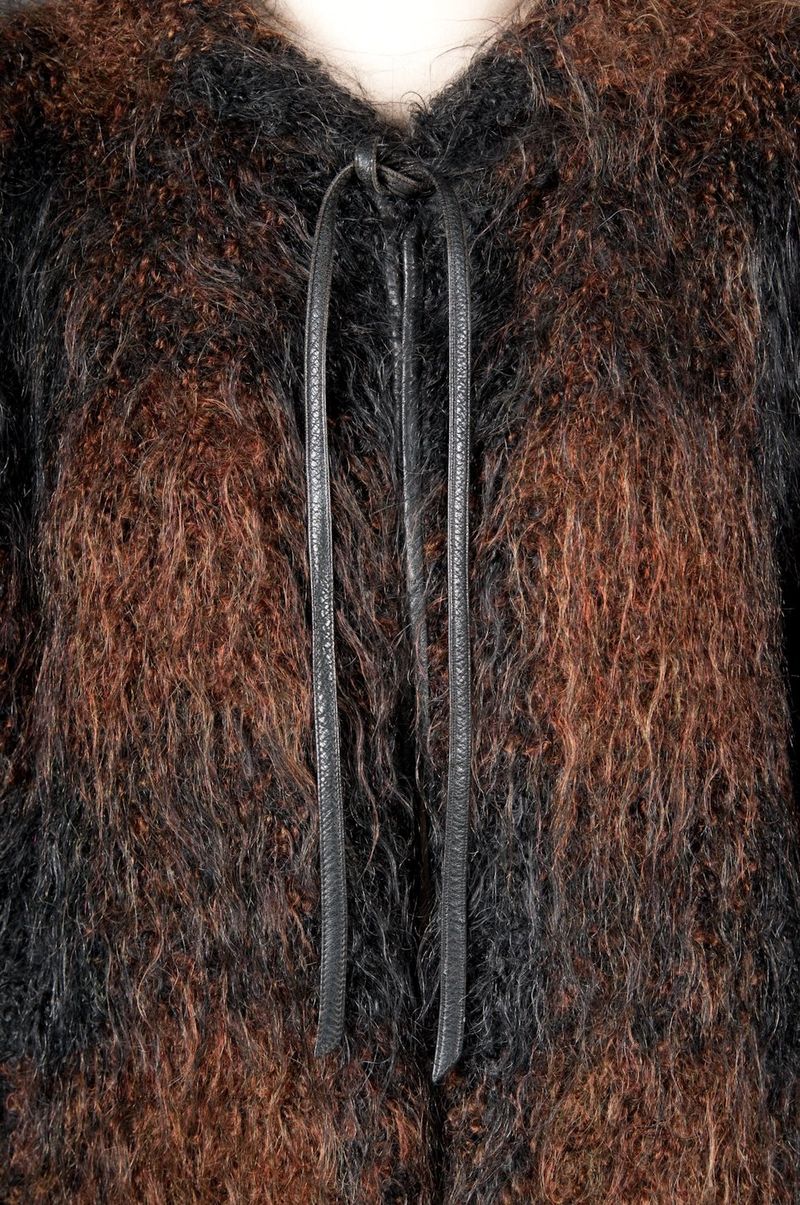